This December is polar opposite - pun intended - from last December and you're about to see why real soon. The arctic blast next week and at the beginning of week 3 has been well documented and talked about. A poleward ridge in the WPO/EPO domain will displace arctic air from the North Pole and drag it south into Canada. I've mentioned we need to capitalize on this cold air with a snow event because the pattern is at jeopardy of turning mild again, though latest guidance is encouraging for delaying a potential switch back to above normal. Dates of interest for a potential snow event have been the 12th and again between the 15th-18th. Now that the 12th is a few days away, models have honed in on a piece of upper level energy they feel could bring us our first widespread snow event of the season.

The EURO & GFS show a piece of Pacific upper energy entering the country early Sunday and working its way to the Midwest region. As it gets closer to the east coast, it enters a favorable environment to strengthen and at the surface develops several "waves" of low pressure along the gradient line. To put it simply, the thermal gradient is between an area of cold air (High Pressure or PV to the north promoting northerly flow) and warm air (High Pressure to the south or east promoting southerly flow). Along the thermal gradient, intense "lift" in the atmosphere allows moisture to develop around a wave or several waves of low pressure. A potent jet streak over New England and 500mb upper energy - the aforementioned piece ejecting out of the Pacific - are the remaining ingredients which are critical in developing these types of storms.

Let's take a look at the main differences between the EURO & GFS models at the 500mb level. 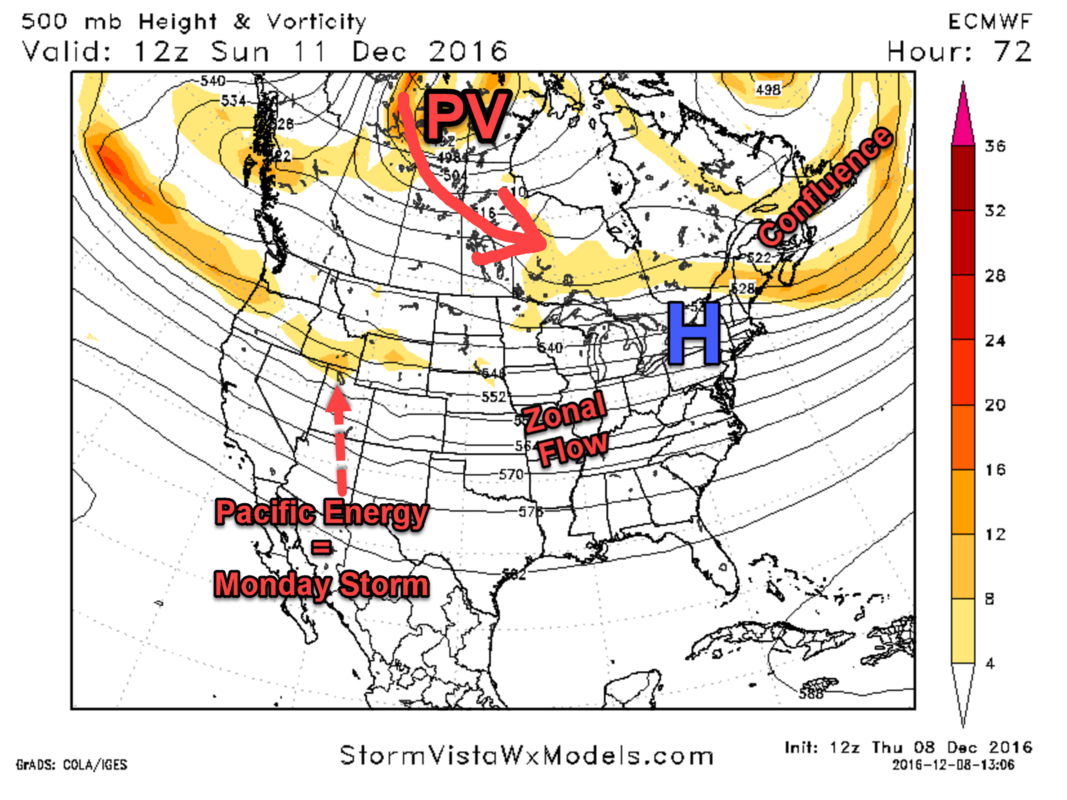 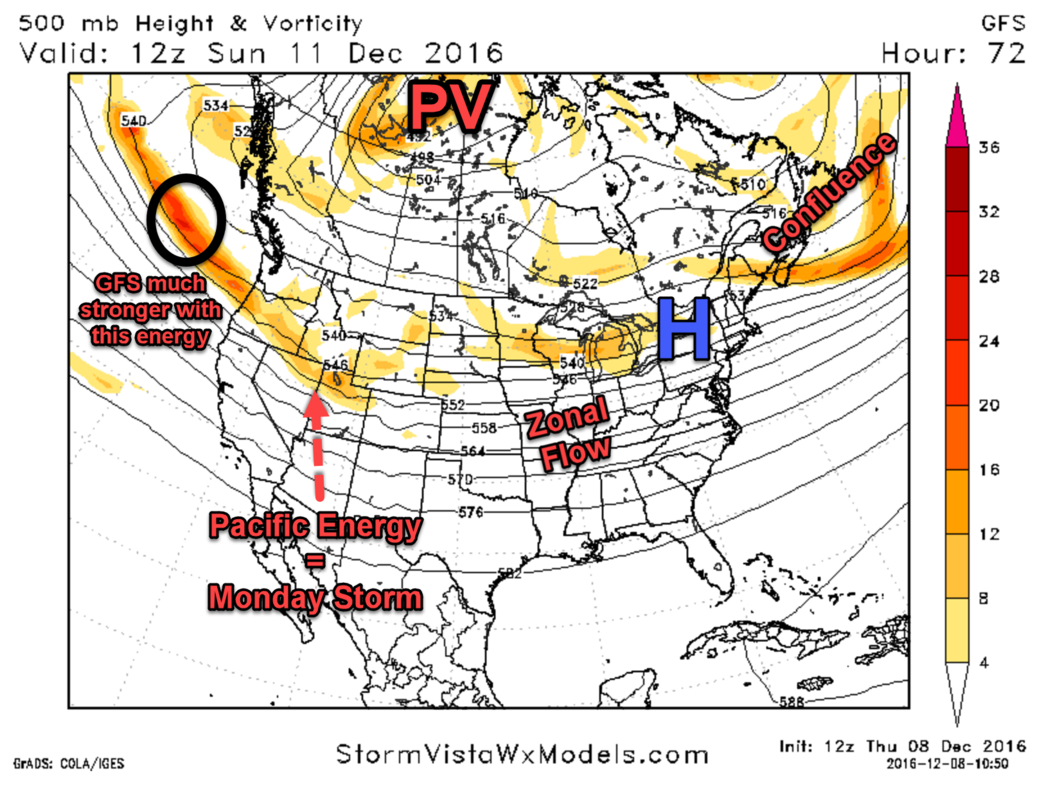 The essential difference between these two models early Sunday is the way they handle the Pacific energy coming onshore. The GFS is much stronger than the EURO with the trailing energy (circled on GFS image), which means the overall flow across the country is not as flat. The reason this is important is because if this energy digs too much into the Pacific Northwest, it will allow heights to rise over the east coast and the storm on Monday would have a good chance of tracking to our west. That would mean mild temps with rain. The EURO is weaker with the trailing energy, so the leadenergy takes a more easterly track instead of northeast toward the Great Lakes.

The lead energy is important and will ultimately determine the outcome of our weather on Monday. The weaker the lead energy is, the higher the odds are it tracks over or south of our area instead of north-northwest of us. Of course, there are other "drivers" and "enhancers" in the atmosphere that will determine this outcome. For one, there will be an area of High Pressure over the Northeast early Sunday that will split into 2. One piece will move into eastern Canada while another, the stronger piece, stays due east over the western Atlantic. Then there is the PV (Polar Vortex) in western Canada digging additional upper energy into the CONUS. Both these features are identified on the maps above. 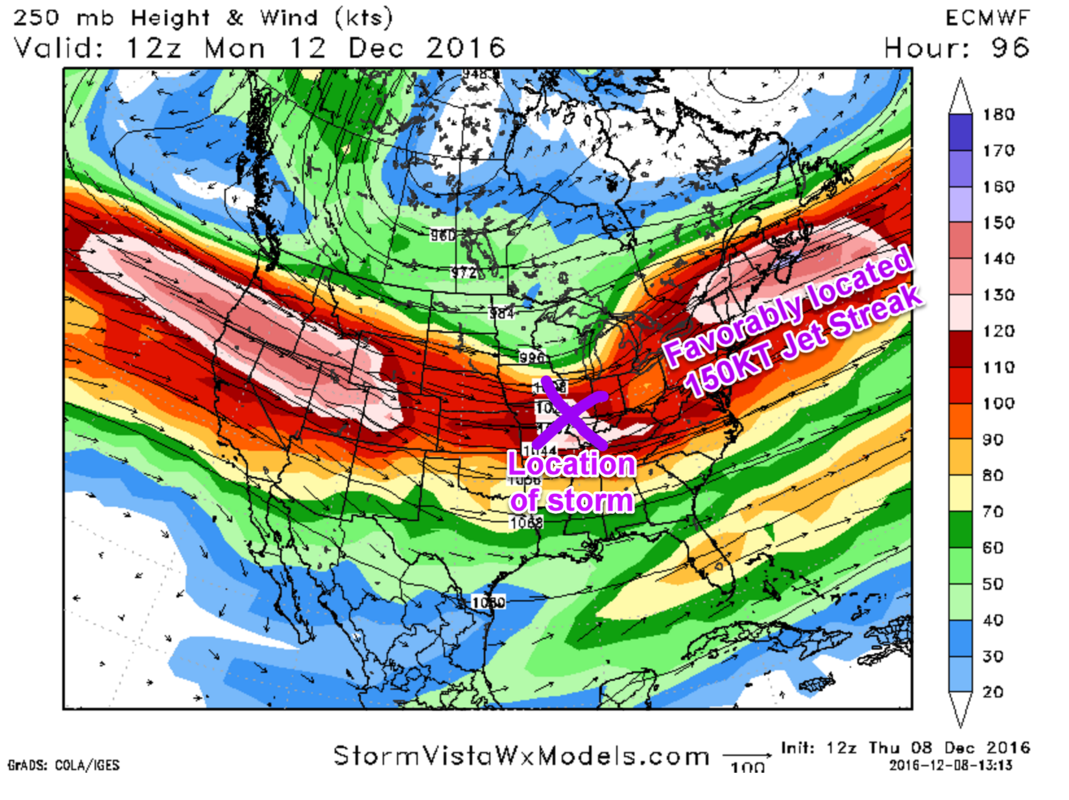 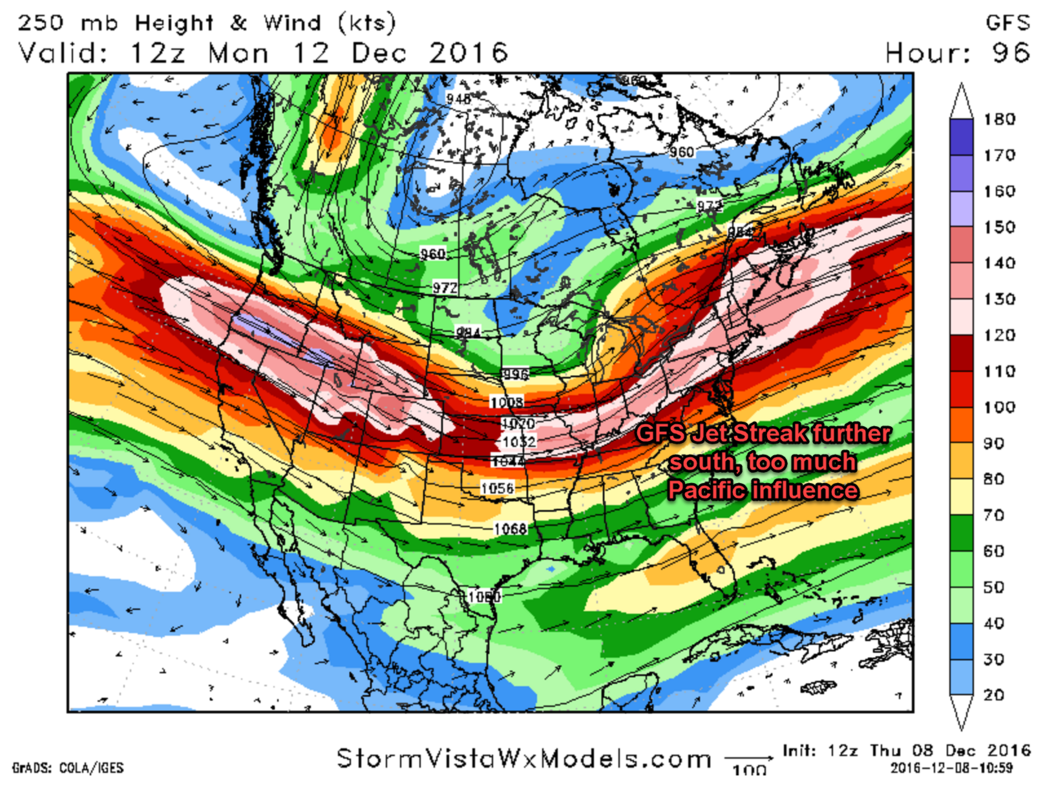 In addition to the areas of High Pressure and the Polar Vortex, another essential piece to determining the outcome of this storm will be the 250mb jet streak. On the EURO, notice how it's arched over New England at a speed of nearly 150KTs. When the jet streak is positioned north of 500mb upper energy, it usually signals strengthening vorticity due to the dynamics at play. On the GFS, the jet streak is also very strong but positioned unfavorably which actually helps develop a surface low pressure system and tracks it into the Great Lakes. Look how the strong upper winds connect all the way into the central and western portions of the U.S. The EURO on the other hand fails to develop an organized low and sends a wave of energy into the northeast while cold air is still in place. 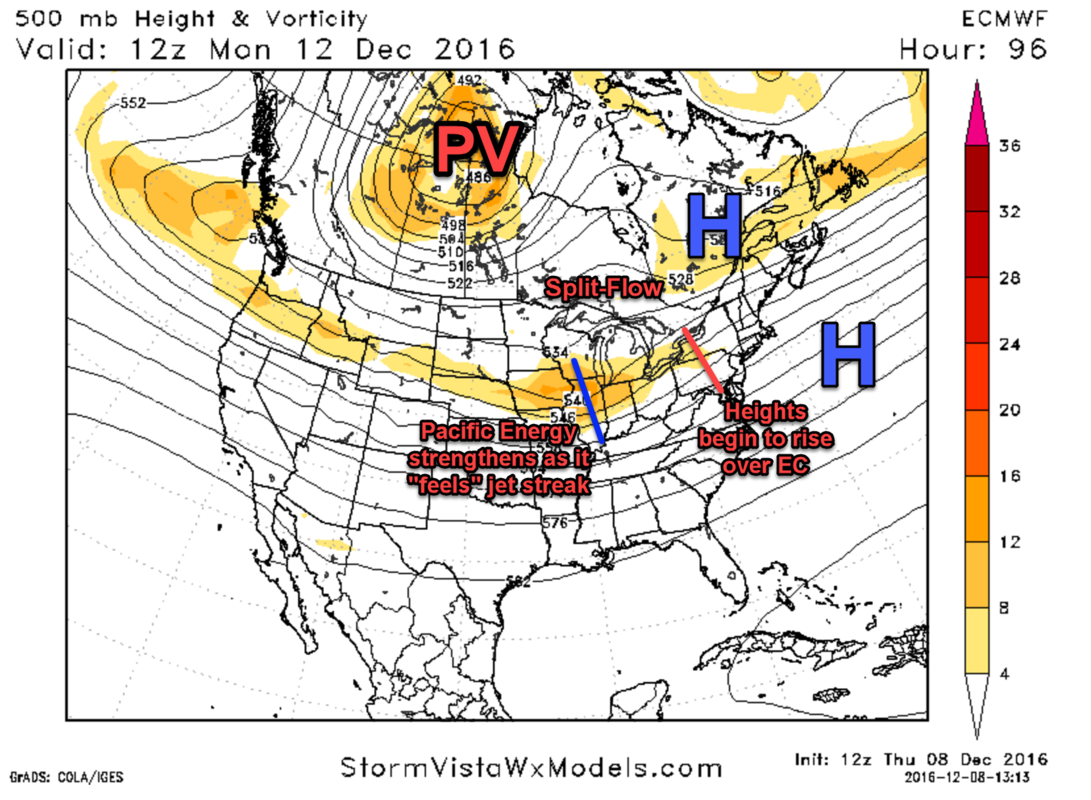 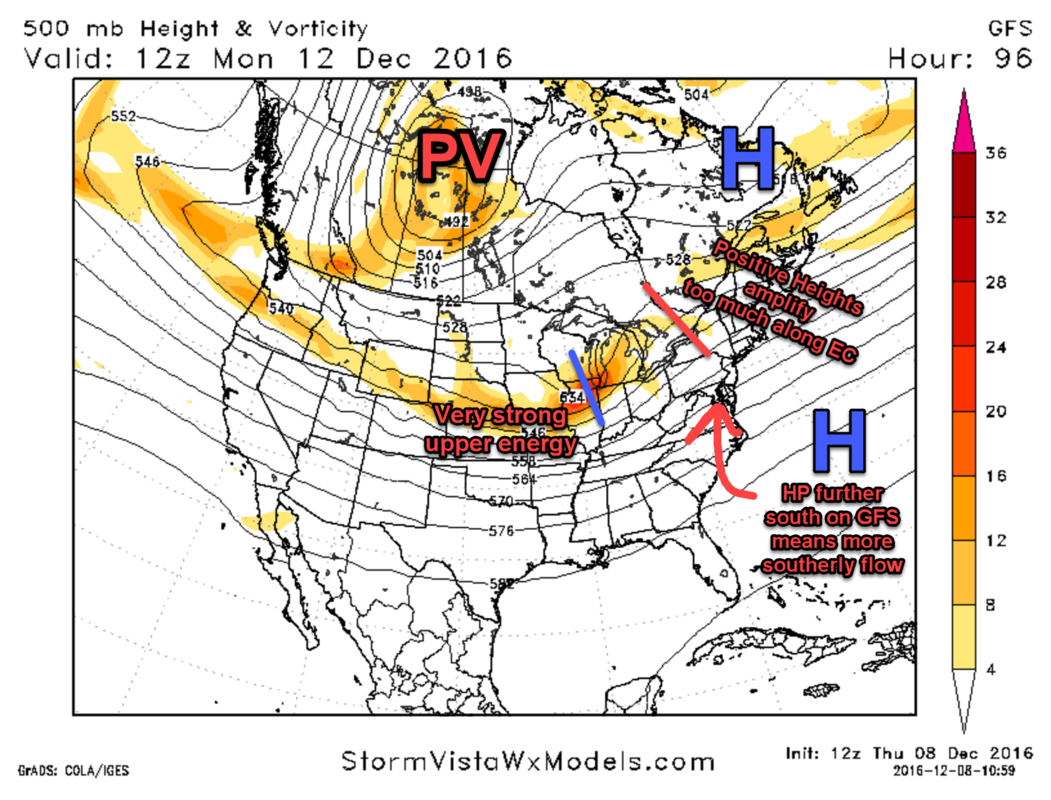 Fast forwarding to Monday morning, the GFS has upper energy tracking into the Great Lakes which allows mild air to overtake our area and keep precipitation in the form of rain. Not only is the 500mb energy too strong, but the High Pressure off our coast is situated further south than where the EURO has it. Notice how the EURO is weaker with the Pacific energy, has a split-flow look north of it thanks to the separation between the High Pressure and PV, and has the High off the east coast at or slightly north of our latitude. These nuances and slight differences in location of various forces in our atmosphere play a huge role in how the storm on the 12th behaves. 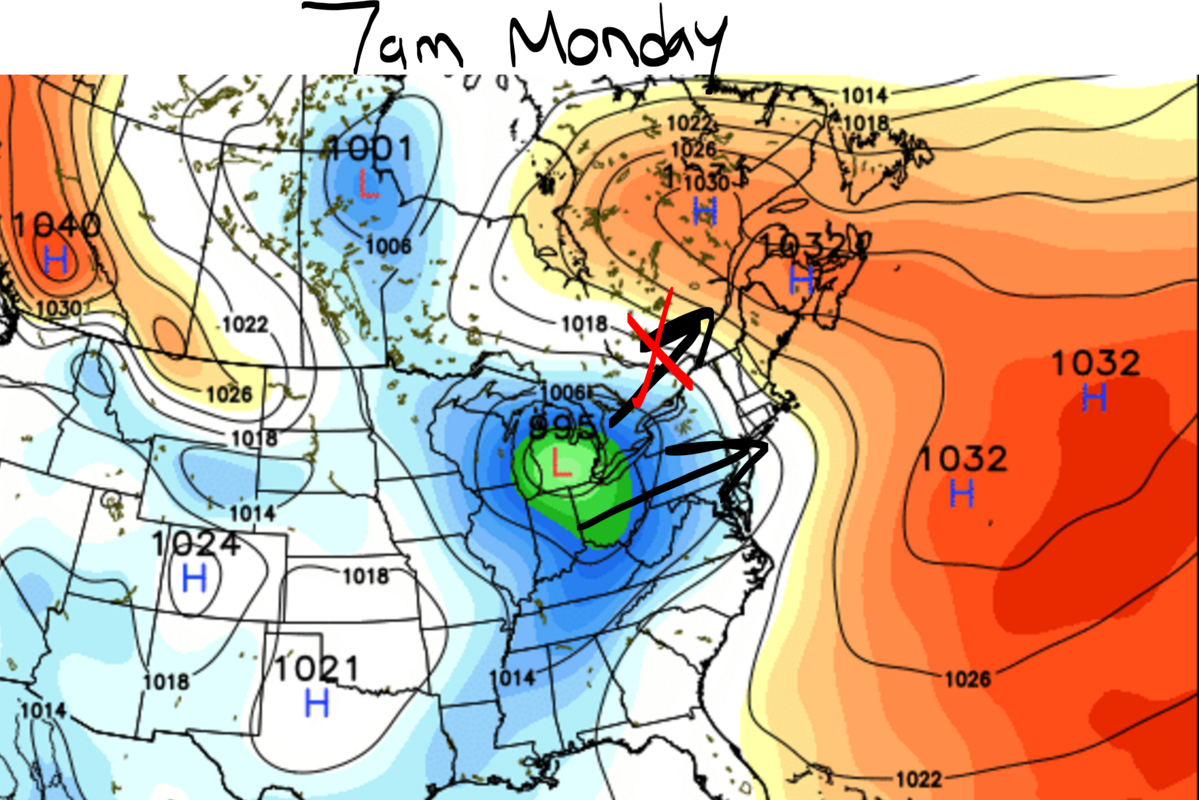 Here is a clearer look of the MSLP - Mean Sea Level Pressure - Monday morning. Where those High's are located and the intensity of the low to our west will be the features to watch closely among others. 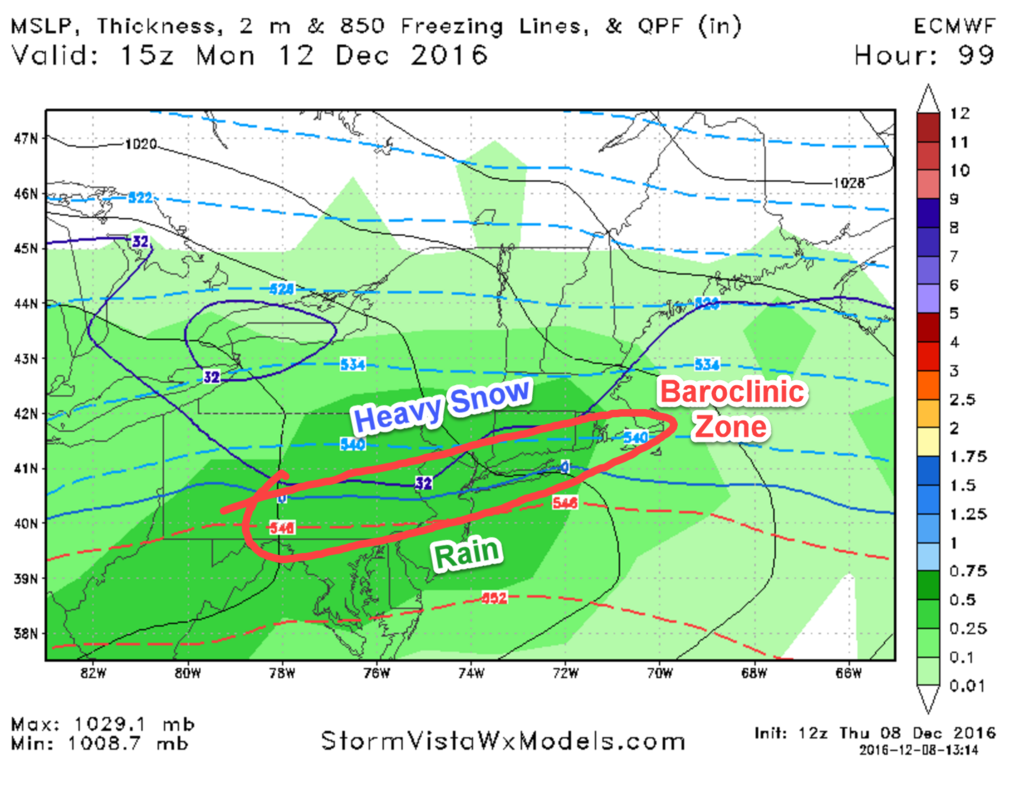 The EURO valid 10am Monday shows the potential impacts this storm could bring to the area. If an organized area of low pressure does not form, and we're dealing with waves of energy along the baroclinic zone, there is a good chance enough cold air remains in place from central NJ on north to keep precipitation in the form of snow. Those just north of the gradient tend to see the highest snowfall rates because that is where the best 700mb lift is. If we can get the cold air to press south more, that would push the gradient further south and put more people in a safe spot to see accumulating snow. This can happen if the High does not retreat as far north as models currently show, or if the Pacific energy takes a slight east-southeast track though that looks unlikely at this time.

EURO Ensembles Probability of seeing at least 3" of snow 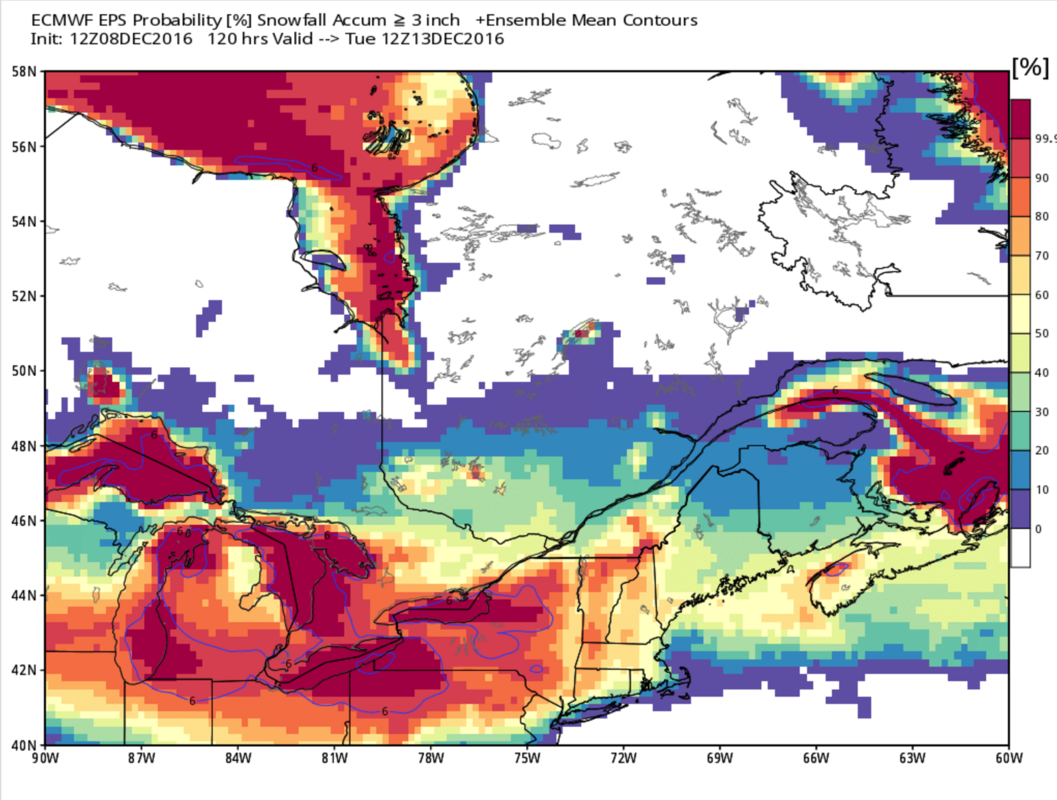 EURO Ensembles Probability of seeing at least 1" of snow 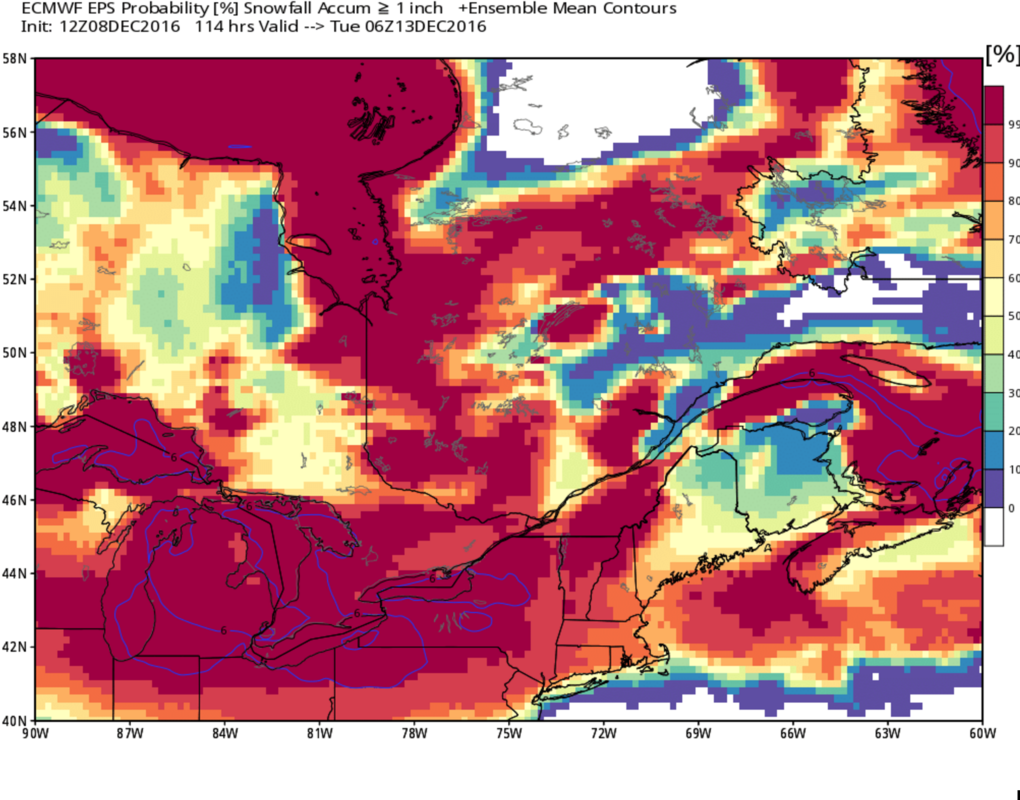 At this time, I am not really favoring one solution over the other because the Pacific energy is not properly sampled yet. I will say I am a little concerned the PV in western Canada presses south too much, which could cause too much phasing with the Pacific energy and allow heights to rise over the EC. Models are not showing this but I think it's worth calling out because of the intense ridging northwest of the PV (WPO/EPO ridge). That said, it's also possible the PV has more SE movement instead of S which would help keep heights flatter across the East Coast. Given the differences in modeling it's still too early to say what will happen but I figured it was important to highlight the scenarios that are at play. If all goes right, a significant snowfall is possible for the area of at least 6". If all goes ok, a light snowfall is possible for the area of 1 to 3." And obviously if all goes wrong we'll end up with mainly rain. Areas N&W of NYC are in a much better position to see accumulation snowfall given the nature of the storm. I honestly feel a minor snowfall event is a lock for those folks, possibly even moderate.

I will issue a 1st call snow map sometime Friday.

Have a good night.

Nice discussion, Frank!! I found it really enjoyable because you saw things that I didn't even think of haha gonna be interesting to see how this plays out!

Nice read Frank. You covered it all and I could understand it the way you present it without getting to technical Thanks. I know what to expect or not. This might be the start of a very interesting start to the rest of the month