The eruption was from under the water. I looked up 146 teragrams that equals the estimated displacement of water. In gallons: 1219429049997 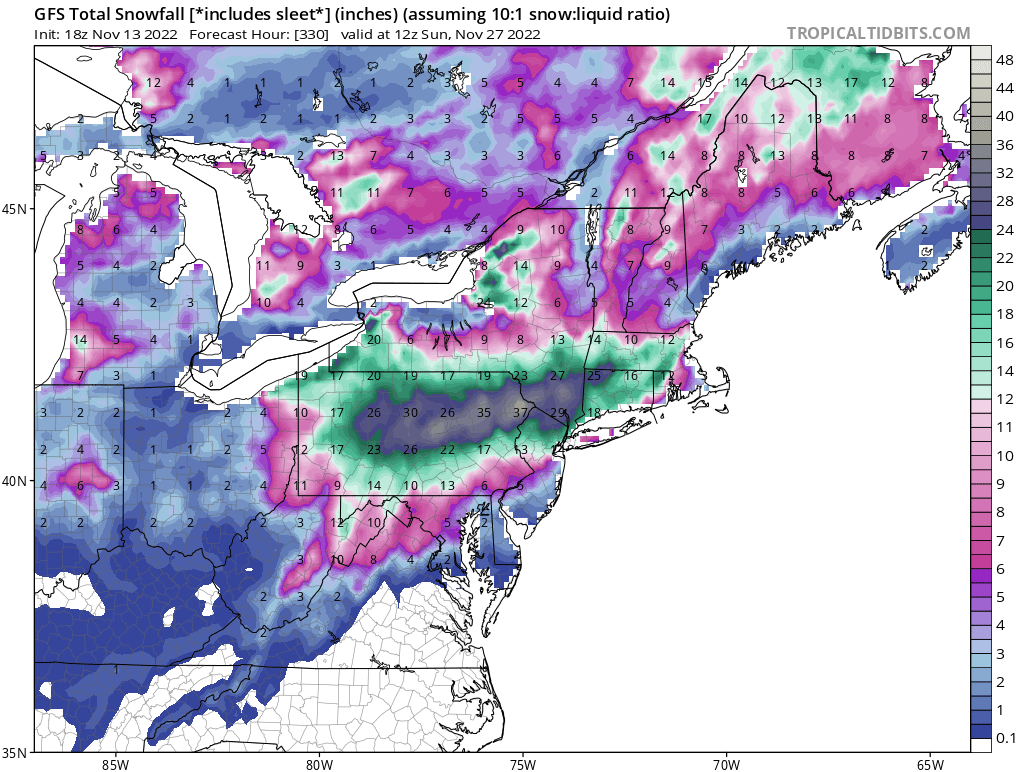 There is def a big storm signal from 24th to 27th time frame.

Greenland and NH Snow as per Rutgers lab is above normal, read th Cumchaktka regions snow an dice cover has a relation to the PV being wobbled, weakend and aids in splits. Time will tell.

NH Snow mass above the mean as well

My son is at Univ at Buffalo.

And I would have moved away with this one:
https://www.wcvb.com/article/a-look-back-historic-storm-brings-8-feet-of-snow/8122557

Great to hear from you! Did you relocate to upper NYS or are you still in NEPA? And either way, did you get any snow yesterday? 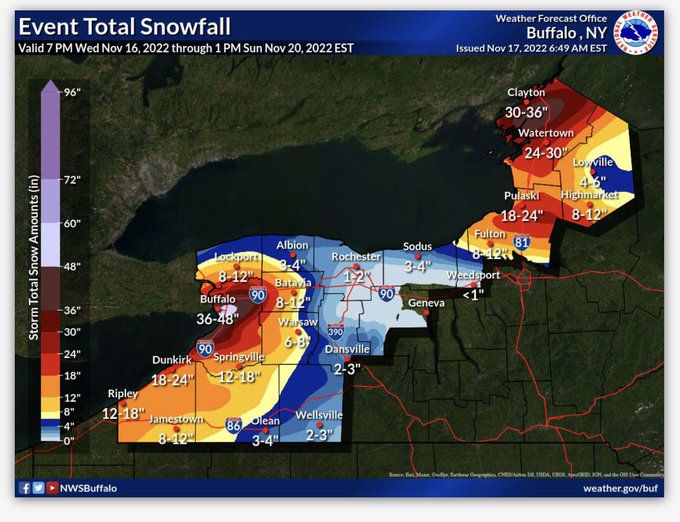 My son got home from Buffalo last night. He will miss the storm

This is amazing - EXTREME wx (is ramping up?)!

Reports of six inches an hour snowfall rates.I have seen 3 to 4 inch rates and that is spectacular, can't imagine 6!

docstox12 wrote:Reports of six inches an hour snowfall rates.I have seen 3 to 4 inch rates and that is spectacular, can't imagine 6! 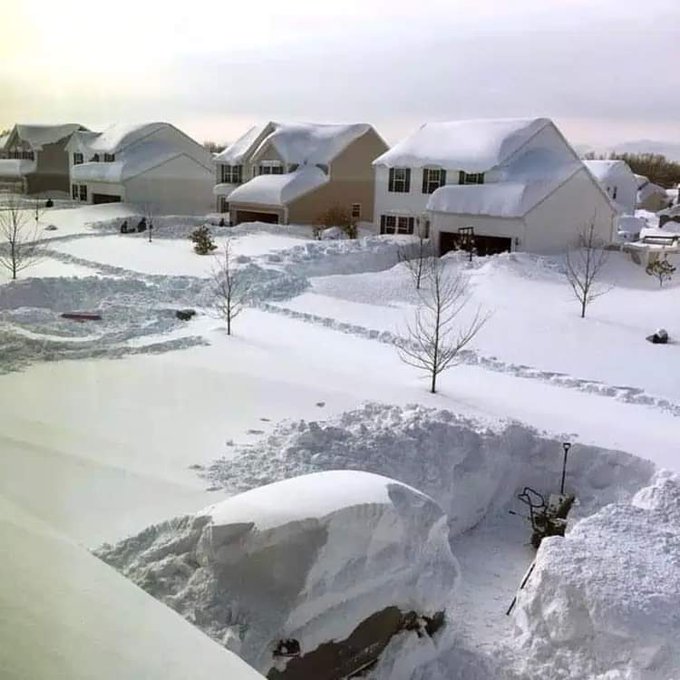 He's gonna hate when the plow comes thru. Where's he gonna go anyway?

The wind seems to be blowing like 10 mph not every day but any. I remember Nov 2000, my second Nov in the Hudson Valley. 19 99-2000 was a cold, snowy winter which for me was a shock. I had to buy four snow tires. Coming back to Nov 2000, I was amazed how the wind kept blowing and how it got so cold and then we moved into our house in Jan 2001. That for me was a cold Jan to Apr and snowy too. 2013-14 was worse. Unusually cold and some wind and after Thanksgiving the bottom fell out for Dec into Jan through April 11 when it finally got to 34. Leaves on trees were behind some three weeks but somehow by the end of May 2014, they’d about caught up. Jan 2015 winter came back hard for the rest of the season.

Now it feels like Nov 2014 again. I “feel” a hard winter just about here. I must be getting old to reminisce like this.

My GF in 2002, to be wife, moved into a townhouse in Monroe NY in mid December 2002.We had the Christmas Eve rainstorm that turned into snow.Fort Lee where I was at the time, had about 11 inches, pretty much the same in Mahwah where I lived but when I visiited my GF soon after, they had 18 inches with nice drifts up in Monroe.There was that amazing 36 inch snowstorm that CP will remember, heavy rain in the B City,Mahwah had about 10 inches of sloppy wet snow.When I drove up to Monroe, there was well over 40 inches OTG as there was a foot before the 36 inches fell.I never saw so much snow in my life.She moved into a new home in March 2013 and a heavy snowstorm hit the day of the closing.14 inches fell but Mahwah had only 3 or 4 inches.First Thanksgiving there was a 9 inch snowstorm.There were in subsequent years, a 26 inch storm I think March 2018 with a few hours of 3 or 4 inch rates and a 25 inch storm a few years ago.
Where I lived in Mahwah 35 years, the heaviest snowstorm was 21 or 22 inches, the Feb 1983, Jan 1996 and Dec 2010 come to mind.Just a little distance North and 300 feet higher has a big effect on snow production.Very glad I have been here full time since Sept 2014.

heehaw453 wrote:Going out about 10 days on the EPS.  That's about my limit for ensembles h5 analysis.  Kind of like what Mugs has been showing.  This projected pattern is zonal and with NAO blocking storms tend to slide underneath the area.  However, as long as the PNA stays a bit negative you won't get big amplified storms most likely and not arctic express to drive cold air in right to the coast.

So my thought is NW of I95 have some chances, albeit modest ones in beginning of December and the coast will probably need to wait for the PNA to allow deeper cold air into the area.  Maybe on/after 12/10 for coast.  If we can get NAO blocking to assert itself and just a bit of cooperation from the PNA then we'll have an active December for tracking.  December snows have been rather elusive for the most part especially along the coast for past several years, so it'd be nice change of fortunes. 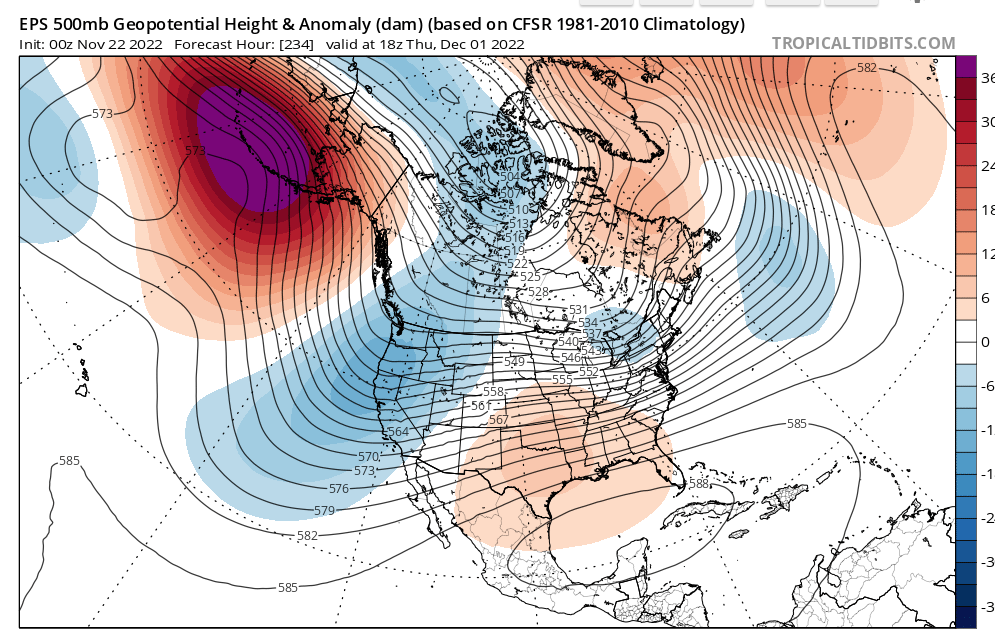 I cant say I disagree at all with the ideas between now and Dec 5th-7th.  That said after that time frame, reading between the tea leaves as we head out beyond the 5th or so, is really encouraging IMHO; setting the stage for a cold temp anomaly regime for a decent amount of time in the eastern half of the CONUS.  Its starting to show itself in the means.  This End of run EPS is drool worthy with a neg EPO and neg NAO on the table here pushing the trop PV around the Hudson Bay.  This exactly where you want that gyre spinning sending pieces of polar energy south to play with energy coming out of the SW sub trop and or Pac jet.  GEFS similar.  That said its all at the very end of the time frame so Im tempering all expectations at this time frame.  But again reading the tea leaves(STAT forecasts and Trop forcing's) its encouraging none the less.   Regarding the thoughts on the -PNA I would have to agree thata -EPO alone often times isnt enough to set the stage for the coastal plain as this tends to favor amplification of energy too far west which amplifies the WAR out ahead.  That said IF and thats a big IF we can get that NAO to cooperate it offers the necessary resistance to push back with cold air over the NE.  For now we sit back and enjoy the Thanksgiving holiday and hope the GMEN!! can beat the Cowgirls Thursday.

See, you had me at hello...I mean until the bolded garbage about the pretenders beating the Boys. First of all, that ain't happening, Dallas is a way better team and the point spread is showing it. Secondly, Dallas is getting some home cooking, "Giant" Turkey being served up on the Star!

Lol Irish. I love the chirps. But that’s what I’d expect from a Cowgirls fan whose team is built to be a decent regular season team but choke in the playoffs. That’s really got to be horrible to have those expectations each year only to be let down year after year.  To be honest I’m not sure how you haven’t jumped ship yet. First Tony Romo, and now Dak a combined playoff record of 3-8. Pretty sad if you ask me.

Now the GMEN. Pretenders?  No. Overachievers?  Ahead of schedule?  Perhaps.  But you can clearly see there is a shift taking place in the NFC East. The Cowgirls time is fading my friend. Fading fast.

All chirps aside wishing you and everyone else on the board a very Happy Thanksgiving. Enjoy the time with family and friends.

Thanks,Doc, same for you and your family and the entire board of wonderful people.We should start a betting pool of who takes a nap first after turkey dinner today,lol.

Happy Thanksgiving everyone enjoy your day

Happy Thanksgiving! Hope everyone gets to enjoy this beautiful day, nice to be able to cook with the windows open!
_________________
Janet