Welcome to the final update of 2K17's first Godzilla.

This is a sounding from the 18z GFS that shows instability in the air mass, which could lead to periods of thunder-snow tomorrow.

The latest radar is showing impressive convection gather in the south ahead of the main surface low. With convection also sitting offshore, this storm has a ton of energy to work with.

The GFS, along with other guidance, concentrates the heaviest banding over NYC Metro. The surface low pressure is expected to 'bomb' out as it approached the 40/70 BM. As it does so, the dynamics from the upper level jet structure is going to put this region under snowfall rates of 2-3" per hour at times during the day Thursday. Visibility will drop to zero.

500mb closes off on some guidance, but 700mb is definitely likely to close off. Incredible frontogenesis, or lift, is going to enhance snowfall rates AND also try to slow the storm down once it gets near the BM. This is why models are showing greater snow amounts today. The storm is not expected to move as quickly as it once did. Temperatures are going to crash very quickly. 850mb winds are expected to be in the 40-50mph range, locally higher along immediate coast. This will help temperatures drop below freezing. Ratios will start out 10:1 then gradually rise to 12:1 by mid to late morning Thursday. Higher ratios are expected for far N&W areas.

Here is my final call: 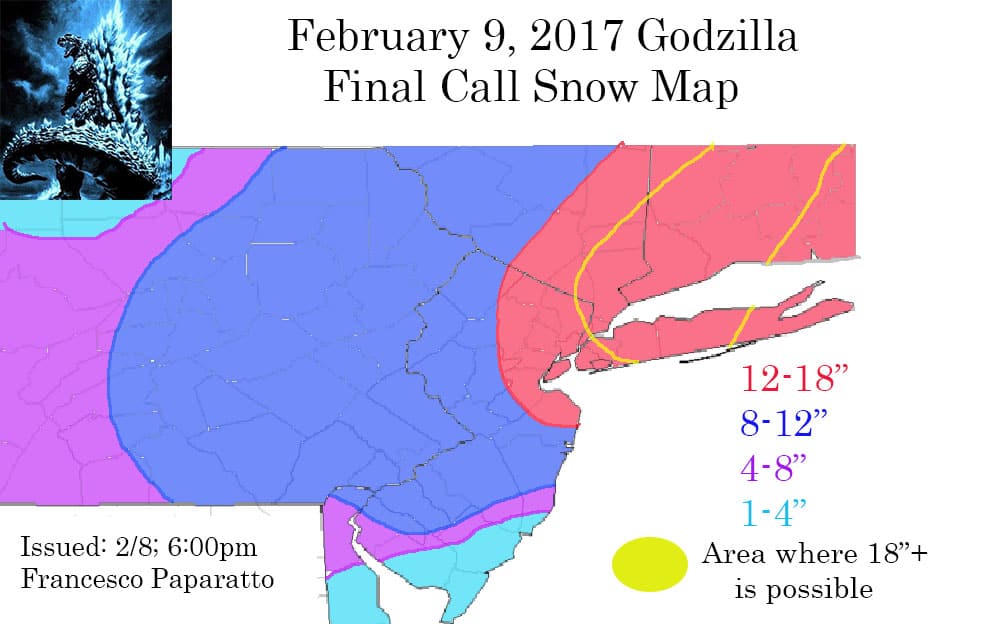 Where the heaviest banding sets up is a nowcast situation. Some models, like the NAM, are dead-set on a dual jet structure which develops two convective bands from NEPA to southern NY and another from CNJ to LI. This is possible but I leaned against it for now, only because the overall flow remains progressive and other short range models do not really show it. However, if it does set-up then some areas in NEPA and southern NY could see in excess of 12" of snow since you have ratios working in your favor.

Lastly, the gold box. This is where I feel the jackpot will be. Someone within this gold box could see near 2 feet of snow. A Roidzilla. Most likely you'll be in the 18-23" range, but who knows. The storm will slow down, H7 will close off, and incredible convective bands will stream in off the Atlantic. The outflow of this system is going to be incredible!!

Woohoo, me and all amoung others are in the jackpot zone!! Sorry to hoot and hollar but dayumm frank this is exciting, zero visibility! Thundersnow, this is go be incredible. No way the busses in yonkers will be running, too many hills.

too many people trying to get on

WOWWWW!! Are you serious! Its been a few years!

WOWWWW!! Are you serious! Its been  a few years!

Did you guys see what happened north of bposton with the ice, 55 car mash up, video of cars spin all over, 2000 flights canceled!

jmanley32 wrote:Did you guys see what happened north of bposton with the ice, 55 car mash up, video of cars spin all over, 2000 flights canceled!

also a train at the LIRR derailed this morning and a few hours ago..they are already a mess without snow

Frank your map is awesome, not just cause I am in the best spot but because I agree with it completely, was how i pictured it, but did not think there b a yellow box. See you on later tonight, and thanks for all your hard work on this!

deBlasio must be setting up his reelection with this one

wow very bullish!
and I made it to the gold box!

by RJB8525 Today at 6:52 pm
deBlasio must be setting up his reelection with this one.

LOL but at least he is giving people time for alternate child care.