Positive feedback loop.....this is a continuation of the pattern, with a second block developing:

So Im going to start by stating I have a really hard time this time of year(or any time of year for that matter), when the pattern is transitioning from fall to winter in the N hemisphere, to take any operational run in the long range seriously at all.  Even the slightest error in the model within the first few hrs or days of the run results in the LR result eons from the actual truth.  That's why I much prefer to look at the ensemble means to see what the LR pattern might be hinting at.  Why look at one model run twice a day like the Euro, or one model run 4 times a day like the GFS, when you can look at 51 model runs at the same time multiple times a day?  In essence that's what we are looking at with the ensemble means.  So lets take a look at what the GFS, and Euro ensembles are hinting at.

Let me start by saying I am not impressed with anything that locks us into anything.  I will try my best to not use the term transient here because the back and fourth is what this time of year is typically about in the northern hemisphere.  So maybe the phrase...the pattern is locking into a transient pattern.... is more appropriate.  Or perhaps the phrase,...the pattern def looks like it is continuing to evolve to what we want it to.

One of the main drivers, if not the main driver, of the winter pattern over N America the last two winters has been due to the warm pool in the Gulf of Alaska(GOA).  This feauture will once again play a vital role in how the winter pattern plays out.  This above normal SST anomaly has led to a -EPO which means a trough sets up south of the Aleutian Islands, and a ridge complex establishes itself in the GOA and up into Alaska.  Down stream from this type of set up typically leads to a trough that digs into the CONUS.  But we have yet to establish that -EPO as of yet.  We have actually had a +EPO for most of Oct and Nov, and a trough centered over the GOA. 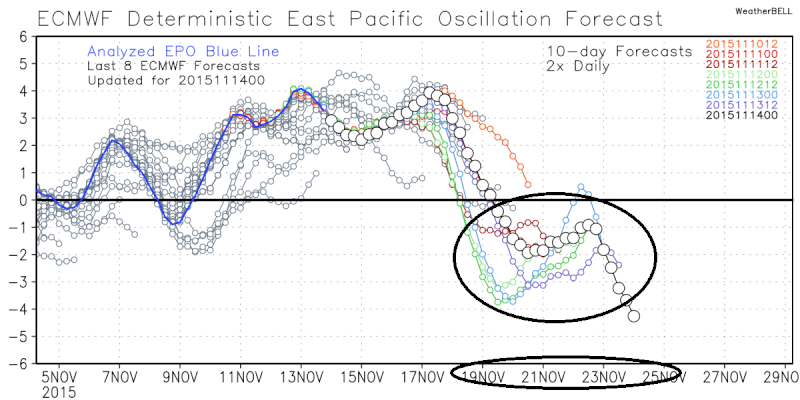 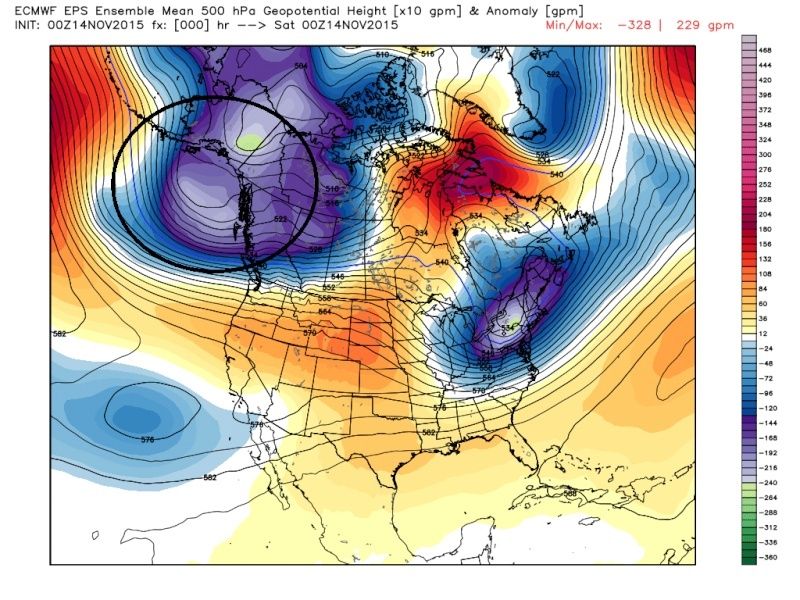 As a result of the trough centered over the GOA the temp anomalies in this location have been slowly cooling.  Here is the last 7day trend showing this, but in reality this has been the trend for about a month or so: 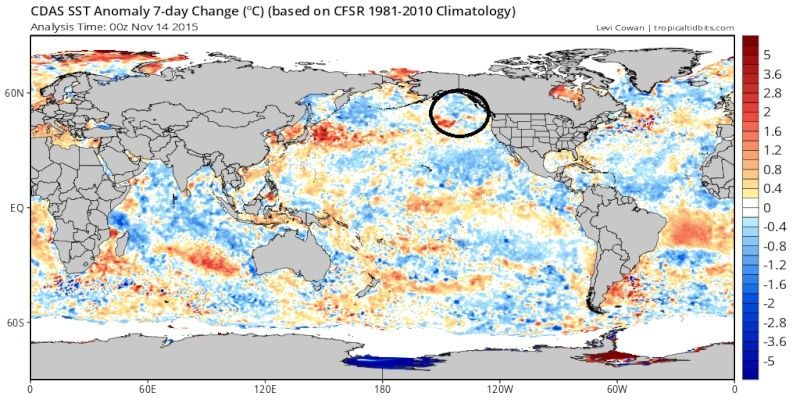 But don't worry.  For one the anomalies in the GOA are still above normal, and two where the pattern is evolving and this trend will hopefully/probably start to reverse itself, and the eventual establishment of a more consistently neg EPO.  As you can see from the image above the EPO goes neg by about the 19th-20th.  Just a neg EPO; however, will not be enough this winter because of how strong the El Nino is.  And the reason we are in such a warm pattern right is because of the strength of the Nino...right now.  The SE ridge is still very strong and will continue to push back as we try to get the cold air to push its way east.  But with each push the colder air gets stronger and stronger.  Take a look at this:  By day nine we are actually starting to see the development of a trough S of the Aleutians and the ridging into the GOA and Alaska on both Euro and GFS ensembles: 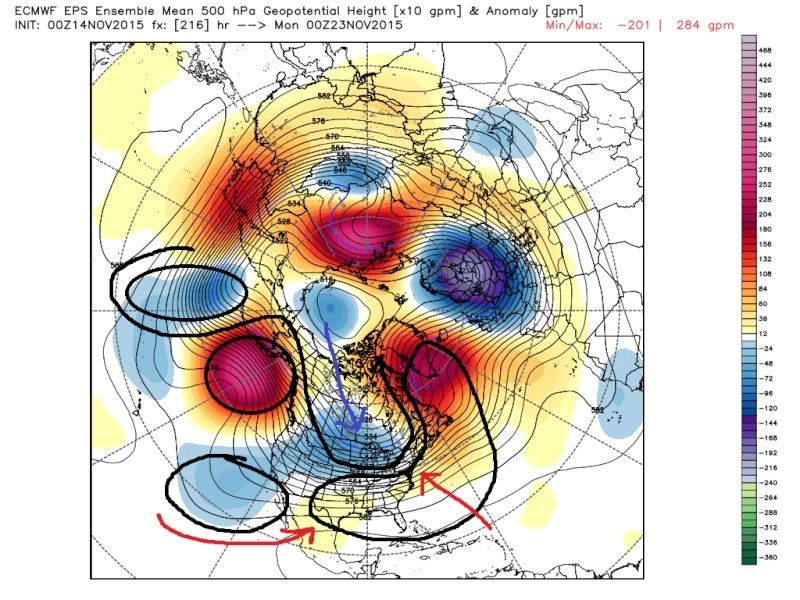 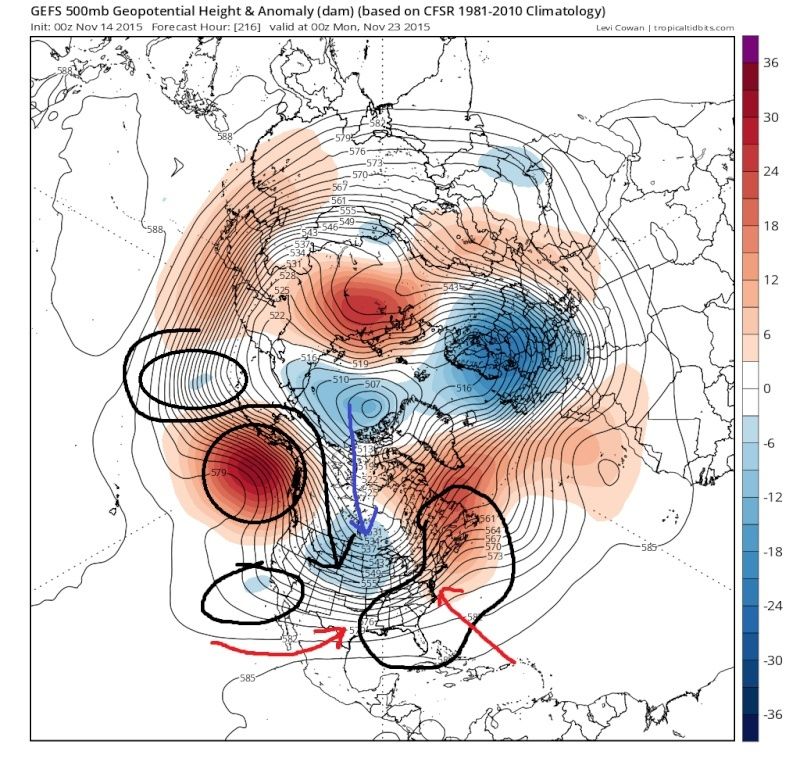 But as you can see that the SE ridging that has been giving us record warmth this month is still pushing back against the cold trying to infiltrate the CONUS despite the -EPO set up described above. The air mass still does not quite make it to the coast, and when or if it does we still get moderation of the temps as it does so with the SE ridge rebounding. But this is climatology, aka what happens this time of year with a Strong El Nino.  Keep in mind as we cont deeper into the fall and soon to be meteorological winter the cold air becomes stronger and stonger because this pattern suggests snow up into Canada which will lead to stronger and stronger cold air masses.  This is a known fact given the evolution of the time of year.  There will be no denying it.  What we will really need for this to lock in will be what Mugsy has been so adamant about.  And that's the forcing near the dateline.  When this really gets going it will feed the S Aleutian trough and lock it in place ultimately locking in the -EPO.  No guarantees this happens but that's the hope anyway.  I think the reason this is not happening at the moment is because the MJO has been locked into phase 3 because the Indian ocean is so warm and there is and has been a ton of convection there playing a huge role in the enhancement and placement of the Polar jet stream.  Just look at the convection: 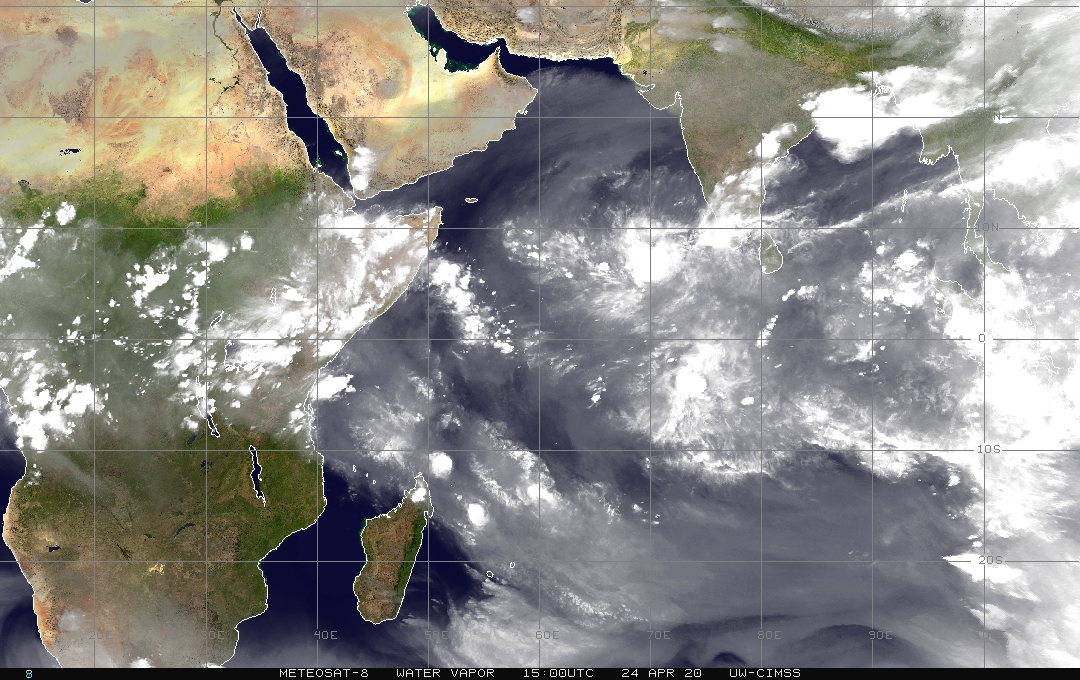 Excellent Doc! I think that Siberian and Canadian snow growth a la Mugsy's pet Rocky and the hoped for weakening of the El Nino and better GOA will all do the trick eventually.Don't see anything for this month but maybe late December will shift the gear.

Can we finally see the EPO and NAO go negative?

GFS and Euro still have the Thanksgiving storm

Who is ready for a cold TurkeY? 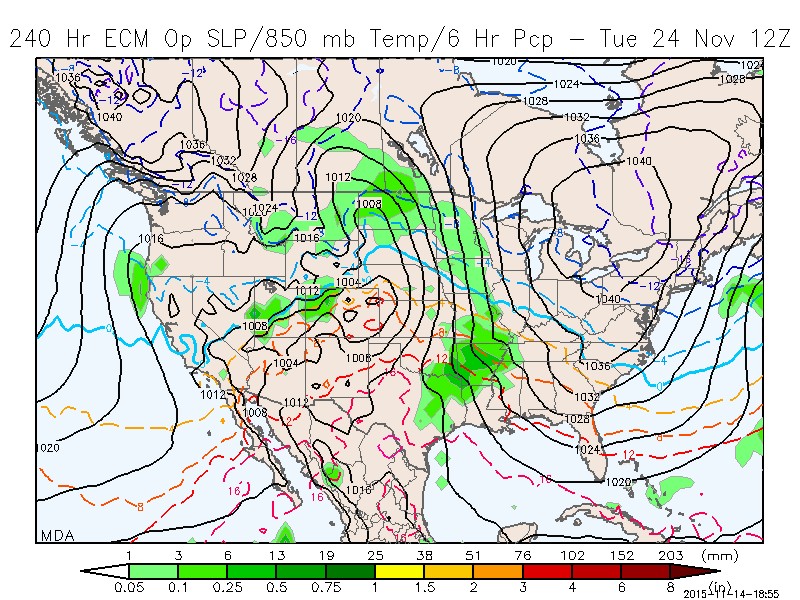 Sheesh how cold is that exactly? 18z gfs has storm after storm but most are offshore but as we know often these change drastically would b cool to have snow around thanksgiving.

@Snow88 wrote:Who is ready for a cold TurkeY?

well if you ever had thanksgiving at my in laws by the time they get everything out its cold lol. Much prefer my parents feast which is where I will be this year in ct.

ENS showing a good week of normal temps to below normal for the Thanksgiving week with the EPO tanking - IFFFFFFFFF that holds of course. Could be some snow showers and flakes flying then.

Temps highs in the low 50's and lows around freezing for the burbs and upper 30's NYC. To far out  though for even this discussion of  temps though. Lets take this one day at a time for this week and we go from there. Let's not rush this.

Check this out - talky about chaos my god!! Can you say TRANSIENT!

Looky see for another cold and possibly white Turkey day?? 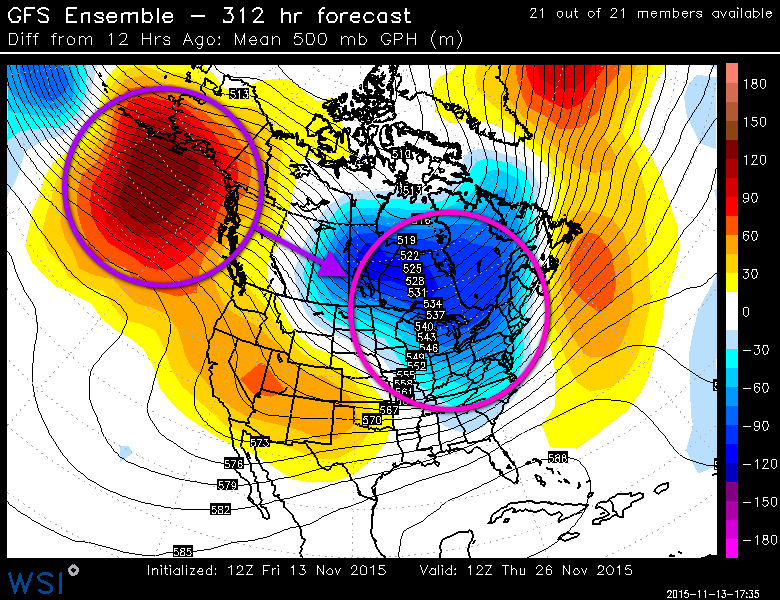 0z GFS shows the colder weather arriving around the 28th when a strong Lakes Cutter changes the pattern for the meantime.

When the latest ENSO report comes out tomorrow, I would not be surprised to see region 3.4 reach 3.0 super status. Region 4 might also bump up too. That being said there are increasing signs that this historic basin wide event has peaked out or at least very close to. I expect slow weakening as we turn the page to December. How fast it weakens will be one of the factors that will determine our winter.

Just a quick update on the evolution of how later this month may be headed.  As the EPO goes negative we will see the first truly cross polar flow beginning around the 19th: 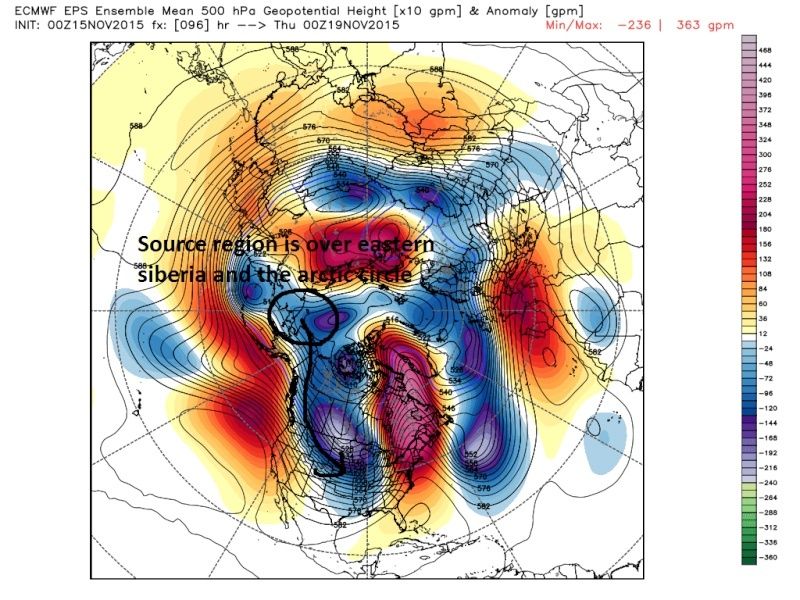 The result of this will be the beating on the SE ridge.  Up until now the SE ridge has flared up with avengence, hence the warmest current Nov relative to avgs on record.  However just look at how the EPS model slowly corrects itslf over time.  The key to this is the strong positive heights up into the GOA.  This will pour arctic air into N America.  Remember climatology will still lead to some moderation as it infiltrates the CONUS and bleeds east.

All images are depicting the 00z Nov 23rd time frame compliments of the Euro ensembles.  Pay particular attention to how over the last two days the negative heights slowly begin to shift east, and the positive heights along the E coast are slowly beaten back. 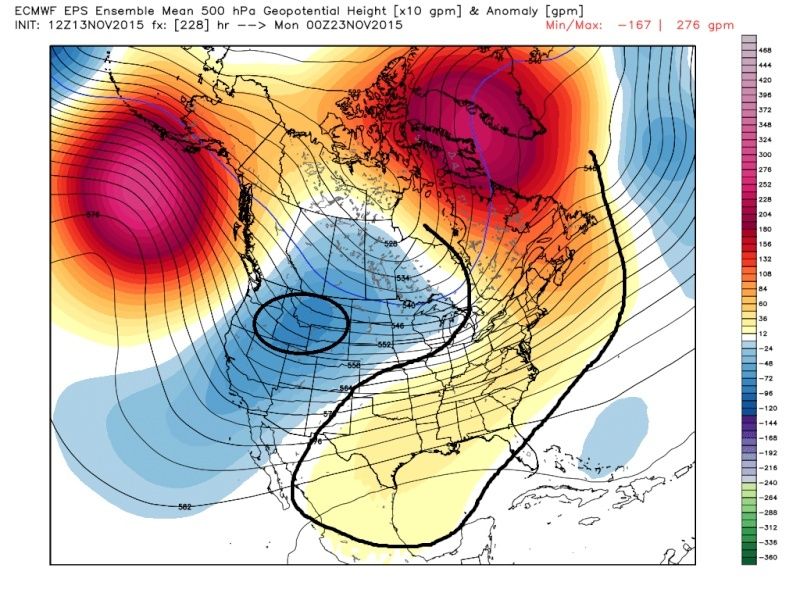 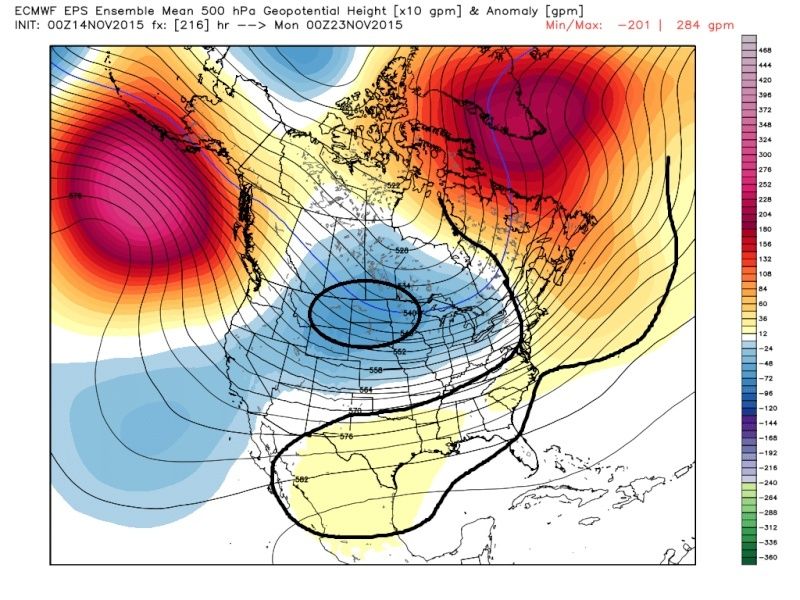 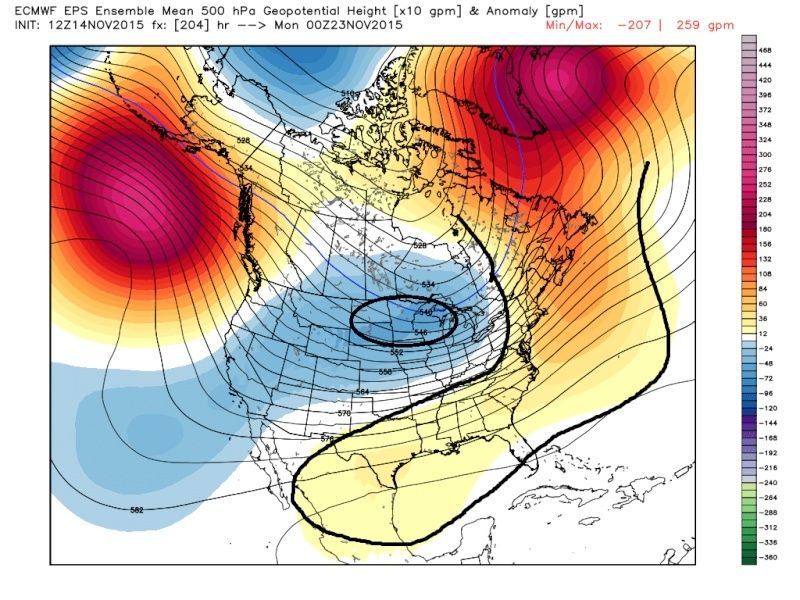 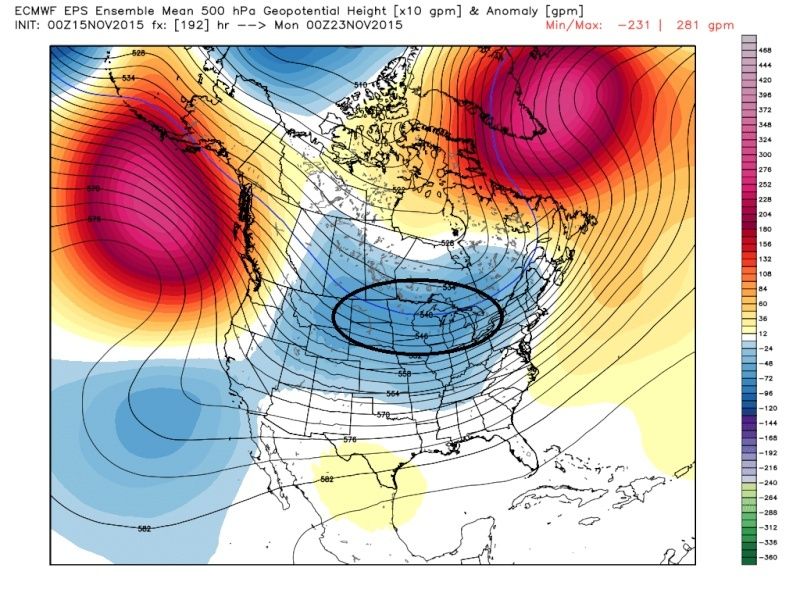 If the -EPO cont to hold strong on modeling I expect the models to cont to correct the center of the trough east, ultimately centering the trough over the GL.  This could lead to the potential for a system to develop off the coast between the 23rd and 28th time frame.

The 12z Nov 25th time frame seems to be evolving the same way. 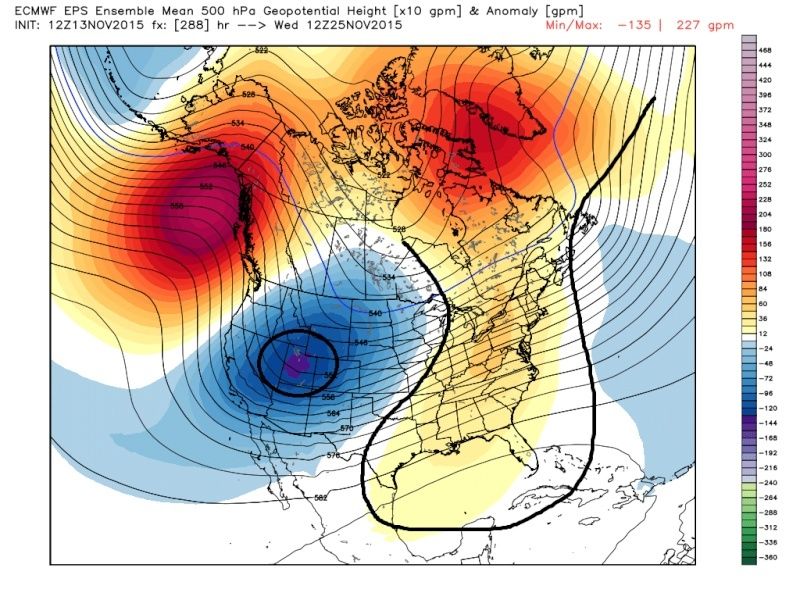 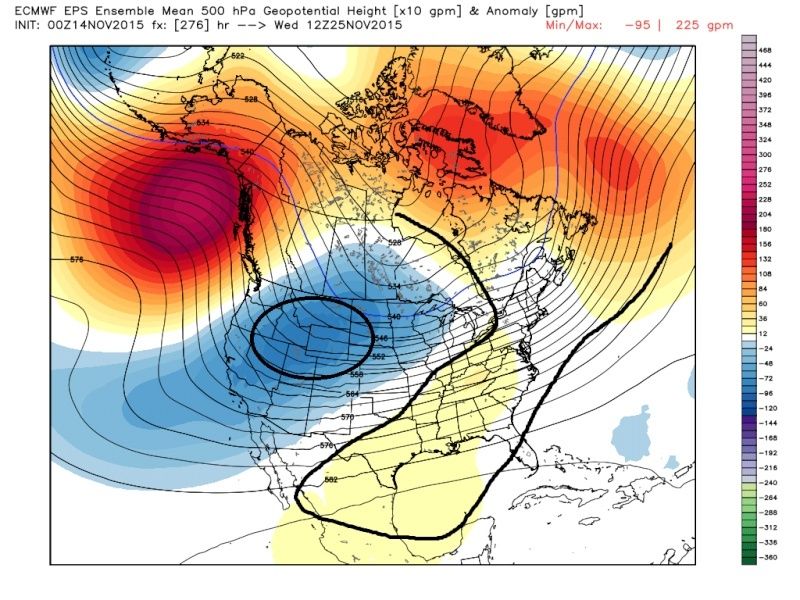 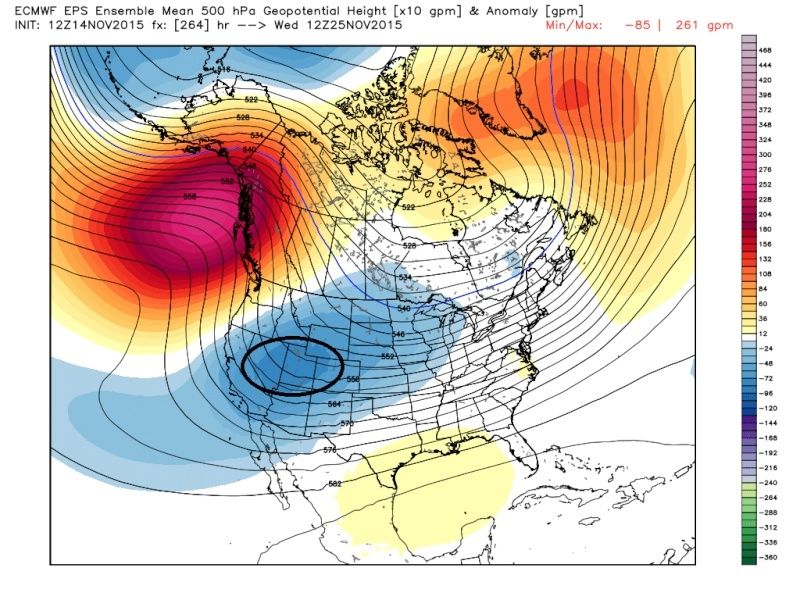 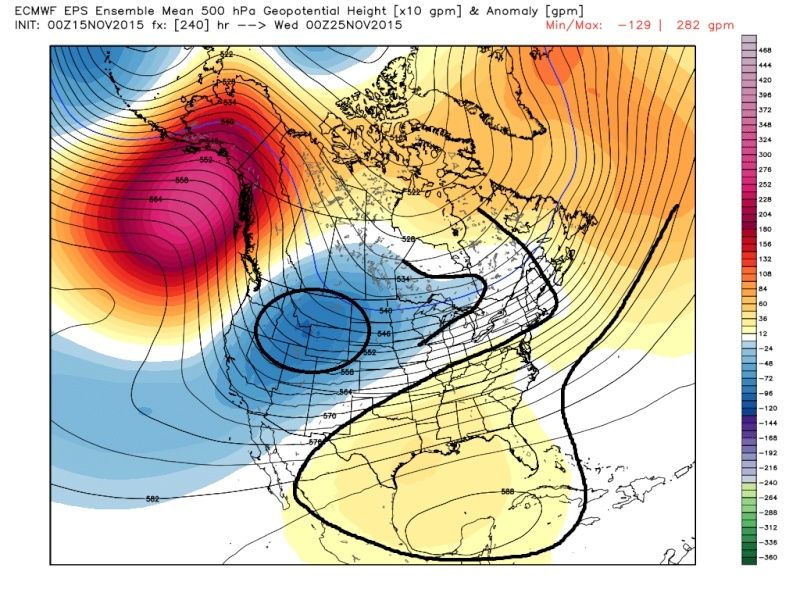 JB just posted. He is loving how regions 1 and 2 are cooling off and 3 and 4 are warming up. He is still saying that his map that he made for the winter still looks great to him with winter weather starting in December.

Joe D'aelo winter forecast, talks about NE but encompasses the Northeast. Wow in his belief of using 2202-03, 1995-96 and 2104-15 as POSSIBLE analogs. Expecting nino the peak in all regions by the end of this month.

From one of our own - Isotherm. Very technical outlook and write up especially on the qbo section, whew my head is spinning but looking good - winter that is !

@amugs wrote:From one of our own - Isotherm. Very technical outlook and write up especially on the qbo section, whew my head is spinning but looking good - winter that is !

@amugs wrote:From one of our own - Isotherm. Very technical outlook and write up especially on the qbo section, whew my head is spinning but looking good - winter that is !

This is probably the best winter outlook Iv'e read this season. He goes into a level of detail not many forecasters dare touch on.