Happy Game Day! I would love to see the Falcons win this one, but Tom Brady is quite the machine so I have a feeling it'll go to the Patriots. Should be a good game, enjoy!

So I had this elaborate write-up outlining Thursday's storm potential, but I accidentally closed my Chrome and lost the content. I'll keep this brief. 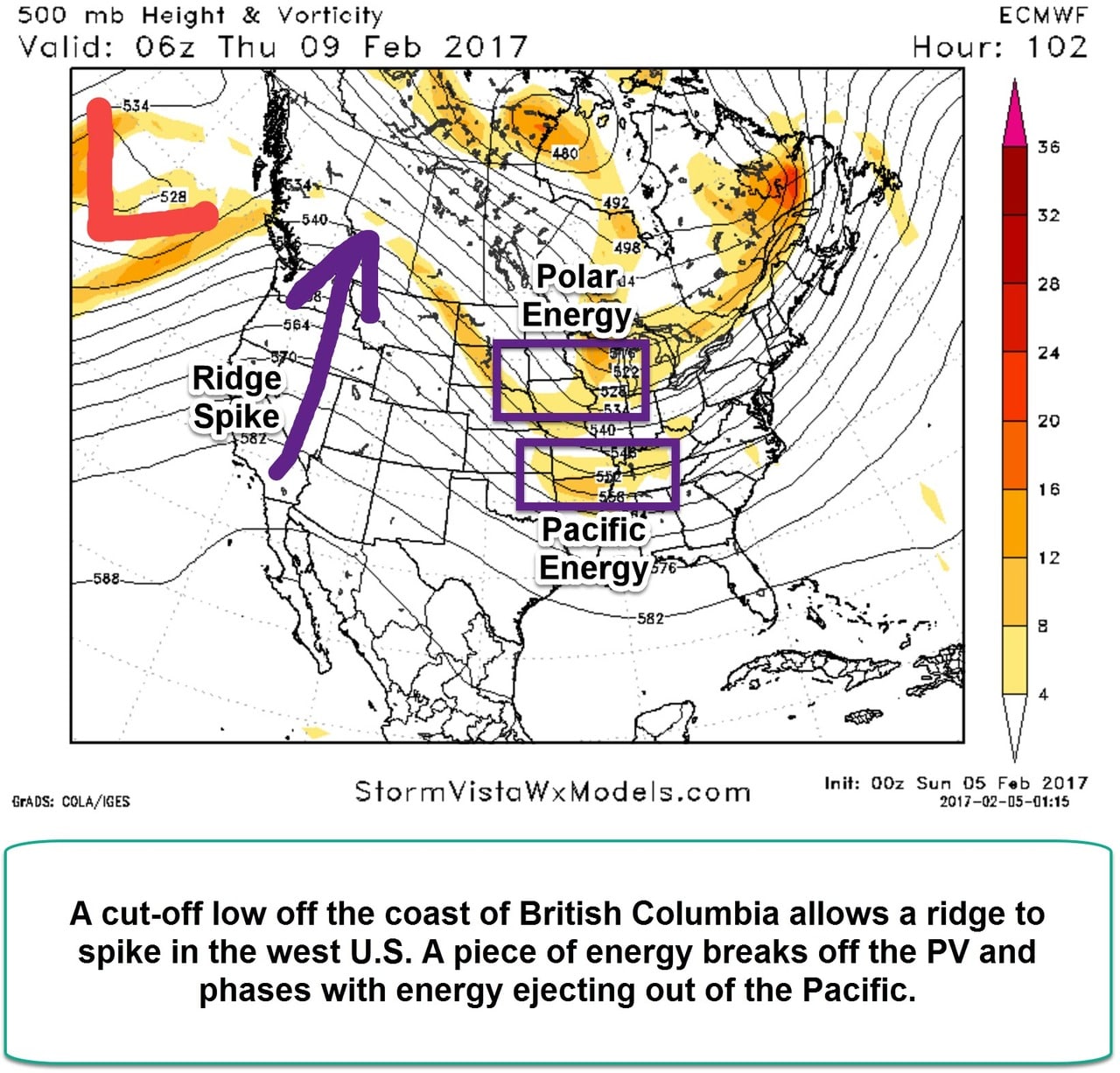 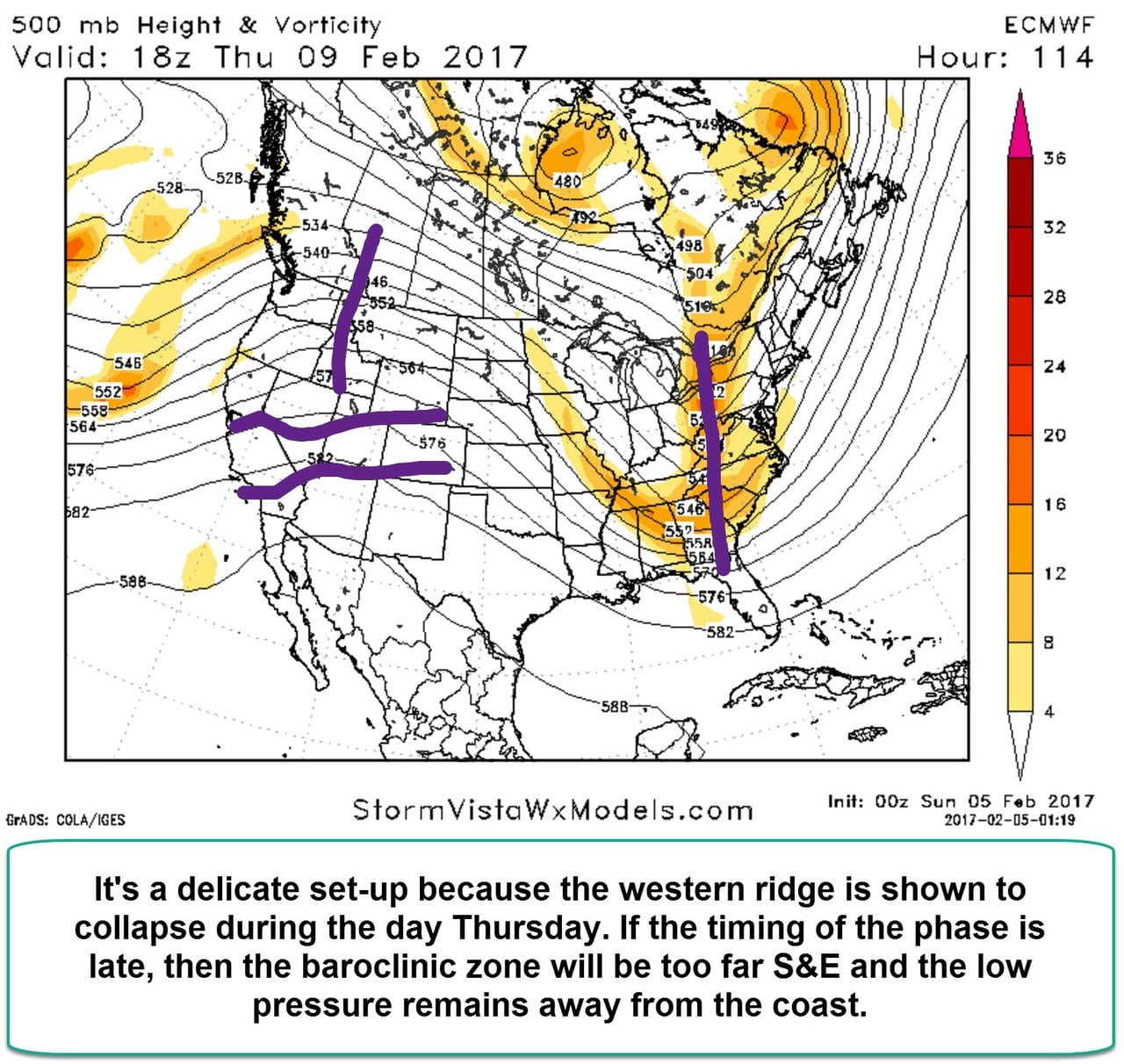 The EURO shows a weak low pressure well south of Long Island on Thursday morning. The differences between the EURO and GFS at the 500mb level is pretty widespread. As you see on these maps, the EURO involves a piece of energy that broke off the Polar Vortex and tries to phase it with the southern energy. However, the western ridge is modeled to collapse so the trough axis gets shunted east and deters amplification.

The GFS on the other hand has an all-out snowstorm. A Mothrazilla. This model has much stronger Pacific energy entering the country which keeps heights along the east coast higher compared to the EURO. The Baroclinic Zone on the GFS is already over our area on Wednesday, while on the EURO it's well south because the Pacific energy is too weak in the center of the country. There is also a front coming through on Wednesday which is bringing us rain. A weaker front would help keep the Baroclinic Zone over our area, as opposed to sending it south and east of us.

Moral of the story is, sampling of this Pacific energy will not be understood on the models until Tuesday. The GFS actually shows 2 separate pieces of Pacific energy which kinda feed off each other in developing a weak low off our area. There's a few combinations we can actually get it to snow pretty significantly here, which is pretty good because normally there is just one scenario. We can either rely on the various vorts coming out of the Pacific, or perhaps involve the Polar energy in some capacity.

Nice writeup but the PNA is rising so there should be a nice ridge in the west.

Thank you Frank for the write up...one can only hope for a bit of good weather news!! I am sorry to hear your first draft was lost

I hope you have a wonderful Sunday and here's to good sampling on Tuesday!!

Awesome post Frank, always right on the money when it comes to these systems. This could work, one major thing that we'll at least have is a fresh injection behind Wednesday's polar s/w event. Also, 50's tuesday and maybe touching 60 wednesday? Well, we'll see! Anyway, we've seen this before with that ridge collapsing, and also, we're going to be coming off a jet extension. So, basically, it comes down to timing as well. Do we get enough of a window to allow heights build so we can get some digging and rounding the bend? I like the chance at least!

Now that is a favorable upper level jet streak! Trended stronger compared to 6z. Now, i know it's still Sunday and early, but this is actually not in a 10 day timeframe. Ridge axis is actually better too. We may just get the perfect timing. 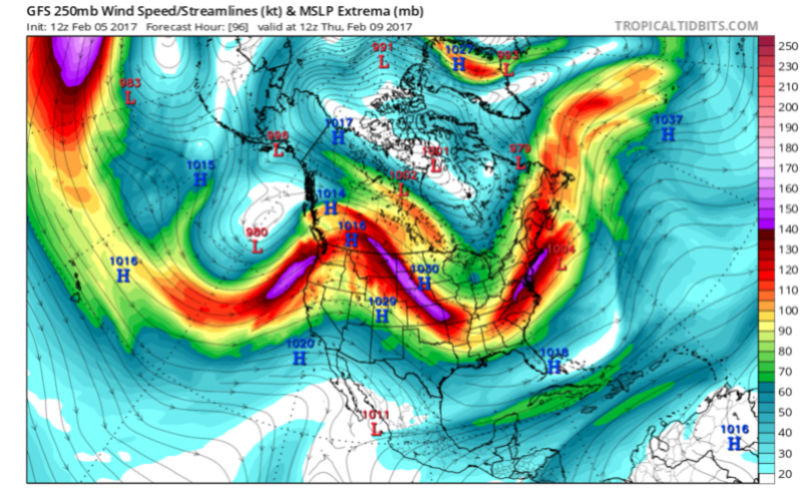 isnt the storm much weaker on the 12z?

been the state of most of this winter i think.

GFS Ensembles look really good. Must be some heavy hitters.

Thank for teh write up Frank and we shall see - wish this was 24hrs out instead of 100 hours.
GEFS are harping on the multiple wave train so we shall see. I will get excited come Tuesday afternoon 12z and then more 0Z night. 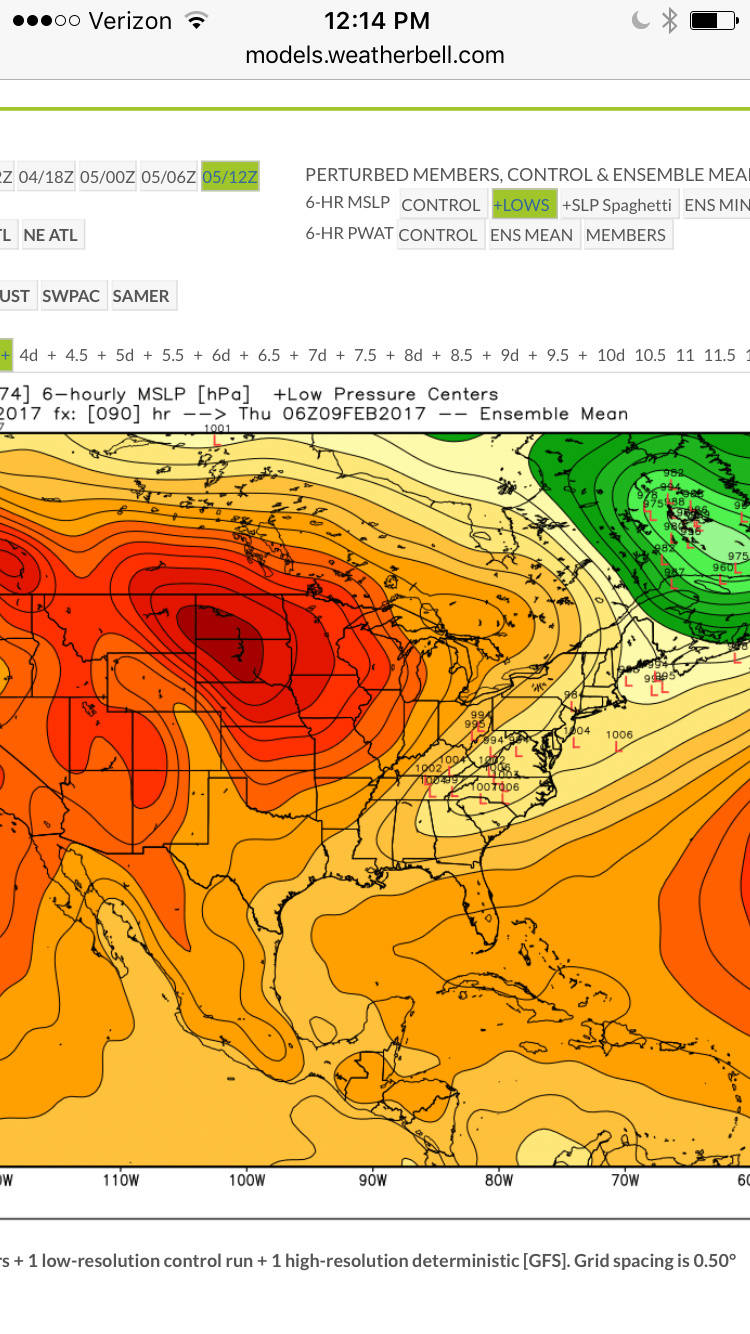 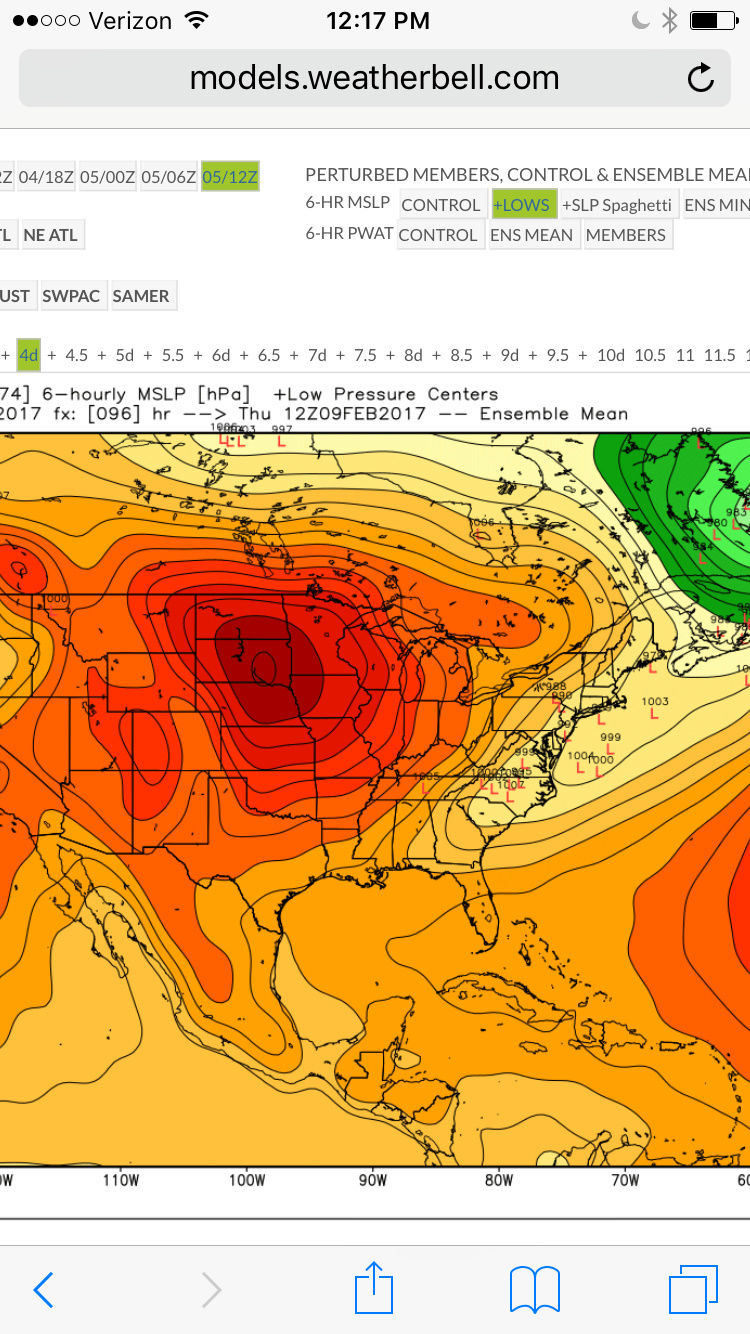 Need that cutter storm to be weaker so we dont push the baroclinic zone to far s & e or else you know the ramifications of this board.

Reminds me of the anafrontal wave last February. It kept on trending stronger as we got closer.

hello.....any update on the euro?? doesnt sound to good from the silence?

It's still there just weeker!!!!

Skins brother I hope you enjoy the Super Bowl. My expectations are if we get 1-3" or 2-4" no thank you. By the way NWS has our area for 45 and rain next weekend

Frank's "Snow Confidence Level" at the moment, does not inspire confidence in this storm. 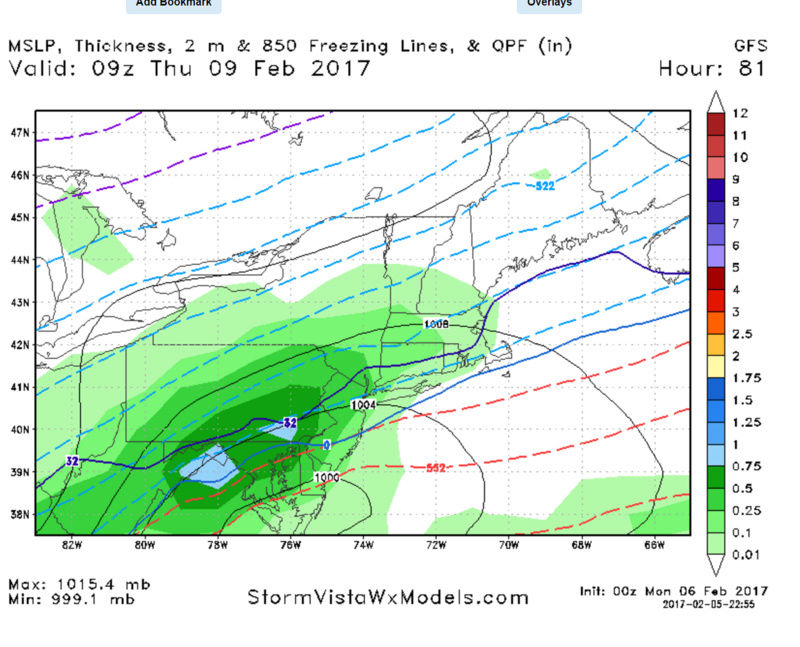 Let us know about the CMC