One of the more interesting set-ups of the season could occur Sunday. A piece of upper energy from the Sub-Tropical Jet Stream is expected to eject out of the SW CONUS and track toward the east coast mid-day Sunday. At the same time, a very potent piece of polar upper energy is expected to dig into the Northeast U.S. as heights rise over western Canada.

The STJ energy will spawn a weak coastal storm, while the 500mb polar energy (northern energy) is expected to close off north of our area. So we'll have 2 low pressure centers to monitor. One around Upstate NY, which will act as the "primary" since it's the strongest of the two upper energies, and another off our coast. Currently, models are transferring energy from the primary in Upstate NY to the secondary off the east coast. Since the transfer occurs late, New England gets slammed with another snowstorm while our area sees a mix bag, or snow to rain type event. But the details are not set in stone and this system has been trending colder over the last few runs.

My main issue with this set-up is the lack of High Pressure to our north. Actually, the weak wave that could bring us light snow on Saturday boots the HP east. So it acts as a negative for our storm system on Sunday. With no HP to our North, it will be very difficult to keep cold air in place as the surface low associated with the STJ energy tracks toward the coast. Heights will naturally rise and warm boundary layer temperatures.

As the primary begins transferring energy to the secondary off the coast, cold air will get pulled S&E toward the coast. On the NAM, enough cold air is still in place (NYC and N&W) that they actually start as snow, go to rain/ice, then back to snow in some places. On the GFS, everyone starts as rain then areas well N&W of NYC change to snow as the secondary intensifies off the coast.

In my mind there are 2 scenarios:

#1 - Mostly everyone starts as rain then those N&W of NYC, possibly including NYC, transition to sleet then snow. This scenario would have minimal impacts as it will likely not amount to much in the way of snow accumulations. No snow accumulations to perhaps 4" of snow is possible in this scenario. Especially N&W.

#2 - N&W of NYC, possibly including NYC, start as snow/ice with a delay in changing to rain. This is an interesting scenario because it could very well be a case where some people (mainly N&W of NYC) remain all snow IF the primary low stays weak enough and the secondary low transfers at the right time / fast enough. A scenario in which you remain all snow could bring 4-8" of snow, possible even more. A scenario where it's just a front-end thump of snow is probably in the 2-4/3-5" range.

All we can do at this point is monitor where guidance trends. Global models seem to be warmer than short range. RGEM/NAM, 2 of the best short range models, have significant snow falling for those N&W of NYC. If I had to choose, I would lean on the warmer solutions for now but we'll see how this goes. 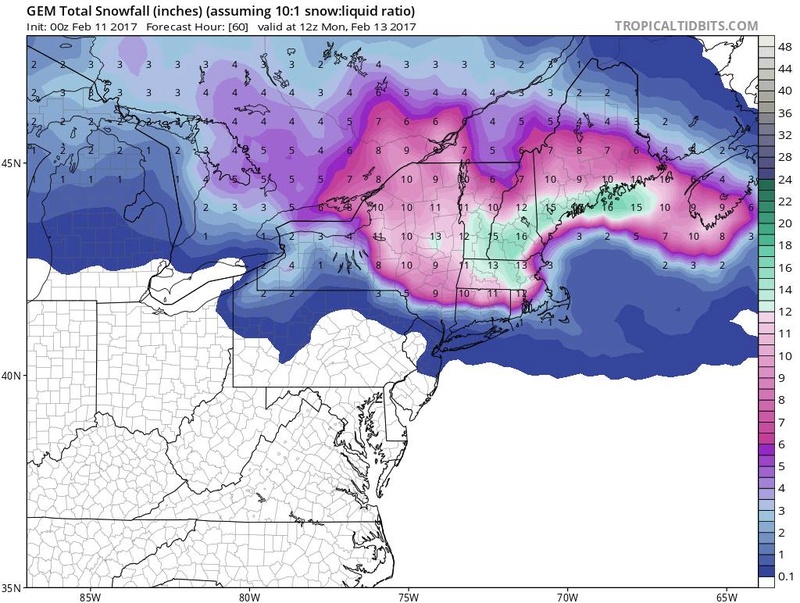 Hyde that map cmc got you in the white gold I am close this is going to be a close call for i84 north and hope it goes more south to. 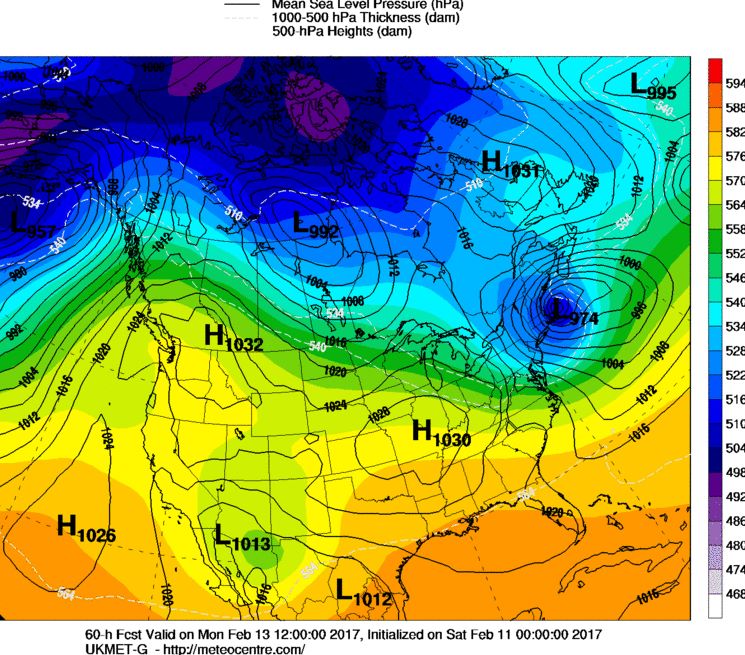 jimv45 wrote:
Hyde that map cmc got you in the white gold I am close this is going to be a close call for i84 north and hope it goes more south to.

I would sign up for that in a heartbeat. Lets hope it continues to trend colder.

Here is my first call for the potential impacts of the Sunday-Monday storm:

A storm will be moving into our region Sunday morning from the west. This setup is tricky because thermal profiles are highly dependent upon the evolution of this system, which in itself is very complicated. There will be a primary low, actually a clipper, diving southeastward through Canada and the Great Lakes as a weaker wave rides along the cold front left behind by tonight's clipper that is draped across the Ohio Valley. Modeling is suggesting that there will be a transfer of energy from the Canadian clipper diving southeastward to the weaker wave riding along the frontal boundary once it emerges off the Mid-Atlantic and/or southern New England coastline. Historically, these types of events are very hard to predict, even at this range, because of how complex the situation is. Also historically, with systems that ride along frontal boundaries stalled across the Ohio Valley, warm air aloft usually makes it about as far north as the northern tier of Pennsylvania and east as the Delaware River, turning any snow to sleet and freezing rain. All other areas, including northern New Jersey and points east tend to stay mostly snow (except for the coast) as cold air is driven southward from New England ahead of the coastal development. Given the historical tendencies and the recent snowpack helping to lock in the low-level cold air, and current large-scale pattern, my first call follows the general climatological outline of these types of events in this region, although snowfall totals are a bit higher because of increased moisture fluxes, and is largely different from guidance at this point in time. Guidance is noticeably warmer across Pennsylvania, New Jersey, southern New York, Connecticut and Rhode Island, with significantly lower frozen precipitation totals, but I am expecting colder trends over the next 24 hours based on what I see and what I have seen before. I probably will not have time for a final call tomorrow, but just know that the POTENTIAL for what you see here is certainly there in my opinion. I will update if I can!! 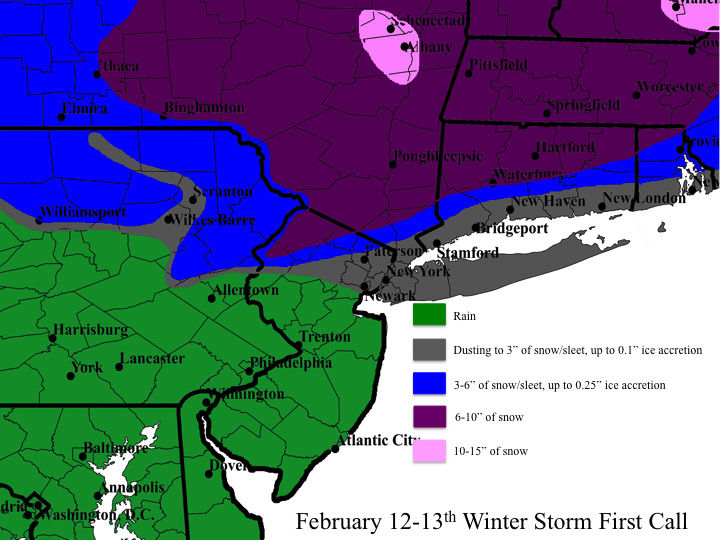 Anyone looking at the Euro running right now? 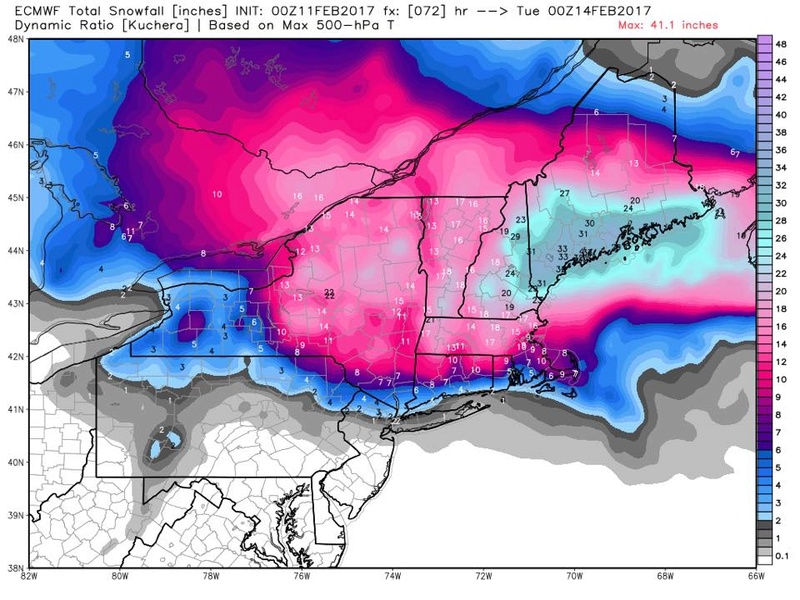 OMG. My parents are under the 29 INCHES in Strafford County, New Hampshire!

GFS beginning to cave to EURO And RGEM Type solution for Sunday. WSW already down to Dutchess county. Most of HV and and NNJ WWA for tomorrow.

If this can trend 50 miles further south NYC and LI may join the party. Most short term guidance trending to RB's map now with 6-10 inches in much of HV. 3-5 on some creeping into NNYC. THINK the WSW may continue south into Orange and Putnam maybe Rockland and N westcher. Interesting day coming.

IF the trend continues south and colder things will get very interesting for even more.

CPcantmeasuresnow wrote:GFS beginning to cave to EURO And RGEM Type solution for Sunday. WSW already down to Dutchess county. Most of HV and and NNJ WWA for tomorrow.

If this can trend 50 miles further south NYC and LI may join the party. Most short term guidance trending to RB's map now with 6-10 inches in much of HV. 3-5 on some creeping into NNYC. THINK the WSW may continue south into Orange and Putnam maybe Rockland and N westcher. Interesting day coming.

IF the trend continues south and colder things will get very interesting for even more.

Well, my,my,my lookie here.From nothing to a Winter Weather Advisory for 2 to 4.Love rb's map for here, 6 to 10.Your're right CP, interesting weather day ahead.

Winter Weather Advisory up here as well. The temperature profile is tantalizingly close to being an all snow event with everything hovering right around the 32 degree mark.

Got a winter weather advisor for freezing rain tomorrow

One thing that has me very concerned is the icing threat combined with a strong wind threat. It looks like ice amounts might have to be bumped up to potentially .35" ice accretion possible for my areas in blue, and up to 0.2" in the grey. Wind is also very concerning, especially given the icing potential, as sustained speeds will generally reach 15-30 mph with gusts possibly up to 55 mph Sunday evening through Monday morning, before they start to slowly calm down during the late morning and afternoon. BAD BAD BAD BAD BAD.

Snow when I said 3-5 I also included Essex county where I reside. Sorry I should of specified.

Snow when I said 3-5 I also included Essex county where I reside. Sorry I should of specified.

Hope we all cash in

Nam Para is coming in colder than the regular Nam. Icy mess just north I mean just north of NYC.

looks like I'm in for a real icy treat tomorrow lol

I don't see any winners with this system.