Yes, I decided to pull the trigger and officially label this event a Roidzilla. I'll say this now: I am not expecting Roidzilla snowfall amounts (24"+) for NYC Metro yet. (you'll see my snow map at the bottom of this write-up). I do expect widespread 24"+ snow amounts N&W of NYC with the possibility remaining open areas further S&E, including NYC, get into these higher amounts too. Heck, there are models (EURO, RPM, Hi-RES NAM) that do show about 24" for NYC, however I do not feel ready yet to pull the trigger of calling for that much yet. I have my reasons.

Even though majority of guidance disagrees with the GFS, I felt it was important to highlight the differences between it and the EURO. The GFS has the storm system moving faster and taking a track further east, while the EURO is slower and tucks the coastal low inside the 40/70 BM. Valid 1pm Monday, we see the GFS compared to the EURO having a weaker ridge-bridge out west and a piece of "lead" energy over Ohio. The ridge on the EURO is stronger and it does not show a 'phantom' energy over Ohio. As the run progresses, it's evident to me heights along the east coast are flatter on the GFS because the lead energy dampens them. Also, the trough is not as sharp due to the weaker ridging out west. These are key reasons why the GFS is a little faster with the storm.

Valid 4pm Tuesday, the GFS shows an open 500mb vorticity over New England while the EURO closes off. The distinction is critical because the EURO shows a slower moving system and a stronger CCB over the area lasting well into the early evening hours. The precip shield overall on the EURO is expansive and potent. The open wave keeps the surface low moving at a quicker speed and the precip shield is not as impressive.

Another key difference between the GFS and other models, such as the UKMET in this case, is where it places the upper level jet streak. The GFS is rounder with the trough and shows the strongest winds east, while the UKMET is sharper and has the strongest winds getting into the Mid-Atlantic. A sharper trough results in a system tracking closer to the coast. To be honest, the 250mb depiction of the GFS is not so bad. The fact it does not look better at the surface kinda confuses me. Since foreign models are very strong and bullish with this system, and the GFS is nonchalant, I tend to lean toward the foreign models especially when looking at the mid and upper level dynamics. 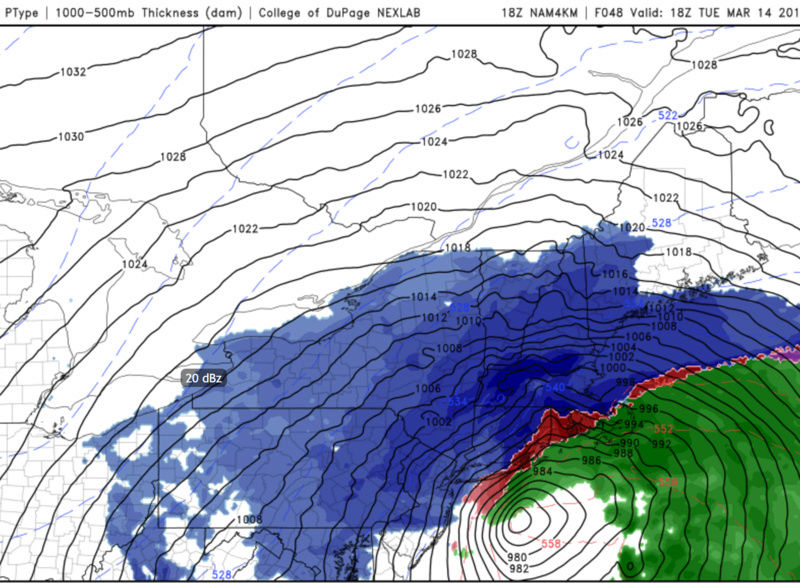 I like where the hi-res NAM puts the deform band as the low level center passes to our N&E. Other guidance such as the SREF and RGEM show something similar. The 850mb vort looks like it wants to track JUST off the coast of NJ. So a deform band N&W of there makes sense. 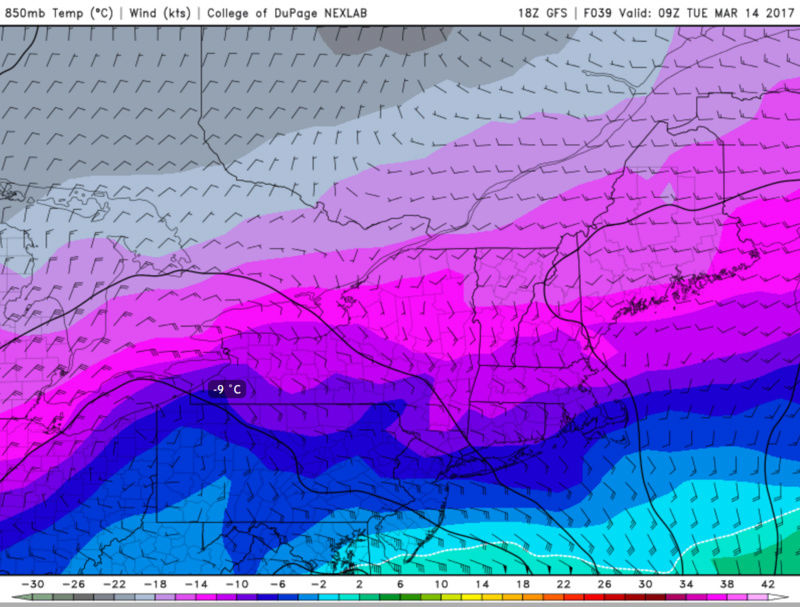 And because 850mb temperatures are expected to be colder than -6*C; and winds will be on the ligher side away from the coast, ratios will be 15:1 from eastern PA, NW NJ, SNY. 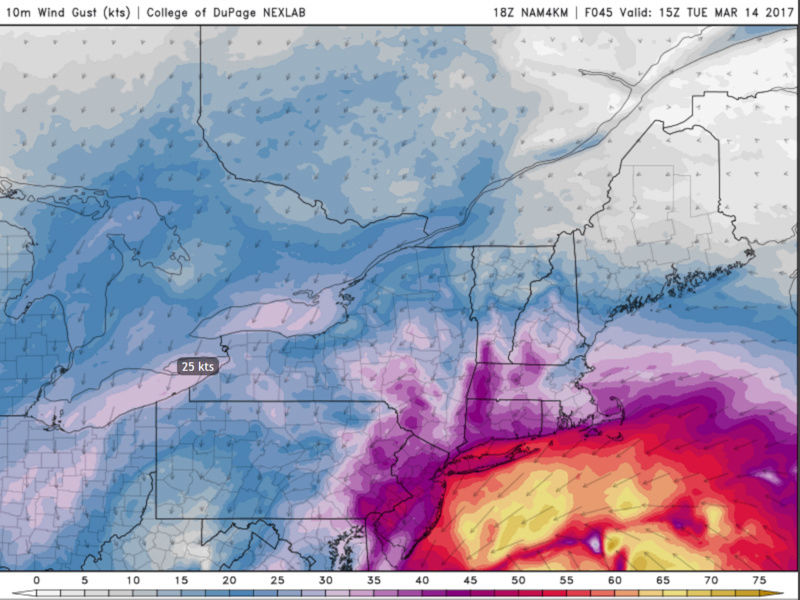 The closer to the coast you are, the higher wind gusts will be. The surface low pressure off the coast may deepen sub 980mb. This is where blizzard conditions are most likely expected. Drifts could approach 3 feet in some spots in NJ. 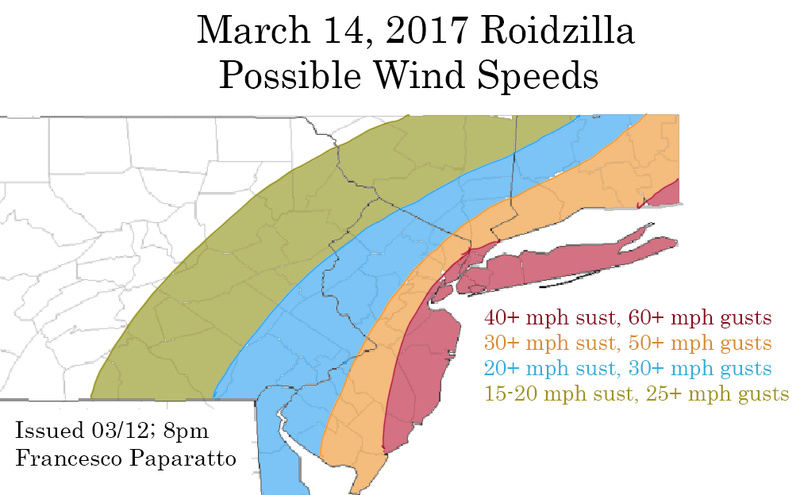 Here is a look of my wind forecast. I may be a little conservative in some areas, but I think the immediate coast is at risk of seeing power outages with the high winds and possibly heavy snow that will be falling at times. 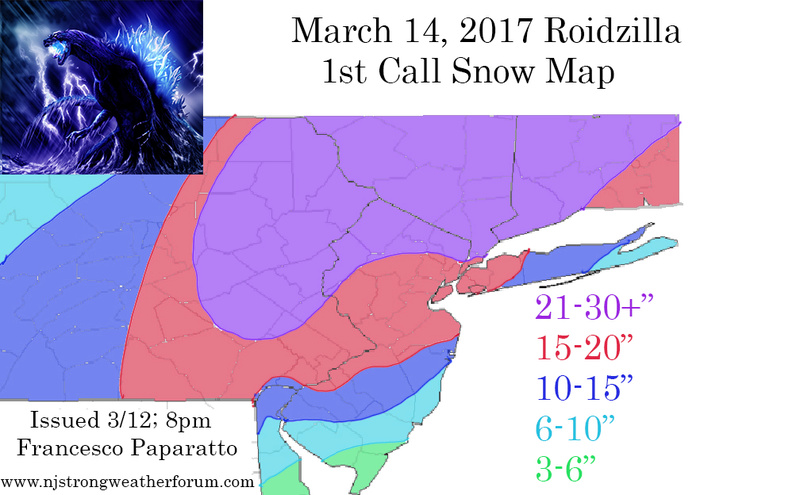 As briefly mentioned, I am not ready to put NYC and surrounding areas in the heaviest snowfall amounts. I am watching for an area of subsidence that may develop around this region. Also, I am not sure models are done trending west with this system. Areas from central NJ on east run into a risk of being dry-slotted at some point in the storm. Those N&W of NYC, especially NEPA, I feel are the bullseye at this time and where the Roidzilla snow amounts will be seen. THAT SAID, I do feel Godzilla snow amounts (12"+) will be fairly common region-wide.

As for coastal NJ and Long Island, you are an area I am watching closely. There is great uncertainty with the exact track of the surface low still and your area is most affected by this disagreement. The SREFS/EURO/RGEM, for example, have you warm for a period of time so you're seeing sleet/rain instead of snow. But with a deepening low off the coast, one may think it can pull the cold air inward and keep precip in the form of snow. We have to watch the trends very closely and see what happens.

This is a 1st call snow map for a reason. I have a feeling there will be changes to my final call, possibly drastic one's, since we're dealing with a monster of a storm. We should honestly sit back and appreciate what we're about to witness. A region-wide Godzilla in March is rare. And with the way this winter has gone I think we can appreciate anything we get.

And for the first time ever, I will be holding a live chat during lunch hours of 12pm-1pm tomorrow so we can get an idea of how afternoon model runs are trending with the storm. Please be sure to join, it should be fun!!

Have a great night!

Well done Frank..hope you enjoyed some vino and sauce at Nonna's while drafting this up.

Wow 10-15 for northern toms river I mail be crying tears of joy. Thanks for the hard work

Maddone! Thank you Frank for making my night!

Thanks Frank. I know the time and energy you put into all of this and it is very much appreciated.

Thank you Frank for a FANTASTIC write-up!! Talk to you all tom..going to sleep with sugar plums dancing in my head!!

Thank you. Great write up. You make it very easy for everyone to understand.

Great work, as usual, buddy!!! Terrific discussion! The only thing I personally disagree with, is your upper limit on totals, but that is forecaster preference hahaha otherwise, your gradients and what I had roughed out in my head are identical haha great job!!

Frank. Thanks for taking time and energy to write this up and explain it to us. Returning from FL tomorrow to make sure I am home for this one. Looking forward to continued updates.

Great job as always Frank, plan on enjoying the ride!

Does the sun angle this time of year have any influence on accumulating snowfalls? Or will it be falling so fast and furious it could be July and the sun wouldn't matter with the projected snow rates.

Great write up Frank. Thank you for your time and effort.

Great job Frank. Thanks for all of your hard work.

Paisan As always Great Thank You

I'm so excited! Great write up Frank! Thank you for all the time you put in! Everyone enjoy your snow!

Frank I could not b happier the wind map is insane and u have me in worst along with 21 to 30 inches I know it could change but awesome job and I can't wait.

Great Writeup! I am new here so this has been quite the experience with this storm. I joined today but have been following this storm since the start. I can't believe I am in the 21-30+! Hope this turns out to be a HECS/BECS!!!

@Frank_Wx wrote:I honestly need a drink. So mad...I got a new computer and lost my Roidzilla banner. Need to make a new one.

If you want me to make you one, I'm a graphic design major and would be happy to do so haha

@Frank_Wx wrote:I honestly need a drink. So mad...I got a new computer and lost my Roidzilla banner. Need to make a new one.

If you want me to make you one, I'm a graphic design major and would be happy to do so haha

I hope you can make it in time, we may not see another Roid in awhile.

frank thank you for all ur hardwork you do . i am very happy with the snow map and u have me not far from 21 to 30 inches of snow