I need medication. Hands down worst winter ever for me mentally with the expectations. Not even close. Help me CP.

The pattern is starting to get better

Snow88, I heard that all year, sorry but until I see it on radar? Nope

I’ve been trying to hang tough with this system but I think I’m close to throwing in the towel for anything more than a coating to an inch - if that. Haven’t seen anything positive from this in almost 36 hours now. I guess I’ll wait to see what tomorrow’s model runs show with better sampling but not looking great.

Moved to the banter thread. 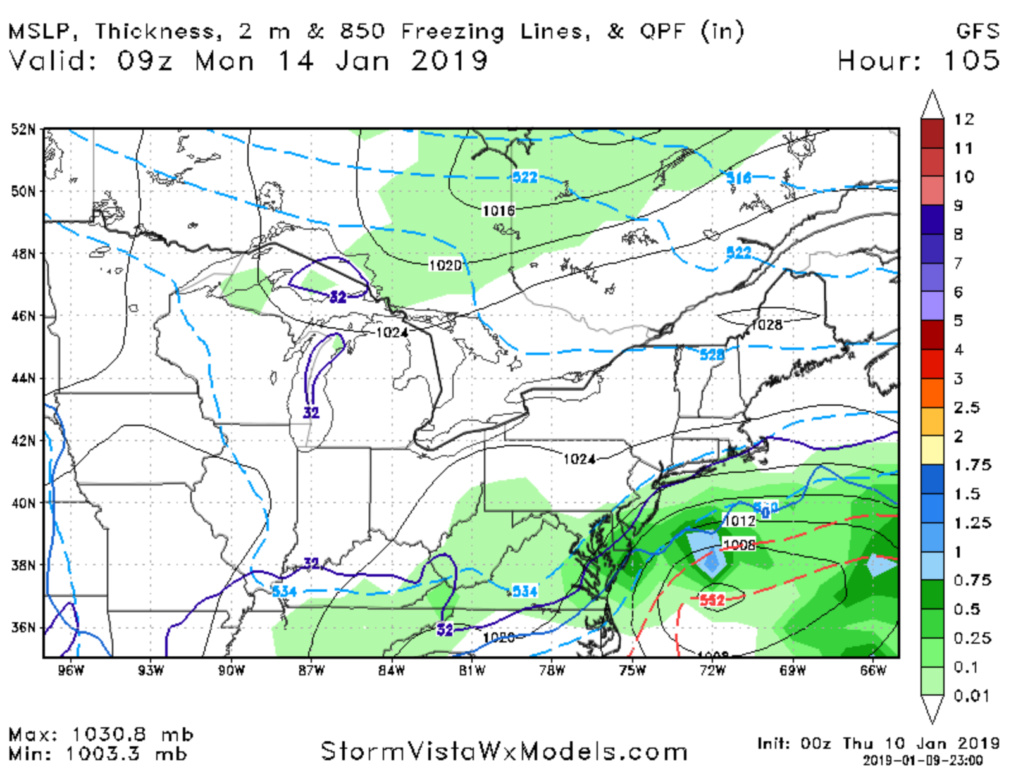 So, for those in Ocean County and southern Monmouth County:


And the new 00z valid for the same time:

If DC gets 6”+ after what happened in early December in NC and southern Virginia while we miss out on. Out again then ............I fear for my safety

'These are the winters that try a snow lovers soul"!
Just a 40% chance of light snow,maybe a "coating"( I HATE that word, coatings are for your tongue not your lawn) followed by a moderation for next week according to Lee Goldberg.WHOOOPEEE!

Normally my line of thinking is to just let the winter play out before you grade it. It takes one KU event to change everything in this forum, but lately I have to admit I've been on edge too. With the flip flopping between soaking cutters to suppression depression this season thus far, you can't but help to think it just might not be our year.

OMG when you wake up to Doc ..and snide weather remarks....we know we are in trouble!!!!! This sucks and I know it's banter

Don't succumb Doc!!!  Nutley and Mom, you too! Its what the warmacists want!!! We can get this done, but we have to BELIEVE!

Still, as the warmacist-rebellion is gaining considerable momentum not only here on the mainland, but aloft as well, we need to listen to our Yoda...who says 'Trust the Process'!

Help us RB, you're our only hope!

weatherwatchermom wrote:OMG when you wake up to Doc ..and snide weather remarks....we know we are in trouble!!!!! This sucks and I know it's banter

LOL, Mom, not to fear! Plenty of time left to turn this winter around.I was just laughing at rb's comment to Jimmy.It's like poking a hornet's nest with a stick!

SENJsnowman wrote:Don't succumb Doc!!!  Nutley and Mom, you too! Its what the warmacists want!!! We can get this done, but we have to BELIEVE!

Still, as the warmacist-rebellion is gaining considerable momentum not only here on the mainland, but aloft as well, we need to listen to our Yoda...who says 'Trust the Process'!

Help us RB, you're our only hope!

Actually SENJ, Yoda would say "The Process Trust we should",LOL. Don't worry my good man, I never give up until March 15 with no snow in sight for 2 weeks.Just being an instigator here, in Italian the word is SCOOCH,LOL.

Update:  I have to quote myself from the Tuesday morning write up because it summarized fairly well what we had to have happen for things to work out.  I have highlighted the key points.  Once again the Euro is King and had the right idea overall well before the GFS.  This; however, should come as no surprise.  For the images in the quote below regarding the GFS we really needed to have the S energy out ahead of the N energy to get a true storm to track far enough N to affect the area in a significant way.

Two main features to watch if you going to look at models.  Surface is useless.  500 tells the story.

The Euro has been more consistent showing the N energy out ahead of the S energy AND has been more consistently showing the S energy more strung out vs consolidated when compared to the GFS. In Ray's write up he mentioned this as well.  The strung out nature of the energy, if this is being modeled correctly by the euro, will make it very diff for the heights to raise out ahead of the system because it generates a weaker system overall.  This combined with the N energy ahead of the S energy does not lend me to believe that we end up with a true snow storm...this time because the 500mb flow along the coast remains too progressive to bring the storm track N enough.  While I certainly have not written anything off, esp some light snow possibly making it into parts of the area, a suppressed soln is def where I am leaning until I see the euro shift towards a more consolidated S energy and/or a slower N energy. 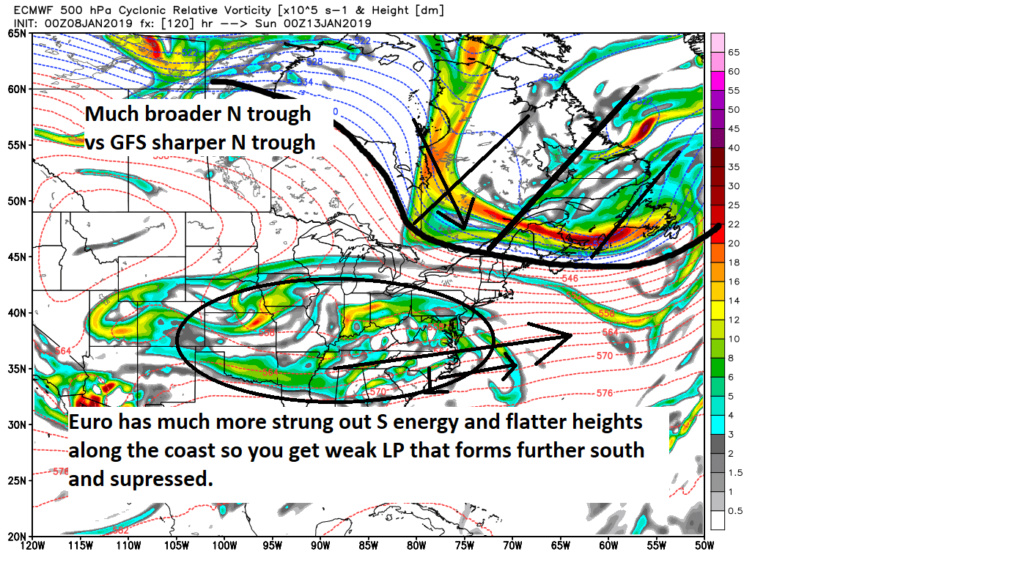 Once it became clear that the N energy would remain ahead of the S energy the focus for me shifted to over running high ratio snow event that would preceded the main LP as has been high lighted over the past few days.  With the GFS still jumping around quite a bit with some of he key features at 500mb I used the much more consistent Euro and focused on the more specific location and timing of the N trough, the strength of the S energy( how consolidated or strung out it is), and to a lesser extent the Energy on the N fringe of the PNA ridge(which plays a role in the result of the N trough).  Below where the last several runs of the euro high lighting the 3 key components to watch.  Up until     last nights 00z the euro had slowly been trending slightly slower, and further N&W with the placement of the N trough and the S energy had trended a tad stronger and more consolidated.  Remember the changes were subtle but the diff between 0-1" vs 3-5" of a light high ratio snow was apparent.  Unfort as you can see by he last image below(00z Jan 10th) we are back to what looks more like 00z Jan 8th(first image) where the N Trough is back S into central VT/NH and no longer back west into the E GL and along the US/Ca border like 12z yesterday.  The result is the boundary layer is draped over the LI sound/CT shore rather than up into central Mass area highlighted by the black line, and arrow pointing N just off our coast line. 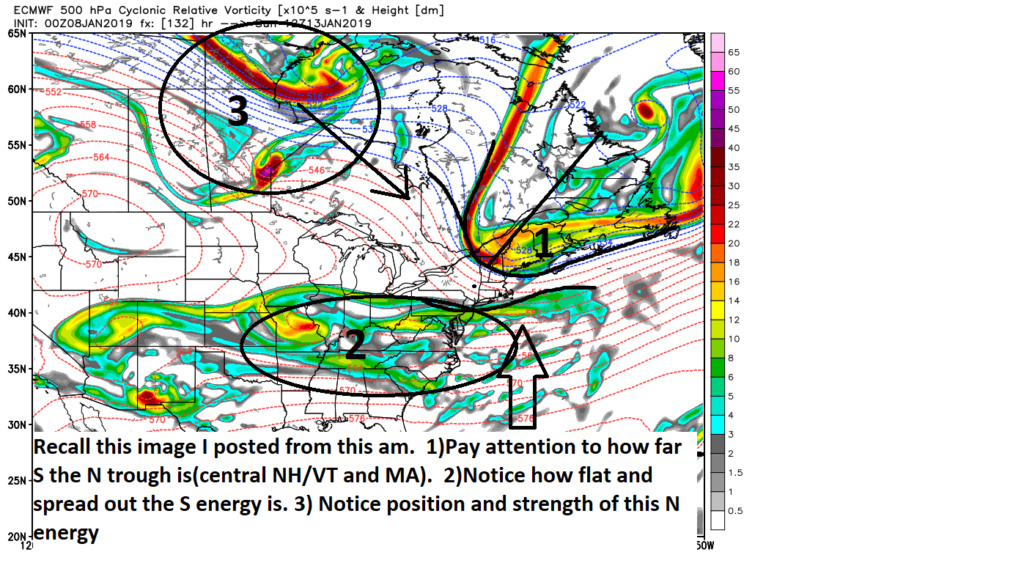 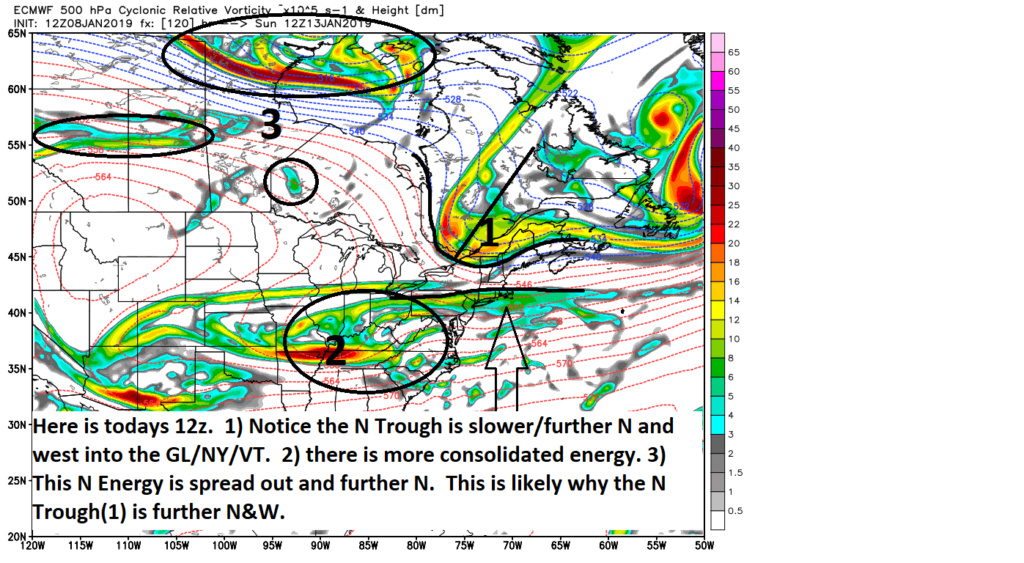 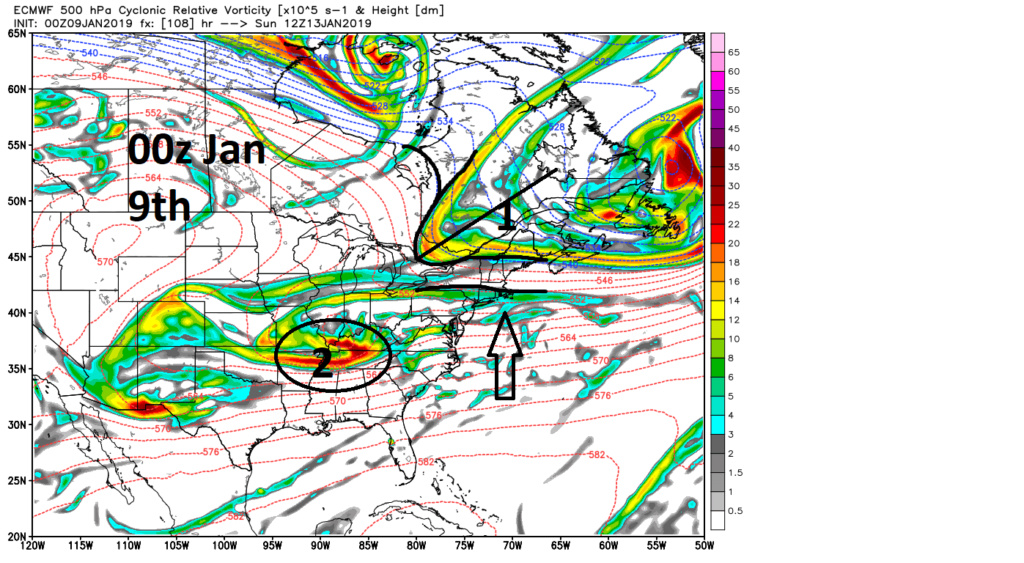 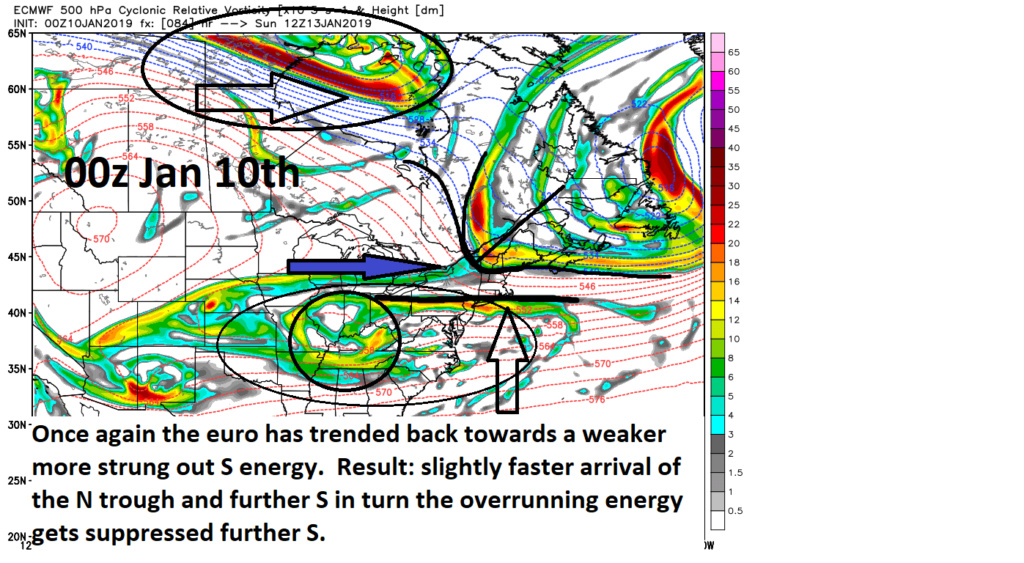 The euro has trended further N with the over running event for several runs in a row while last night it went back in the other direction.  We still have 2 days to go so we will see if this is a blip and we tick back to the slightly further N&W with the N trough or if in the final hours we cont even more suppressed, which is possible. The result of this likely dicates how strung out or consolidated the S energy is.  Low expectations leads to smaller disappointments.

A few more clicks in a similar fashion 1) even more consolidation of S energy 2) even slower and further N&W the N Trough and additional large positive changes at the surface are in order.  HOWEVER, the same amount of tiny changes back in the other direction at 500mb and you get what the 00z Euro showed.

sroc4 wrote:Do not get discouraged by the 13th system being suppressed.  While it’s not entirely dead yet, IMHO it almost always looked to be a suppressed system so for me there wasn’t anything to get too worked up over nor disappointed over. While this set up and likely ultimate soln has very similar tendencies to the suppressed Dec 9th/10th storm, unlike that system behind it the pattern becomes ripe for the picking rather than headed to the above normal temp/cutter pattern that followed the Dec system.

I still firmly believe that when this winter is said and done many will grade it around a B. That means a big time come back given the last month. If you don’t want to buy it fine but keep it in the playpen thread. Any garbage in here will be deleted.

This storm is shaping up just as I started to suspect yesterday morning: A DC to AC Special. I still think we see some snow here but very light with SNJ getting accumulations. I remember as a kid walking to school one day in flurries with light snow coating the ground while the news reported on the 12-18” of snow falling heavily in Atlantic City. Not sure the South Jersey coast will do THAT well but it is the best place to be Sunday night to see something significant from this. I’ll keep hoping for that last minute shift north in the next 24-48 hours but for now looks like there will be shoveling at my shorehouse and sweeping at mine.