The pattern should remain active.  These negative SOI values are indicative of an active subtropical jet.  Hopefully we get lucky on something. 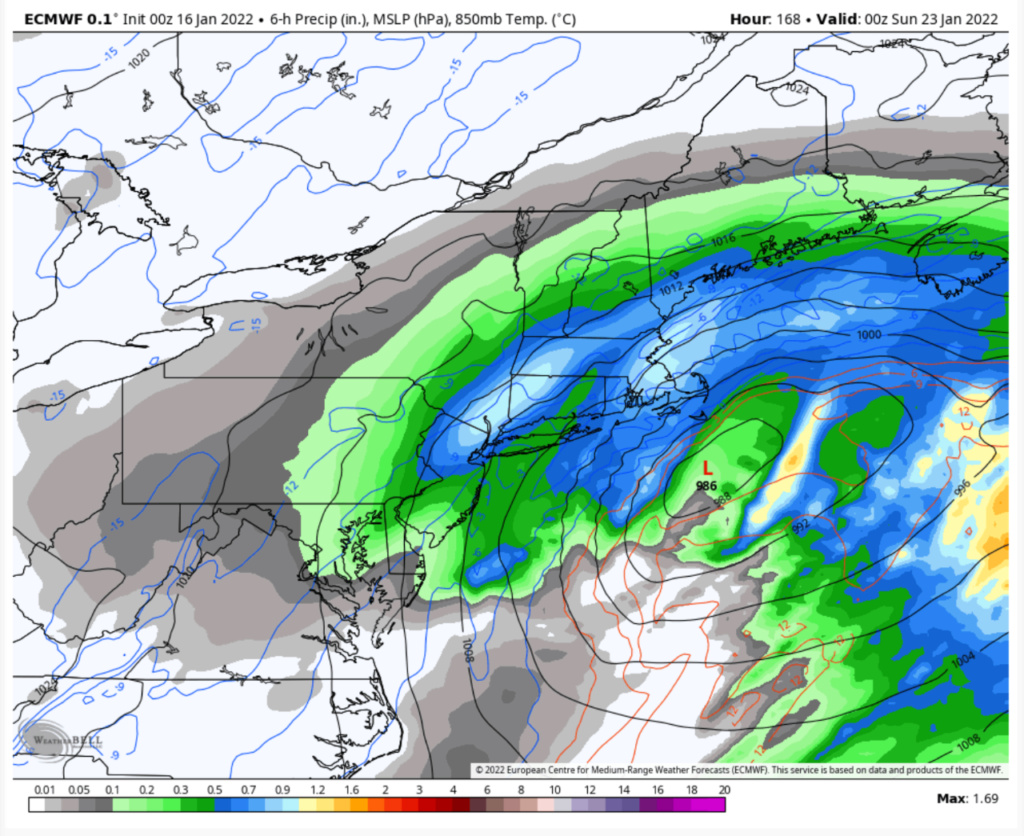 Aha there it is. Taken verbatim with 1.5 QPF with temps in the teens during the event it’s a 2 footer. CMC shows a huge hit as well. GFS shows a very strong storm although OTS. The difference with next weekends potential compared to tomorrows rainstorm is that we have a high in the right spot this time. Currently the models see the Day 6 potential then lose it only to bring it back again. Plenty of time to track, but after last nights Euro and CMC runs I’m sure Frank will have a more detailed discussion on it.

wow that deayh band right over my house, ill take 1 for me plz. Not getting sucking in though, thursday.

Good call Jon! As for myself, I’ll be getting sucked in. Probably in the next 24 hours, if the signal persists…

Who am I kidding, I will probably get sucked in if theres ALL good signs, if I hear this is a thread the needle not getting my hopes up. Plus got a very busy week, won't be staying up for late night model runs and very little time during day that I can look at models or forum but ill def try.

Can we hold the banana or will it go....banana's!!

Yup do not know why people even waste their time looking. All they do is fake sensationalization stuff, i liked it back when there was john hope and Cantore was a somewhat normal weather man. The only time I will look at it is to see live footage from places storms are going on they do take good footage.

Yup do not know why people even waste their time looking.  All they do is fake sensationalization stuff, i liked it back when there was john hope and Cantore was a somewhat normal weather man.  The only time I will look at it is to see live footage from places storms are going on they do take good footage.

I've wasted my time on there because before I stumbled onto this place, I was an ignorant weather watcher and TWC is all I had. Now I know better and just use them for laughs.

If I net 4 inches OTG when it's all said and done tomorrow I'll consider it a win.

Looks like the 6z/18z Euro will now be available on Tidbits.

Is this a reasonable setup for the 22nd-23rd? Or something not likely to come together?

lglickman1 wrote:Is this a reasonable setup for the 22nd-23rd?  Or something not likely to come together?

18z GFS had a monster bomb just off coast all snow especially big for LI, went sub 980 and then hooks into maine sub 970mb wow. has def potential if for real and falls in the spoken of time frames.

Next weekend's 1/22 threat looks highly correlated to how much a trough can dig.  And that will most likely depend on how vigorous the n/s s/w is as well as the ridging that sets up between the trough.  The GOM is open for business so if it sets up right it can deliver a nice event.  Probably won't know until Wednesday if this is viable.

If we can get a strong WAR then trough can dig more and EC heights can rise easier...

Euro is most aggressive ATTM 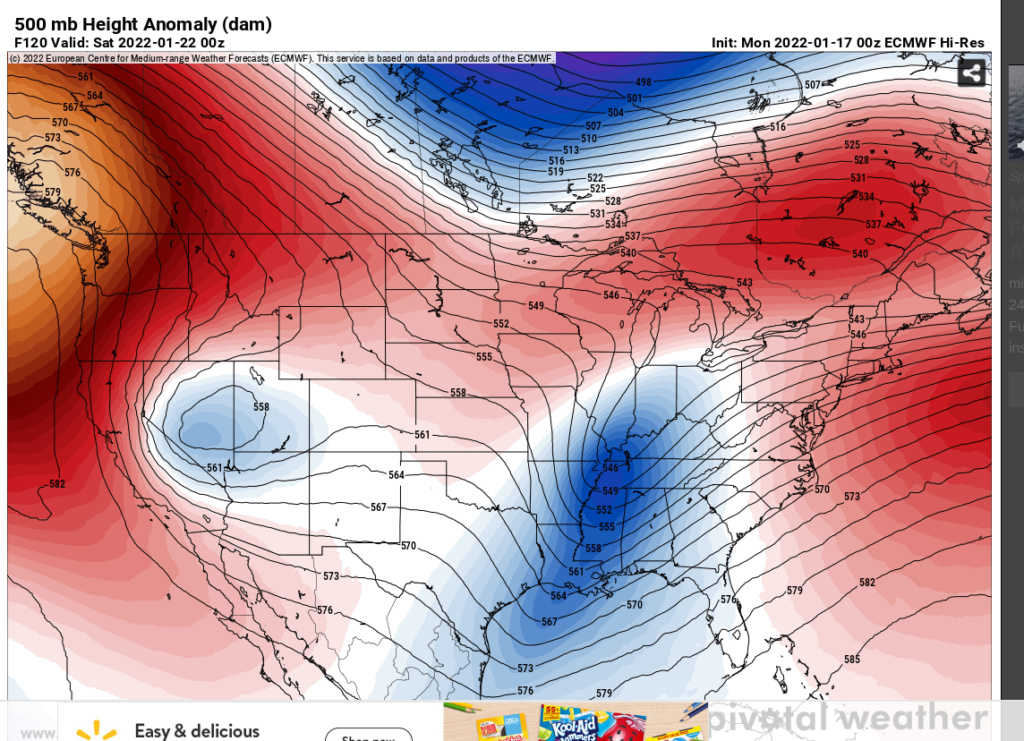 This one had the appearance of a potentially big system, but over the last 48 hours we have seen this threat fizzle just a little bit. Below is a look at the GFS upper air map valid for Friday the 21st. You can clearly see a trough and associated energy entering the eastern CONUS, but the trough is positively tilted and the energy is a little strung out. There's 2 reasons for that:

1. There's a very strong piece of northern energy that is cutting off over the western U.S., which is bringing the PNA down to negative. This prevents the trough over the east from consolidating the energy at the base and going neutral-negative. There's also another piece of energy over Texas that is being held back. So, we have all this upper energy being held back over western areas of the U.S. which means there's no opportunity for our northern energy to phase.

2. I did not denote it on the map, but if you look in south-central Canada near the Great Lakes we have a ridge rolling east which is also acting to disrupt the trough over the east. That's because just N&W of there we have even more pieces of upper energy coming out of the Pacific. At this time, the AO and NAO are also positive.

The end result is a strung out mess of energy over the east coast, and a surface low positioned well off the coast. So, I am not very enthused about this threat unless we can get the southern short waves over SW CONUS to eject east instead of getting held back. If that happens, and we end up seeing a phase, it could capture the trough and help bring a low up the coast. There's still time for these trends to occur. Let's see what happens over the next 2-3 days. 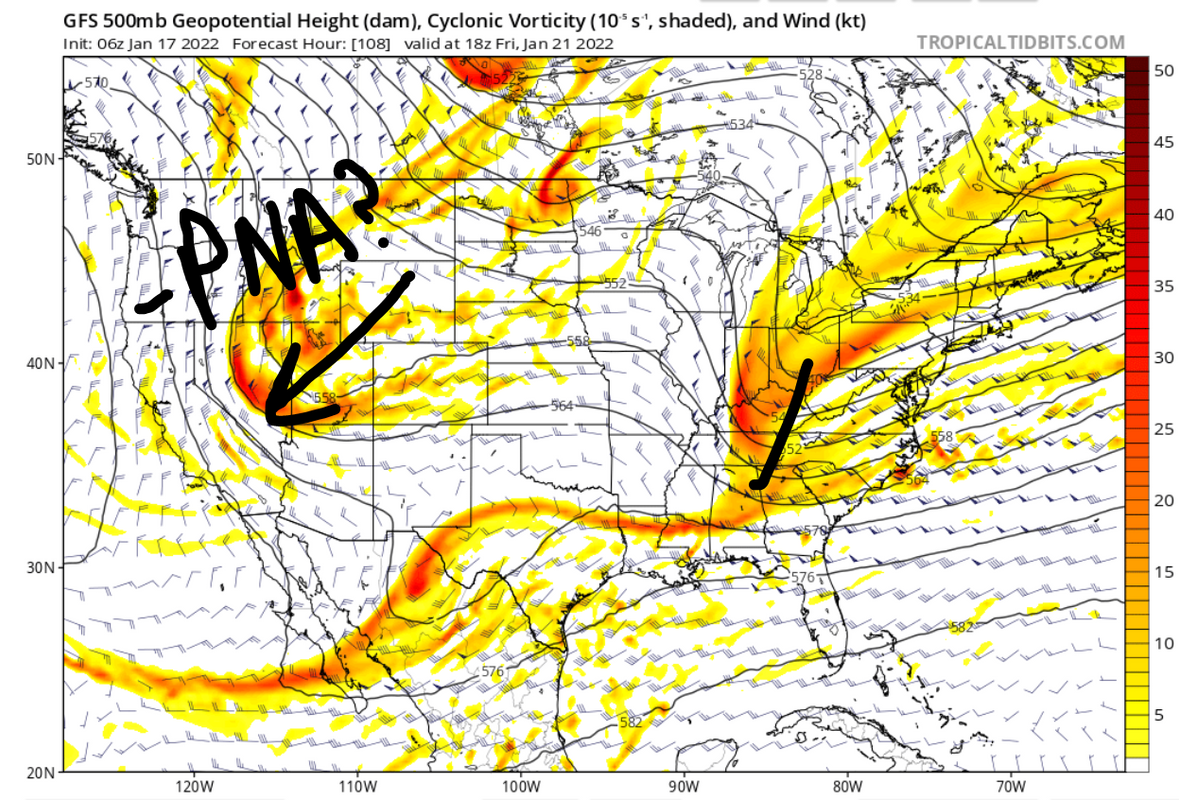 I've mentioned it earlier, but this is the time period I am favoring over the 23rd at this time. By this point, we are seeing some very interesting developments at 500mb.

Remember that ULL I circled in the other graphic in relation to the 23rd storm? Well by the time we get to the 25th, it finally moves out of the southwest U.S. and follows the jet east-northeast. Because of the aforementioned changes aloft, there's a very good chance this southern energy meets up with northern energy to create our next storm. I won't elaborate more beyond this point, but I really do like the upper level picture. Assuming these features do not change (i.e. NAO does not trend back to positive, etc.) then I am excited about a storm. 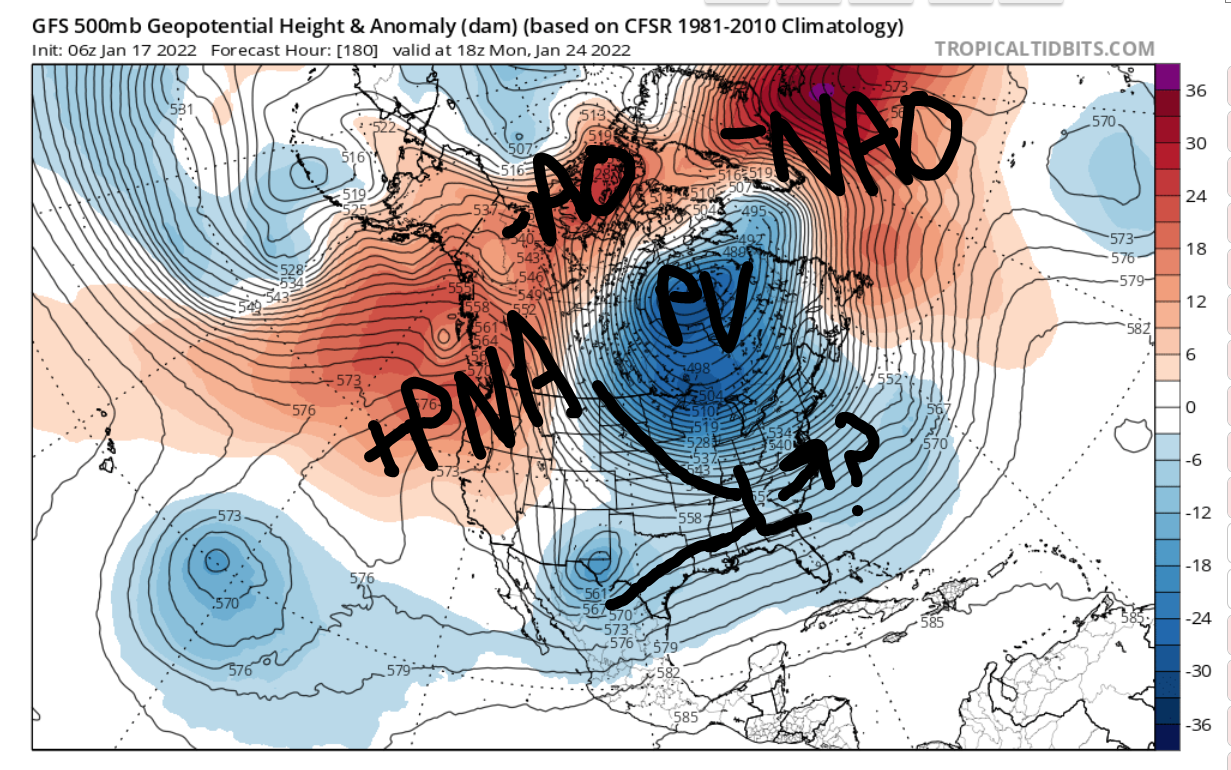 I am intrigued with weekend threat because some ingredients are there.  The issue I see with the GFS and how it differs from Euro solution is the TPV.  The GFS is much lower latitude with the TPV and kind of smashes the ridge which leads to a softer trough.  The n/s then cannot hookup with the subtropical moisture and it goes out to see.  As far as the H5 they are pretty similar...  We will need to see how that interaction with the TPV goes.  We don't want it to interfere with n/s-s/s interactions otherwise we'll be cold and dry. 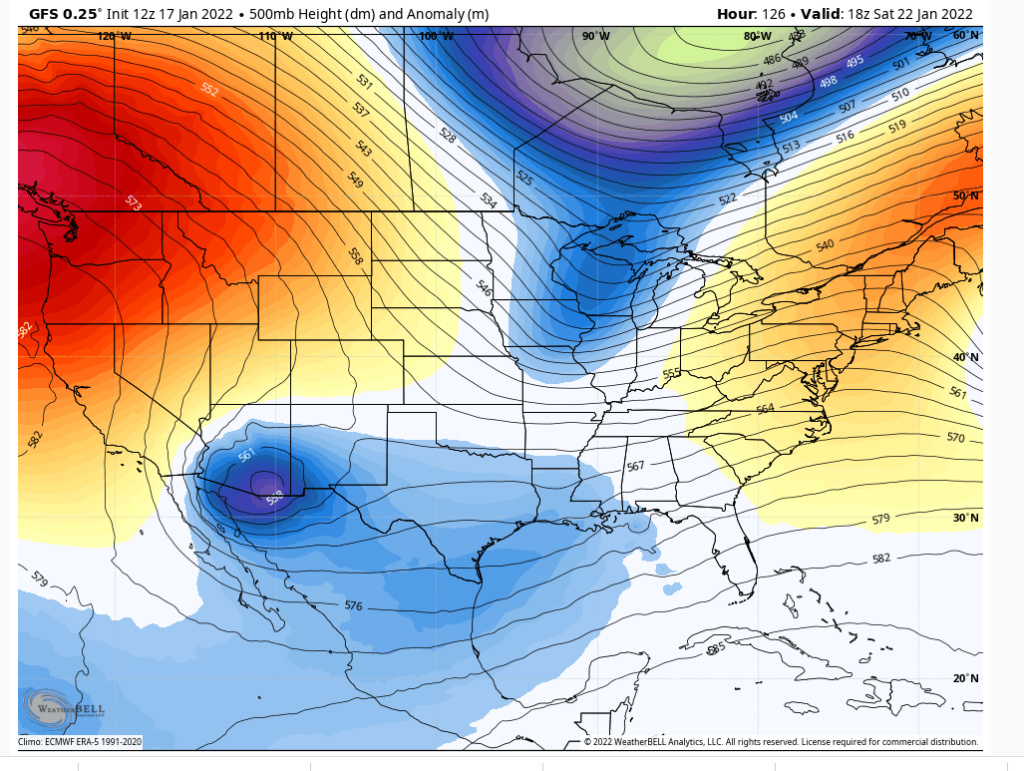 Ooof, this was close to a phase. Energy over TX ejected east-northeast and we're seeing the ridge amplify above the ULL. Not far from a coastal (this relates to the 23rd)

This mornings EPS continue a gradual trend of amplifying the mid level disturbance over the Ohio Valley this weekend. If this trend were to continue, we'd likely see the return of model solutions depicting a substantial coastal storm and winter weather threat in the Eastern US. pic.twitter.com/cfn0Bx7iqq

Good sign here with the cold air source of the EPO. Need PNA to respond + and get some NATL help. 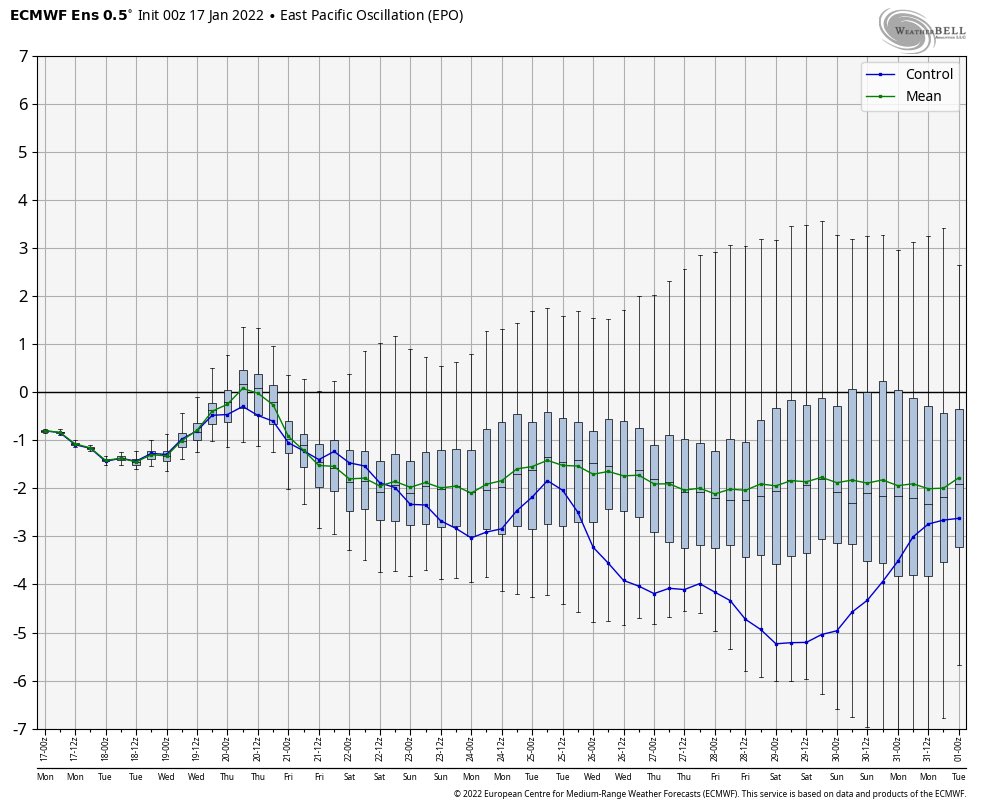 Euro likes the D5 weekend threat.  IMO the big differences I see are the Atlantic ridge is more robust on the Euro and allows the height to rise and bring storm up the coast and the western ridge is more intact as there is less interference from the TPV.  This allows the n/s trough to dig and hook up with the subtropical moisture. This may very may not verify, but pieces are there. 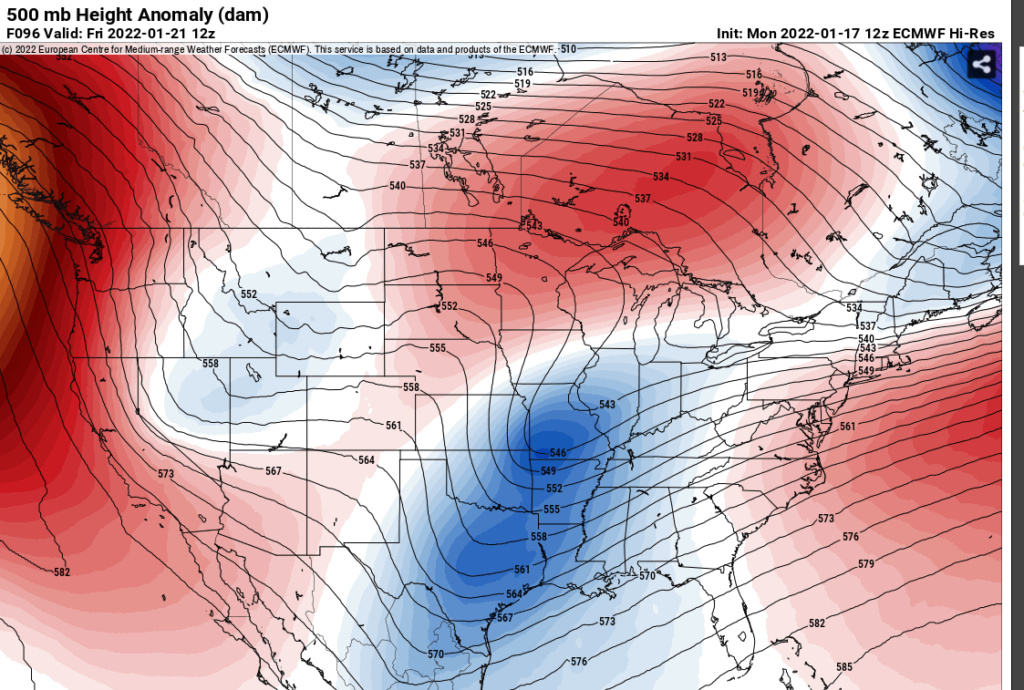 I will say this too. This last storm has much better height fields than were originally forecasted. Ridging in NE carved out a path of minimal resistance. That was seen on the models about D5.

Money shot. That is a beautiful 500 mb evolution peeps. This would be a BIGLY storm ....if it happens. Friday into Sat.

EURO just dropped a Roidzilla over the area this weekend

amugs wrote:Money shot. That is a beautiful 500 mb evolution peeps. This would be a BIGLY storm ....if it happens. Friday into Sat.

And here we go...  are we at serious tracking mode yet?

Back in the king Euro days I’d be jacked, but since it’s upgrade the model has been inconsistent. The 12z run peaked my interest and it’s a plausible scenario, but I’m not all in until I see more model support.