Southern portions of our area saw a nice snowfall yesterday. The precip did not get very far north, which I had a feeling would happen and is why I took this threat off the SCI list. But then almost all models showed some form of accumulation into NYC just 36 hours before and I figured the northern trend was real. That wasn’t the case, and the 2-4 call for NYC busted.

Luckily we can quickly forget and focus on the next storm threat for this Friday. This event also boils down to wave spacing. With yesterday’s storm, there was not sufficient space for the low pressure to amplify because of depressed heights over the region from last weekends cold front. So it stayed to our south. With Fridays event, I am noticing a similar trend. The NAM, which is the most aggressive with bringing Mothrazilla type of snow to the area, has the main energy digging into the OH valley ahead of an amplifying western ridge spike. Heights along the EC rise in response to the developing storm which allows the low pressure to stay near the coast and lash the area with heavy snow. GFS does not think the upper air energy will dig like the NAM has it. Mostly because of a more flatter western ridge and lower heights along the EC due to a separate piece of upper energy that’s dragged across New England. The atmosphere looks “too busy” on the GFS whereas on the NAM things are falling into place smoother.

2 things need to happen for a sig event IMO. 1/The 500mb trough must stay somewhat close to the coast or this storm won't have the space to come up. 2/The shortwave must have some spin to it and then will depend on the ridging out west I think.

GFS ensembles mean low pressure is inside BM last few runs and it's more potent than before. Euro ensembles are keeping the wave around BM and less potent at our latitude. The difference is how far the 500mb trough is being placed.

Frank is absolutely correct that we don't have the necessary clarity on this one yet, however just based on synoptics I think moderate event is a realistic possibility ATTM.

Unless the mid-level storm tracks right over your area precip should be mostly snow on this one. This is absolutely not the setup for rain/sleet unless the system tracks pretty much overhead or to your west. That banana high is classic look. 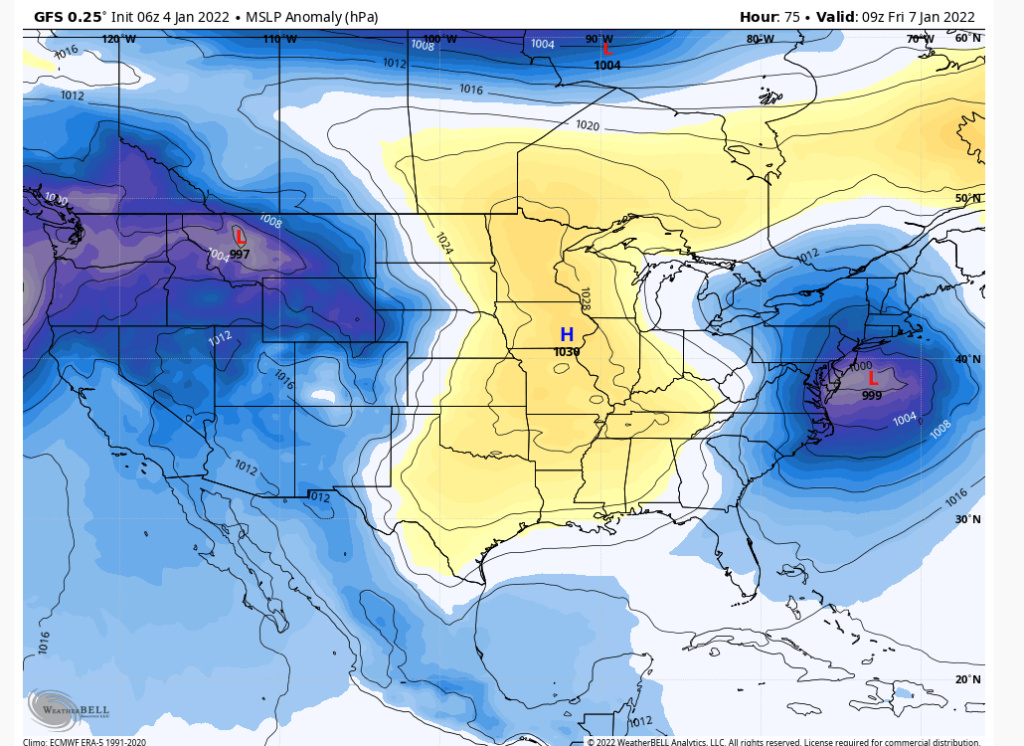 Given the progressive flow, I assume this would be a quick hitter, maybe a 12ish hour event ?

dsix85 wrote:Given the progressive flow, I assume this would be a quick hitter, maybe a 12ish hour event ?

dsix85 wrote:Given the progressive flow, I assume this would be a quick hitter, maybe a 12ish hour event ?

Critical feature to monitor. W/the height field compressed over the NE, that limits the ceiling as the follow-up wave's ability to amplify is curtailed. But it also prevents a storm track inland. 12z NAM follows suit w/this feature, but plenty of time for changes in this regard. https://t.co/kFL9v8kaw5 pic.twitter.com/WA00UsYJVF

I don't think this is going inland, but I do think inside BM track is very possible. This kind of trough tilt would kick back precip well inland. It would also going to capture the mid-level energy and tend to tuck it. Is it right, we don't know yet of course. 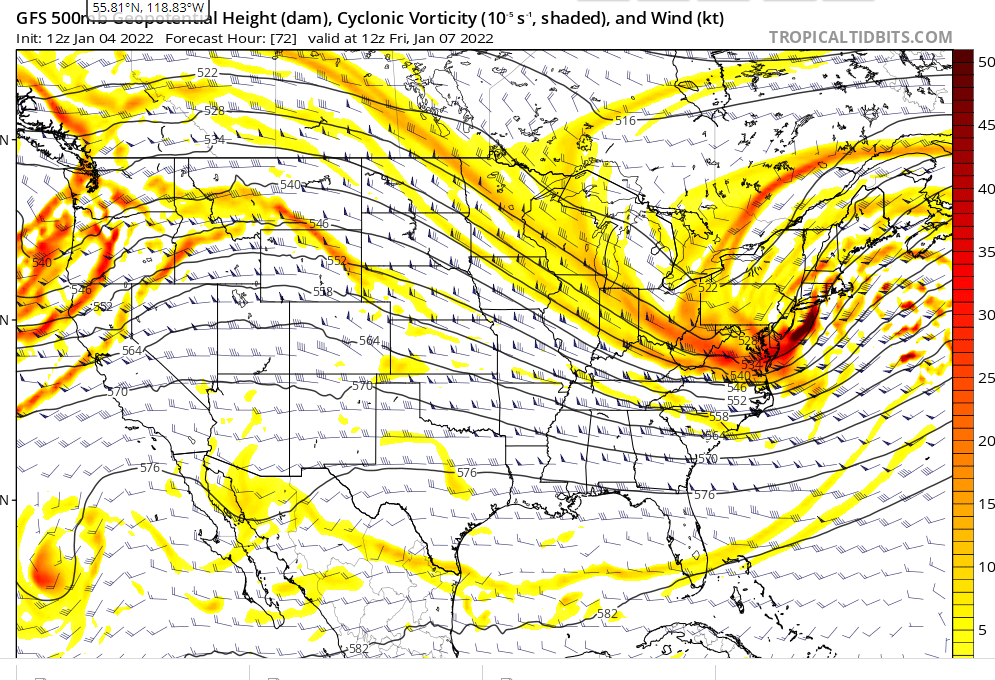 GFS ensembles 12Z. The low exits the coast at a very favorable location for this latitude (south of DE). The models are trying to kick the low out due east and then NE to the BM. Instead of taking the low more NE to begin with. That is the critical time here. Does the mid-level energy get pulled in by the ULL which will deepen it more quickly or does it run ahead of it and then get pulled back too late to give sig snow for our area? It's very typical at D2+ for models to struggle with this and no one really will have an answer until at earliest tomorrow afternoon IMO.

Happy 2022, everyone! Nice to see this thread is alive & well for the Tri-State's best snowstorm signal of the season thus far. MET's across the region are beginning to buy in as well...

Not a miller A solution but a Miller B but like his thinking - very good at this meteorologically.
Nikhil Trivedi 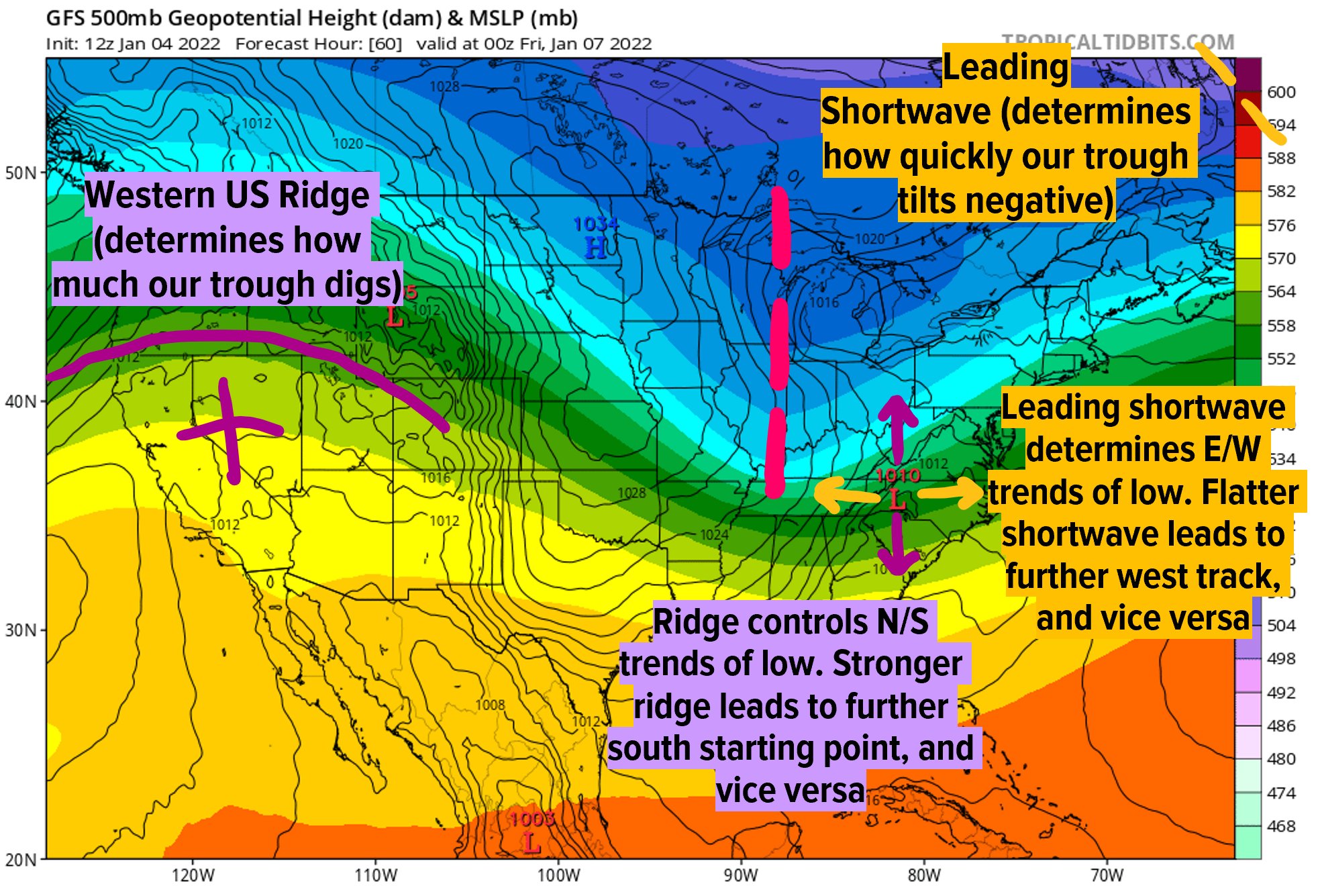 12Z Euro is just yuck. Much flatter trough that gets spread way too far off coast, bad spacing between the ULL and the mid-level energy as a result. I'll wait until tomorrow 12Z for some positive changes, but today's 12Z runs on most guidance are no bueno.

I have to say - while this week may prove quite frustrating for snow lovers like most of us - what an opportunity it seems to me for newcomers to really learn about the delicate interplay of different factors to make or break storms for us. Really great learning opportunities this week. And though I personally feel it will end in disappointment, I’m with Ray and Mugs…it’ll all be a distant memory soon enough!

Overall not great trends on today's 12z suite. Let's see if the usual trend NW happens over the next 24-36 hours

The main reason I'm skeptical we'll see a shift is that precipitation is much less correlated with low-level warm air advection & frontogenesis than other storms (compare red+purple max here to snow above).

These are often a basis for snowbands shifting north in my experience... pic.twitter.com/t3OfxugKY4

Updated 12z GEFS tracks. Control is near 40/70 with a fairly tight cluster to the ESE and quite a few off to the WNW pic.twitter.com/1M4udMeyrN

EPS further SE - the storm tomorrow vorticity is stronger on teh EURO and EPS doesn't allow heights to recover so the storm can climb in latitude and slips ESE.
Vort is stronger and WC ridge is fine just need that energy to lift up and out faster and be weaker. Need a bit more separation for this to work well for our area.

amugs wrote:EPS further SE - the storm tomorrow vorticity is stronger on teh EURO and EPS doesn't allow heights to recover so the storm can climb in latitude and slips ESE.
Vort is stronger and WC ridge is fine just need that energy to lift up and out faster and be weaker. Need a bit more separation for this to work well for our area. 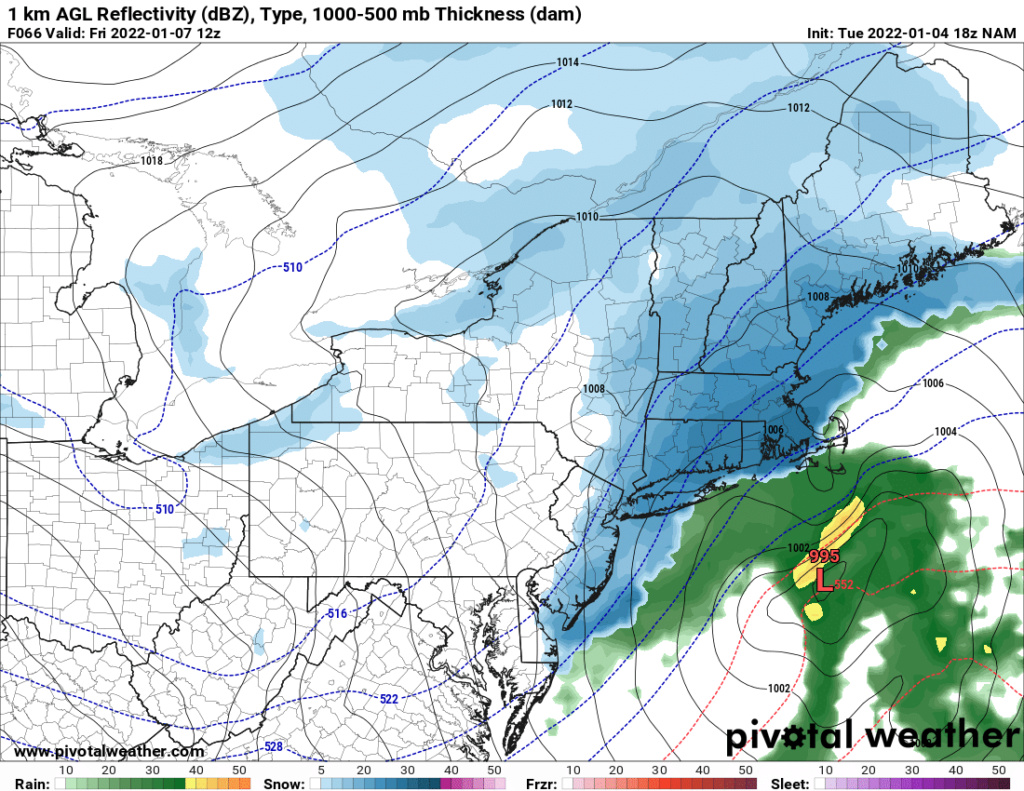 If the wave spacing is affecting the sharpness of the 500mb trough then I totally agree. But i would attribute that to the west coast ridge too.  It's clear based on what i'm looking at that when the trough digs and sharpens it's able to provide the good space so that the s/w energy can be pulled up the coast.  When that trough is flatter is fills up the space and kicks it out. It may just depend on if the energy is vigorous or not. Garbage s/w and nothing may matter for us.

Hope that changes because boring comes to mind with this depiction as is.