When in doubt in ICON we trust:

sroc4 wrote:When in doubt in ICON we trust:

NWS seems to be onboard for a minor event. My local forecast is saying 1-3". They rarely predict totals this far out. 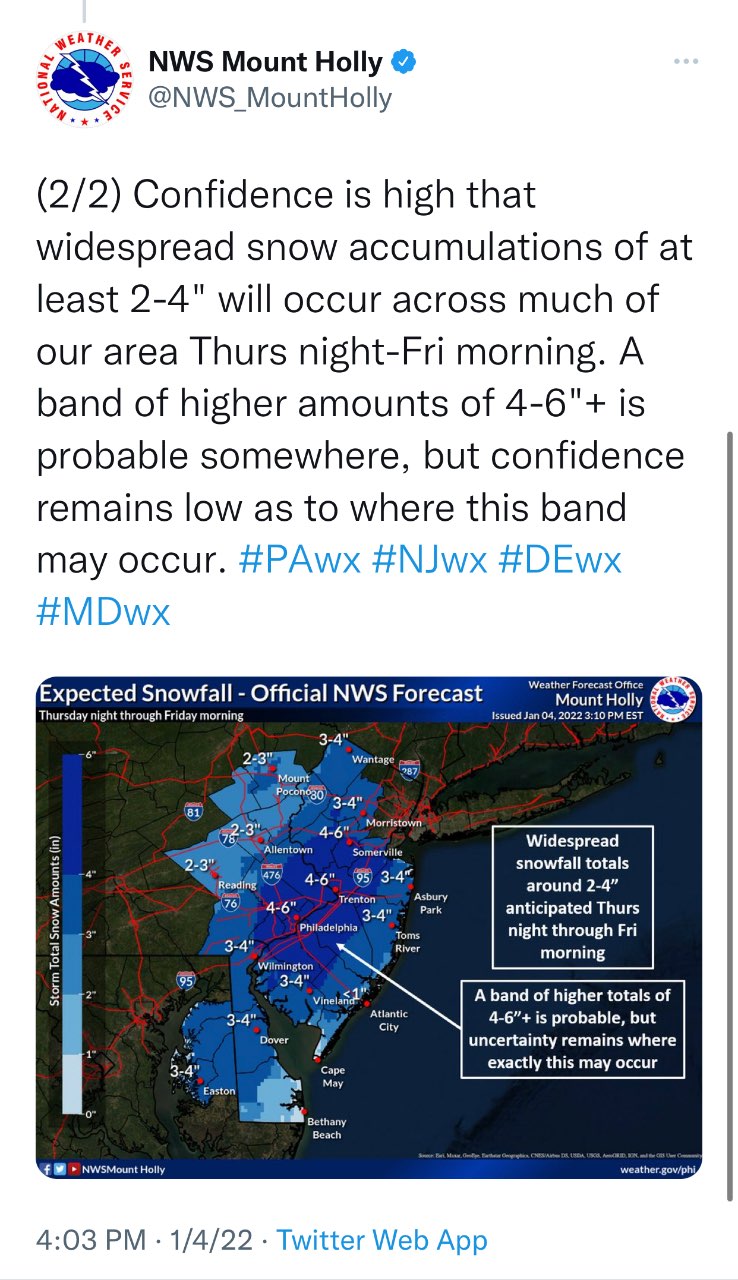 Energy will be moving onshore of the Pacific northwest coast
Wednesday and this will amplify a trough over the central states to
the southern Appalachians Thursday into Thursday night. The latest
forecast trend is for a deeper trough, and therefore passing a
little farther to the south, as the associated surface low deepens
and moves off the mid Atlantic Thursday night. Upper jet streaks and
a developing strong low level jet will allow the low to deepen
quickly from late Thursday night into Friday afternoon as the low
passes to the south and then east of Long Island. Currently the low
tracks is just to the east of the benchmark Friday morning. With this
track the heaviest precipitation remains offshore. There will br
cold air in place, and the evening will be mainly snow. Some rain
may mix in along the coast and eastern Long Island at the beginning
Thursday night, and again later Friday. Timing has the bulk of the
snow falling late Thursday night into early Friday morning, with
advisory level snowfall likely across the forecast region, with the
highest totals across northeastern New Jersey, New York City, and
Long Island. Snow ratio look to be about average at 10 to 1 through
the majority of the event. However, a shift of the low track farther
to the north and west could bring higher snowfall totals as the
pcpn likely remains all snow. With the progressive flow the
storm will be quick moving and the precipitation will be ending
during the day Friday. 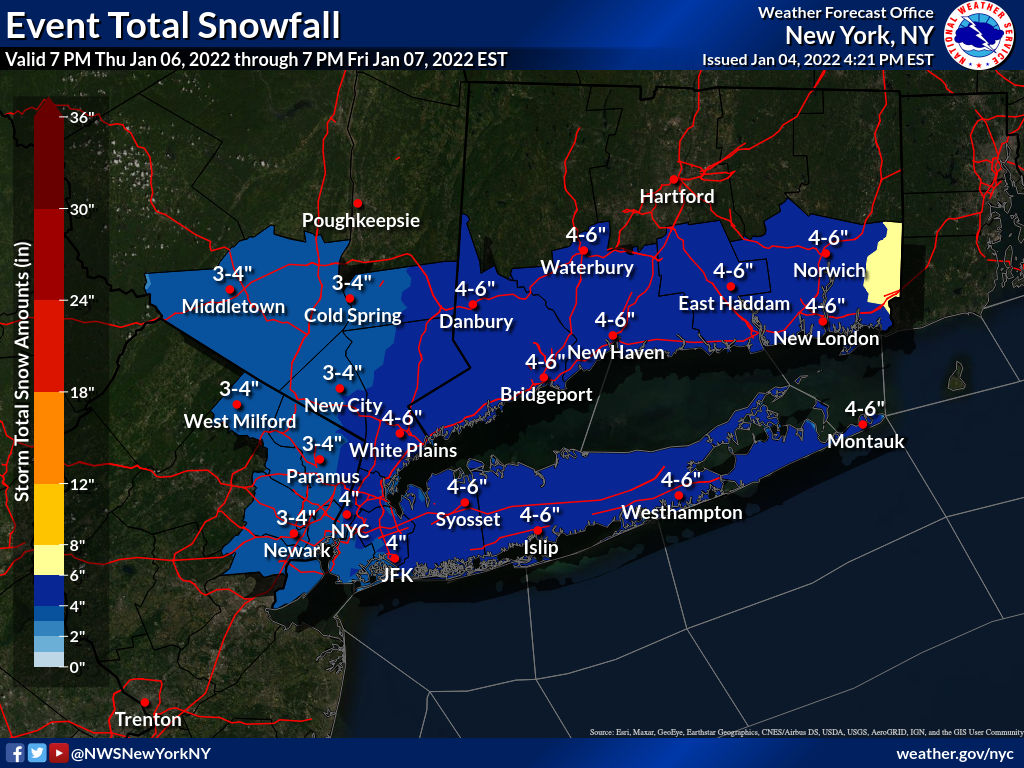 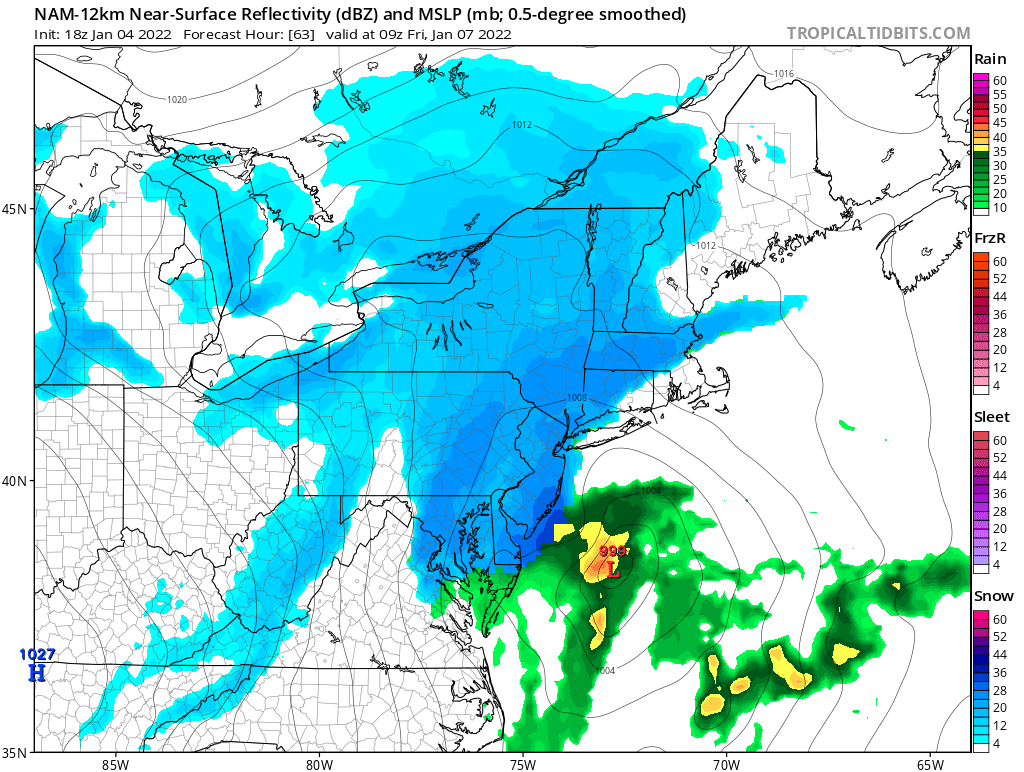 Accuweather changing up their maps.  I think at this point anyone I-95 and NW would be thrilled with a moderate event based on today's runs.  They will be way underdone in Maine if this ULL catches up with its mid-level energy at the BM. 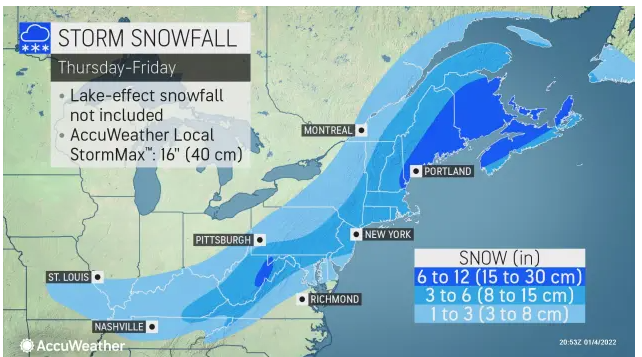 NWS Mt Holly first snow map is consistent with Accuweather: 3-4” statewide in NJ with a band of 4-6” along the I-95, with the heavier band location still uncertain. That seems where consensus is headed and would be a nice event given what little winter most of us have had so far.

Nice shift west on the 18z EPS compared to 12z.

heehaw453 wrote:Accuweather changing up their maps.  I think at this point anyone I-95 and NW would be thrilled with a moderate event based on today's runs.  They will be way underdone in Maine if this ULL catches up with its mid-level energy at the BM.

I guess they’re not buying into the 12Z model runs. Neither am I. Even with a progressive pattern, the vort is impressive which will in all likelihood cause the trough to go negative. I expect a correction westward at 0z.

Yes there is still much uncertainty on the low pressure track as shown by the EPS members.  Some of these members show good intensification. 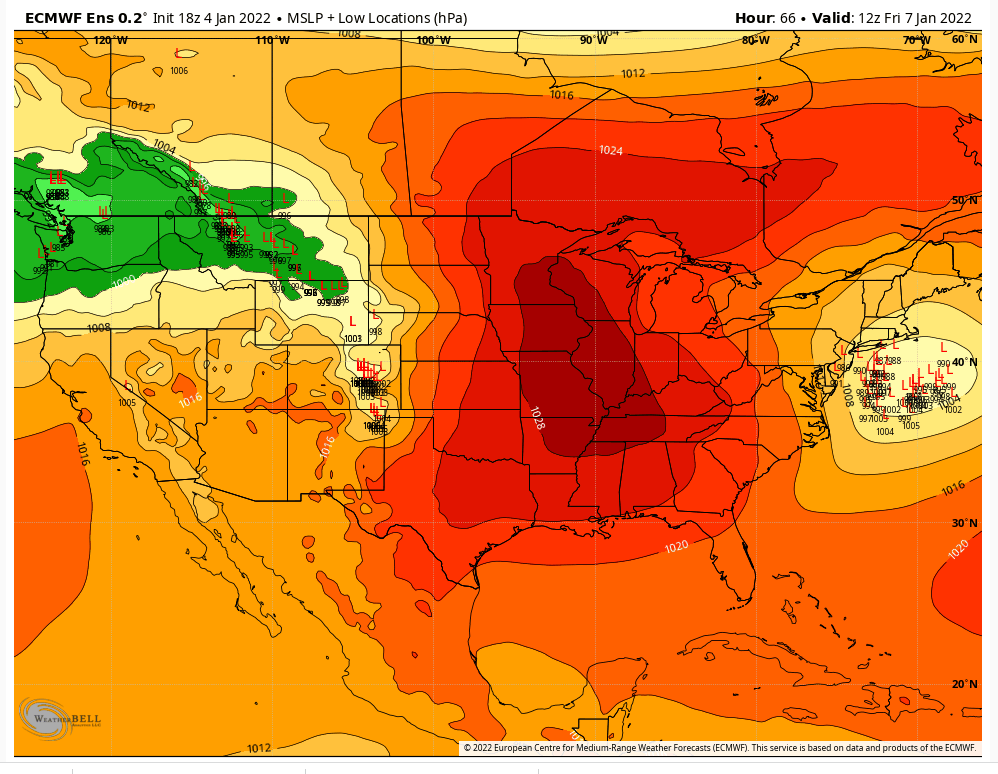 where do i sign? I would be happy with uptons call right now, anything more would be gravy. really hope to get to take my daughter on her first sledding this year. 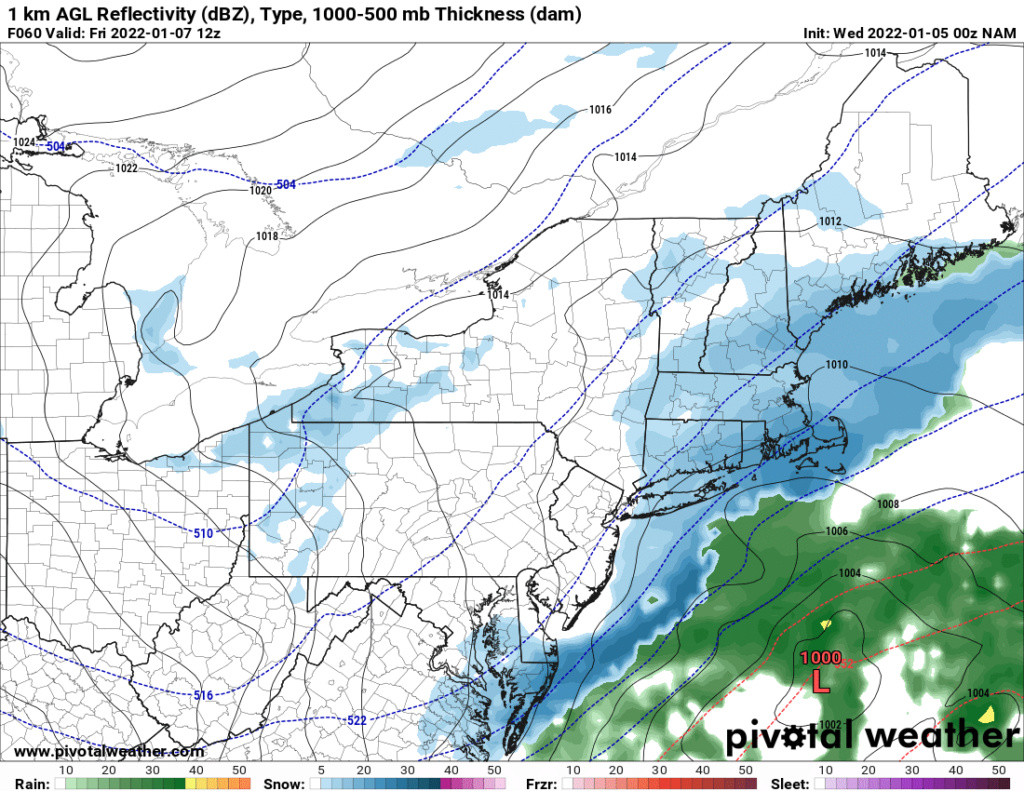 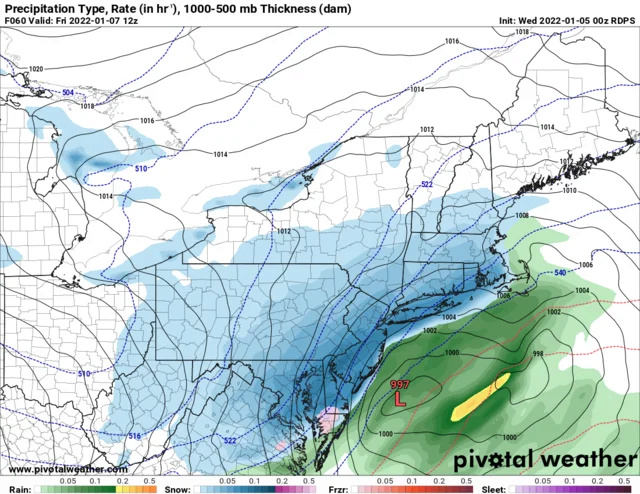 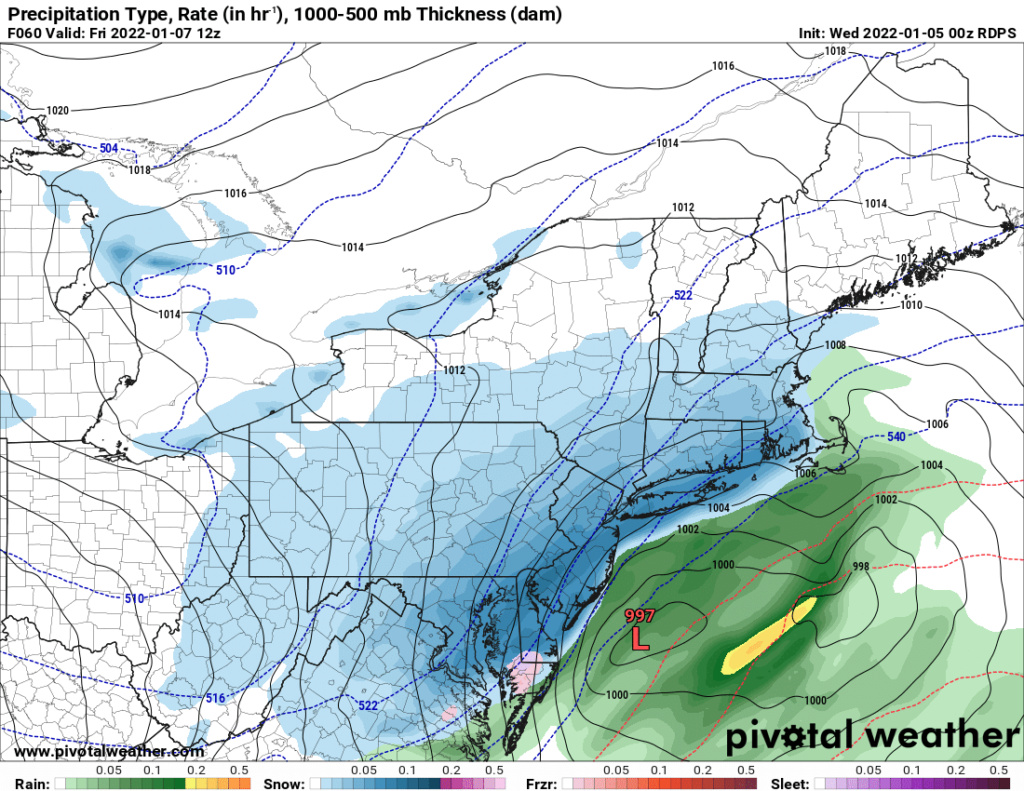 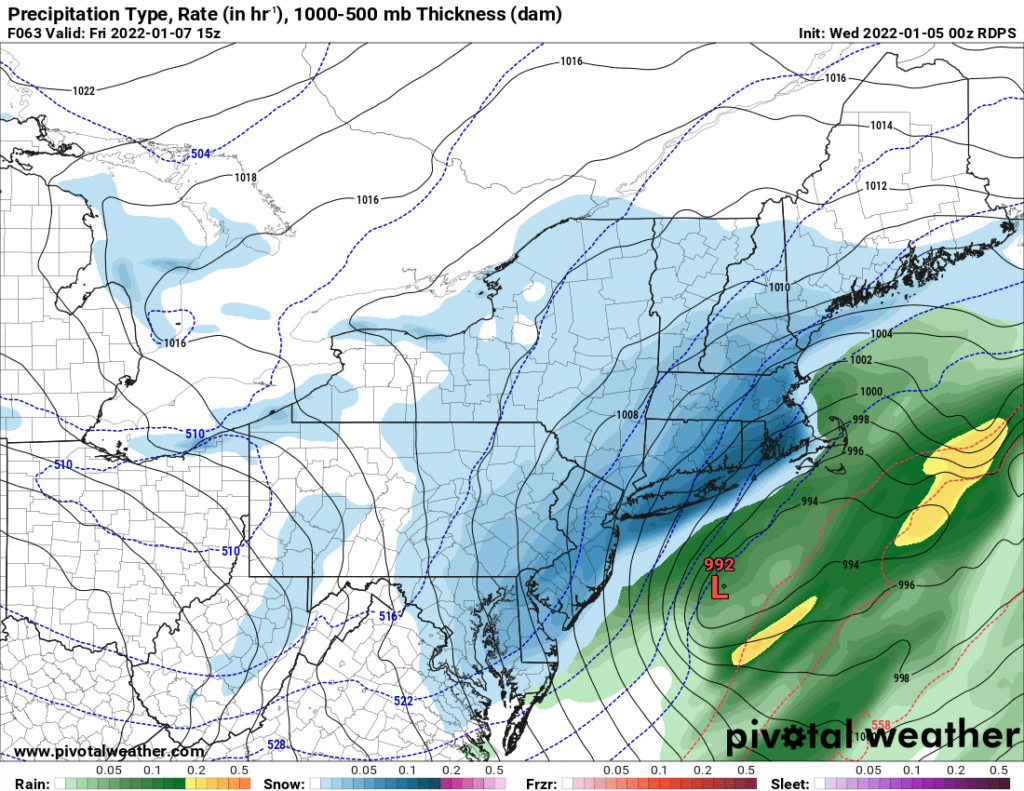 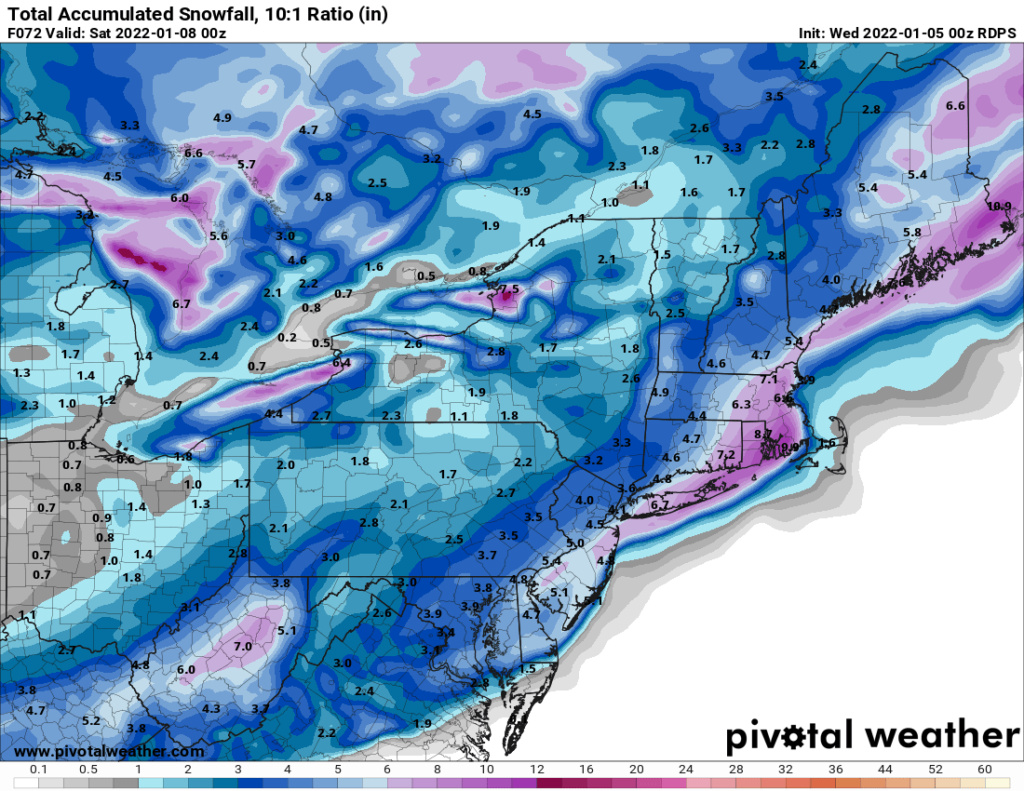 Aside from the NAM, some pretty good runs so far late this afternoon and tonight. Like the idea of a 2-4/3-6" type of event for most on the board

CMC showing one of the best case scenarios. Widespread 4-6". Coast seems in the best spot here, even the more amped western solutions are cold enough to keep everyone snow. No real mixing issue with the western solutions unless the low goes over you

6z Euro is west, looking a bit more like the meso models. Pretty much just leaves the GFS in the eastern camp

As one would expect guidance on the track is all over the place. Some hugging the coast and others east of the BM. 06Z Euro op is BM track, but ensembles are well east of BM. More clarity today's runs most likely. Due to the cold temps I think 2-4" is reasonable expectation and any more depends on the strength of the s/w. If that is vigorous it will will tend to hug the coast more (as per Canadian) and parts of the area will have a shot at 6".