We are approaching a critical moment in time when models will begin converging on a solution for Saturday's storm. To this point, we have seen drastic run to run differences that have lead to loud and dramatic outbursts, above normal perspiration and the name of my first child (only if you have been following will you get this).

We have also seen one of our very own members sacrifice themselves for the month of February. Our dearly beloved  @CPcantmeasuresnow. Its because of him I felt compelled to start a thread to track this monster of a storm. It is indeed a monster with incredible opportunity.

Here is a comparison GIF of the 06z GFS and 06z EURO at the 500mb level. The former shows a scraper with minimal impact while the latter brings Roidzilla impacts to our area. This is a snapshot of Thursday night.

Amazing that the EURO is actually the furthest west with our initial disturbance (southern branch) than the GFS. You can see it is dug nicely into the 4 corners. But that is actually not the issue...it is the northern branch, or energy that is over the Dakotas. Notice how on the EURO it's placed further west, while the GFS is east of the EURO. Because of this, the northern and southern branches are not vertically aligned (on either models, but especially the GFS).

Here we are Friday afternoon. Not a whole lot of differences with our western ridge axis but vast differences downstream. Notice how on the EURO, the northern energy is 'pointed' southward. Almost like a pencil. On the GFS its pretty scattered over the Great Lakes, and we're seeing a more positively tilted trough. Both models are hanging back some southern energy over Texas, however. I think the main takeaway is the EURO is digging this energy into the backside of the trough. Notice the orange colors over Oklahoma and Kansas on the EURO compared to GFS. This is extremely important because it's clearly moving toward a full latitude phase between both branches of energy.

This takes us to Saturday morning. EURO maintains a better ridge axis as the ULL off west coast is more west, keeping the ridge intact and preventing it from rolling east. On the GFS it is slipping a bit, and the whole evolution of the trough is thrown off. The EURO keeps the trough neutral and on a path toward negative, while closing off at 500mb and capturing the surface low. Meaning, the storm off the coast has been captured and tugged closer to the coast, hence why the 06z EURO showed Roidzilla conditions.

Because I'm a dreamer I show the 06Z Euro Control. An absolute beast that deepens at a very ideal spot. 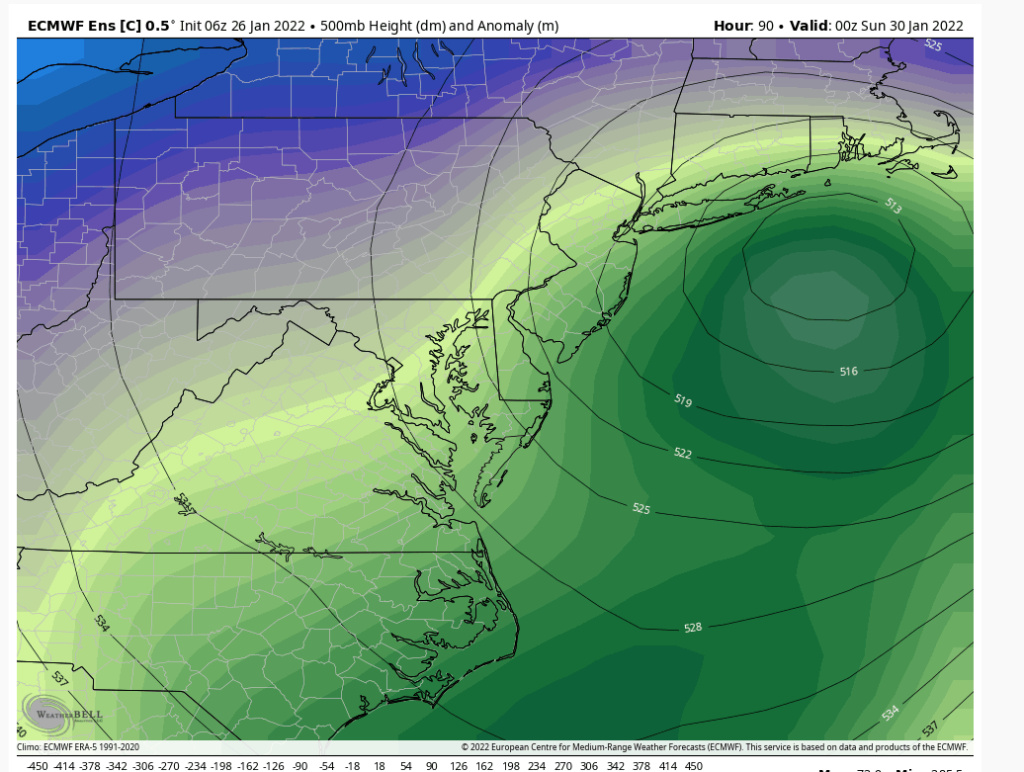 Thanks for the explanation Frank, sounds intriguing and doable. I thought the issue was the southern energy holding back but we determined that wasn't the issue? Is that what you're saying. thats interesting. Hoping to see all senarious like Euro show today, It isn't good that this looks like it may creep up on many people, it is only wed but that leaves tomorrow to prepare, and wouldnt they be issuing watches by tonight? I think its what 36 or 48 hrs b4 for watches and 24 hrs for warnings? Nonetheless whether it happens or not you guys put so much effort in and keep your cool which if I put as much work into it and it busted I would be very sour. Guess thats why I am not you or a admin which is okay with me : )

NAM is better...northern energy is pointing south and tugged west a bit

While very tricky, once our crew here gets done with it, it becomes VERY understandable. It’s all about what happens in that 500vort screen- and hopefully seeing that red glow hit Oklahoma and Kansas and watching the energy streams phase together! Please please please! lol

The last couple of days been straight up exhilarating and harrowing. And truthfully, the Shore (not so much LI I think) is exactly one model consensus lean to the East to being in 1-3”. And it’s just now the time where being in the bullseye is NOT where you want to be. Unless of course you been there all week, then you just sit paralyzed staring at the screens…praying it all stays the same and doesn’t change once…then get it into the short range models hands and just pray.

So far, best week ever!!!! And remember, we still need the phase of course, but we are just now hitting the time of the most recurring trend there is, right of track bias, aka the 24-48 nw trend…let’s see. 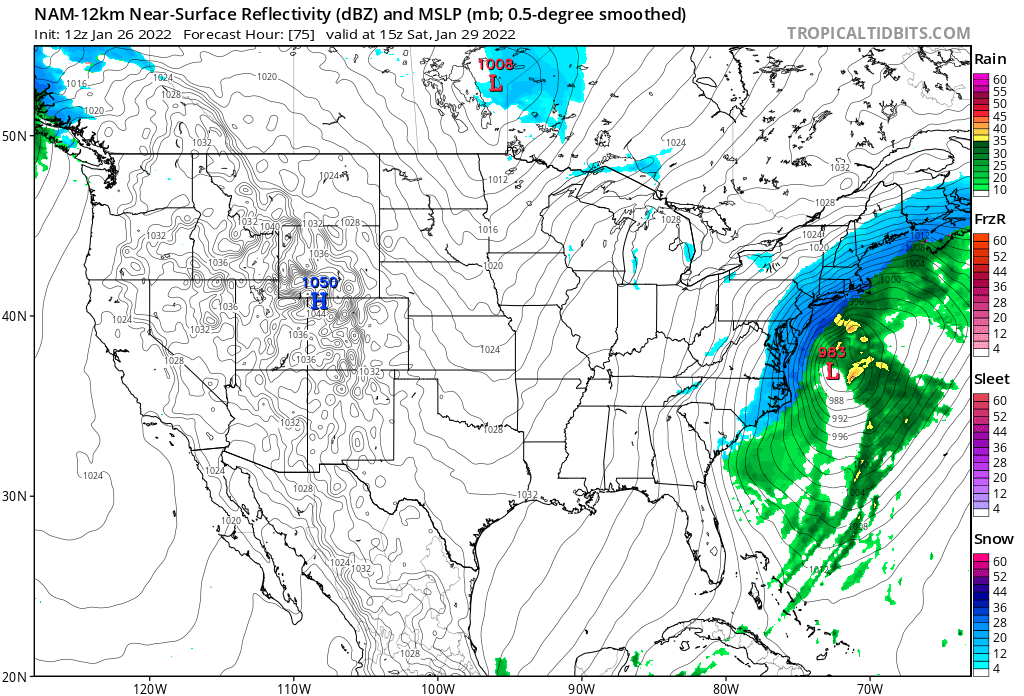 This is the same time stamp, this would be a roid, look at south jersey already!! 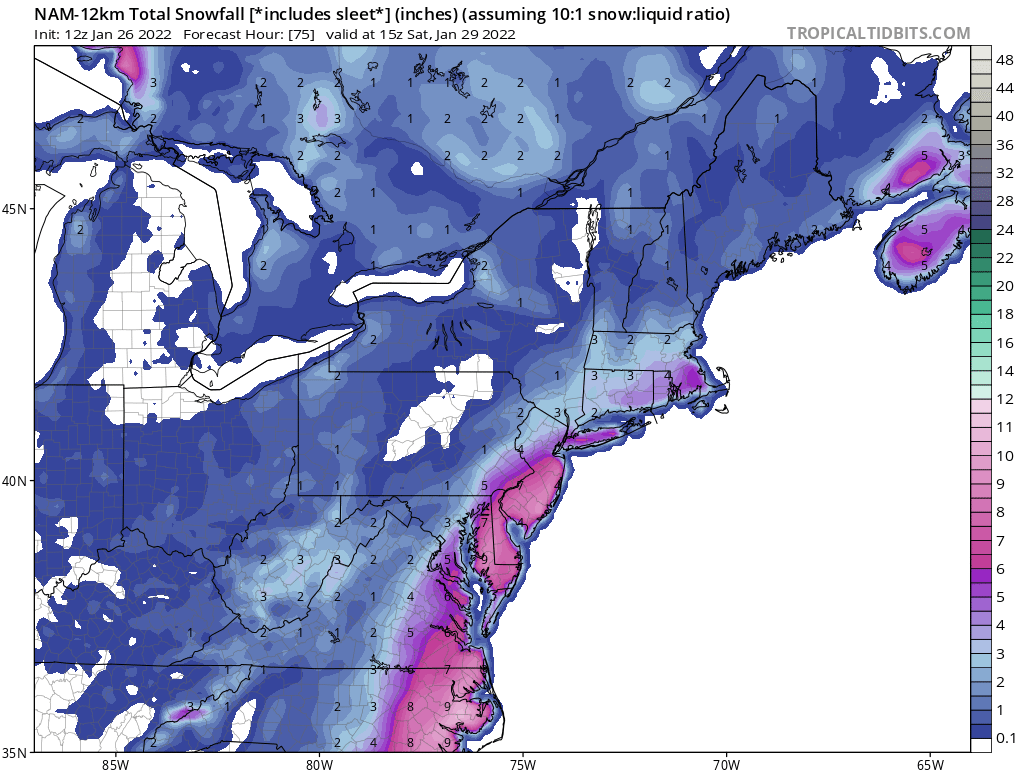 The ULL completely closed off around the Delmarva with negatively tilted trough. Great run.

ULL completely closing off. Had to do with a better phase more meridional injection into the base of the trough. It's Euro-esque solution 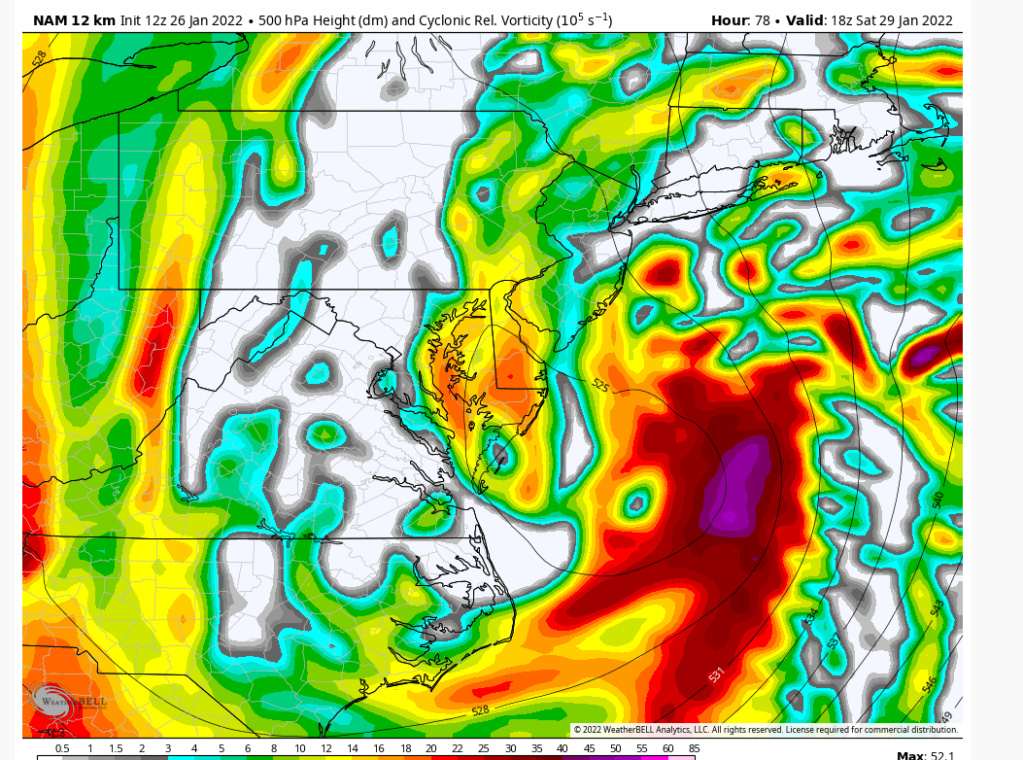 AND STILL SNOWING! HERE IS THE SNOW MAP AND SURFACE MAP. 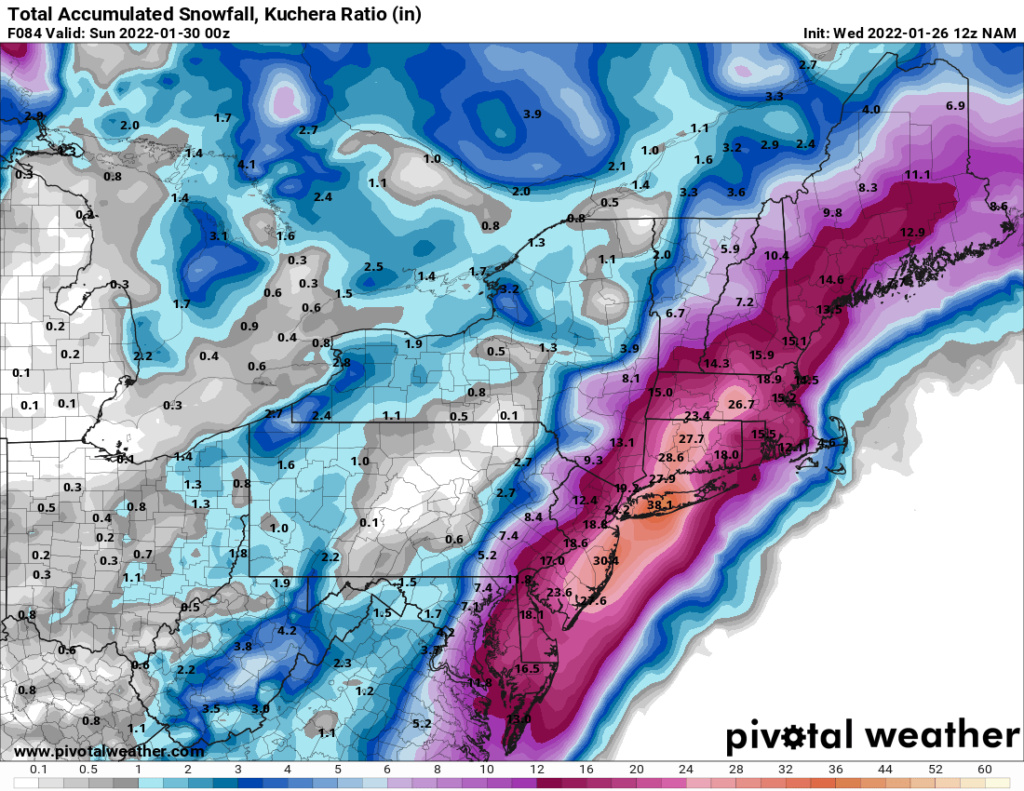 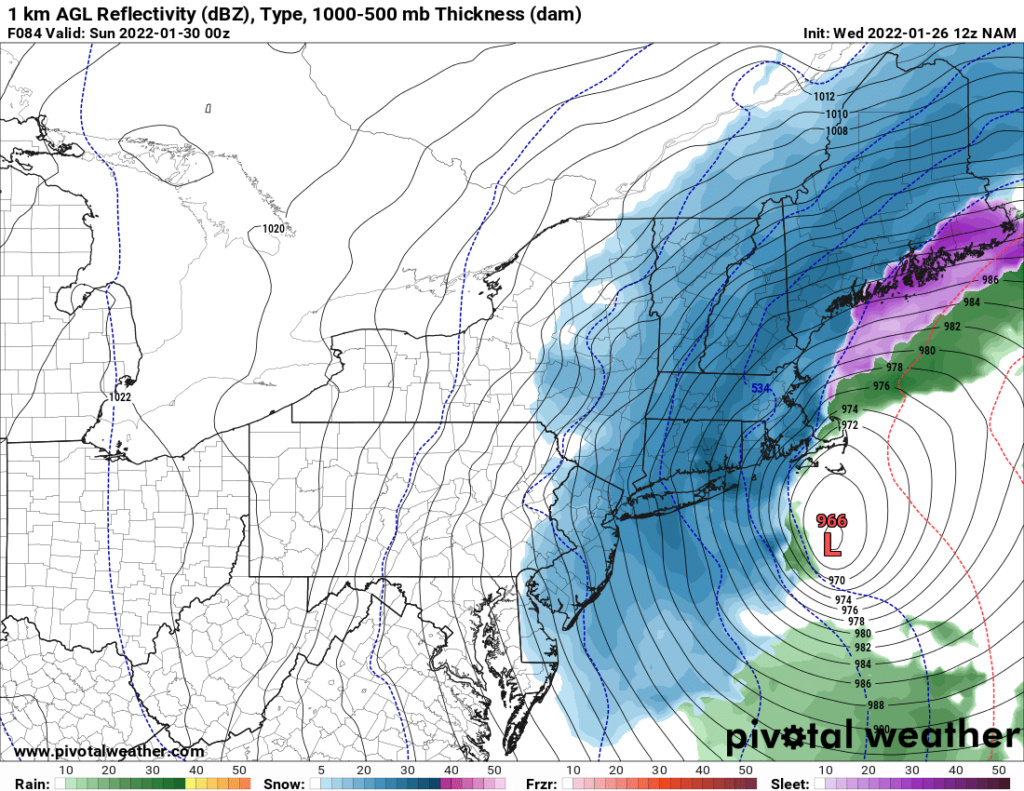 For the NAM, is the much improved part within it's 60 hour window? I know we can't look much at it once it gets here which is outside that 60 hour window, but some of what is happening in the Southwest and around, say, Oklahoma, is that within the 60 hour window and thus that part might be somewhat more reliable?

It's going to come down to that n/s energy. It's encouraging that as sampling is occurring we are not walking backwards. Still have to be really cautious IMO.

Just another thing on this is this can tuck much further than what is being shown. and stall somewhere if it deepens like progged. 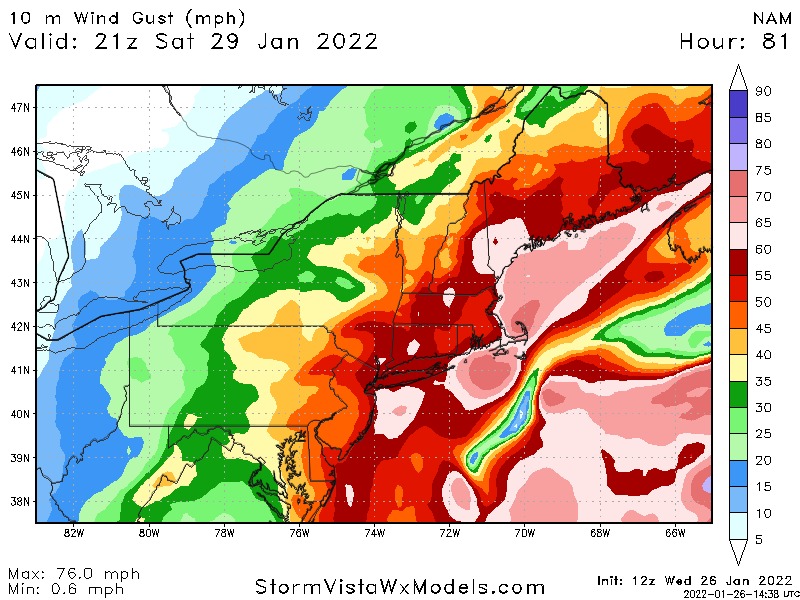 Temps 0-10 above. Talk about ratios 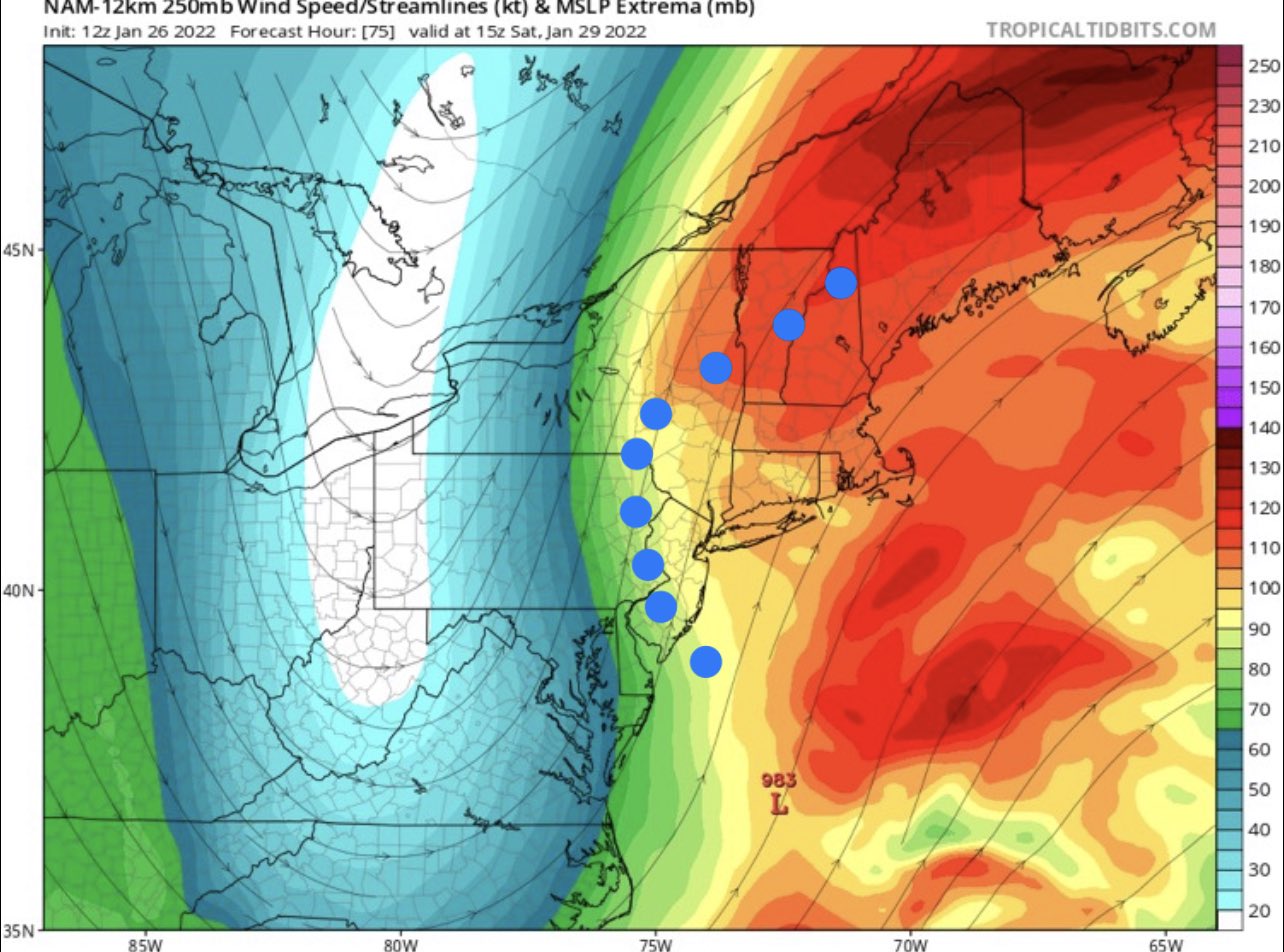 It could all turn bad - but consider that the NAM and Euro are run at superior resolutions to most others. I have to wonder if that’s at play here. If so, even though I am admittedly biased, this will trend towards a classic inside benchmark track and widespread 1-2’ storm. Things like favorable jet streak, and moisture transfer, and banding, and latent heat release are all still hanging out there for the higher res shorter range models. I like where things stand, cautiously optimistic.

Yes SRCO said 15:1 and some 20:1 plus - seriously may rival the great 1899 Arctic Outbreaks Strom that had rations 20-30:1 up and down the entire east coast. AS we get closer we can hone in on the finer details but lets get tehre first peeps.

Need the other 12Z models to hold and the EURO to give us some Petty Lovin - "Won't Back Down" CP your man and for teh sacrifice of the good I shall join you in snowstorm weather martyrdom my good man as I was once the self proclaimed "King Snow Weenie" back in the day!! God' speed to you all and have patience, logic, and reasoning as we move forward with our model runs peeps.

Nice for a change to see that the abnormally warm waters will be supplying a lot of energy and moisture into this system without dealing with a changeover to rain. (at least so far!)

MattyICE wrote:It could all turn bad - but consider that the NAM and Euro are run at superior resolutions to most others. I have to wonder if that’s at play here. If so, even though I am admittedly biased, this will trend towards a classic inside benchmark track and widespread 1-2’ storm. Things like favorable jet streak, and moisture transfer, and banding, and latent heat release are all still hanging out there for the higher res shorter range models. I like where things stand, cautiously optimistic.

Rayno was harping on this all last night and yesterday about an IBM or BM track maybe a hair East. He firmly believes 2 things:
1. If it closes off at Delmarva of say ACY CNJ, NYC and NNJ up get pummeled as does SNE
2. If it stays a tad east and closes off at Montauk NYC and NENJ are in the game if occludes and retrogrades towards the Conn Border or jest west and SNE gets pummeled, smoked.