06z clips its edge with cape cod but theres that east trend frank othersvandJB felt might happen. Are we still far off from being in the clar cuz it seems like the models really are worse off than b4. NHC modified their track and has a strong TS paralllel the jrsy coastline nearly identical cone to irene. And wow we move to tuesday now. Look at thread title was supposed to be 4 days earlier.

Agreed this is so far out no way we can believe a track yet. Although I think it's going out to see.

What do the 0Z EURO ensembles show?

@Tzvi732 wrote:Agreed this is so far out no way we can believe a track yet. Although I think it's going out to see.

Agreed.as long as the trends continue.And even if not in no way can we say it's a sandy like the 0z GFS showed.

Unbelievable that we can only trust one computer model with such a risk at hand. What a turn of events.

Hearing theyre expecting a strong east trend to euro today, seriously these models are so bad they shouldnt go past 3 days, what the hells the point...

@NjWeatherGuy wrote:Hearing theyre expecting a strong east trend to euro today, seriously these models are so bad they shouldnt go past 3 days, what the hells the point...

You're starting to catch on

The two images below are off the 500 hPa spaghettis, 00z followed by 06z for the same time.

Look at the difference in how they handle the trough. In the 00z suite, the trough has yet to close off, which allows it to continue to dig southeastward. Because it is still digging, there is enough of an interaction with Joaquin to start brining it westward BEFORE the trough closes off.

In 06z, the trough is already completely closed off. Why is this important? When a trough closes off, it means that it has reached maturity; in essence, it has dug as far south as it ever will, and it will begin to weaken after this point, since there is no more energy being fed into it from the mid-latitude jet. Because of this, the trough has drastically slowed its southeastward progression, and is instead losing its ability to capture Joaquin. As a result, the two systems remain completely separate, and Joaquin is allowed to recurve like it normally would. If this does end up to be the case, where H5 closes off early, I think we'll be fine. Just my opinion.

Interesting...very very interesting.  I am going to cont to look at modeling, but some key observations over the next 24hrs could tell a lot.  Literally a 25-50mile difference in the positioning of Joaquin's center at various stages of the model run relative to the Bahamas and to the H5 SE trough, and Ida's remnants is what is dictating the OTS soln the Euro seemingly is locked onto, and the capture of Joaquin by the trough and an EC landfall.   Take a look.

By midday tomorrow the GFS and the Euro have him centered differently. 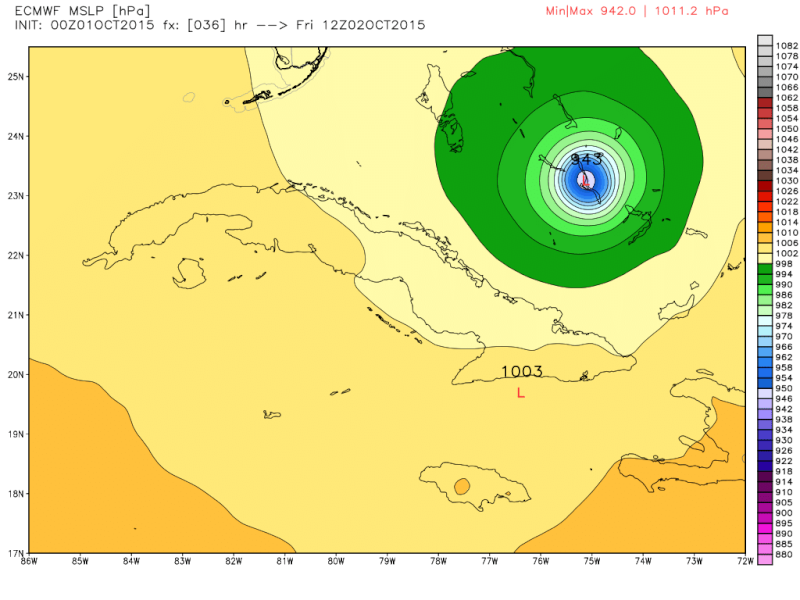 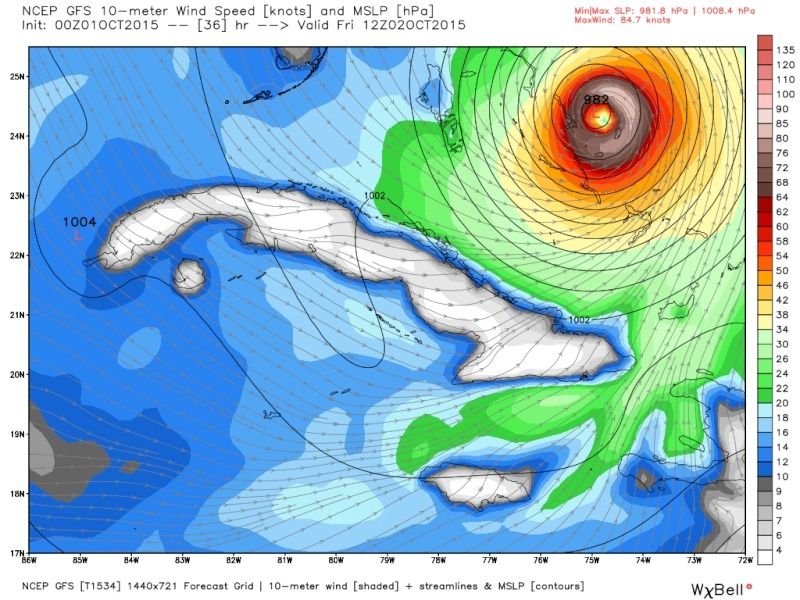 
When looking at the various steering layers one has to consider the intensity of a tropical system to know how high up in the atmosphere the steering layers will influence the direction of the tropical system.  For example.  Lets say we have a man standing 5' tall(ManA), vs a man standing 6' tall(ManB).  In order for these two men to move we have individuals pushing them from behind at different levels.  If we have 3 individuals independantly pushing both man A and Man B at 4ft and at 5ft both men will be influenced by those forces; however, if a third individual is also pushing at 6ft only the man who is 6ft tall will feel its influence because the man that is only 5ft tall is underneath the man pushing at 6ft.  My point here is that the 5' man would be like a Trop storm or Cat1cane; whereas, the 6' man is analogous to say a Cat3 Cane because its convection is taller and has a much larger diameter.   So where am I going with this?

Well after analyzing the steering layers at lower levels If you look at this map you can see the lane where we would expect to see Joaquin start to get pulled N today given the lower layer wind vectors.  But on the models, esp Euro we actually see a shift south over the next 24hrs. 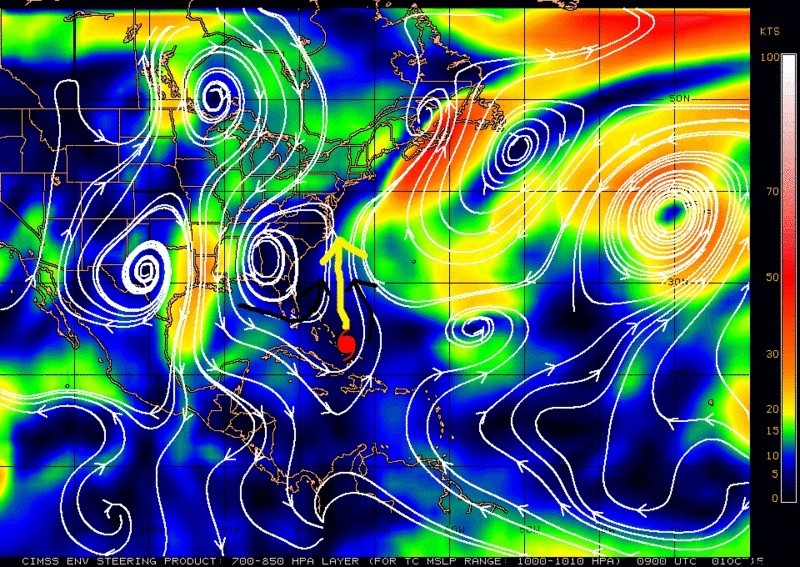 HOWEVER, because Joaquin is so strong he reaches much higher up in the atmosphere so we have to look at the steering at those levels as well.  Take a look here: 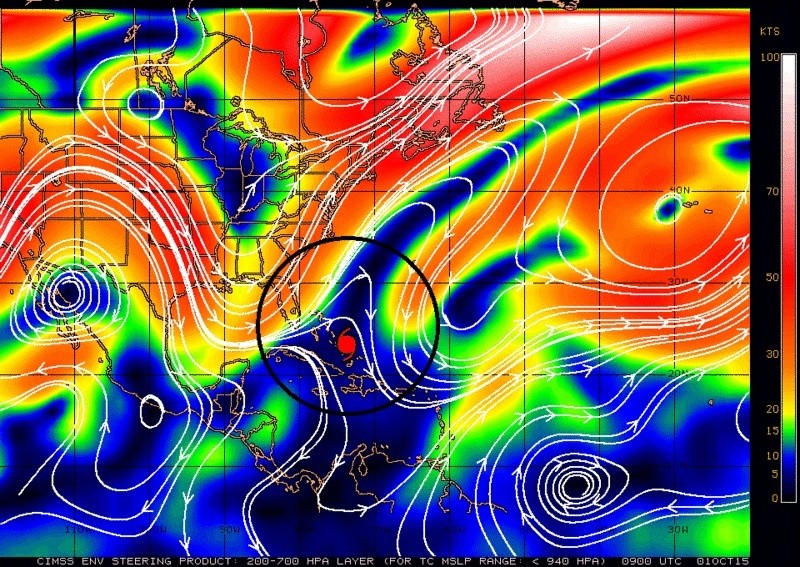 
So as you can see because Joaquin is at least 6'tall it is being influence by the wind vectors much higher into the atmosphere.  The next 24-36hrs will be key.  If you look at H5 for both GFS and Euro you will notice that they both have the placement of the H5 trough EXACTLY in the same position.  Similarly the Omega block in Central Canada, the ULL in eastern canada, and the NW Atlantic ridge are all pretty much identical on both models.  Again the position of Joaquin over the next 24hrs will be key to its interaction with the H5 cutoff Low that will be in the SE CONUS:
Edit: after reading Rb's write up above the exact timing and how far the H5 trough digs and cuts off relative to the positioning of Joaquin will play key roles.

Thank you,rb9 for the clear and understandable explanation. I love it when people "speak" slowly and use small words!

Scott, that is EXACTLY right. We cannot lean on any one model because this is all depends where Joaquin will be located tomorrow afternoon. Closer to the coast, he's probably going to be captured. Away from the coast, he will end up out to sea.

The 00z EURO Ensembles were mostly out to sea

as Frank said early on if this delays to Tuesday then what will happen is the ridge or block will move east and weaken before the next ridge builds in so there is ally for this to escape at least i think. If there was a Greenland block then there is no way in the proverbial H that it escapes and it would get slammed into the mid Atlantic.

DO NOT WRITE this off as i have been reading some posts on here. These meteorological beasts have and always will surprise in someway shape or form. Do not let your guard down on this just yet. Look at the trends yesterday - South and now they're saying east.

We have had a cone for landfall in 48 hours from NC to the Flemish Cap!