I have a week to do it. The station model plots from metar are just annoying to convert, and will take a few hours. Hand drawing isotherms aren't to bad except you have to do it in pencil then erase then plot in pen(Plus you have to take into consideration topography, aspect, ocean influence, urban influence etc.); especially this one since its from Sandy. Should have some tight gradients. Janet is right, it certainly tests your patience.
_________________
Ryan
Ph.D  Candidate at FSU
M.S. in Meteorology from FSU
B.S. in Meteorology from Plymouth State University

I am putting this here because no one will ever see it in general banter. So in regards to my rant post on that article posted in LR thread, I find it funny (sorry if I offended anyone) that this site is plastered with swear words but I guess it was deemed necessary to sensor the unpolitically correct way of saying intellectually challenged, in my post? I mean whatever but I don't get it there are far worse things said on here and I have never seen a sensor before for anything, and most are pure swears. So I expect to see nothing but straight up politically correct weather talk from here on out! LOL JK

Sroc, your request has been completed, all I have to do is proofread it. It's too long to be posted as a normal post, so I'm just going to ask Frank if he'd mind getting it up for me lol Hopefully you, and anybody else who is interested, will find it interesting haha I was actually dumbfounded by the results that I found, so hopefully that bodes well lmao

Interesting article on tsunamis one actually hit the NJ coast in the 1938 hurricane.

Some Experiences With The 1938 Hurricane

The following section relays some of the experiences that residents have given with the 1938 hurricane. These experiences are invaluable in helping to understand the nature of the storm, and to prove or disprove some of the theories as to what actually did happen.

Mr. Sewell was working for the former Lakewood Daily Times in 1938. The hurricane was his first major news story. He and his boss, Mr. Harold "Chick" Ober, were looking out the Times window, when the only large tree on the property fell directly between their two cars, missing them by inches. Suspecting now that a big storm was underway, Mr. Sewell called the Manasquan Inlet Coast Guard Station. The obviously upset crewman who answered the phone practically shouted at Mr. Sewell, "You won't believe this! I just saw a big piece of the boardwalk across the inlet swept inland by a huge wave, and a guy was standing on it!" Mr. Sewell, accompanied by his mother, an inveterate storm chaser, took off to Point Pleasant Beach for the Big Story. It took them almost an hour to drive the 9 miles, dodging tree limbs and downed wires all the way. Entering downtown, they saw huge sections of the boardwalk, railings still attached, that had been swept 1/2 mile down Arnold Avenue and were blocking the railroad tracks near the station. Along the beach, unprotected by dunes at that time, many of the bungalows between Arnold Ave. and the inlet had been damaged or had toppled off their pilings into the ocean, which was still turbulent.
Further south at Risden's Pavilion, large picture windows facing the ocean had been smashed by the wave, or waves. The bartender told Mr. Sewell that he and a patron had been looking at the surf when suddenly "out of nowhere", this huge wave higher than he had ever seen rose out of the sea and came right in the pavilion. It carried the patron out the back door, still clinging to his barstool, "all the way downtown." When he hit dry land, he was heard to say, "That drink sure had a kick", although Mr. Sewell suggests this is probably what everyone had expected him to say. After a ride like that, the patron was probably too terrified to say much of anything!
Mr. Sewell and his boss were also correspondents ("stringers") for several other papers and news services, and called as many news outlets as they could about the hurricane's effects on Ocean County. The New York Times editor took the information, but only printed some of it, since the unbelievable major disaster reports from Long Island and New England became predominant. Mr. Aber decided that the public should be better educated concerning hurricanes. He sent Mr. Sewell to Lakehurst Naval Air Station and interviewed a meteorologist, one of the few forecasters who followed the hurricane from its earliest stages. Out of this interview came a local news story that was picked up by the Associated Press and reprinted as a feature article in other papers. Interestingly, Annaliese Heinen, a daughter of an airship officer at Lakehurst, was trapped on a stalled train along the CT shoreline between Stonington, CT, and Westerly, RI, for hours during the storm. Suddenly, a huge wave knocked the cars off the tracks. Many drowned, but she survived.
Mr. Sewell was a fellow editor with Mr. Everett S. Allen on the Middlebury College student newspaper in the 1930s. After graduation, Mr. Allen joined the New Bedford Standard Times in his home town. His first major news story was also the 1938 hurricane. He eventually progressed to editor of the paper. In 1976, he published the book, "A Wind to Shake the World", on the now infamous 1938 hurricane. The book focused on the human stories of primarily Long Island and New England.
Thank you very much, Mr. Sewell, for sharing your experiences with us!
_________________
Mugs
AKA:King: Snow Weenie
Self Proclaimed
WINTER 2014-15 : 55.12" +.02 for 6 coatings (avg. 35")
WINTER 2015-16 Total - 29.8" (Avg 35")
WINTER 2016-17 : 39.5" so far

@rb924119 wrote:Sroc, your request has been completed, all I have to do is proofread it. It's too long to be posted as a normal post, so I'm just going to ask Frank if he'd mind getting it up for me lol Hopefully you, and anybody else who is interested, will find it interesting haha I was actually dumbfounded by the results that I found, so hopefully that bodes well lmao

LOL, "that drink sure had a kick!".Good thing that guy was stewed for that crazy ride.Great articles,Mugsy, on NJ storm history.

I am putting this here as per sroc but dayum, the models have been consistent on laying out about a half a foot of rain or more within the 7 day, drought buster and major flood maker for sure since it comes in two single storms. Lots of wind too but I won't hype that cuz we know how that goes over. LOL I understand the models can have errors but these extreme rain totals have been for a few days now so I am thinking its a real possibility that at least two coastals hit us maybe 3. Imagine DJF if its like this now, just no snow as we know Oct snow often rest winter stinks. 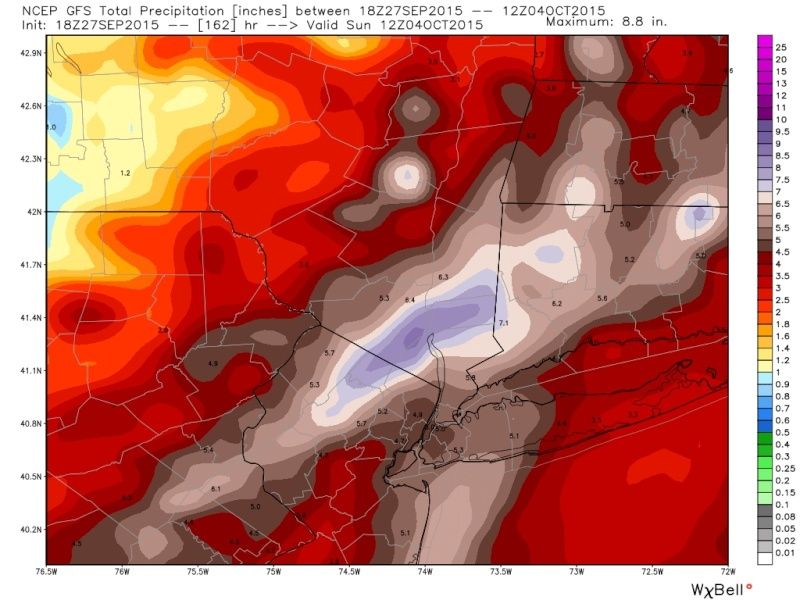 I know its a long ways off but my sister in law is getting married in Hopewell Junction On October 25th outside! Its at 1pm, is it gonna be a winter coat wedding judging from these changes?

Check out this NHC screw up

Opps, well with the Euro ensembles there is a slight chance this could be coming in the ten day, look at a few of these omg at the top one, ok ya so I lied about not posting lol. But I am not expecting that to happen. 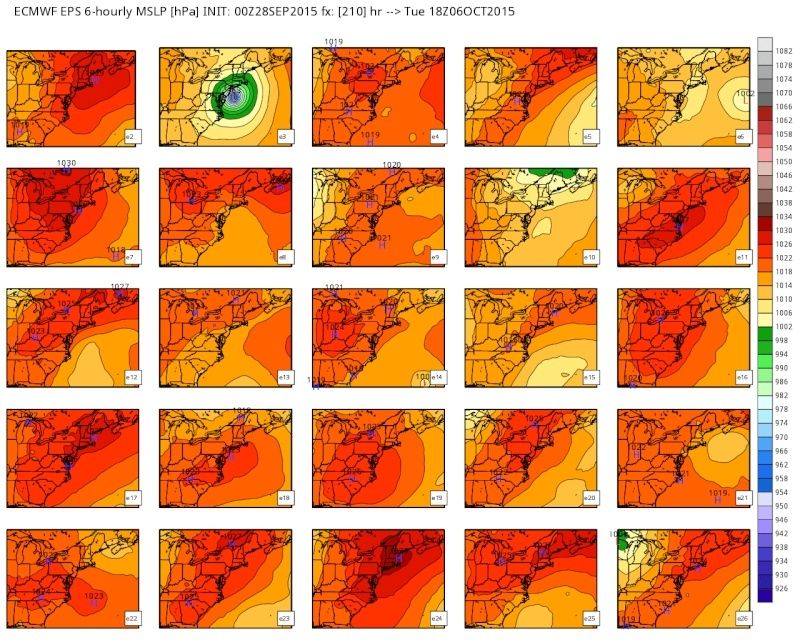 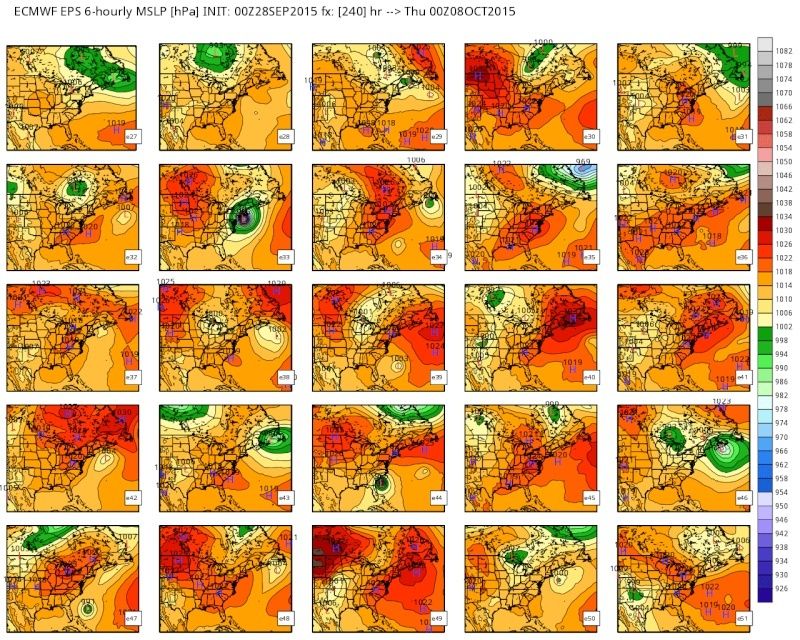 Look at the HWRF - when was teh last time this nailed a storm??

Gfdl roo further west same intensoty. Gfdl better so like I said and sorry for post in several thread. I will try delete the others wasn't sure where put it.

One thing about the HWRF forget the insane intensity its taking that westward hook and placing NYC and jersey in the corss hairs exactly like Sandy. 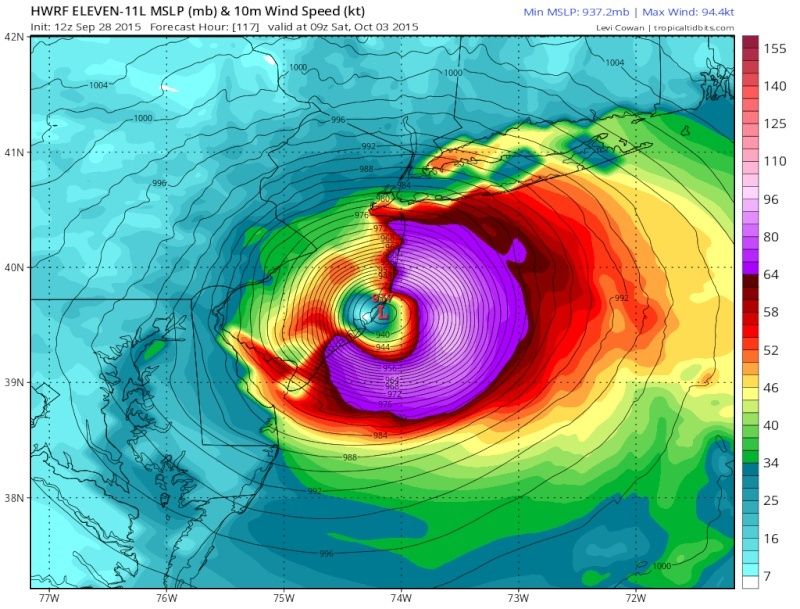 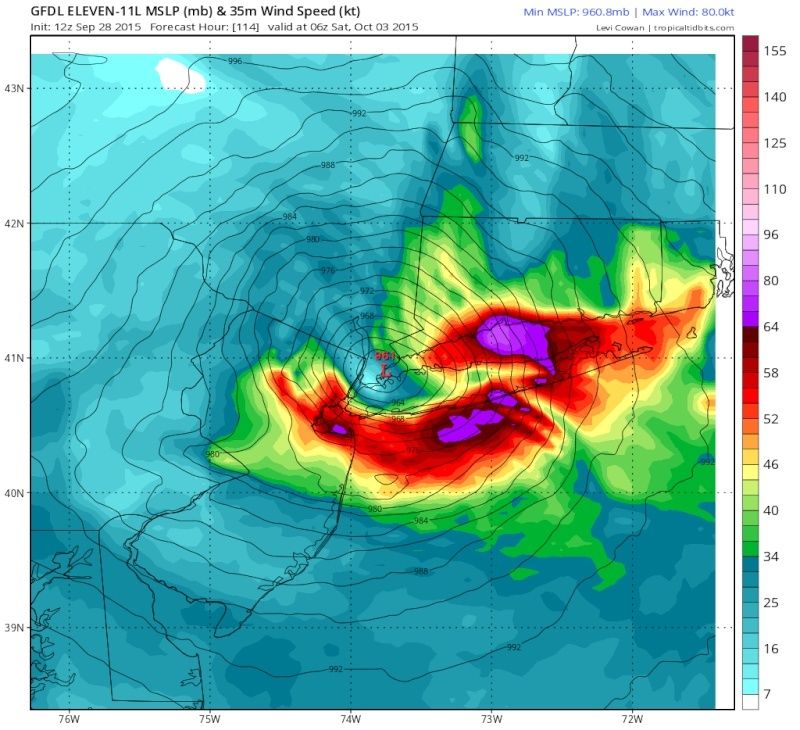 Wow.....I don't think this has much merit, if it does its within 5 days and NHC better get on the ball. Seems unlikely but my main point was the change in position.

Latest EURO run is actually looking a bit scary so far too......

Correction: It's still early in the run, but it's looking quite scary....

Is that Ida milling around the Bahamas on the Euro at hr 96??

It's something tropical....Idk which one though.