FLORENCE: East Coast Threat or Does She Sleep With the Fishes?

Actually it cleanrly looks like fo has turned more NW... cannopt confirm that though or if its just a long wobble.

jmanley32 wrote:Actually it cleanrly looks like fo has turned more NW... cannopt confirm that though or if its just a long wobble.

NW, W, NW is what I see - still on a path for the southern outer banks barring a change in direction.

I know since she really isn't going to impact us here in the NE directly the board has become relativelyquiet, but this is still an unbelievable system to track.  Current Sat imagery indicates she is on her way to strengthening further today.  Here is a discussion of the upper level set up in a nutshell using the euro 500mb maps with a quick look at the GFS as well.

You may have seen gifs of model runs or simply following the model runs yourself as they come out scratching your head at what your seeing regarding the track over the past 24hrs.  Models are in good agreement and are now are showing this crazy track where she first tracks NW towards the Carolina coast in a "Traditional" fashion.  As she approaches the coast she stalls either just before, or right on the coast; then after sitting for a bit begins to drift SW ward along the coast before eventually coming inland, then finally turns north and eventually turns NE.

Ive heard people in here and in other boards making comments about how unique this is or its unprecedented if it happens blah blah.  While the exact track, if this occurs may be unique and the devastation to the Carolina coast line would be unprecedented, a track that has a tropical system stall, do loops before eventually being picked up by the westerlies and steered OTS is anything but unique.  It has happened many times before and will happen again.

Here it is layed out.  500mb is the main steering layer so I will keep the discussion at this level only.

Here is the GFS.  Both maps below will be valid for the same time stamps of 12z this upcoming Thursday.  The first map however was the 00z run from Sept 7th.  Notice the ridge and trough configuration.  There is an upper level low, actually more like an open trough centered along the gulf coast states.  Notice there is a weakness over the NE.  The eastern flank of the trough over the Gulf states proves the system a net steering component to the N and NE.  Combine that with the weakness to the HP ridge and this system gained northern latitude and eventually recurved OTS on this particular model run.

But now take a look at the second image below.  This was from this am's 06z GFS run again valid for 12z this Thursday.  Now take notice the upper level feature configuration.  The upper level trough or low that was prev centered over the gulf states is much weaker and further SW centered over Tx/N Mexico/NW GOM and the Ridge is much more stout to the north of our system.  The net steering flow now is NW(when you combine the N steering component to Florence's east and the westerly component of the ridge to its north and northwest). 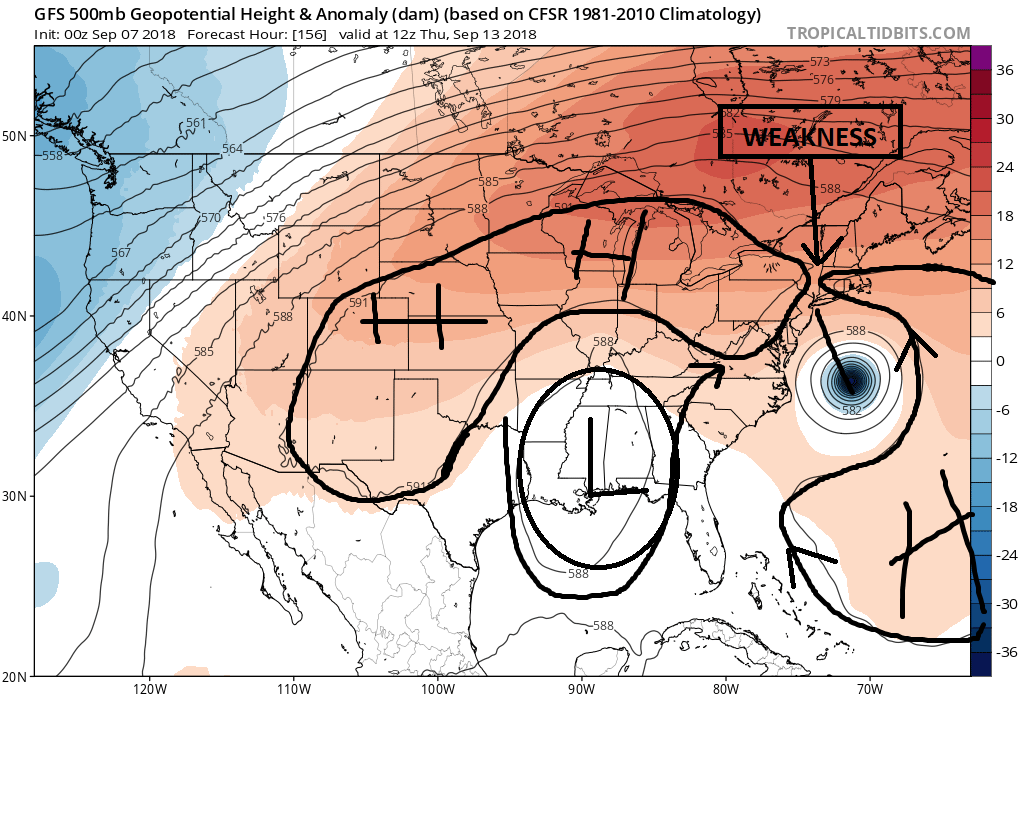 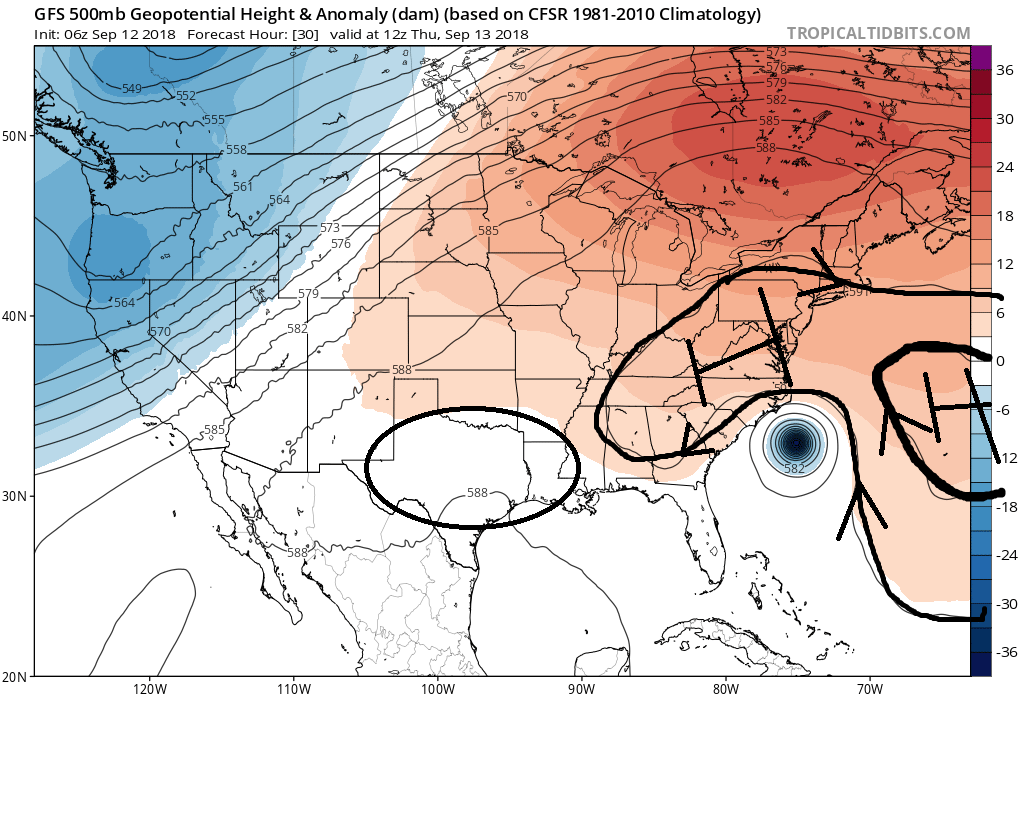 Now lets shift over the euro maps beginning with the same time frame of Thursday 12z tomorrow.  The upper level pattern has evolved in the modeling into what we see below. 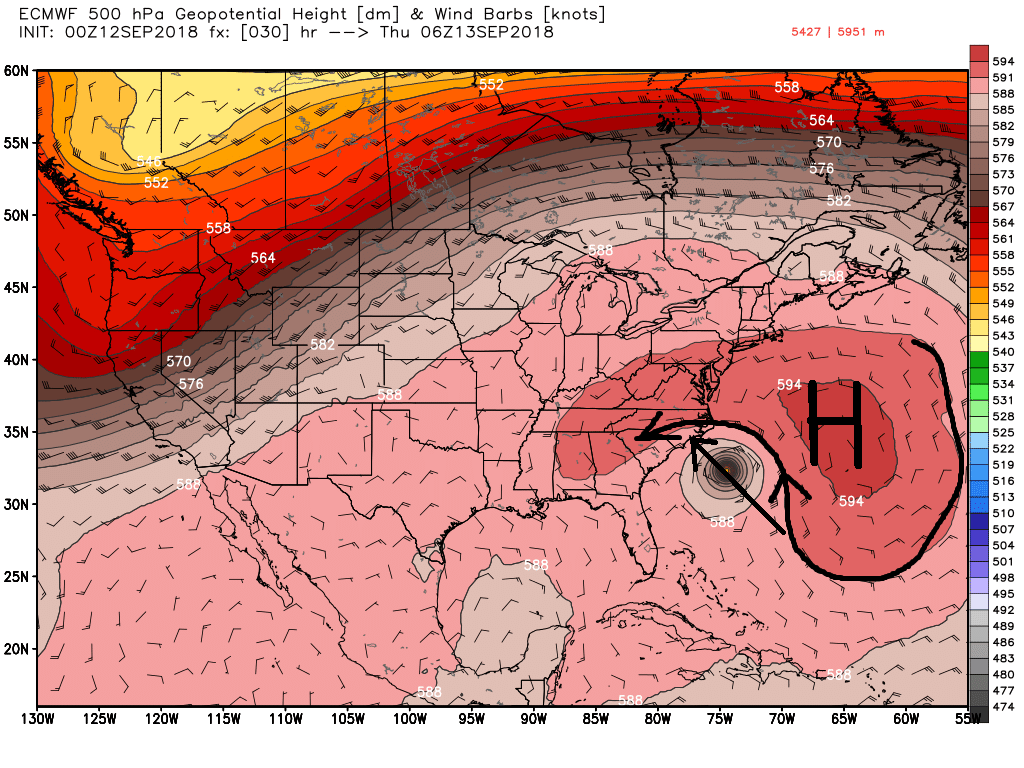 Like in Levi Cowins video I posted below as Florence approaches the coast the Atlantic ridge begins to decay while a ridge to her west begins to strengthen.  The ridge to the east wants to steer her N, while the ridge to the west wants to steer her south.  The net result is they cancel each other out and she stalls for a period.  Now the eason why the Atlantic ridging is decaying is due to a small upper level trough dropping south as seen in the upper R edge of the picture due east of cape cod or south of Nova Scotia.  And the reason the ridge to the west is building is likely due to the latent heat release from the trough In the WNW GOM(which is likely the tropical wave the NHC has marked for possible development just N of the Yucatan Peninsula. (https://www.nhc.noaa.gov/) 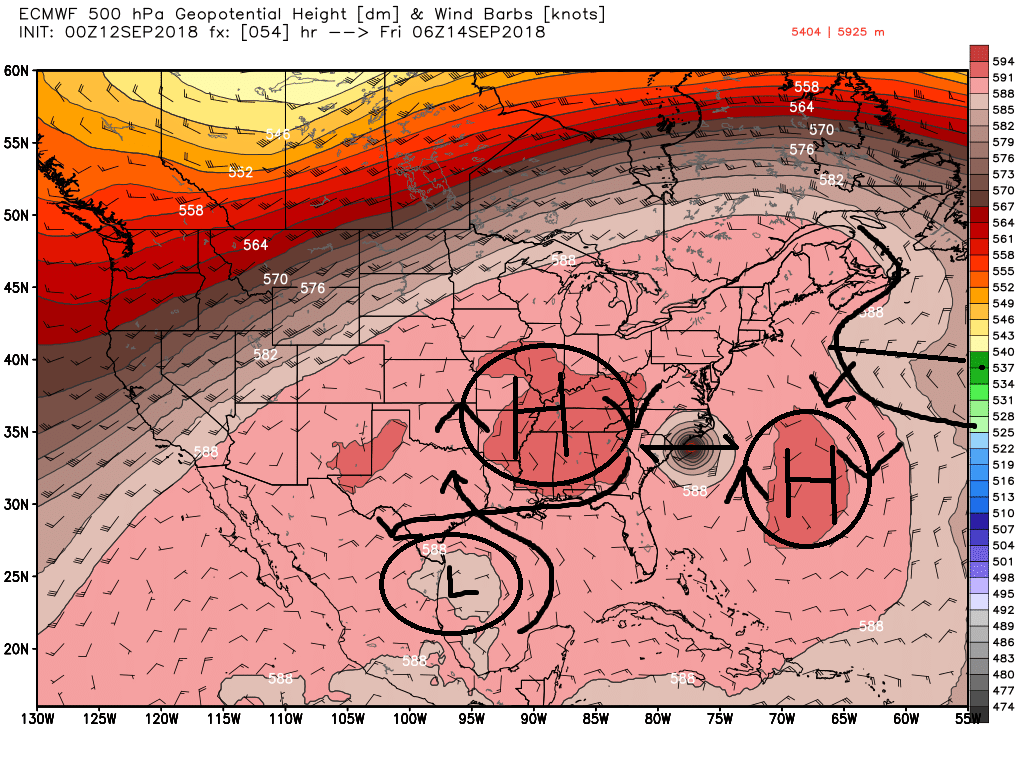 Now follow along with the next several images.  while there is a small force tugging on the system from the upper level Lo out in the Atlantic, the dominant steering mechanism is compliments of the Ridge to the west and a movement to the SW ensues until the ridge positions itself to the N.  By this time the steering flow shifts to the west and she finally moves inland for a period.  All the while a weakness is developing in the ridge over the central CONUS.  Finally when the ridge shifts into the NE and back over the Atlantic Flo really begins to feel the effects of the incoming trough and she heads towards the weakness.  Again net steering finally turns her N. until she is picked up by the westerlies of the Jet stream. 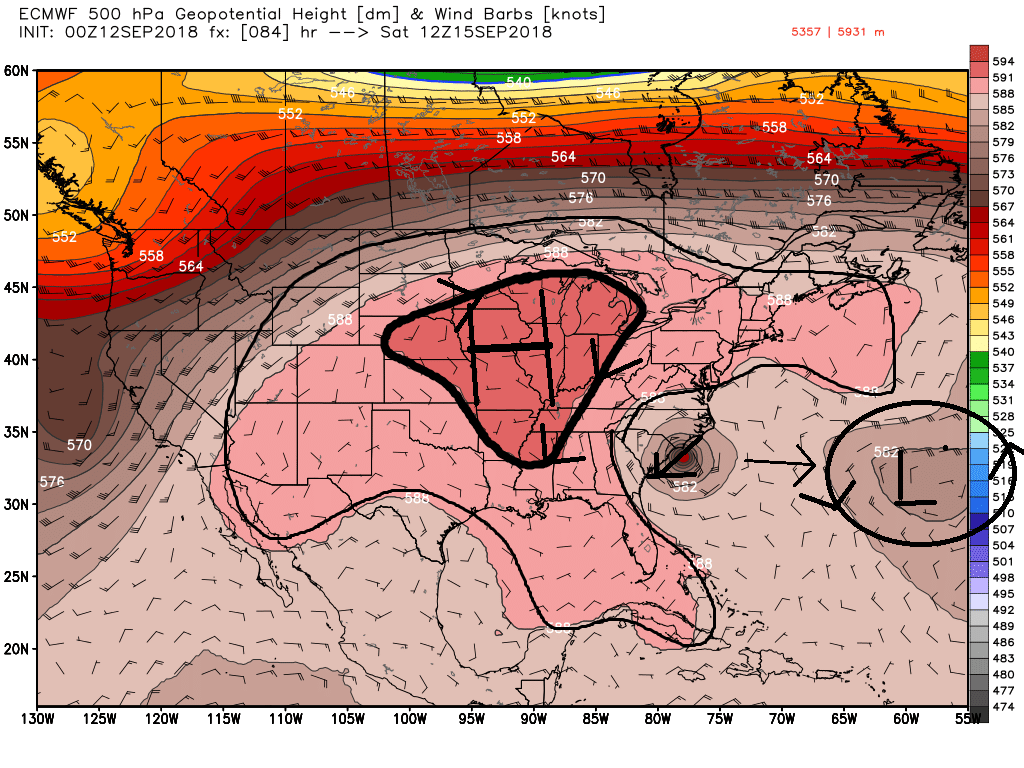 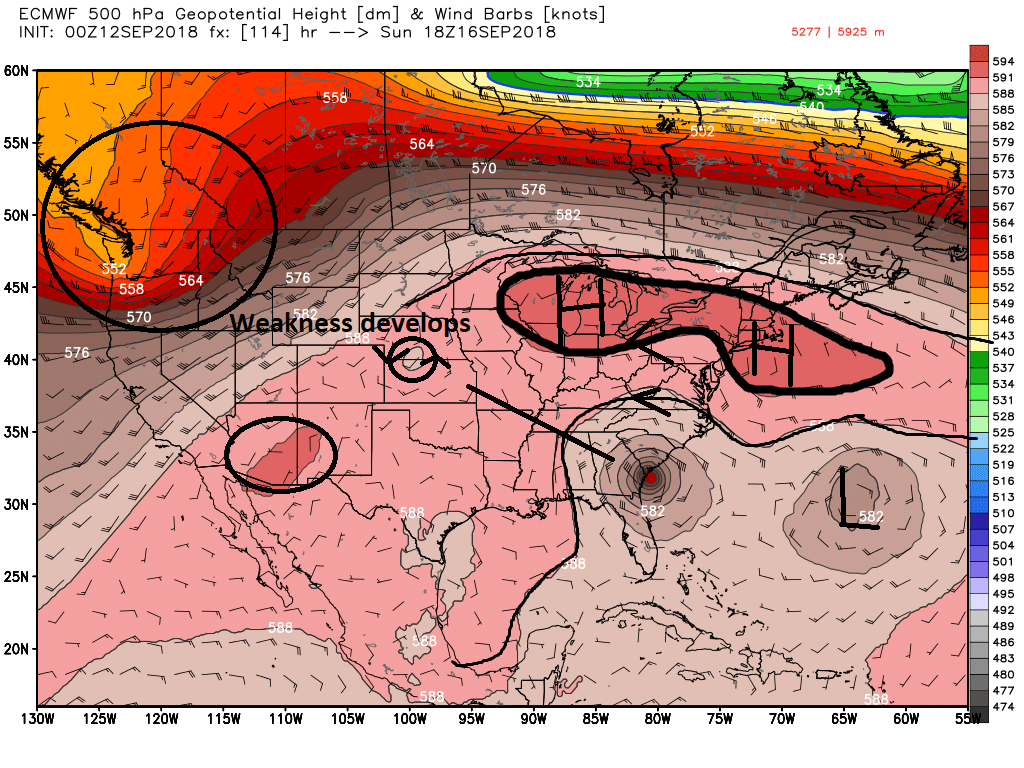 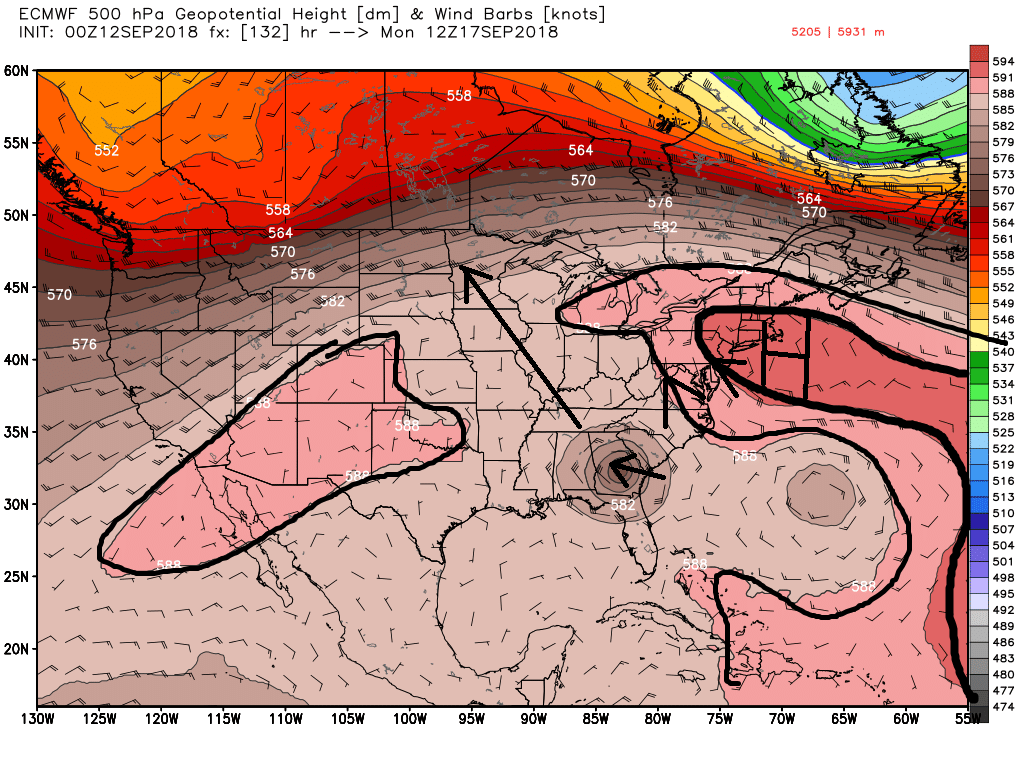 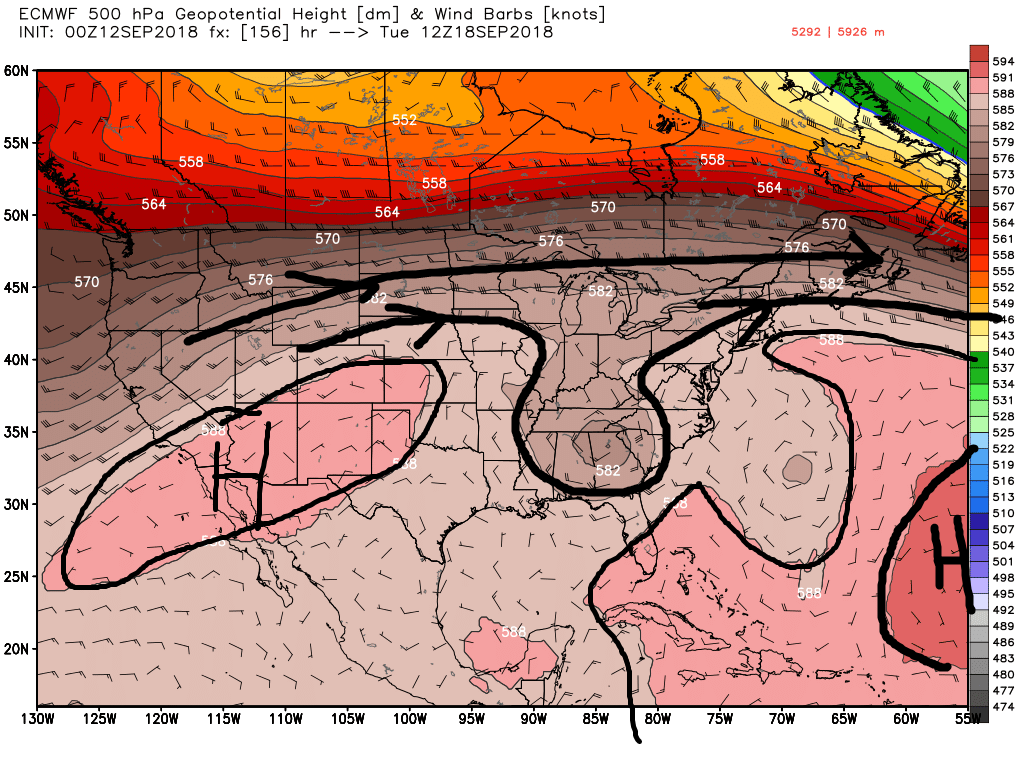