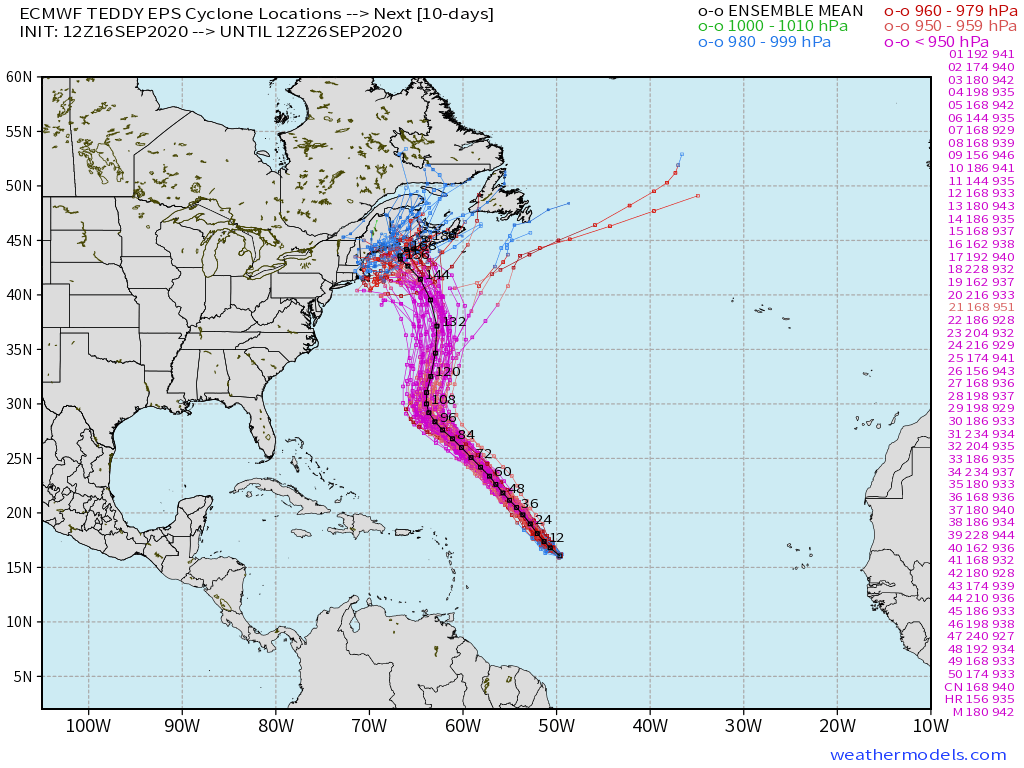 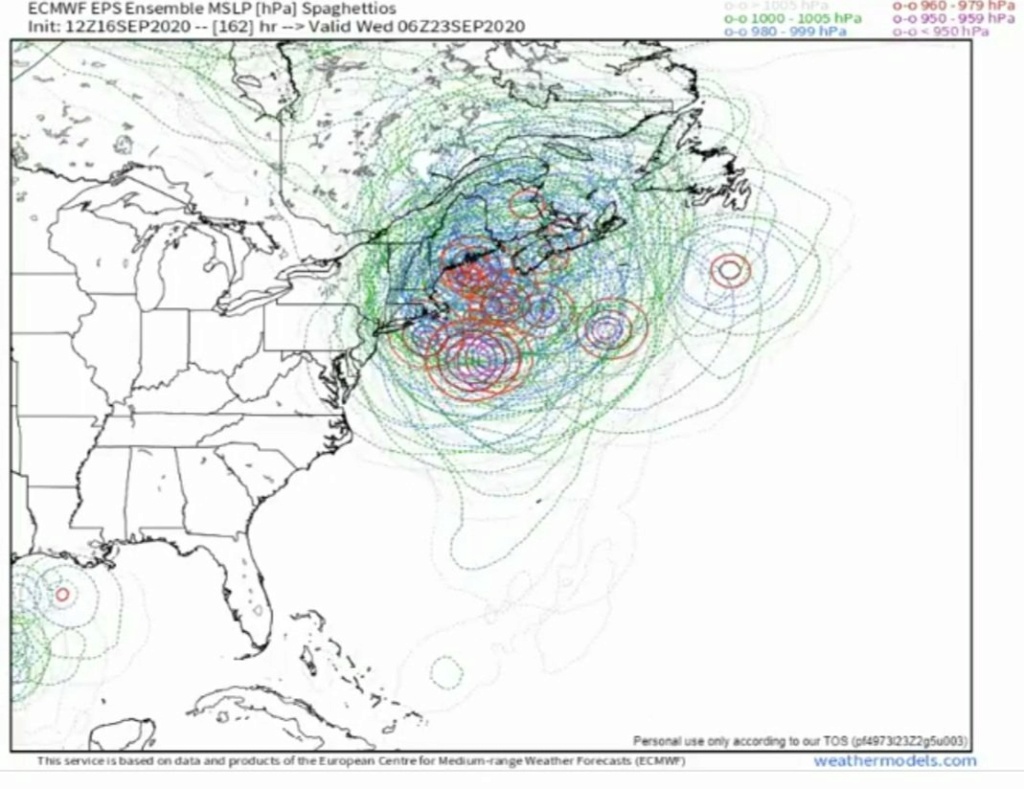 thats a sandy like track but much further north, what are the chances this happens as far south as our latitude?  The GFS is very different, didn't we say the Euro was handling the trops poorly this year?  And that the GFS was doing well? The other thing is thats some pretty damn consistant sgetti models all in line with each other, this far out im go say wow.

@sroc4 wrote:Not to get too far ahead of ourselves but here is the Operational euro for next week Tuesday time frame. If the ridge we’re a bit stronger southern NE would have to watch closely. 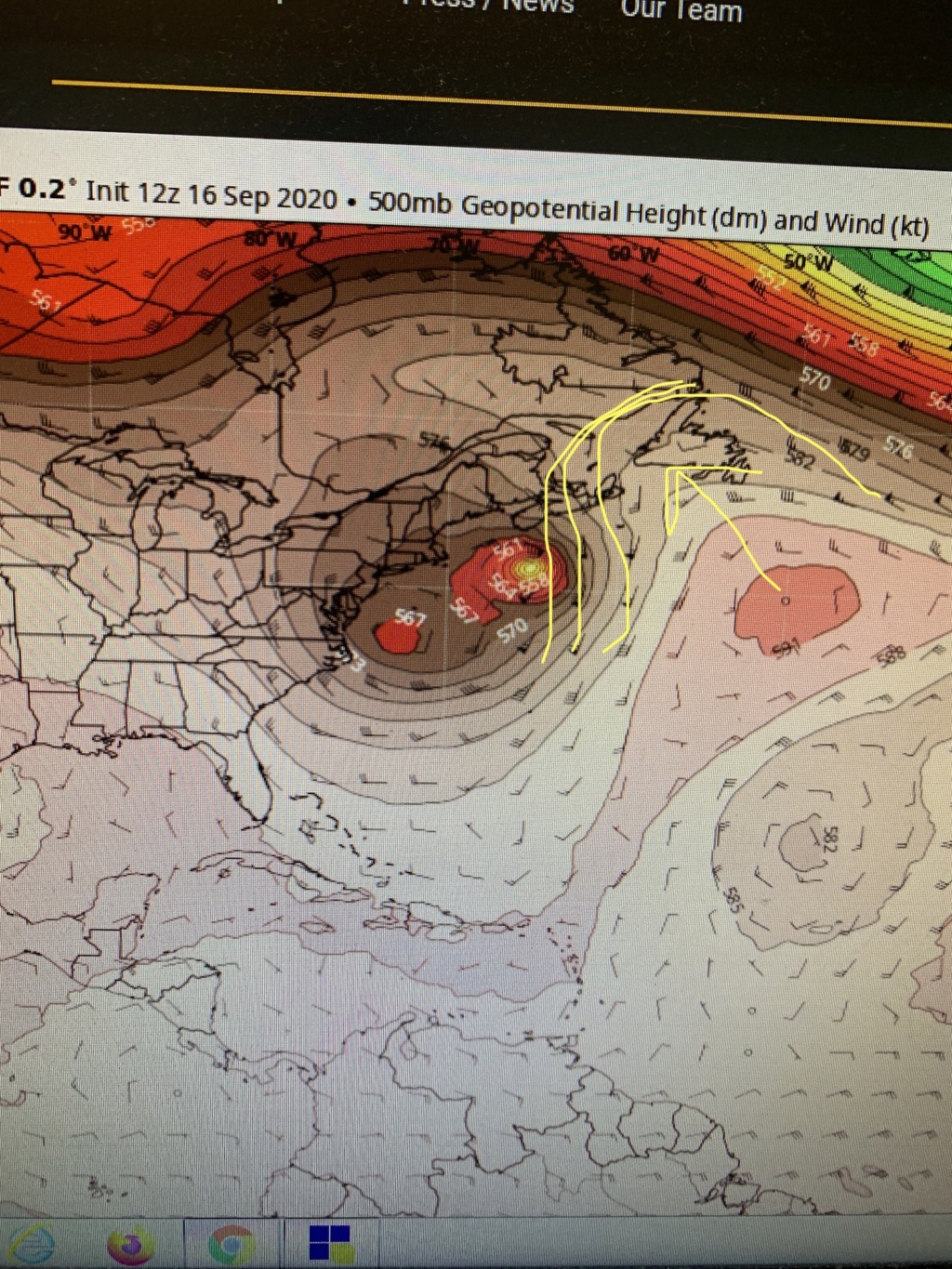 Which area is the hurricane? And where is it headed? Any chance this could be a concern for our area or is SNE the most south it would get, either way would not be good, some runs are showing a sub 950mb storm. Oh NVM I see him, wow thats a close call.

Only in 2020 would a hurricane from Bermuda take a NW to NNW track into NE or the canadian maratimes, thats a extremely unheard of track.

lol VERY precise percentage you got there, yeah I think it stays off any oand other than bermuda. Poor Loisiana they are looking at another hurricane same spot just after power has started to return. If GFS is correct.

Teddy will only give us big waves thats it

good looking out mugs. btw several people are now asking me what's the outlook for winter? in a polite voice I only tell them I'm still on the tropic's but keeping a"side eye" on the carribean.

06z GFS has a strong hurricane into the bend of florida then rides the coast very similar to Isiais and places NY east in the wind but the rain is nor so displaced to the west, way far out and def not showing up each run, over 300 hrs away, lets see in 10 days. 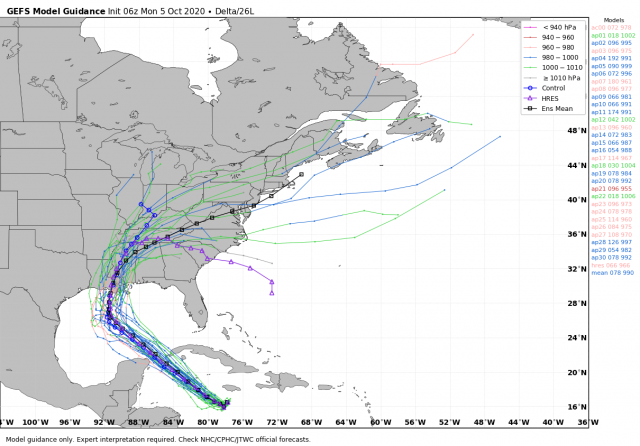 I heard Delta could possibly be a Cat.2 when it makes landfall in the northern gulf. Seems like every hurricane this season has come ashore in the same general area. Those poor folks have to be battle scarred by now.

WOW, they cannot catch a break! Looks like we could see some remnant impacts,

WOW, they cannot catch a break! Looks like we could see some remnant impacts,

They are a magnet for Hcanes - Laura now Delta yikes! 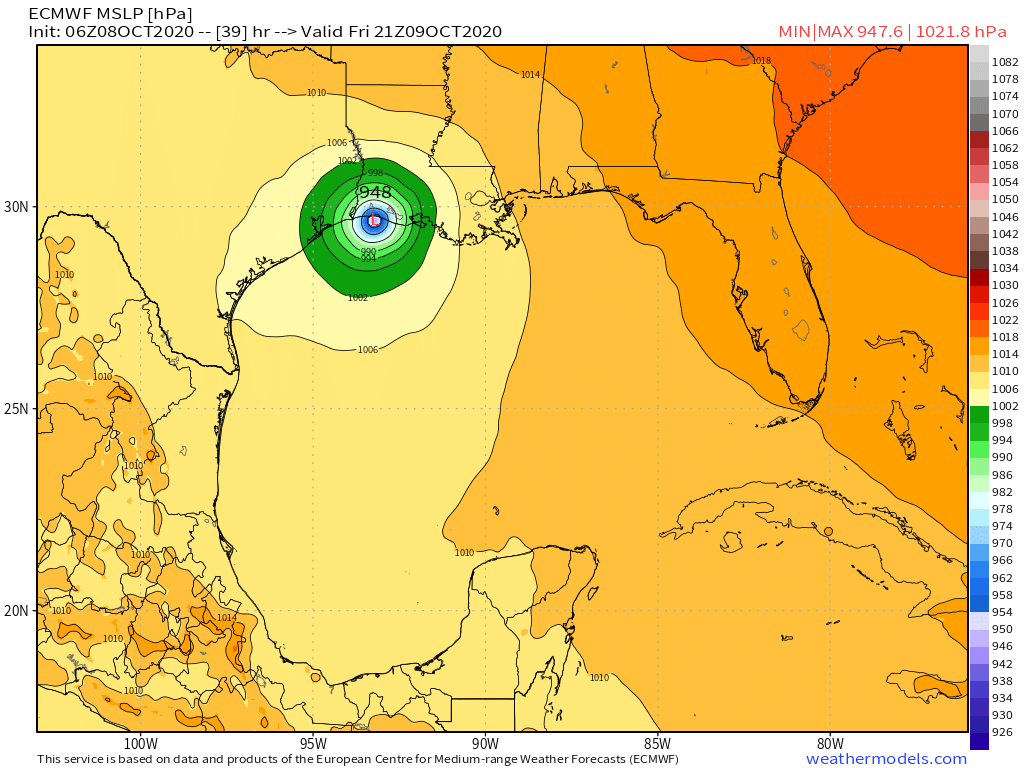 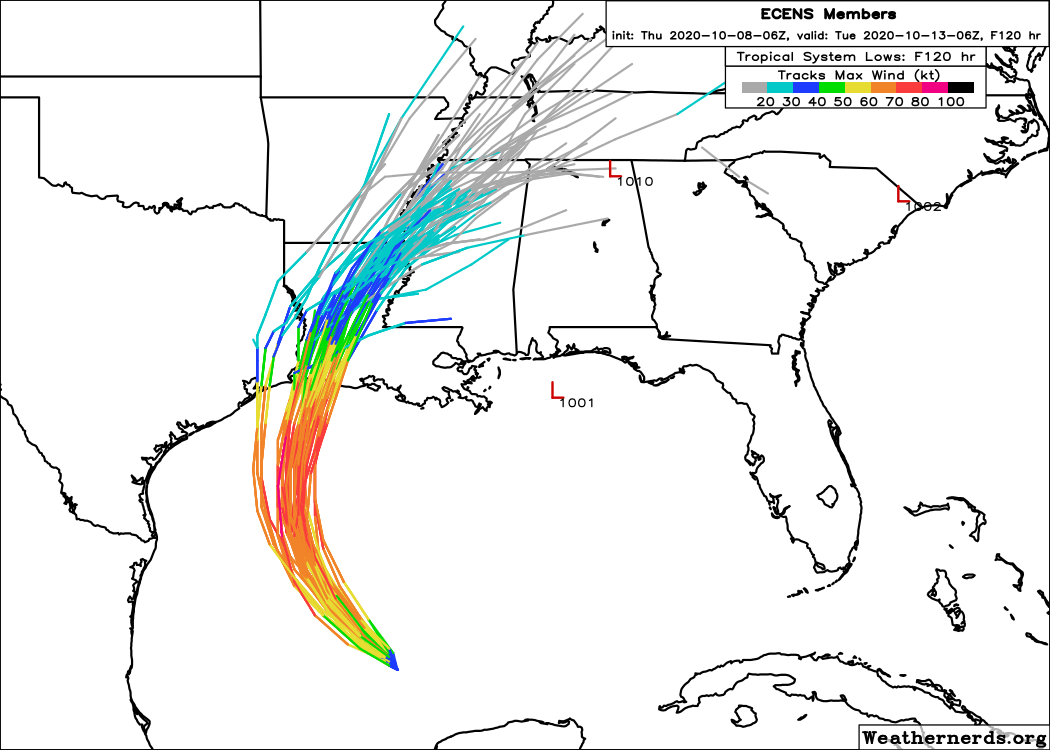 The Euro has nearly 4-6 inches rain up here coming from leftovers of Delta yikes.

Look what fell in rain down there. 18 inches in 12 hours.

UMM 06z GFS FL and Tristate/New England, fantasy land but def falls in the time frame talked about. Thats one massive hybrid that heads up here. FL gets slammed.

ACE -Complimets of WxBell and  JD 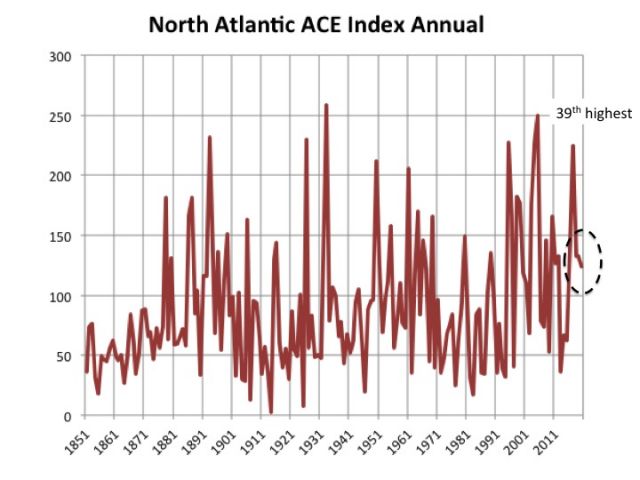 Not parallel to the Number of Named storms - weak sauce overall - again some would have never cut it as trop storms being named if 20-25 years ago maybe 15. Definitely not anytime before this timeframe IMO. 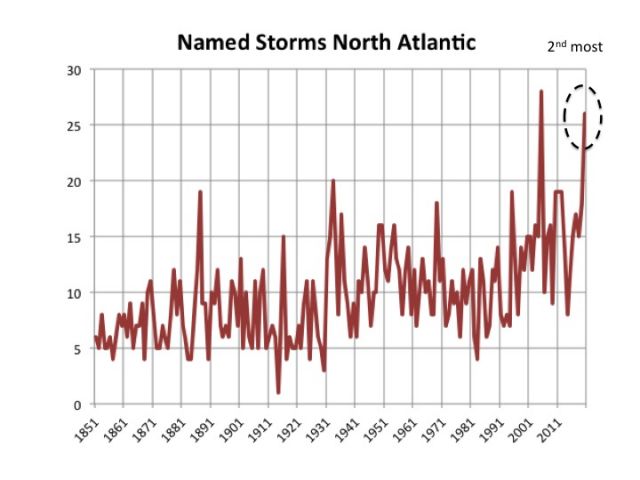 12 tropical systems have made landfall on the Continental US 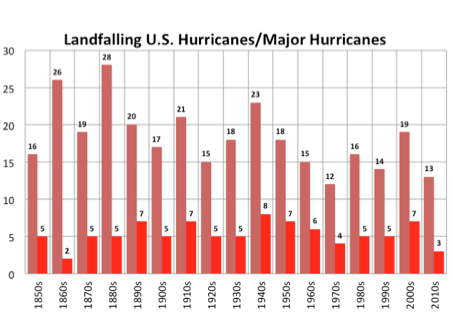 8 Hcanes- 3 of which were major

It is unbelivable that we are about to have Zeta, and that louisiana may well see its THIRD strike from a hurricane in a 2 month period, I am pretty sure this has never happened anywhere on the US coast in a entire season let alone in a 2 month period. Just nuts, and long rage GFS isn't quitting well into Nov...

@jmanley32 wrote:It is unbelivable that we are about to have Zeta, and that louisiana may well see its THIRD strike from a hurricane in a 2 month period, I am pretty sure this has never happened anywhere on the US coast in a entire season let alone in a 2 month period.  Just nuts, and long rage GFS isn't quitting well into Nov...

Good morning Jon and everyone.  Definitely not unprecedented.  Not by a long shot.  The first year that came to my mind right away was 2004 because my sister and my brother from another mother were directly affected by 3 of them down in Fla.

As you can see it started with August 12th Bonnie came ashore as a Trop storm.  One day later on August 13th Charlie landfalled as a Cat 4 just north of my buddy in Ft Meyers Beach.  He lives right on the one of the canals.  He said that after the winds started to calm down he and his neighbors were using their jet skis to go through his neighborhood to check on everyone.

Fast forward less than a month to Sept 5th where Frances Made landfall as a Cat 2 just north of where my sister lived.(West Palm Beach).  Hurricane Ivan made landfall as a Cat 3 on Sept 16th near the wester Fla pan handle/E Alabama boarder after ravaging the island of Grenada on Sept7th as it passed only a few miles south of the tiny island where I had friends living at the time.  The stories they have are crazy; esp in the aftermath as most structural buildings were compromised and the looting was incredible.  Next was Jeanne on Sept 26th as a Cat 3 again making landfall in the exact same spot just north of my sister who lived in west palm beach as Frances back on the 5th. 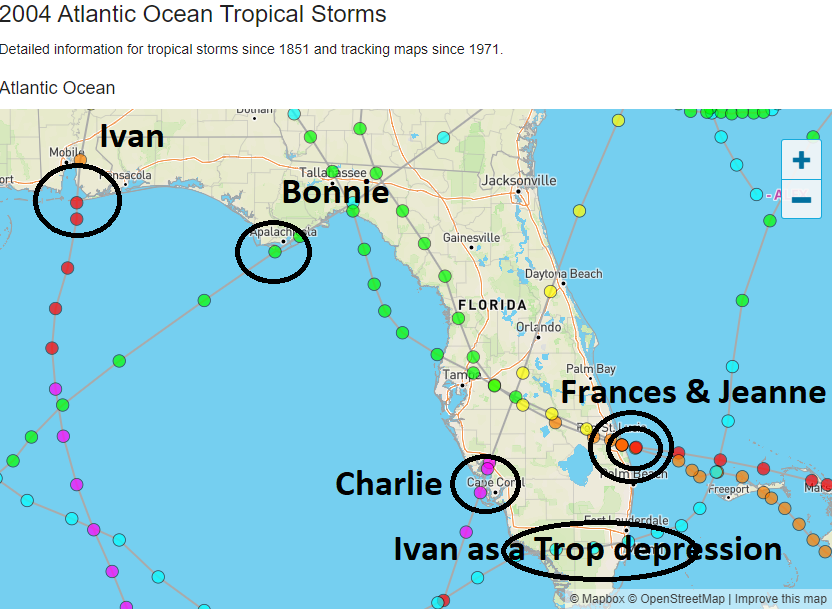 Now you may be saying what is that on the southern tip of Fla "Ivan as a trop depression" in the map above.  Well Ivan was one crazy system.  If Ivan the hurricane was put into human form this is what he might look like: If you actually look at the entire life of Ivan's energy after making a landfall as a Cat 3 as stated above you can see in the below map it weakened over land into a Trop depression(blue circles) as it climbed latitude, exited the EC near the Delmarva before then regaining Trop storm status(green circles) and going on a crazy drive against traffic on the gulf stream freeway, before once again weakening back down to Trop depression status(blue circles) right as it passes over the southern tip of Fla near Miami and re-enters the GOM.  Once back into the GOM it regains its Trop storm status(green circles) and headed for yet another landfall near the western LA boarder.  It weakened back to a Trop depression right before landfall however. 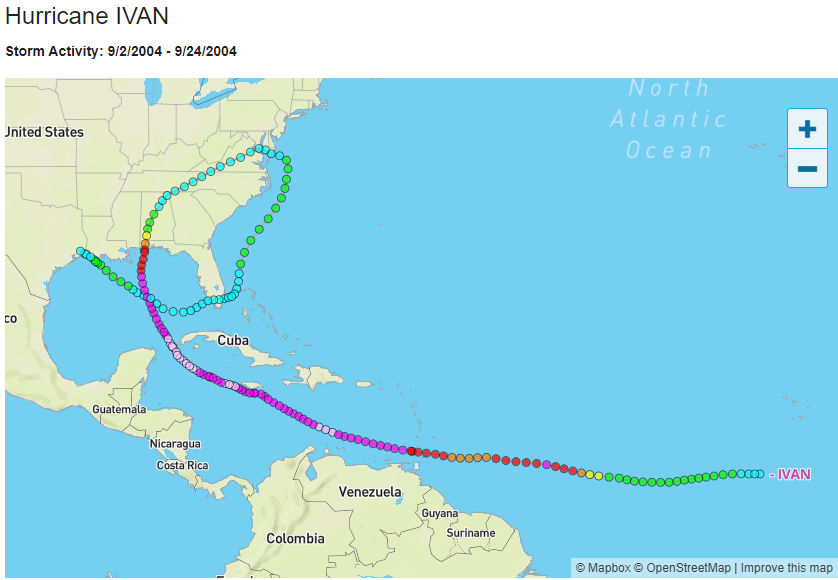 The very next year in the 2005 Hurricane season 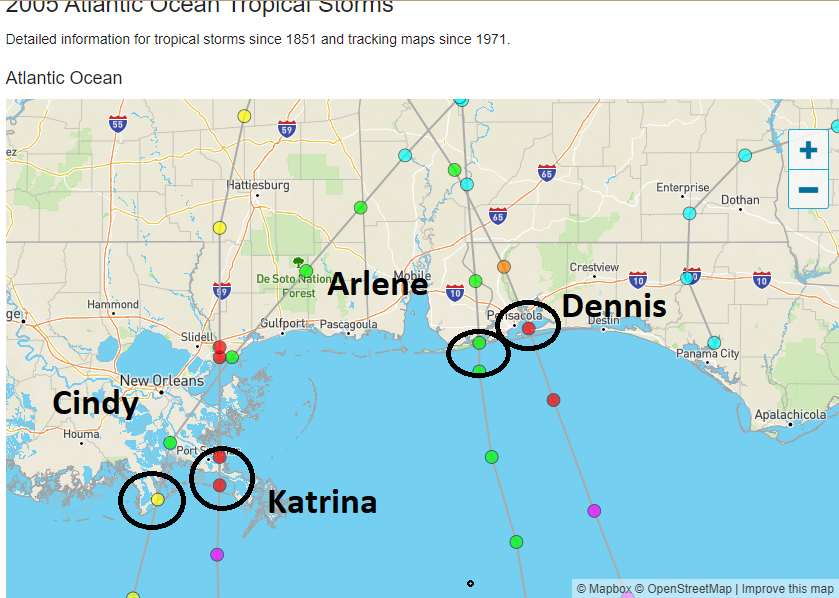 Wel I stand corrected, and yes loving the tropics season I recall Ivan being crazy but I forgot the actual trip he took. Crazy for sure. And yes scott I am aware of the color coding lol. GFS now showing a cat 2 with Zeta. Poor them either way, they have had no power more than they have had power, looks so far might hit east of the area the last two did but still.