Light flurries by me

My school district said business as usual since we are all remote. Other districts around me were smart and did a compromise: virtual school for the morning and then cancelled the afternoon session. That was smart! I agree - Let kids be kids!

.SYNOPSIS...
A major winter storm will begin to impact the Tri-State Region
tonight. The storm will continue into Monday night, with
lingering effects lasting into Tuesday night.

.NEAR TERM /UNTIL 6 AM MONDAY MORNING/...
Primary low pressure weakens as it shifts east through the Ohio
Valley. Meanwhile, a secondary low takes shape near the Mid-
Atlantic Coast. High pressure, centered just east of Hudson Bay,
weakens over the local area, and isentropic lift shifts in from
SW to NE. Snow becomes likely across the area with this
increasing lift and moisture. Expecting that snow will be
falling across most of the forecast area by daybreak. Some
indications that mesoscale banding sets up and weakens late
tonight as it approaches the southernmost zones as low-mid level
frontogenesis shifts north. Snow accumulations of 3-6 inches is
anticipated tonight across a pretty good portion of the
forecast area with higher amounts possible in NYC and NE NJ.
Temperatures generally in the 20s, and turning breezy for
coastal areas.

.SHORT TERM /6 AM MONDAY MORNING THROUGH TUESDAY NIGHT/...
Low pressure off the Mid-Atlantic coast slowly drifts NE through
the day. The forward motion of the storm will be slow Monday
through Tuesday as a closed H5 low off to its west tries to
catch up. The location of the storm center becomes convoluted,
but model consensus has the storm tracking near the 40N/70W
benchmark Tuesday afternoon into evening.

Snow spreads across the rest of the forecast area as thermal
profiles support snow through at least noontime/early afternoon
Monday for most of the forecast area. Lift/upward forcing
becomes stronger roughly mid-morning into the the afternoon with
an approaching low level jet and increasing 850-750mb
frontogenesis, with models signaling a band of strong
frontogenesis slowly pushing north through the forecast area
during this time. This presents the potential of mesoscale snow
banding for a good portion of the forecast area. Moderate to
strong omega either within or not too far beneath the dendritic
snow growth zone during this time could spell 2-4 inch per hour
snowfall rates within this band(s). For coastal areas, winds
20-40 mph with gusts 40-60 mph will help create near-blizzard to
blizzard conditions from roughly mid-morning into the
afternoon, possibly even into the evening. Working against this
however is that an elevated warm nose then likely pushes into
much of Long Island and SE CT, possibly even into the city as
well. This then introduces mixed precipitation for these
locations, with even a complete changeover to rain across the
Twin Forks and potentially even coastal SE CT with the help of
boundary layer temperatures and the warming aloft. Do not have
enough confidence of 3 hours of blizzard conditions to go with a
blizzard warning - whether it be due to uncertainty of PCPN
type or winds being consistently strong enough while it`s
snowing. There is still a potential that some areas get
converted to a blizzard warning if confidence increases. The
strongest frontogenesis is likely to the north of these areas in
the evening, so dynamic cooling won`t be much of a factor for
much of the forecast area at this point.

Thermal profiles probably don`t change all that much late night
Monday through Tuesday morning, so periods of snow inland/mixed
precipitation LI/SE CT continue. Some models even suggest
frontogenesis ramping up INVOF the Hudson Valley during the day
Tuesday. Thermal profiles Tuesday afternoon cool off with
precipitation chances dropping off somewhat, but still likely,
or at least with snow becoming less steady. A mix changes back
to snow for eastern sections of the forecast area during this
time. Most of the snow accumulation will occur Monday afternoon
and night, with light accumulations during Tuesday. Only change
to headlines was to include eastern Suffolk County in the Winter
Storm Warning. A good portion of the area probably sees at
least 6 inches of snow before mixed precipitation pushes in.
Forecast snow amounts might even be a little too low with snow
amounts in the Twin Forks area. Followed fairly closely to WPC
guidance for QPF which seemed reasonable and adjusted snow
amounts upward a little where mesoscale banding can occur and/or
temperatures are cold enough to support more than a 10:1 ratio.

If there was a K -uchera model for "Likes" it would show 35 likes for you.

And mugs, be careful, you know how Frank feels about the K-word models. 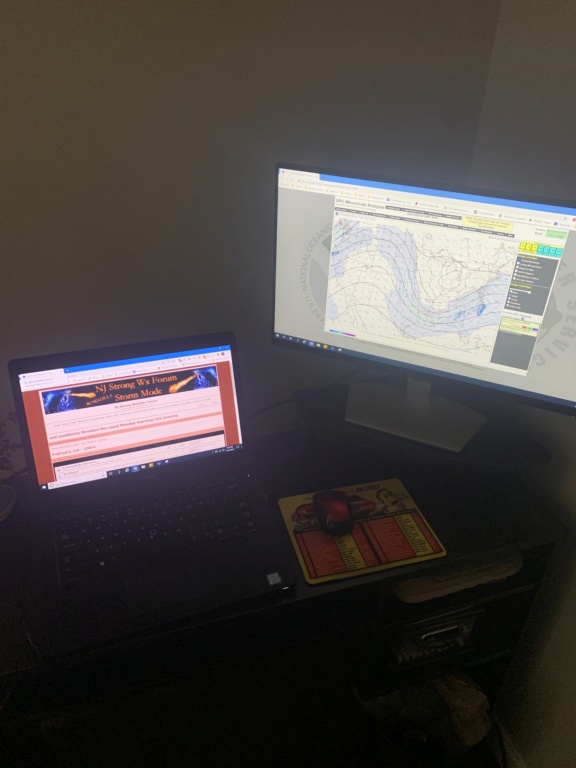 The radar right now is just impressive. Usually the precipitation in front of these Miller B's is ragged until the coastal pops. But this has ample moisture out front.

I go in and out of decent bands. Moderate snow 21/19 with just under 3" OTG. Wind definitely picks up in the decent bands.

Appreciate all you do Frank.

heehaw453 wrote:I go in and out of decent bands.  Moderate snow 21/19 with just under 3" OTG.  Wind definitely picks up in the decent bands.

I think I'm "downstream" (upstream?) from you in the meteorological sense. What you get tends to come through here about an hour later. I'm getting those same bands. Haven't measured but eyeballing it I'd say I have about 1-2" out there.

I know this is ridiculous but is it concerning that the snow still hasn't hit the ground yet here in westchester?

After looking at all the latest data ...the short-range models and the radar there are some changes to be made in the forecast because there has been a decisive and significant change here at the last minute with the formation of the coastal oh.

First lets look at some regional Radars and see what is going on. This recent radar image from 12:30 PM Sunday shows the dry slot which has pushed all the way through the Shenandoah Valley and into the Washington DC Metro area with significant brakes in the snow Shield. However there is still moderate and significant snow in the Northern Neck … Fredericksburg … into southern Maryland as well as the Eastern panhandle of West Virginia … central and northern Maryland and Baltimore. SEE IMAGE 1

IMABE #2 is the radar forecast for 313PM and 5PM this afternoon. As you can see the dry slot has pushed its way up into Washington DC but has halted across the DC suburbs in Northern Virginia. It has also pushed up into Winchester and close to Hagerstown. In Central Virginia; The precipitation is mostly rain and its heavy rain in southeast Virginia eastern North Carolina and the southern Delmarva.

By 9 p.m. this snow has pushed into the North and there are just areas of sleet and light snow mixed mostly north of DC in central and Northeast Maryland. Notice that nothing is occurring south of DC or in the Shenandoah Valley or the Eastern panhandle of West Virginia IMAGE #3 And at 3 a.m. not much is going on in northern Virginia Maryland eastern portions of West Virginia and the Delmarva either. It looks pretty quiet.

The initial forecast from back on Thursday and Friday had the formation of the coastal LOW close to the Delmarva or just offshore for much of Monday. Having the coastal LOW in that position would allow for the circulation of the large coastal LOW to pull the snow down from Pennsylvania New York and New Jersey into Maryland and Northern Virginia and the Eastern panhandle of West Virginia… and probably back into the Washington DC Metro area… the northern Shenandoah Valley and perhaps central and northeast Virginia. Moreover because the coastal LOW was going to stall close to the Delmarva Peninsula it would cause easterly winds to bring milder air into southeast Massachusetts Boston Rhode Island eastern Connecticut eastern Long Island changing the snow to rain and reducing the snow amounts in those areas that significantly

However as you can see the new data clearly does NOT do that. Instead the coastal LOW is much further to the north and east. This means that the Boston and Southeastern New England area see their winds stay North or Northeast so temperatures there are cold enough to support snow and all of eastern New England gets pounded with anywhere from 12 to 18 inches of snow.

But in the Maryland DC Baltimore Northern Virginia region ...the shift of this Coastal LOW for the to the north means that any wrap around snow on Monday is going to be significantly less than earlier forecasted. in addition... the area of moderate and heavy rain in the Ohio Valley which earlier forecasted to move into Northern Virginia Baltimore central Maryland for Sunday night into Monday … is going to stay further to the north because the actual costal LOW pressure area is tracking further to the north.

We can see the shift here on the models for tomorrow. At 7 a.m. IMAGE #4
on Monday the coastal LOW is significantly further east than what the data was showing either yesterday or on Friday. There is a huge dry slot across all of Virginia Maryland and even into Southeast Pennsylvania. Only yesterday the models for producing huge snow falls in Philadelphia and Southeastern interior PA. But now it looks like even that area will see much less snow.

During the day on Monday at 1 p.m. and 5 p.m. the coastal LOW is significantly further to the north when compared to what It was showing yesterday or on Friday or on Thursday. This keeps all the heavy precipitation north of Philadelphia into northeast Pennsylvania…. New York City / North Ne Jersey and New England. But it also means that any wrap around snow showers on Monday in northern Virginia the northern Shenandoah Valley in the Eastern panhandle of West Virginia will be minor if any.
IMAGE #5

And clearly this shift means that the snow forecast map in the LAST CALL as well as the FIRST CALL forecast maps for Northern Virginia and Central Maryland and even into Southeastern Pennsylvania are probably going to bust.

WHAT THREW ME OFF (and many other mets as well )-- was that fact that last week the coastal Low was forecast to be off Norfolk on Monday NOT south of eastern Long Island NY .

lglickman1 wrote:I know this is ridiculous but is it concerning that the snow still hasn't hit the ground yet here in westchester?

Anyone live under the small blue dot?

Do you mean the green dot in Rockland?

Primary low in the stages of transferring to secondary. You can kind of see it looks like a face, and the 'right eyeball' is our secondary low. 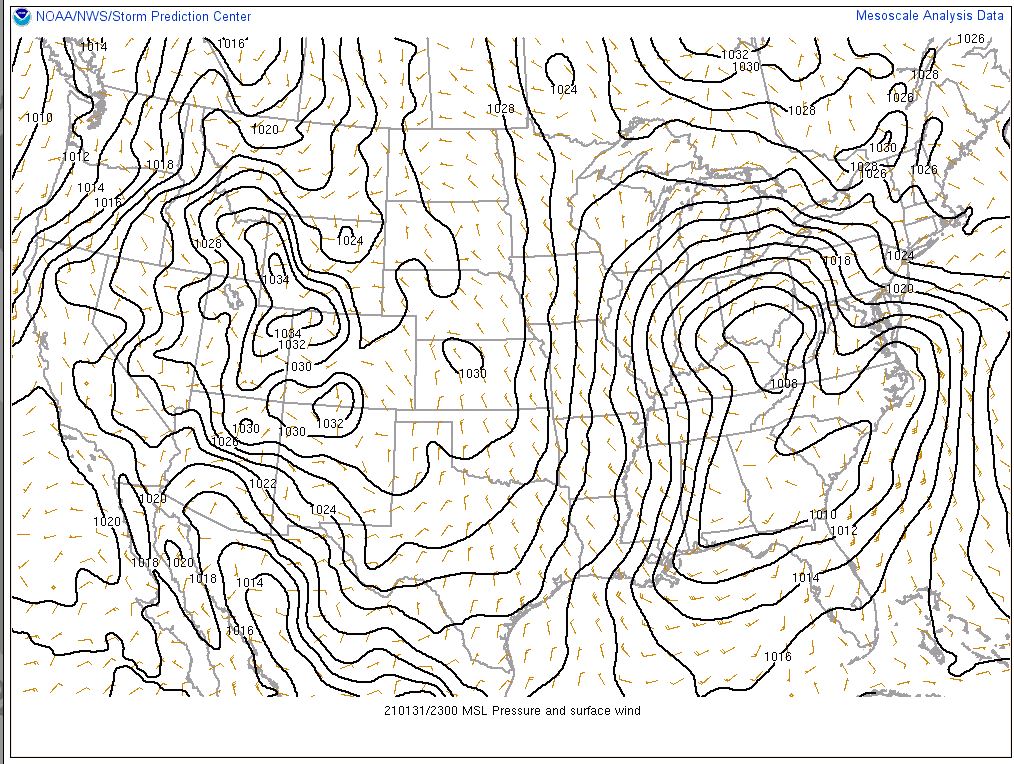 2-hour pressure change. Expect this to look dramatically different in a few hours, but again it's nice to see the secondary try to pop right over Hatteras. 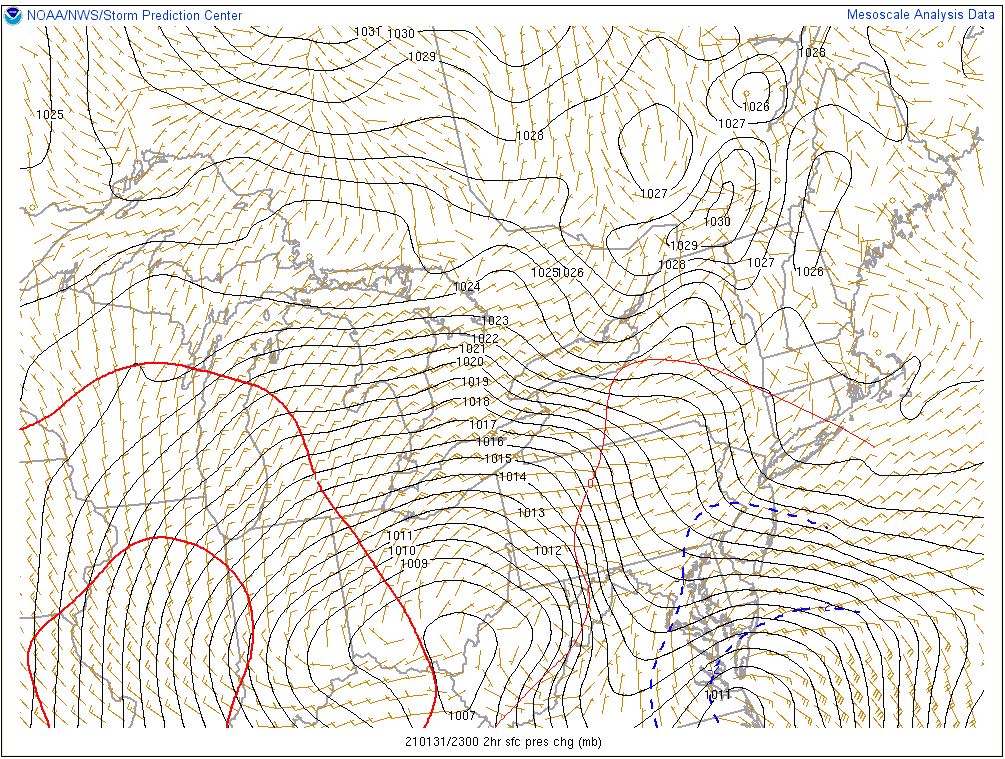 AMD95 wrote:Do you mean the green dot in Rockland? 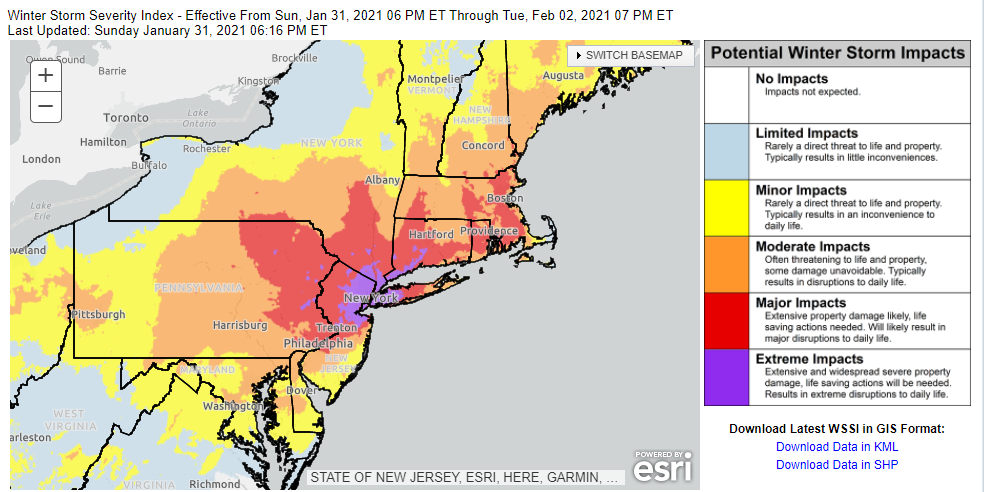 From another site. Wonder if this is still valid.

Friendly reminder: the snow breaking out today across portions of the Mid-Atlantic & Northeast - this is merely isentropic ascent (moisture) + warm air advection "clashing" into the dense, cold airmass. This isn't even the "main" event...

I’m ready. Set up is up and running 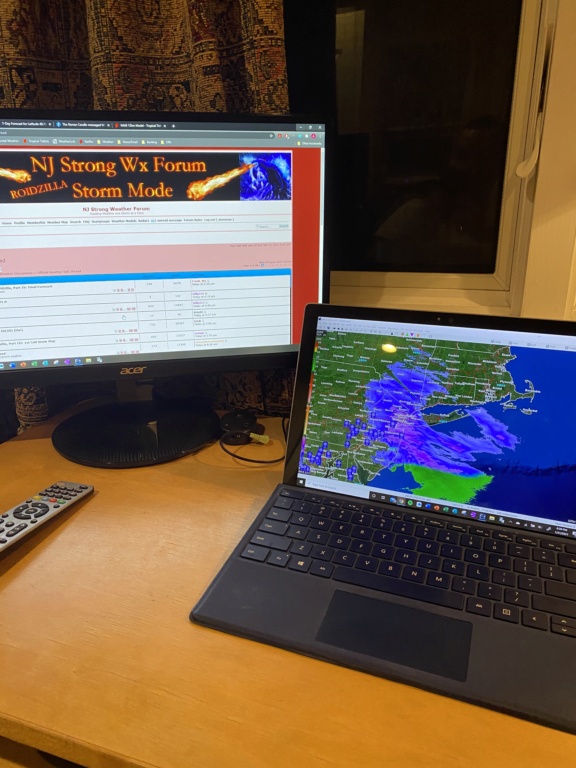 The "main" event transpires when we see the current 500mb, 700mb, & 850mb troughs, shift towards the Atlantic (off Delmarva), tilt, and "close-off", as it captures the surface cyclone. THAT, is when things get serious, and dynamics really show off (not *all* will be winners)