What I say this morning Peeps when I started this thread!
Going to change this winter in a hurry!!

Wow a Mecs/Hecs for South Jersey. Either it’s scoring a major coup or it’s off its rocker.

Look at the WAR press more and lift the confluence over Maine more N and thus slows up the energy. We are 2 hairs away in NYC and NNJ from moderate to major action.

amugs wrote:Look at the WAR press more and lift the confluence over Maine more N and thus slows up the energy.  We are 2 hairs away in NYC and NNJ from moderate to major action.

Going to be fun to see what models look like in the morning!

Yes WAR may contribute to more ENE and convection maybe chasing the baroclinic zone off NJ coast. It's very fascinating to watch this.

CMC ticked north. Good trends tonight for sure. Euro will be telling.

GFS is still a POS model. It's the only model that gives any measurable snow to NYC metro. CMC, NAM, UKIE, Euro, all farther south. There has been a northward progression on all models but still non give anything farther north than southern/central NJ. 00Z GFS also misses us with 06/07 storm yet other models show a hit. I think GFS will be wrong on both counts.

Euro! Euro!
Not a huge hit for the board (yet), but a HUGE hit for Ocean County on south and a HUGE jump north from what it’s been.

SENJsnowman wrote:Euro! Euro!
Not a huge hit for the board (yet), but a HUGE hit for Ocean County on south and a HUGE jump north from what it’s been.

Saw that haha wish that I had time to actually and sit and look a lot this deeply, but I doubt it

I feel like I let you all down by not contributing to this particular discussion. But my fight has been the long range pattern evolution. If I happen to miss my “no meaningful snow through the opening two weeks of January” by ten days from ideas presented before Thanksgiving, then that’s a busted forecast component that I can live with without too much internal conflict (though admittedly, I would still be a little upset

“SHORT TERM /6 PM THIS EVENING THROUGH 6 PM MONDAY/...
Bottom line up front: A major change in the forecast has occurred, at least for southern portions of the area. A potentially significant snowstorm is now expected to impact portions of the region Sunday night into Monday. This is a rapidly evolving forecast
and users should monitor the forecast closely through the course of today as additional changes, potentially significant, are possible.”

“ For days, we have been monitoring the potential for a wave of low pressure behind today`s cold frontal passage to potentially graze the region with precipitation, but most indications have been that
it would stay mainly to our south. Starting on yesterday`s model runs, and much more so overnight, there has been a major shift to a
more amplified, further north track with that wave of low pressure.

Meteorologically, this is tied to a much larger separation between ashortwave trough moving into the southern Plains and the frontal system which has been affecting us this weekend. This shortwave now
has the potential to amplify and acquire a negative tilt as it moves through the Southeast US, spurring strong cyclogenesis downstream. Extreme frontogenetic lift will cause a new precipitation shield to rapidly develop to our southwest by early tonight, eventually overspreading portions of our region.”

As of now, they have for 2-4”. That’s massive, cuz that’s the most they’ll forecast for the Shore until the day of an actual big snowstorm!

Man I hope this happens!

Sroc, Jan 7 2017 another analogous storm (hopefully) that comes to mind as to how some passing flurries and showers can turn into 6-10” for the Shore and LI. Very similar to this one in that the north shift kept on coming and so did a very unexpected nw expansion of the precip shield. That storm was also much slower moving storm than originally indicated.

Just in the time that I typed those 2 messages, TWC has upped my forecast to 3-5 with a 100% chance of snow. Amazing. 24 hours to hold serve…

06z GFs with a small step in the wrong direction, keeps SNJ in the 4-6” range with no real NW expansion. Brings maybe an inch or so into southern CNJ.

But the NAM! The 12k NAM was decent, but the 3k version drops double digits from northern Ocean County on down and brings up to 4-6” as far north as the Hook!

Any chance CNJ gets in on the action or is this just not our storm.

PHIL, Prior to the 6z GFS I would have said most likely yes, but that run took a noticeable turn back south. Overall, I would expect a small adjustment north and west in the precip shield to continue. As of now all the models have about 2-3” up to the 95 corridor.

SENJsnowman wrote:PHIL, Prior to the 6z GFS I would have said most likely yes, but that run took a noticeable turn back south. Overall, I would expect a small adjustment north and west in the precip shield to continue. As of now all the models have about 2-3” up to the 95 corridor.

Thanks, really appreciate the response. Would be nice to see a little something up here and I hope all the folks to the south enjoy

GFS has the lead the way on this storm so far. But of course nothing has occurred yet, so we will see if it is worthy of accolades. Latest Euro is damn impressive as are the sref's considering what was shown yesterday. This is Crapola Ratio snowfall. I'm not saying I buy these kinds of totals but the snow axis is NE-SW and it does keep pivoting more NW. 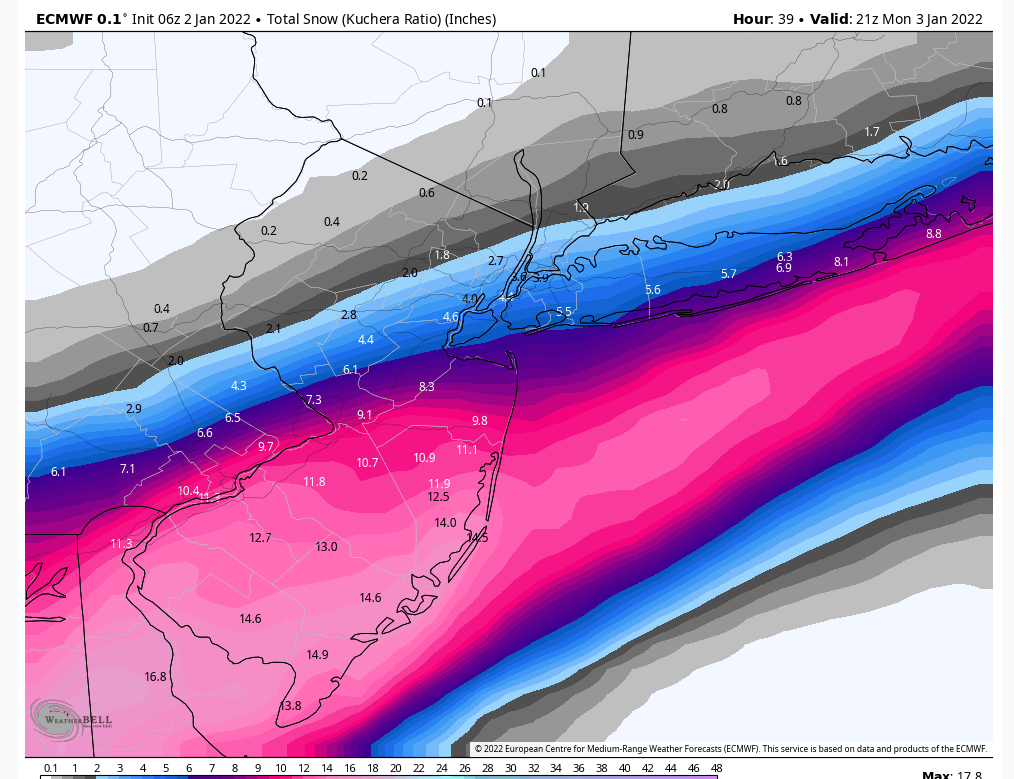 Latest SREF's. They run every 6 hours and they are short range ensemble mean of probabilistic snowfall. It's looking likely rt 78 south should have some measurable snowfall. 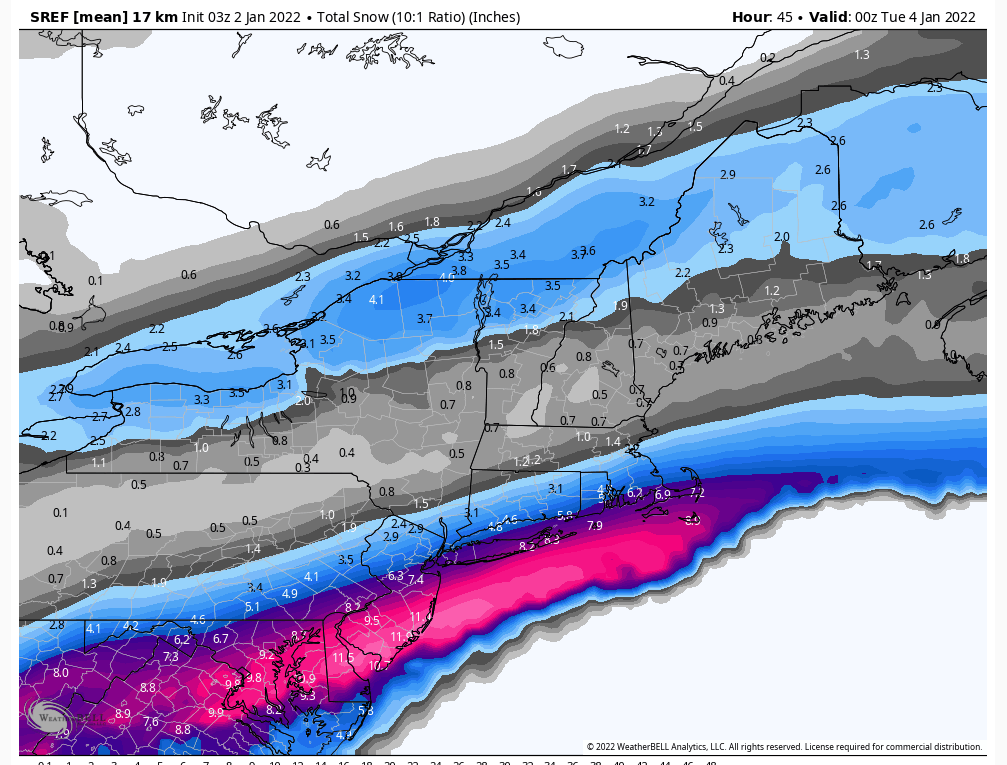 Have to say…GFS was not backing down from bringing snow to the area on Monday while every other model kept this storm well S&E. Now, all guidance insists on there being snow on Monday. How much will depend how far N&W the snow line gets. There will likely be sharp cutoffs to those N&W.

Temperatures are expected to fall 25+ degrees overnight after the passage of a cold front. Whatever snow does fall , especially across NNJ, is going to be higher than a 10:1 ratio. Probably more like 15:1. Here’s a look at how much precip falls on the latest EPS: 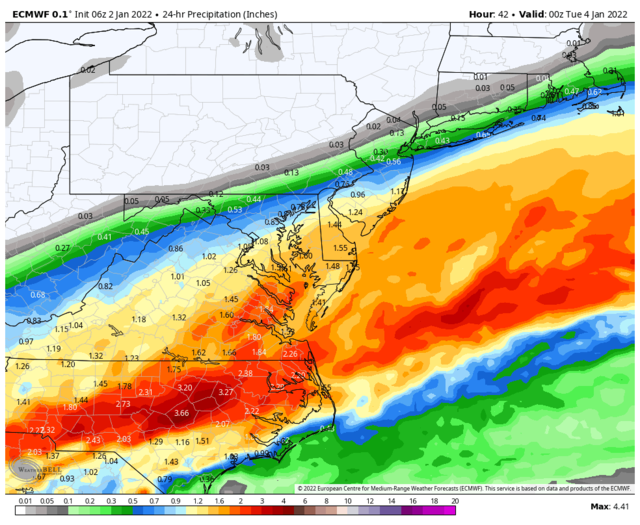 The dark green shading is about 3-5” of snow while light green is 1-3”. As you progress more south into the blue shade you’re looking at 6”+ of snow. Clearly, SNJ into the Mid Atlantic will be the jackpot where significant snow will fall. I’m fairly confident in saying that considering the setup. The tricker forecast is NYC because they’re right on the gradient. A tick more north and the city is looking at 3-6” of snow.

Until we get clarity I am putting the city in 2-4” of snow. This includes Long Island and NNJ (excluding extreme northern and NW NJ). Then as you go south from there you’re looking at potentially 4”+ of snow.

Thanks for the update Frank...and if I could humbly request: