@jmanley32 wrote:Wow 50% chance already of major covers entire east coast. I don't care what some might think I do not think this one is going it's. And no that's not wishcasting.

As of right now, I would say 60-40 that this makes US landfall. The WAR has been prevalent in these model runs. Even if Irma misses the trough which is becoming more unlikely, the ridge will most likely deflect the hurricane albeit further south. Anywhere from Georgia to Maine could have significant impacts with this dangerous storm. I think that the Gulf states are out of the game on this one, with Florida becoming much less unlikely. My gut tells me landfall occurs in OBX then comes up the coastline.

Good morning all.  Yes the GFS has certainly been painting a grim picture for us in the Mid Atlantic and NE over the last several runs, but keep in mind there is still much uncertainty in the H5 pattern beyond day 4-5.  Let briefly look at what to expect by day 4-5, then take a look at the set up beyond that.


As of this morning Irma's movement is no longer WNW, but rather she now has a trajectory of due west to even slightly WSW.

As we proceed throughout today into tomorrow I expect to see the track start moving SSW to SW.  What I think has become pretty clear, at least in my minds eye, is the track over the next 4-5 days.  I personally agree with the NHC track:

So by about 00z Thursday Irma should be somewhere just north of Hispaniola area.  Now lets loo at the H5 set up on 00z Thursday.  see below: 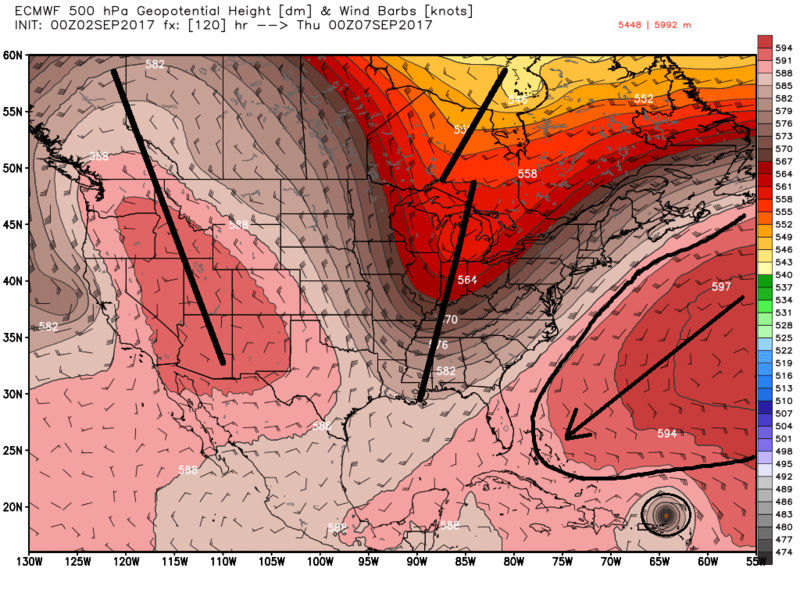 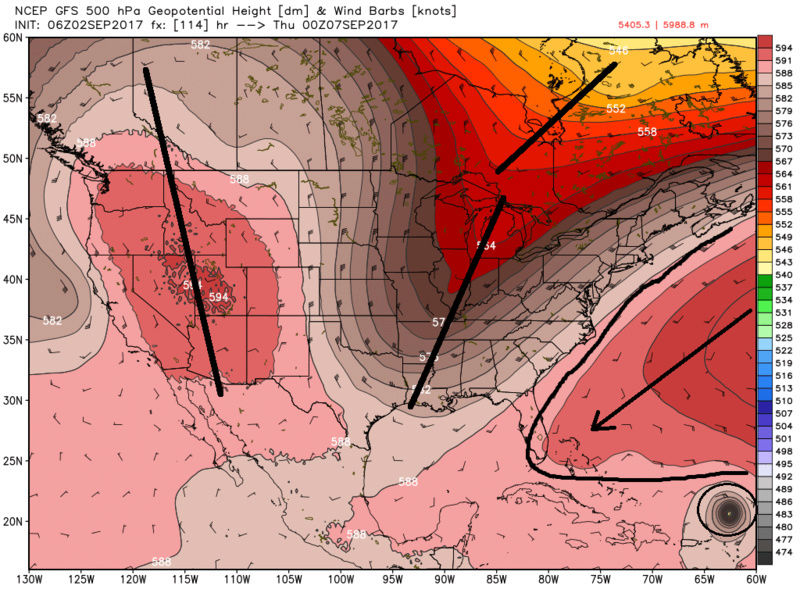 There are some subtle differences, but the overall H5 set up is about the same on both Euro and GFS heading into 00z Thursday.  The Western Atlantic Ridge(WAR) has a nose into Florida, a deep long wave trough over the Midwest approaching the EC, and a strong PNA ridge in the western CONUS.  This is where the two models diverge however.

By about 6z Friday(first image below) the GFS has been fairly consistent with showing a full on trough split.  Notice in the first image I have two aeas circled.  The northern most is a piece of the trough that lifts up and out; whereas, the second piece of the trough is beginning to cutoff from the main westerly flow.  By 12Z Sat(second image below) it is cutoff from the main flow as indicated by an upper level low (ULL) allowing the WAR to build into SE Canada effectively blocking Irma from escaping OTS and steering her into the coast.  As can be clearly seen on the second image below the ULL and WAR provide the alley way right up the coast.  So this is why the GFS has been showing a landfall north of OBX. 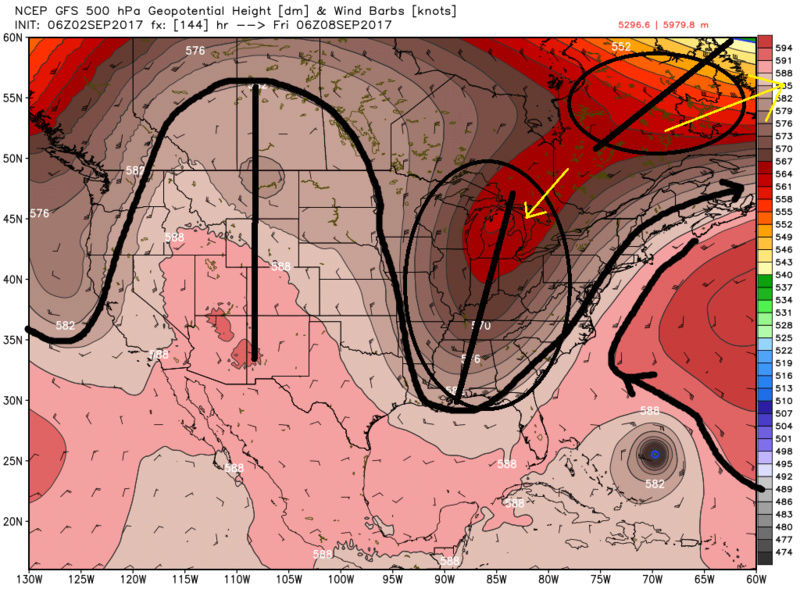 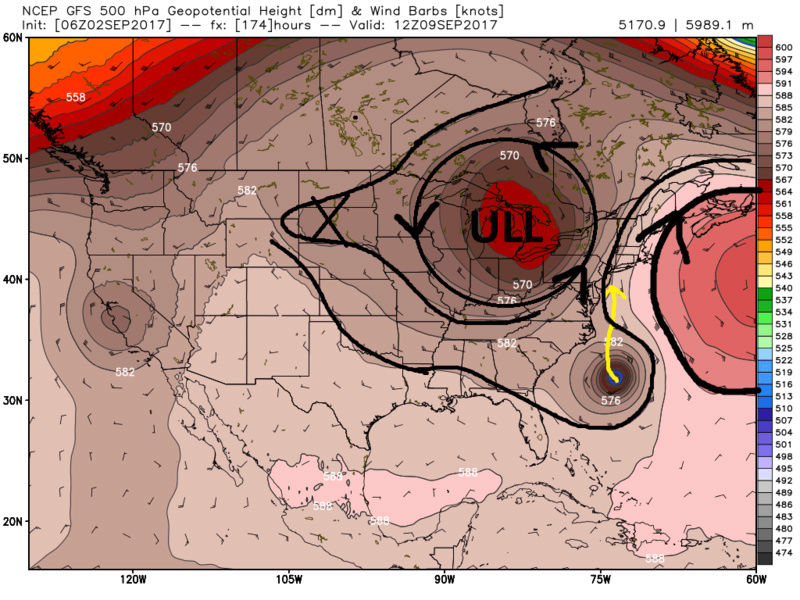 The European on the other hand by 6z Friday(first image below) instead of slitting the main long wave trough it trys to kick the whole thing out.  The result is by 12z Sat Irma misses the trough and weak ridging builds over top steering it further south and west when compared to the GFS.  Its the next piece of energy (black X in the second image) indicated by yellow arrow that eventually draws Irma N into the Carolinas. 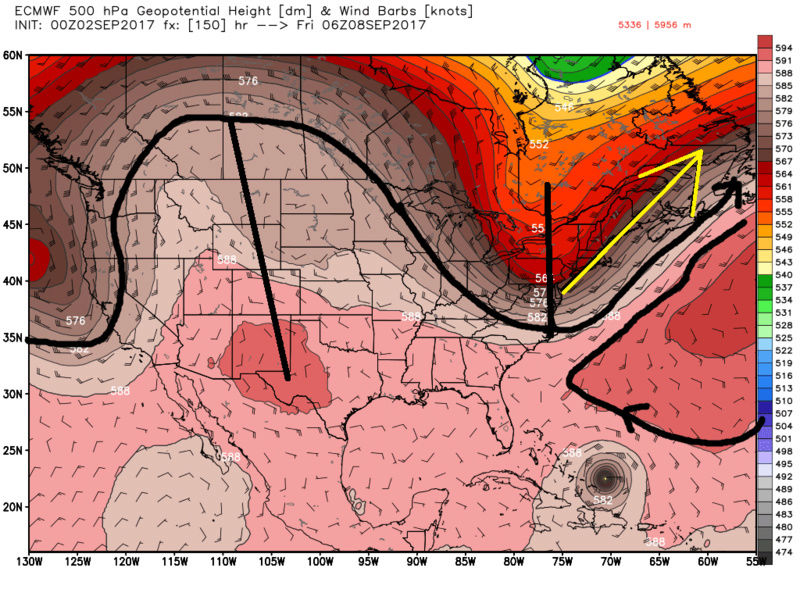 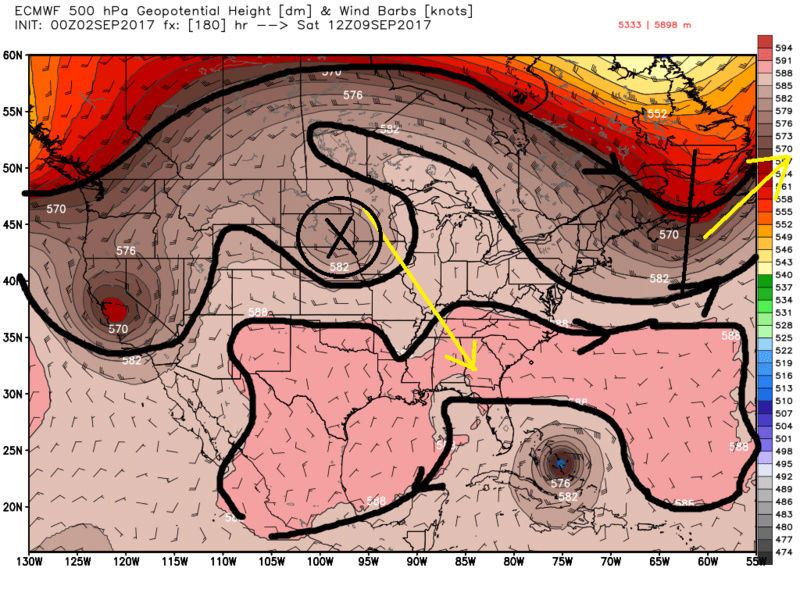 Here is the side by side comparison of the H5 set up between the GFS and Euro by 06z Friday.  As you can see models beyond day 4-5 are still worlds apart with the H5 setup, regarding what happens to the trough as wel as ridging out west, and even what's happening in the E Pac, but I won't get into those details. So again we cant take any soln seriously yet.  For me personally I will say I am heavily leaning against a landfall or track that ends up south of Cape Canaveral Fla and or into the GOM.  This does not mean; however, that I am excluding a landfall south of that nor am I excluding a track that takes Irma into the E GOM either.  In addition I am still not excluding the mean trough picking Irma up and re-curving her OTS before an EC landfall.  I think both of those solns are becoming less likely, meaning I am favoring an EC landfall some where between Cape Canaveral Fl and Cape Cod Mass.  Gun to head (60%-40%) leaning towards a landfall between Cape Canaveral Fla and OBX vs OBX to Cape Cod Ma respectively.  A few more days and we should start to see the two global models converge on the H5 setup.

@jmanley32 wrote:Wow 50% chance already of major covers entire east coast. I don't care what some might think I do not think this one is going ots. And no that's not wishcasting.

thank you Sroc and Nutley

Just a side note. In general we have been saying all summer how bad the GFS is handling tropics and the Euro is far superior. And in general this is true, but keep these things in mind.

1) we have a well defined system for both models to initiate on; not a disorganized area of convection which is what I think the GFS struggles mightily with. and

@sroc4 wrote:Just a side note.  In general we have been saying all summer how bad the GFS is handling tropics and the Euro is far superior.  And in general this is true, but keep these things in mind.

1) we have a well defined system for both models to initiate on; not a disorganized area of convection which is what I think the GFS struggles mightily with.  and

2) This is more about which model is handling the H5 set up over the Atlantic, north America, and the Pac better rather than which one is handling the actual tropical system better.  This closes the gap between the euro and the GFS IMO regarding which one is better.  Euro still handles complex set ups better than the GFS in general, but as others have mentioned already GFS was a little bit faster with Harvey, and go back to Juno, (I know Im cringing myself), The GFS was ahead of the Euro reading the H5 setup and Juno ended up further east than expected.

THIS. Definitely something to keep in the back of ur noggin for now. Man it's gonna be a long week.

What does that mean, Snow? 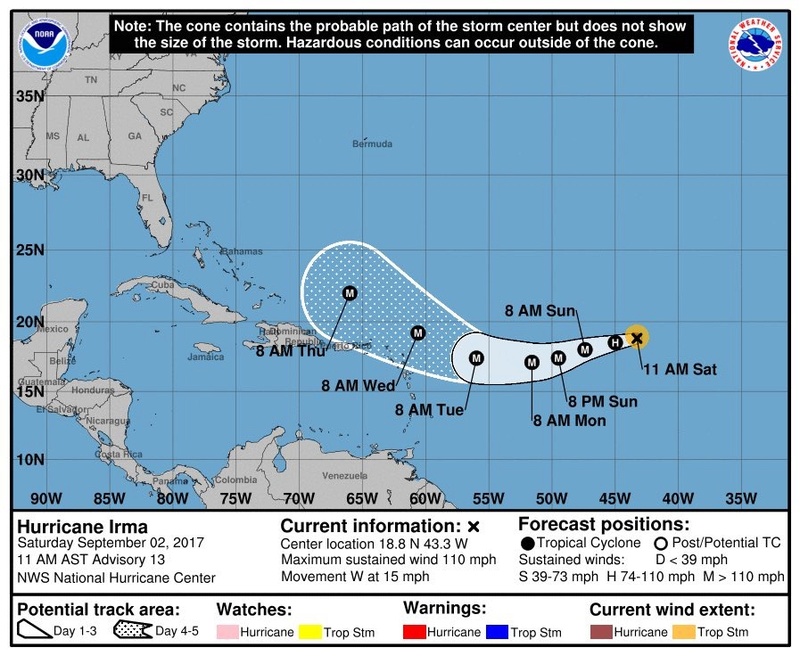 Navgem, CMC and GFS all support an H5 capture and slingshot back west.

@skinsfan1177 wrote:Navgem, CMC and GFS all support an H5 capture and slingshot back west.

I'm honestly quite frightened by the idea of a major hitting up here last 3 gfs runs put the area in the worst and that one over NYC the eye is literally over my street I zoomed in. Crazy week coming. Go b nsil biting imo. I've never seen winds over cat 1 I'm nervous to see 2 and 3 or above good lord. But we keep tracking and if this looks possible by wed or Thurs I'd start preparing if not B4 if we see a h5 consistency develop.

@jmanley32 wrote:Wow 50% chance already of major covers entire east coast. I don't care what some might think I do not think this one is going ots. And no that's not wishcasting.

No go to the guys page, trump supporter and amateur meterologist, I can see him get in hot water with that page.

12z GFS looks identical to 06z and yeserdays runs so far, right where supposed be on Thurs.

down to 911 on hi-res and nearly same spot, trough does not look as deep, is that going to change the track? to me looks like its go be very similar.

Wow! Down to 897mb at hour 162. Starting to get pulled towards the coastline.

If you look at full res it actually gets down to 892mb thats nuts.