And the AO is tanking in tandem 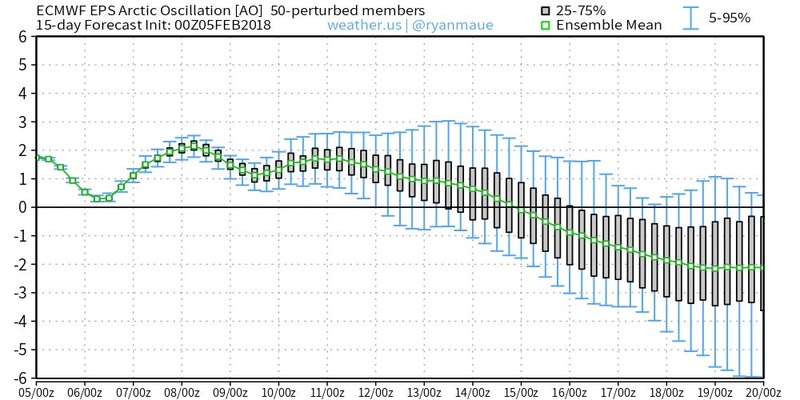 Well, the teleconnections are looking good, lets see if the trend continues! C'mon mugs, reel one in for Presidents Day

This is just amazing

@Radz wrote:Well, the teleconnections are looking good, lets see if the trend continues! C'mon mugs, reel one in for Presidents Day

Next winter we have Eric Webb now harping on. Weak Modoki El Nino

NWS forecast I posted this morning for Nyack NY which is a good avg for our entire forum got SIGNIFICANTLY worse in the last 12 hours. Here it is 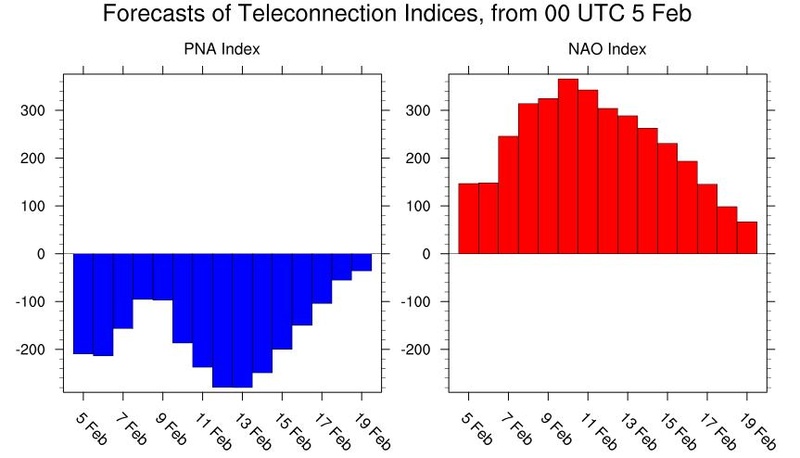 I don’t understand the need for people to keep posting telecommunications that show a favorable pattern. Predictions for next winter etc. shot the models this year have sucked up until 24 hours. Why even bother looking ahead. Yeah yeah I know this is the LR thread and it’s what we do but cmon. Very little to nothing this winter has panned out the way it was forecast to. Just look at the past 7 days and the next 5

This should not come as any surprise.  You see they are headed toward where we want them to right around Presidents day which is when we expect the pattern to become more favorable should the MJO and the strat work out they way we hope.  Here are the longer range projections.  Keep in mnd these are just graphs, and mean nothing unless they happen, but doagree with what is anticipated. 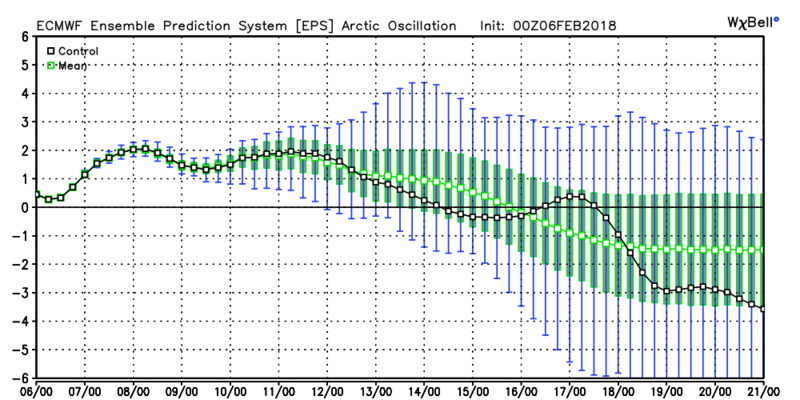 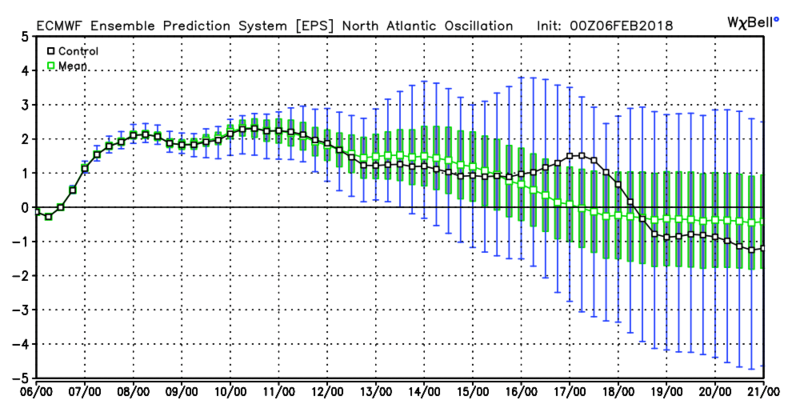 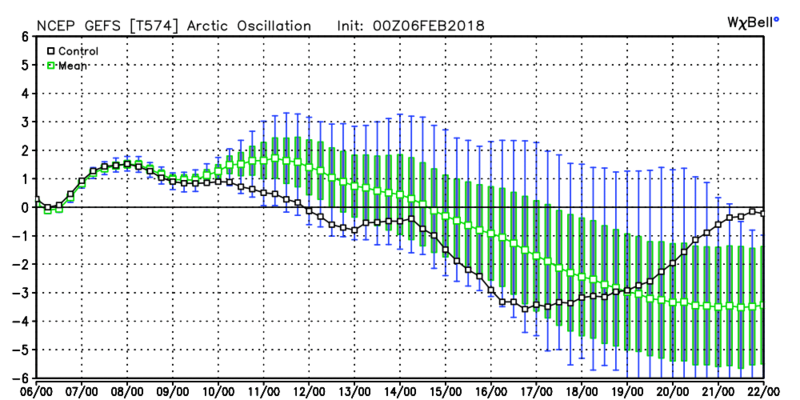 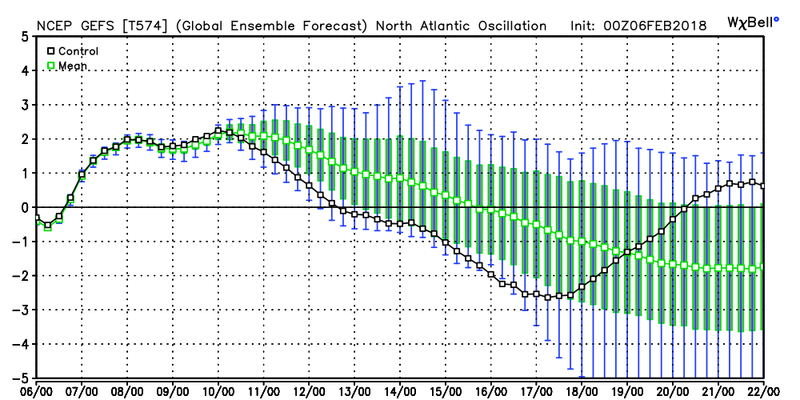 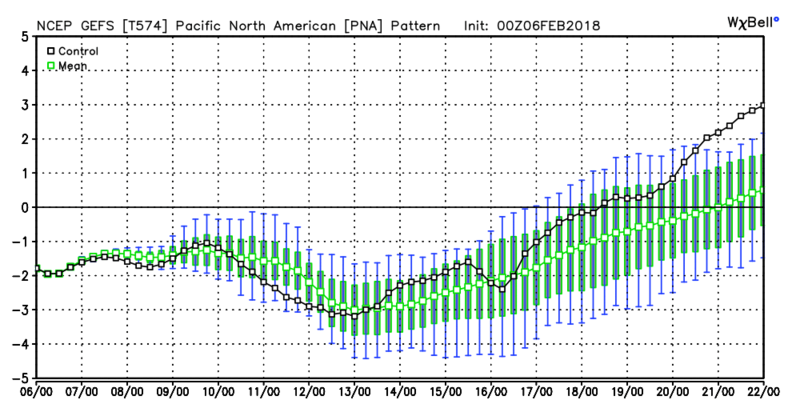 Mugs.  The GEFS have hands down led the way on the MJO forecasts.  The Euro has played catch up most of not all winter, but has esp true for this latest propagation and amplitude of the MJO.  GEFS have consistently been showing the MJO getting stuck in phase 7 in the LR.  Until today.  For the first time there may be a hint that it sees it moving further east into 8.  Fingers crossed for it is no where near a done deal with this look but if true we will see the pattern shift more favorable.  And even though the GEFs have led theway that's not to say the euro will not take the baton here, but we have to watch both models

Doc, the last two weeks of February through the end of March would be great if all this comes together.Here's hoping for ALL snow events instead of these slop fests.

syosnow94 wrote:I don’t understand the need for people to keep posting telecommunications that show a favorable pattern.  Predictions for next winter etc.  shot the models this year have sucked up until 24 hours.  Why even bother looking ahead.  Yeah yeah I know this is the LR thread and it’s what we do but cmon.  Very little to nothing this winter has panned out the way it was forecast to.  Just look at the past 7 days and the next 5

The xmas Dec and Early Jan period panned out well adn even lasted a bout 8 days longer than expected on a positive side. We knew and saw the relaxation period. Did the last couple of storms that the N & W posters get
Did we see the period being squashed that is after this week - not until about a week ago. When looking at LR Jim there are so many variable in teh winter and you have to look up North, Way out west, and In Europe to see how things will affect our sensible weather.
To say why post about next year is because when you have pro's on both sides of teh coin saying we are looking at a weak El Nino state it raises a flag to those in the weather community as I have posted. This is weather board and we are here to talk about things like this. It keeps thing interesting for one.
Tele's show where the pattern is heading and is used for guidance.
Yes models have sucked this year.
I trust Tom (Isotherm) Frank, Earthlight, Dougie Snow, SROC, rb and others in the consensus that will be a good to possibly great pattern from late February to midish March for the region. N& W may go longer.
_________________
Mugs
AKA:King: Snow Weenie
Self Proclaimed
WINTER 2014-15 : 55.12" +.02 for 6 coatings (avg. 35")
WINTER 2015-16 Total - 29.8" (Avg 35")
WINTER 2016-17 : 39.5" so far 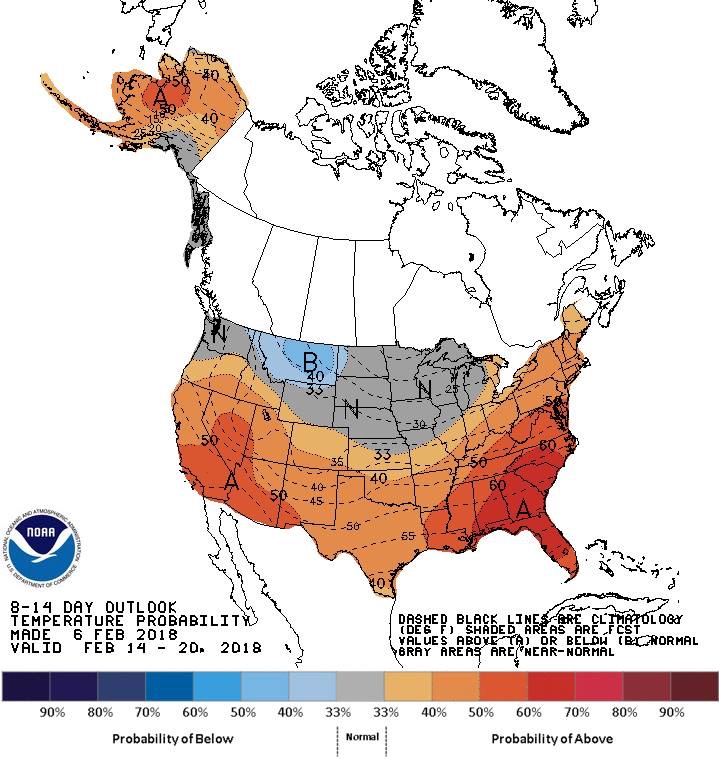 I am not giving up on winter yet. This month reminds me of last February so far I say that because if anyone remembers last February we only had one snowstorm and it was very mild. I no it's the only beginning of February and things can change let's hope we head into the right direction for the end of the month of February into march with colder and snow ear conditions with a Godzilla or rodzilla for everyone not only for the coast I mean for everyone my fingers are crossed

I'm boutta blow a gasket. I don't know how else to express the widespread sentiment that aside from only one person on this forum, and you know who you are (lol), the first 1-1.5 weeks of this month we're going to feature this back and forth game before things locked in. Admittedly, my particular forecast did not anticipate the MJO slowing into Phase 7 nearly as much as it has/is going to, which in hindsight is something I wished I had acknowledged better. However, although I was banking on the fact that the MJO was going to amplify as it came into Phases 6 and 7 before diminishing some as it went toward and into 8 and beyond, which is proving to be correct, I did NOT expect the magnitude we are seeing. As we know, as systems in the atmosphere amplify, their forward motion slows. This is no exception and a prime example, and is allowing MJO pulse to slow in Phase 7 a bit longer. HOWEVER, Phase 7 is also a transitional phase which also argues for a transitional pattern, but with all of my other prognostications having been very accurate (the approximation of the SOI crash, the third follow-up Wave 1 attack on the Stratosphere, and the overall response in the Northern Hemisphere (not bragging, but laying groundwork), cold is available to push, and it will do so. Do you think it's an accident that the last storm verified colder than forecast, or this coming system is going to wind up bringing wintry weather further south than initially thought? I posted it's absolutely NOT an accident, but a sign that the cold is beginning to push again in response to all of the factors in play, and it will continue to push increasingly more over the next 1-1.5 weeks as our beneficial factors begin to increasingly constructively interfere. What all of this boils down to, is the next 1-1.5 weeks will still be overall transient, BUT THEY WILL STILL BE BIASED COLD ACROSS OUR REGION WITH FREQUENT STORM THREATS AS THE CLASSIC BATTLE BETWEEN THE ARCTIC AIR TO OUR NORTH AND WARMER AIR TO OUR SOUTH CONTINUES TO EVOLVE. So, storm threats during this period will continue to be for these mixed type events, but once to approximately February 17-20th, we should start to be biased toward mostly snow events (assuming there will be storm threats and suppression is not an issue) and significantly below average temperatures right through Week 3 of MARCH, possibly even beyond, before we begin to step out of this again for the final time this season. While I admit I was about a week off with my personal forecast, I AM STILL EXTREMELY FIRED UP FOR THE REST OF THIS MONTH. The last step and resort I have is to do an explicit video detailing all of this, but I fear that would just be a third repitition ofnwuat has already been said. TRUST THE PROCESSES IN PLAY, PEOPLE, FOR THE LOVE OF ALL THINGS HOLY.

This will bust on the overly warm side. Playing the model-hugging game.

rb my man - I hear ya and have your back on your thoughts!!
MJO and SOI here look to be improving before our eyes by this map 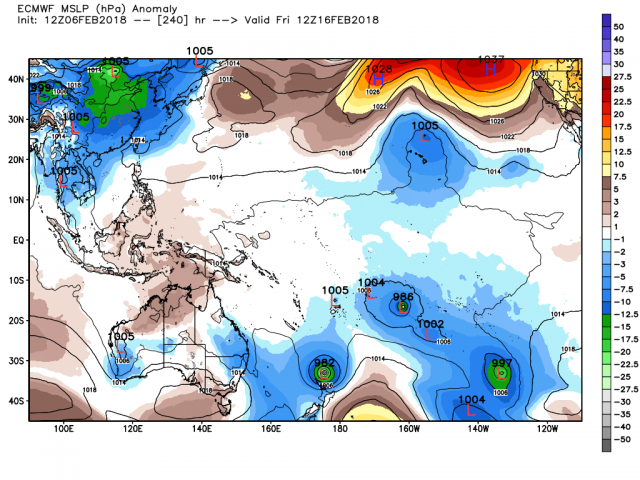 I'll take this MJO any day during this upcoming phase

rb as a coach for over twenty years.....YOU JUST FIRED ME UP. [b[/b][/b]. I’ve become very pessimistic about the rest of winter, however your post just brought me back from the presupice. I’m in. With you biotch. Bring it home.

Earthlight and Isotherm harping on blocking and SSW split -

Way too much focus on actual numbers, heights, temps, etc on ensembles. Focus should be on the Kara/Barents Sea...where the EPS are beginning to signal major high latitude blocking in wake of the SSW...

@amugs wrote:Earthlight and Isotherm harping on blocking and SSW split -

Way too much focus on actual numbers, heights, temps, etc on ensembles. Focus should be on the Kara/Barents Sea...where the EPS are beginning to signal major high latitude blocking in wake of the SSW...

Take a look at the 12z GEFS too.  Really starting to look nice.  Dare I say it....storm signal for the 16th-17th(+/- a day) time frame? Could it be enough to dig a northern s/w into the pattern more so than what we've seen? Preliminary general idea. That is all.

Ill tell you what.  With how fast the strat will change over the next 7days, and how linked the strat and toposphere are with each other with this SSWE occurring once the models figure out how it will affect the atmosphere do not be surprised to see DRASTIC flipping in the modeling over the next few days.  Flipping for the better.  Ray in his frustrated post earlier eluded to this as well...lol

I mean look at the teleconnections on the GEFS and how literally they are doing an about face on todays 12z.  Now keep in mind this is nothing more than a graph and its the first run, but by the 16th or so if the GEFS are correct we could be staring down the barrel of a -EPO/-AO/-NAO blocking pattern setting up. We have to keep an eye on the modeling because its going to change. 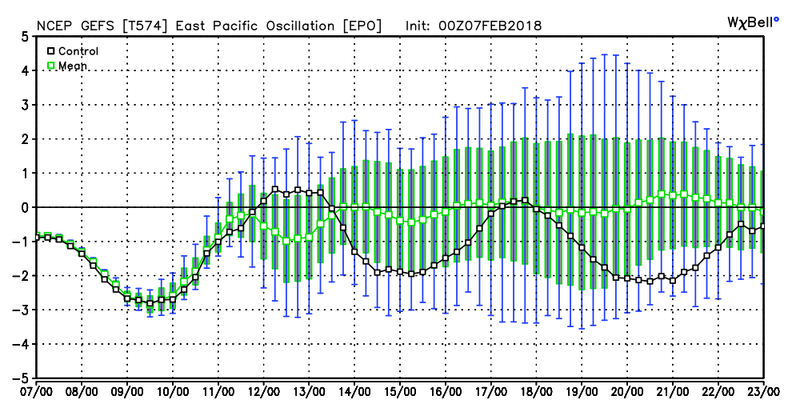 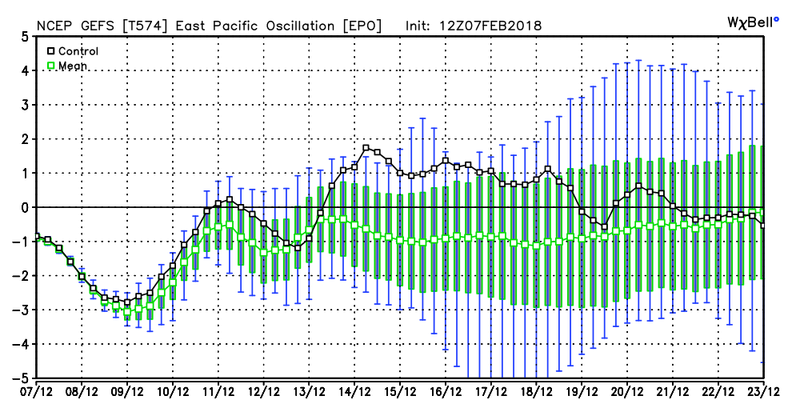 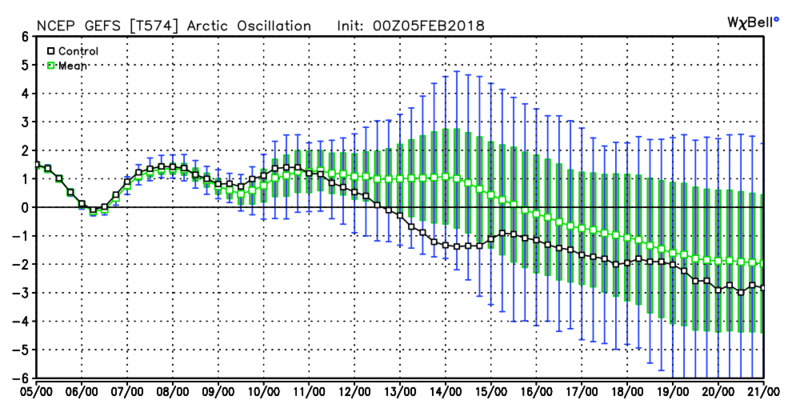 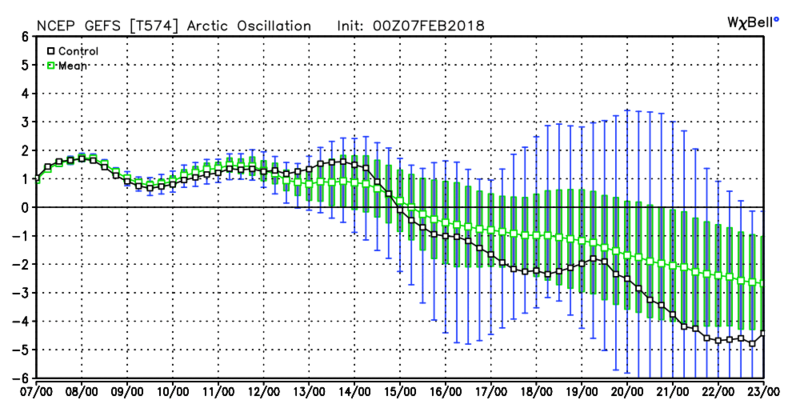 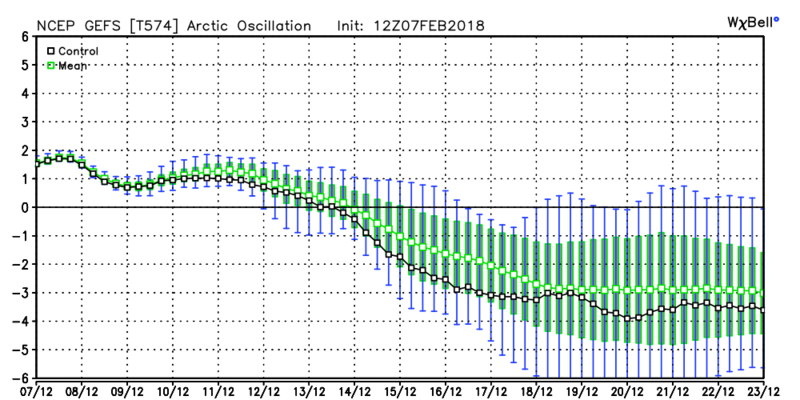 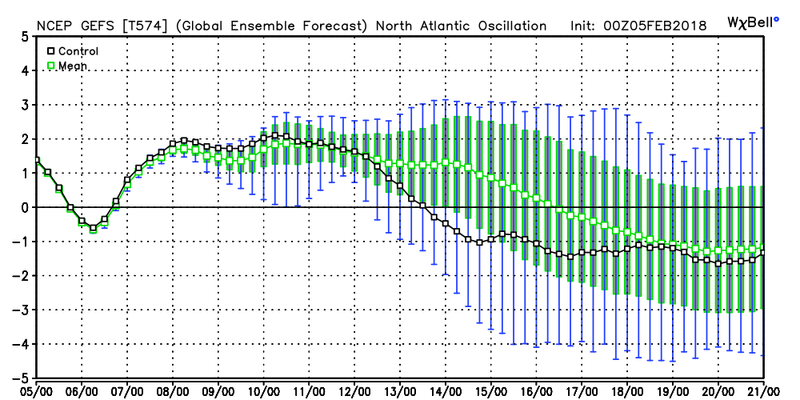 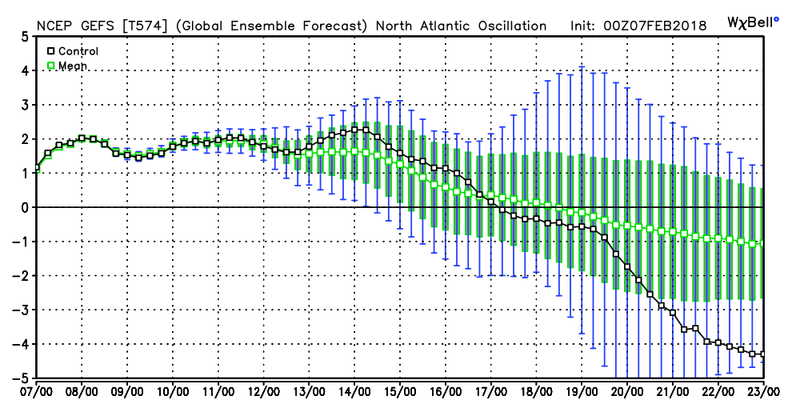 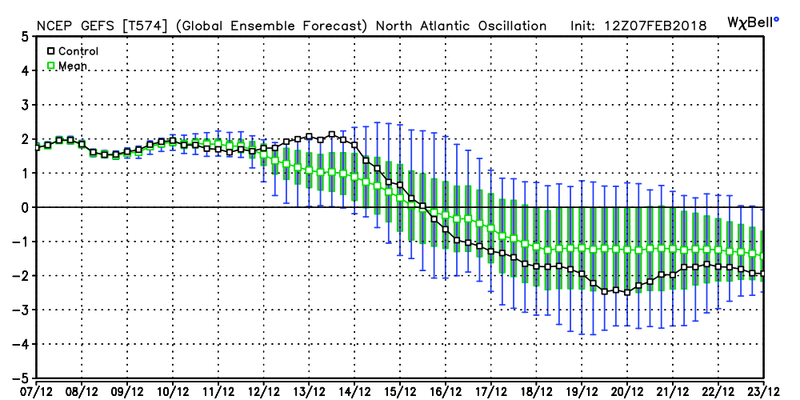 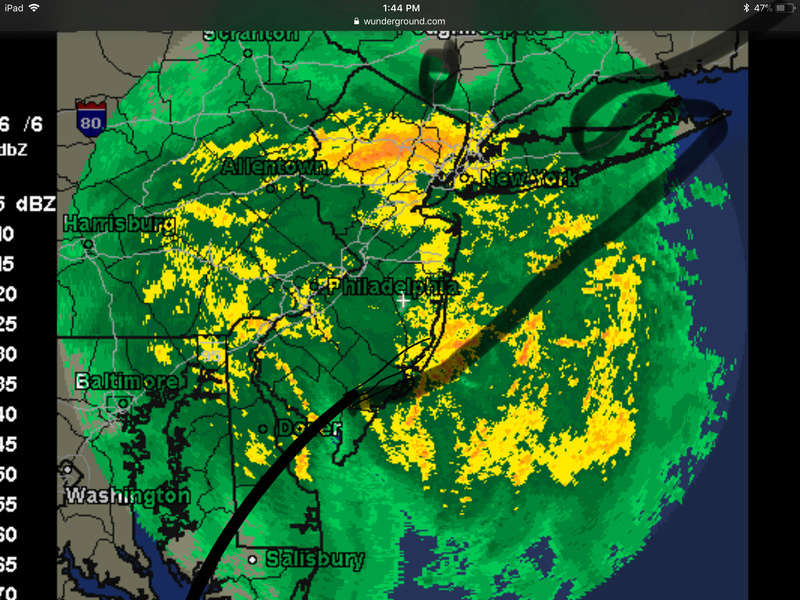