Hey guys, happy New Year! Got excited yesterday but was pretty busy, trends have been ticking west but as of tonights 0z had somewhat stalled, some still ticking west but some ticking back east. My general idea still holds, moderate to heavy snowstorm by the immediate coast, LI, and into NE, light to moderate (2-6") from 80 to 95 in NJ, less north and west. Very volatile setup with high bust potential, still possible most of us see nearly nothing, if it makes a last minute shift west another 50-100miles most of the I-95 corridor could get into moderate/heavy snows. I'd say keep an eye on high res and SR models for trends and precip starting now and tracking up until it's moving up the coast. By the time it's near Hatteras it's position should tell us where it's going to go, but I still think it swings just outside of benchmark with the fish getting a blizzard and very strong winds. We shall see.

Another note, with the angle of approach and wrapping precip field around extremely deep low, I think it needs to tuck in south of LI for most of the area to get into said heavy snows, I think the precip field will indeed be fairly small as the storm blows up. If it drifts further east as many runs are showing (S or E of BM) then most of the precip/banding will likely remain off shore. Just another ob. from tonights runs so far.

THE LATEST NAM IS BEYOND CRAZY

Hearing the 3K running now may be even CRAZIER.

Hello all, I’m very new to the forum. As you can see hahaa. But following you guys and wanted to chirp in because this storm is making me go crazy. Anyway HOLY NAM

Look at hour  35 how close to us is it at that point..don't know how to read these

Looks like the NAM is gonna do it for us. I've learned not to put all my chips in when it's just the NAM, but it got blizz 2016. Hopefully it's a continuation of the trend. Very good sign! Leggo!

NjWeatherGuy wrote:Looks like the NAM is gonna do it for us. I've learned not to put all my chips in when it's just the NAM, but it got blizz 2016. Hopefully it's a continuation of the trend. Very good sign! Leggo!

Unreal! It's literally a crippling blizzard on that run! I'm so happy (for now lol)

I am losing my sh*t 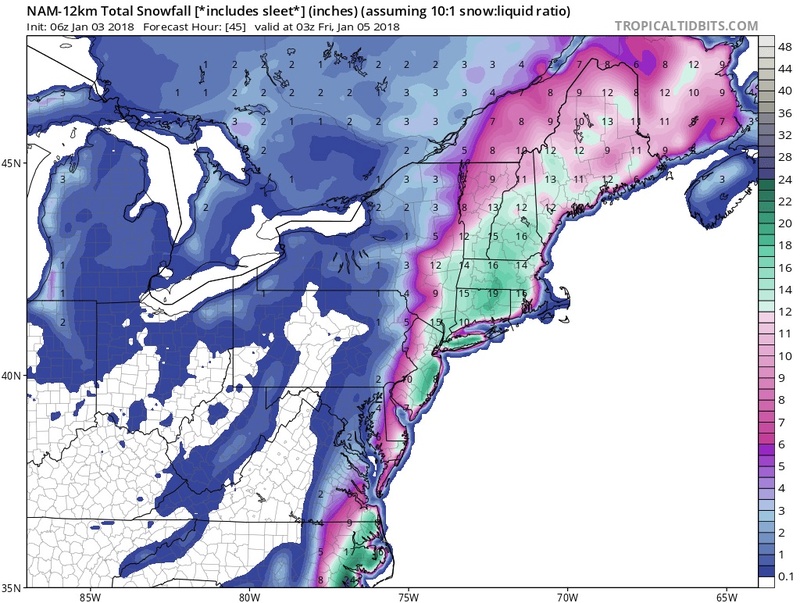 Are we really awake or am I dreaming

3K NAM IS ALSO A PARALYZING BLIZZARD for our area.

The NY NJ PA Weather forecast is more aggressive than the NWS forecasts which you can read here and here. So why am I going so much higher?

Well, this storm has a lot of similarities to the Boxer Day storm where the global models just were not handling the interaction of shortwaves very well. When I compare the shortwaves via the observations like satellite pictures and upper-level soundings, the overall solution to me gives more support with a complete phase of the two shortwaves diving towards the Mississippi River Valley this afternoon. If the complete phase happens as seen on the NAM, RGEM, SREF, and RPM; than the forecast above would be the result. If the phase is not complete and a piece of this storm is able to jump further east, then the whole precipitation shield ends up mostly off the coast and snowfall totals are cut in half.

In a case like this, I rather forecast high and than lower as to not put people in harm’s way. Images of people trapped on a highway in a blizzard do not sit well with me here. So I rather go high than try to be perfect, even though I rather always be perfect with my forecasting.

Regardless of track, the wind impacts are a significant concern especially along the coast but even over the interior. Aside from windchills being in the single digits and teens at the height of the storm on Thursday morning, visibility is likely to fall below 2 miles. The strong winds at 20 to 40 mph sustained along the coast with gusts over 50 mph at times, will also support the potential for power outages and minor to moderate wind damage. There is a concern for coastal flooding and also a unique concern with the ice that has formed in many bays around the region. The strong winds and tidal action may drive large areas of ice into structures along the coast, which could be a problem for boats and other structural features.

The forecast for this storm is highly volatile and changes are likely. Over the next 24 hours, the forecast for this storm will hopefully come in line and a final forecast is expected by tomorrow afternoon as we watch the storm begin to form off the Southeast coast. My advice is to be prepared and hope for the best, which is an incomplete phase and a track to the east-northeast.

The Next 12 hrs will be interesting no doubt!

So na m is always crazy with its precip...but even if we say we get half we should be happy with the trend..right

Also did last night's runs have the recon data included

3k NAM. Cp. you should be waking right about now. If the NAM is correct MADONNE! 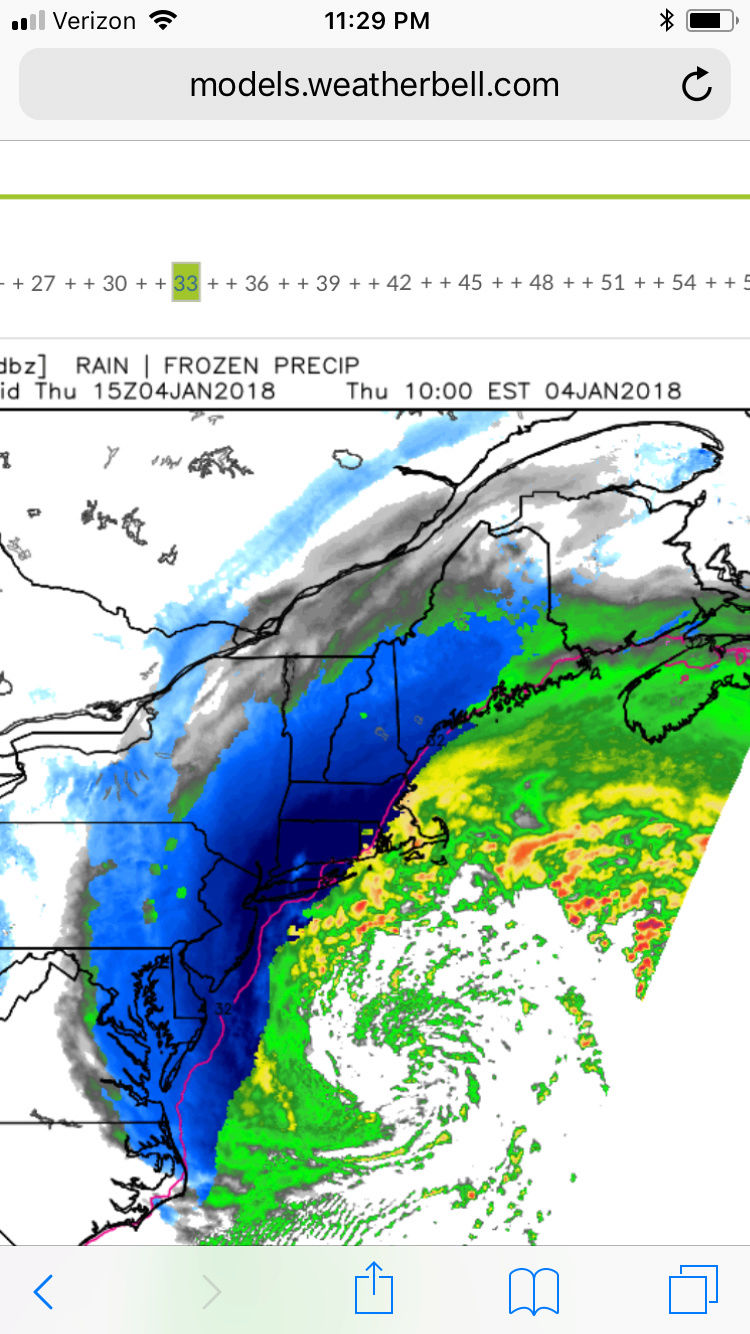 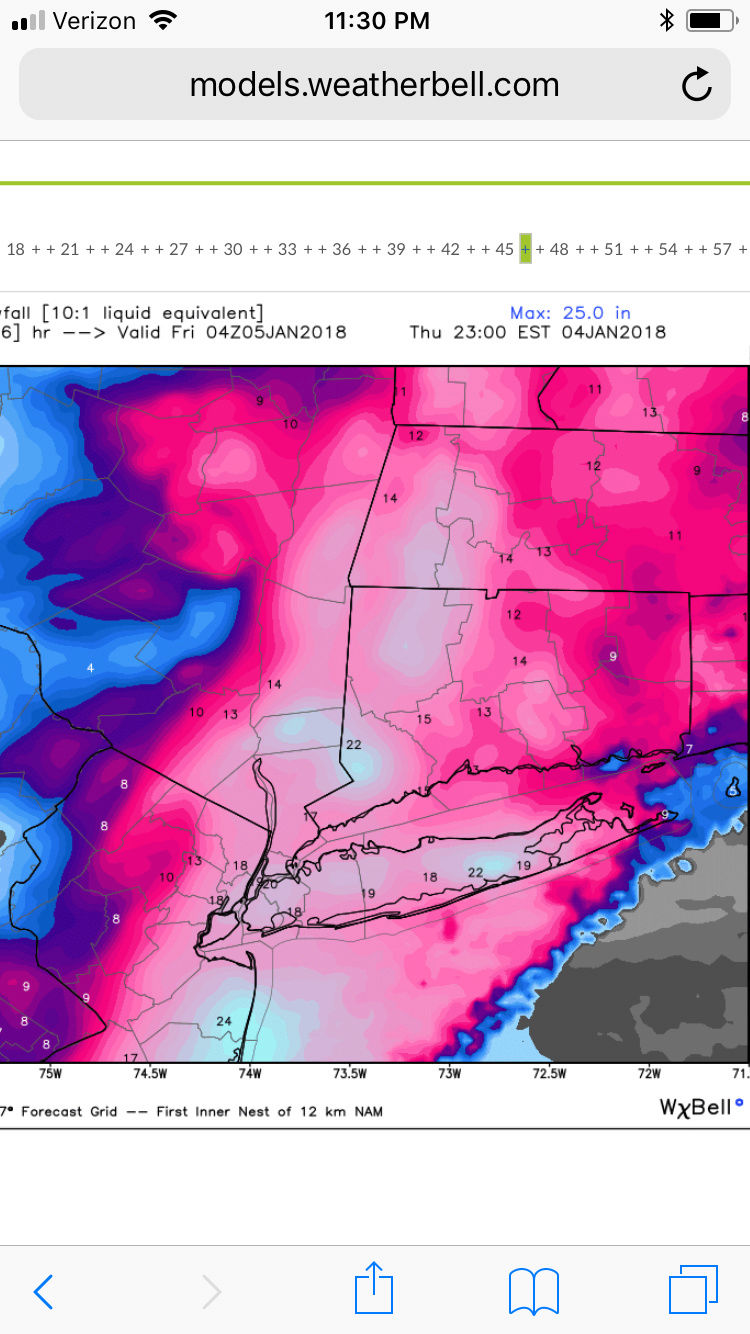 sroc4 wrote:3k NAM. Cp. you should be waking right about now. If the NAM is correct MADONNE!