The winters of 2013-14 and 2014-15 were well known for the sustained -EPO, which occurred despite other teleconnections (such as NAO) not cooperating.  What kept snow lovers along I-95 hopeful a good chunk of last winter was that we had the sustained -EPO.  The thing is: Like other teleconnections, it's not necessarily the index value but rather the location of the ridge or trough.  The aforementioned 2013-14 and 2014-15 winters had the ridge axis between Anchorage and Juneau.  The 2018-19 winter, however, had the ridge axis west of Hawaii.  Here is the 500mb anomaly from 12/15/18 to 2/15/19 to illustrate: 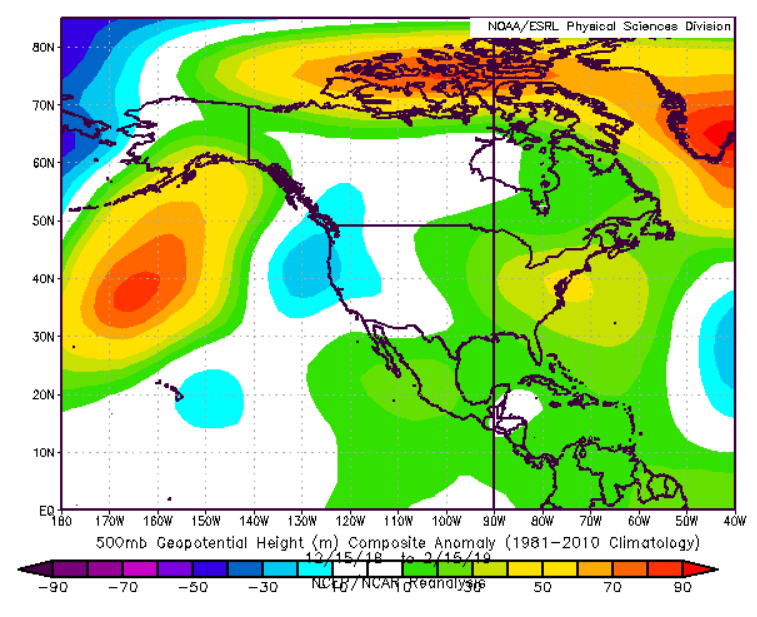 As shown, the fact the -EPO ridge was too far west meant the trough was on the West Coast of North America, which does not bode well for snow along I-95.

Now, let's take a look at what the upper level features look like, first at the teleconnections: 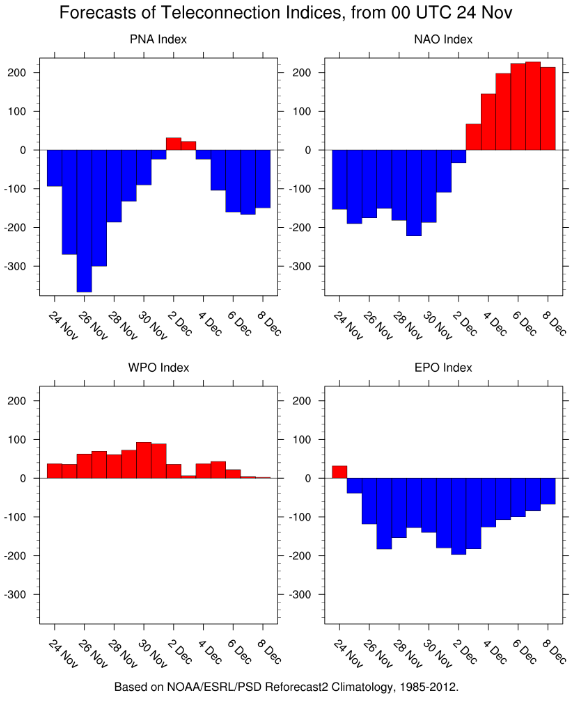 The PNA is mainly negative and the NAO, which at the moment is negative, looks to shoot positive going forward. The EPO is consistently negative throughout the next two weeks.  However, when we look at the 500 mb pattern at the end of the Ensemble GFS run, you can see where the ridge is located: 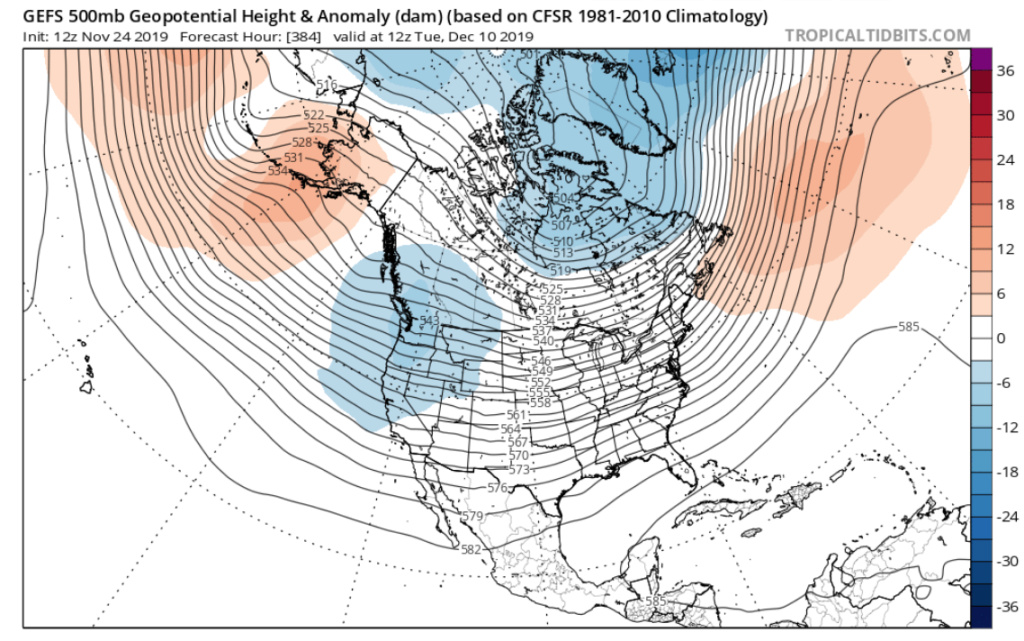 Yes, it's west of Hawaii, around the Aleutian islands.  And you can also see the west coast trough and the below normal heights over Greenland.  Not a great look for winter weather along I-95.

Now, if there is a window between now and then, it's next week as there looks to be a temporary trough in the East: 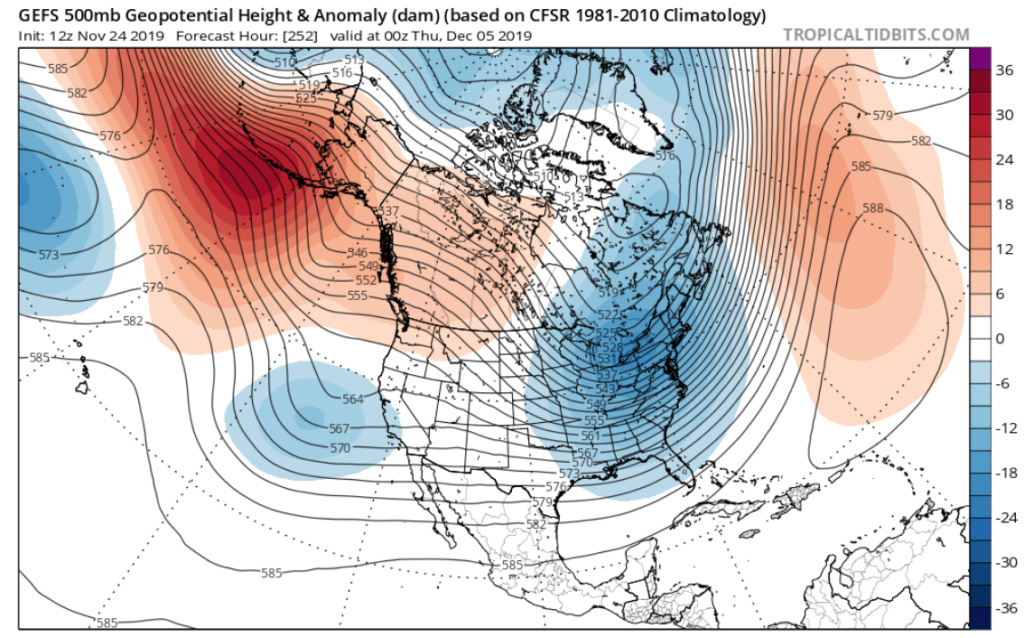 It should be noted though that while there are above normal heights over Western Canada, the ridge is centered over the Aleutian Islands, much like it is a week later.

Now, can the ensemble GFS be wrong going into December and can I-95 end up cold/snowy during the month?  Perhaps.  But these features that I see on the long range are not ones I like to see.

An extremely delicate situation unfolding early next week. You will notice the 500mb trough is closed off and already tilting negative on Sunday, and the western ridge is slipping east, but a psuedo 50-50 Low and -NAO could turn this into our first significant winter weather event of the season.

@Frank_Wx wrote:An extremely delicate situation unfolding early next week. You will notice the 500mb trough is closed off and already tilting negative on Sunday, and the western ridge is slipping east, but a psuedo 50-50 Low and -NAO could turn this into our first significant winter weather event of the season.

The mid week storm will play an integral part in clogging things up. The block over Greenland is in the process of breaking down as we head through the weekend but combined with the possibilities of a 50/50 low a transfer far enough south is possible. All the while a Rex block is setting up along the WC of NA.

Today's Euro almost gets it done has a stronger 50/50 low and stronger high pressure in response upper level low get south of us dropped several inches for our area. As a met said on another Forum that 50/50 feature has been under modeled since spring plus models always underestimate the strength of a block and want to push low pressure too far north into it. look for this to come South as we progress in time 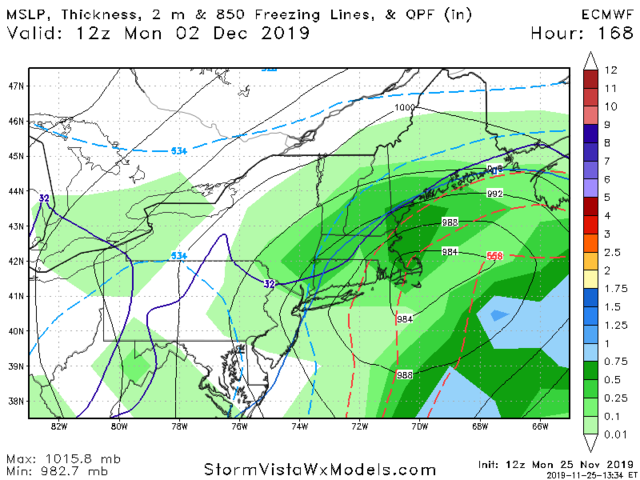 Long way to go but nice to see the signal. Question will be does the transfer trend faster, meaning a low developing off the coast further south prompting more cold air? OR does the trend go the other direction or stay where it is with a late transfer, the coastal low developing too late and warm air penetrating across the boundaries?

Long way to go but nice to see the signal. Question will be does the transfer trend faster, meaning a low developing off the coast further south prompting more cold air? OR does the trend go the other direction or stay where it is with a late transfer, the coastal low developing too late and warm air penetrating across the boundaries?

The 50/50 low definitely trended stronger on today's 12z eps also to math AKA Mike who now lives in Albany did you look at today's GEFS for the same time frame you posted yesterday? Well it now has an Aleutian low and a positive PNA extending from the West Coast all the way into Alaska and a trough in the east. EPS looks very similar at this time frame. The models are struggling mightily with the post 10-day pattern. My feeling is that they are struggling with the mjo which does not look to head into the warm phases anytime soon and is currently in the c o d looking to come out in one.

Gfs has a foot or so from around Hudson River east with as much as 15 into ct and mass is take that in a heartbeat!! Prefer be on 2nd though as traveling home on 1st.

The gfs had been hinting at this system back and forth for a while . I think there will be a storm just question is is it wet or white. And 970mb off Cape Cod slinging snow back as far as eastern nj!!

Definitely something to keep our eye on.  The mid-week storm seems to be influenced by the NAO blocking and the weekend storm influenced by the aforementioned stalled out low, at least as modeled.  As sroc pointed out we should know more after midweek storm sets up in mid latitudes to know more about where the transfer occurs and how stuck the weekend storm becomes.  That is probably the key.

@heehaw453 wrote:Definitely something to keep our eye on.  The mid-week storm seems to be influenced by the NAO blocking and the weekend storm influenced by the aforementioned stalled out low, at least as modeled.  As sroc pointed out we should know more after midweek storm sets up in mid latitudes to know more about where the transfer occurs and how stuck the weekend storm becomes.  That is probably the key.

Some models overnight showed precip falling a prolonged time 54-60hours. Also imo I think it can tick south some with the strong block in place often times models underestimate the strength of blocking

The pattern I see so far is the Central and North Central parts of the CONUS getting pounded with big snowstorms.Hope that doesn't set up for the entire winter!

Basically below normal temperature  through Sunday then we'll have to deal with a cuter on Monday and Tuesday there could be a wave that forms on the front as it sinks south of us so we'll have to watch that for Wednesday. after that the Arctic Express comes in and should be fun times right after that as Frank just mentioned. By my calculations if guidance is right we should be near -5 in Departures by the 15th potential big bust for all the warm December forecast and there were many

After teh warm up Mon and Tues after teh cold arctic blast this set up is loking nice for cold and storminess.
Look at the PNA in orange colors over the west coast that extend all the way up and over the arctic into the Greenland region. The deeper blue color over just south of Alaska is the Aleutian LP that will deepen and help pump this ridge. Deep trough develops in the Eastern portion of the CONUS.

Definitely should get a blast of very cold air over the central and eastern U.S. by next Wednesday and through the end of next week. Question is: Can we get a storm in here -- and to our east -- before the air mass moderates after next weekend. I'm looking at next weekend as a time to keep an eye out for something wintry.

- I will sign giving the rest of my large intestines for a winter redux for this - this was a bomb of a winter with a gradient set up just to our south. We ran of space to put snow!!!
MLK Ice storm - back to back MECS, multiple over running events mostly snow, 9 days off from school, High Point tied the state low temp record of -34 set back in 1934 by River Vale. This is delicious and very exciting to see.

Why, we have low solar for one, two we have a PAC SST in Nino regions that are favorable for a phase 7,8,1,2,3 in the right months and we have positive juju!!!! 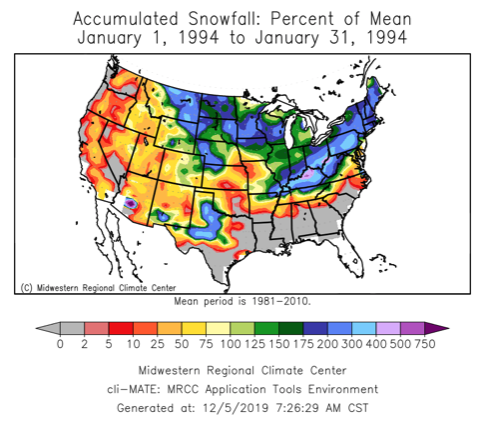 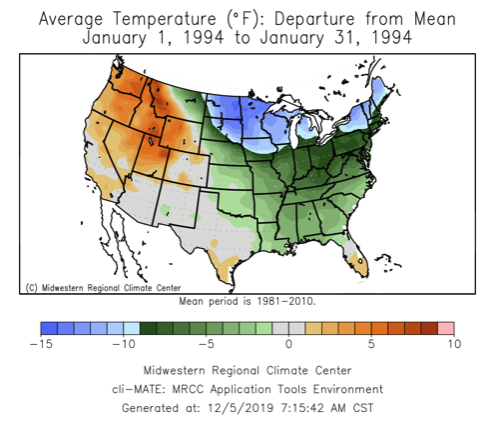 As I read online, Twitter and looked at the maps and Rayno video we definitely have to watch for a possible storm after the Apps runner storm next Mon/Tuesday for a wed/thurs storm. Draper that front off the coast and the lagging energy rounds the base and pops a coastal.  Where is the question and the beast storms are those not modelled 4-5 days out than BAM!! We'll be the 1st to know here!!

Look at how the N EPO  gets reinforced

Regarding the 14th-17th potential threat:

“No doubt your concerns are valid. But I can see how the system establishes its own pseudo-block here, similarly to our previous system. The hemispheric alignment, to me, supports phasing between the southern stream energy ejecting out of the Southwest and northern stream energy diving straight out of the high latitudes (which these are notoriously undermodeled in forward propagation and intensity *when high latitude blocking is present*, anecdotally in my experience, and in this case we will have as of now). However after this phasing process is underway, we lose the PNA ridging as energy starts coming ashore and damping the height field. Concomitantly, we have a second spoke coming down in response to the high latitude blocking, but at face value, this is what leads me to think that our system phasing in the Southeast might not cut. Because the PNA/EPO connection was severed by the energy coming into the Left Coast, that second spoke should start slipping eastward as its tendency to dig lessens. Simultaneously, our phasing system is working raise heights out ahead of it. Essentially, the race is on between the forward speed of the second northern stream spoke getting out ahead of our system, because if it can outrun it, it will work to enhance the confluence over the Northeast and put a lid on the northward progression of the system in the Southeast (hence the pseudo-blocking). The airmass may initially be tainted, especially for the coastal sections, but that confluence would force either a further east track of the primary, or a redevelopment off the coast with a slow forward propagation due to the closed off mid-/upper-levels, much like we just saw. So that fresh delivery of cold air by the second spoke would be waiting not too far away to be drawn in. HOWEVER, this would be coming out of the right direction for something big. I’m not sold on this evolution, but based on brief analysis, I’m more than intrigued by this possibility right now. Just food for thought.”

@amugs wrote:Big cutter next week then a cold shot then we look at next weekend for potential and from the 17-20th for a SECS storm IMO - I know skins has 15-25th and he may hit the nail on the head 2 maybe 3x!!!!

I got curious, and you know what the 14th-17th threat is reminding me a lot of?
.....
A further north version of the November 15th-16th storm last year that hit the southern Mid-Atlantic and Southeast. We don’t have the -NAO, but we do have  the -AO. The rest of the hemispheric progression is very similar. Further food for thought. I definitely need to explore this further lol

Actually, I don’t think I have my dates right. When was that suppressed storm last year early in the season?

It was December 8th—10th, so I’ll have to double check my earlier thoughts and make corrections later, if needed.