The kids these days say 'its been a hot minute.'

Well, its been a hot minute since I have crafted a snowfall forecast. Our last couple of winters have not been active. There were some light to moderate weather events but nothing truly high impact that warranted losing sleep waiting for model runs. I'll be losing plenty of sleep over the next 48 hours, but we have been sleeping all year in quarantine so we are all energized, right?

For the last several days we have watched models track a strong low pressure system up the coast. Models like the EURO, RGEM, UKMET, ICON and NAM had the track either on or just off NJ coast. On the other hand, GFS and CMC have been keeping the storm south and making an abrupt turn east once it reaches Cape May, NJ latitude. Each path has significant differences to our sensible weather. The former keeps the heaviest axis of snow over central PA to central NY, and the latter brings this axis through eastern PA and much of northern NJ, SNY and CT. The main reason why there is divergence in the models is because of how they handle the storm's interaction with the blocking situated in southeast Canada. 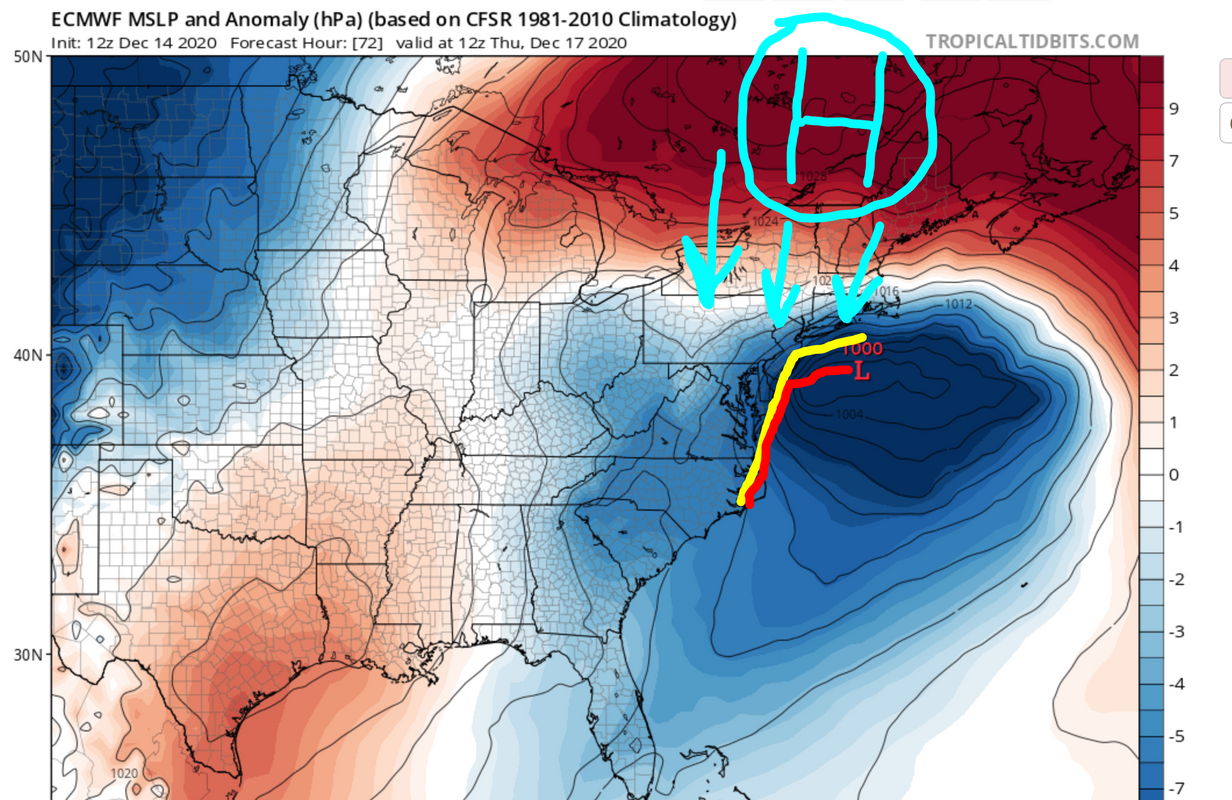 The large area of High Pressure in southeast Canada is doing a couple of things. First, it is the main mechanism ushering cold air into our area. Secondly, the absence of this High would mean a storm track well west of our area and floods the coast with warmth and rain. When the primary low associated with the 500mb trough in the midwest feels this HP's presence, it cannot advance northward and transfers its energy to a secondary low near Hatteras, North Carolina. The secondary low then begins moving north, as heights along the east coast are amplified in response to the anomalous vorticity in the 500mb trough, and has to follow the path of least resistance. In yellow is the path the storm takes on the RGEM and some other models. This is the path I referenced that would keep the heaviest axis of snow in central PA/NY. However, the red path is the most recent path of the EURO, originally a model following the RGEM, that realizes the blocking to the north is too much. It is basically a giant 'STOP' sign for the storm and forces it to turn east and move east-northeast. This is similar to what the GFS is doing with the storm. 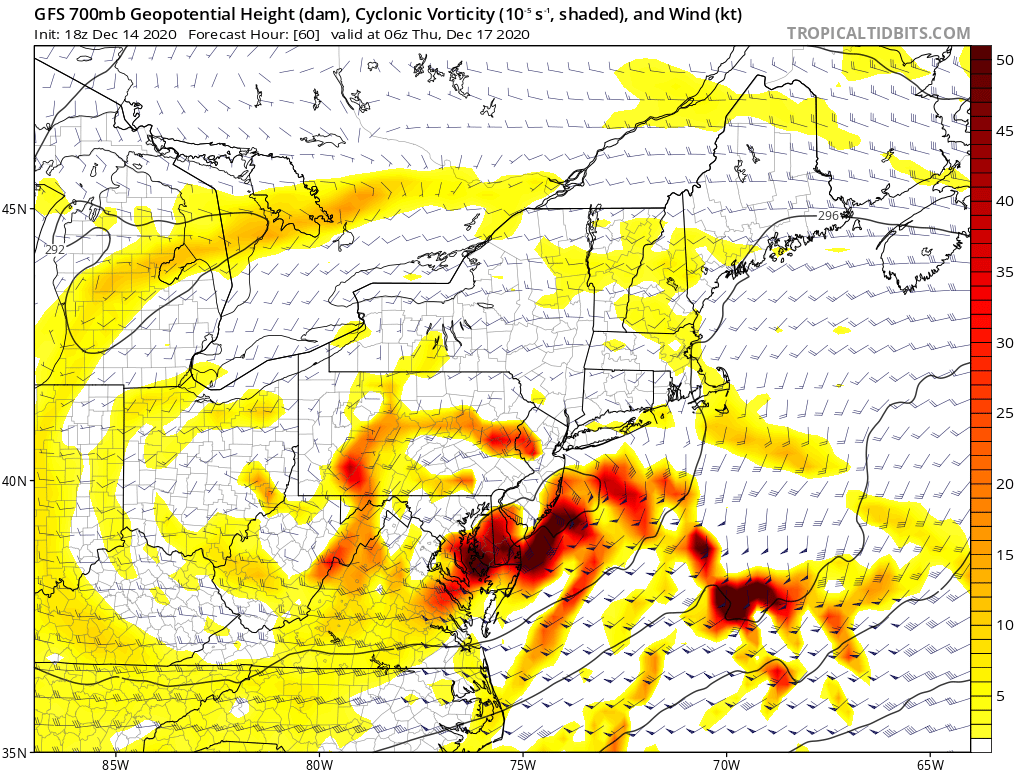 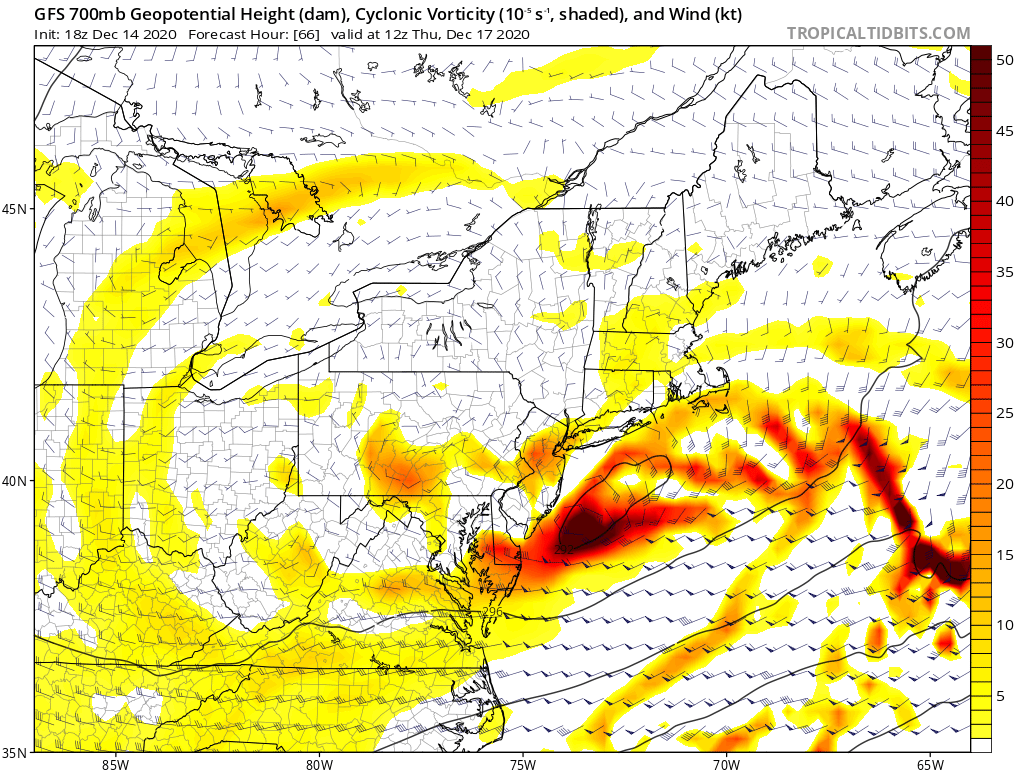 Also key in any snowstorm is the exact track of the 700mb low. Areas who are centered over, south or east of the low are likely dealing with warmer boundary layer temperatures and possible dry-slotting. Meanwhile, those lucky enough to be on the northern sides of this low will experience frontogenesis, or enhanced snow rates. The same goes for the 850mb low. When these lows are stacked, or on top of one another, it often means the storm system will generate the best dynamics to produce prolific snowfall amounts. From the images above, you can see the GFS take the 700mb into southern NJ, but instead of continuing trying to go north, it makes that sharp turn east-northeast. Again, the High Pressure doing its job of suppressing these lows and stopping warm air sneaking into the temperature columns. 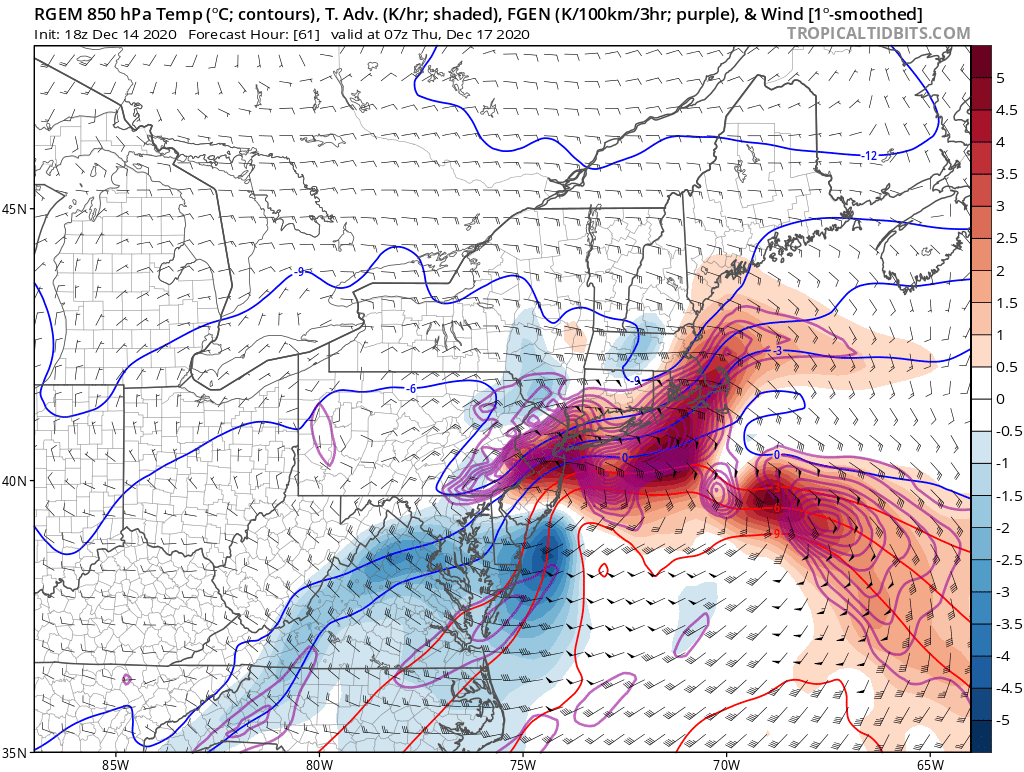 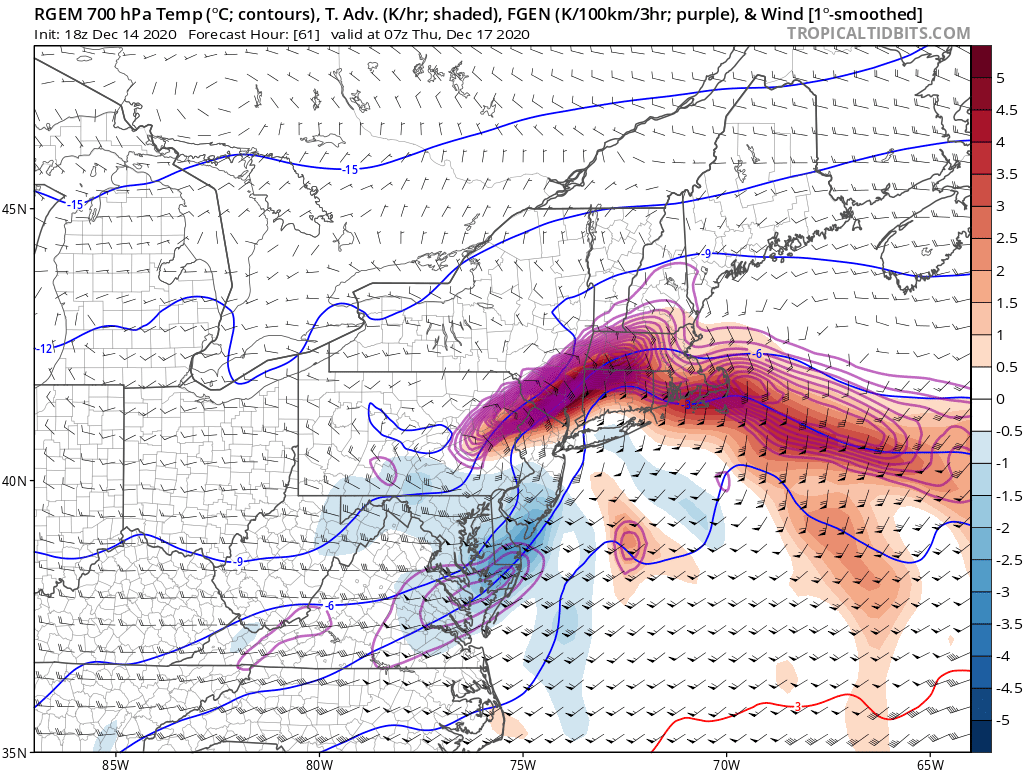 I am posting the RGEM's 700mb frontogenesis forecast not because I agree with its placement (shades of purple), but because I agree with its potential intensity. We are looking at snowfall rates in excess of 2"+/hour under some of these bands. I believe the storm will take a track close to where the EURO/GFS have it currently, and the lift associated with the dynamics at play will produce surreal snowfall rates that is likely to cause thunder-snow. 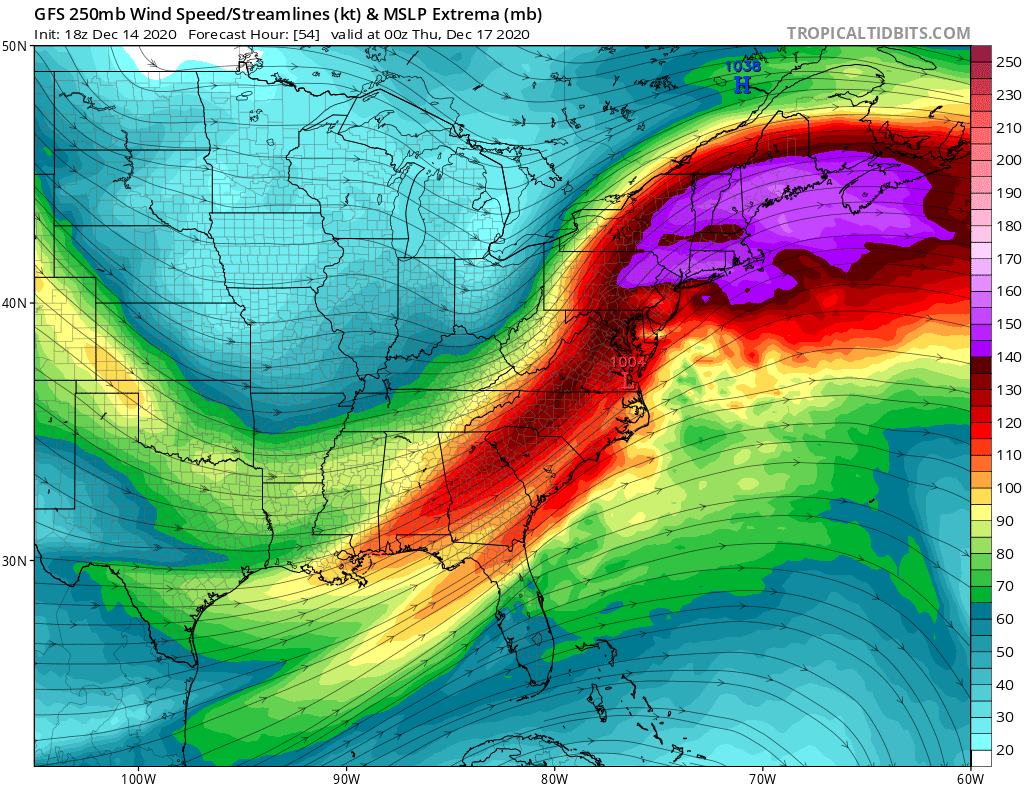 The presence of a 160KT 250mb jet streak north-northeast of the storm aids in opening up a path for the storm to move north instead of out to sea, while also throwing more fuel into the system. The convection that is likely to develop as a result of this jet streak and lower level dynamics is why this storm is categorized as 'Godzilla.' There will be widespread snowfall amounts in excess of 1 foot. 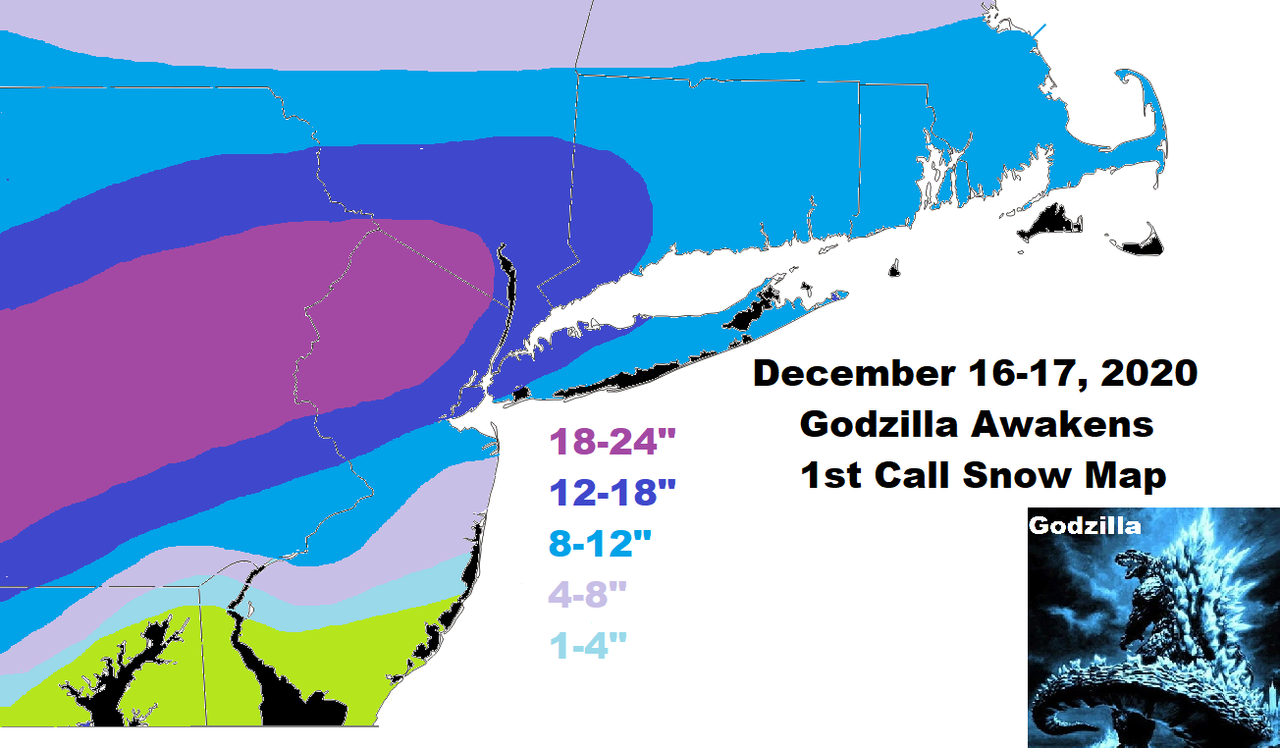 These are my preliminary thoughts. Not mentioned, but should still be taken seriously, is the threat of high winds along the immediate coast. Gusts could exceed 50 mph at times with blowing and drifting snow. There will be power outages in areas of the state. Make preparations as if you will be without power for a couple of days, especially those in central NJ/Long Island where significant snow is forecasted along with high winds.

A revised forecast will be issued around this time tomorrow night.

Great analysis Frank. Bernie saying 3-6" for LI, but with latest guidance taking the upper level low over or just south of NYC metro, along with heavy precip rates, i dont see it mixing that much and would think 8-12" is more realistic.

For LI peeps, this is where i think you will see the mixing line push onshore during the height of the storm for a couple hours before crashing back southeast. those west of that line I think will see very little to no mixing impacting the snow totals 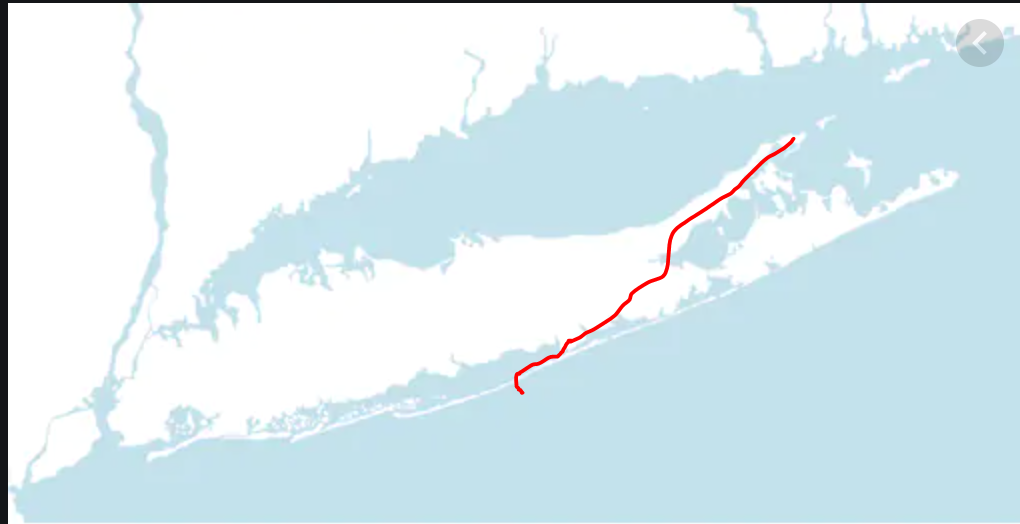 Thanks Frank Great right up and map Tell me will the high pressure hold for duration?

Great write up easy to understand and follow. Thank you for the snowmap as it perfectly cuts Long Island but leaves me in your dark blue zone.

Alex- I am in Manorville, looks like your R/S line comes right to my backyard

Nice map Frank, 12-18 ill take it in a hot minute, id like to see that 18-24 come over the hudson in your next map plz lol. but serious question, why do you think that band stops just west of the hudson? Also when you say power outages in parts of the state does that include NYC area? My wife wants to know if we could lose power, im thinking its possible but not as likely as along LI or coastal jersey.

Solid map. Definitely like seeing my back yard on the border of that 12-18 and 18-24 zone. I could see the 4-8” extending further north/west right up to the Delaware River at Philly, keeping the 8-12 on the PA side of the River down there (maybe even a tick west of that with 4-8” into Center City/River wards and 8-12 in the colder sections of Philly like Chestnut Hill, Manayunk and Northeast Philly. Oh wait, that’s my Philly upbringing kicking in, nobody here knows or cares about those spots on the map. Lol). Other than that, the map looks on-point to me.

dsix85 wrote:Alex- I am in Manorville, looks like your R/S line comes right to my backyard

I know that area well. Im out in St. James. From past experience with these set ups that is where i see the r/s line. Sometimes it takes some local experience to see where the bias of the r/s tends to be over/under modeled on models. I'd say in Manorville you are a tough call. Just to your east is more likely. In manorville itself, especially the northern half might just hang on to all snow. However any mixing i think In manorville if it does occur, would be brief.

oldtimer wrote:Thanks Frank   Great right up and map   Tell me will the high pressure hold for duration?

jmanley32 wrote:Nice map Frank, 12-18 ill take it in a hot minute, id like to see that 18-24 come over the hudson in your next map plz lol. but serious question, why do you think that band stops just west of the hudson? Also when you say power outages in parts of the state does that include NYC area? My wife wants to know if we could lose power, im thinking its possible but not as likely as along LI or coastal jersey. 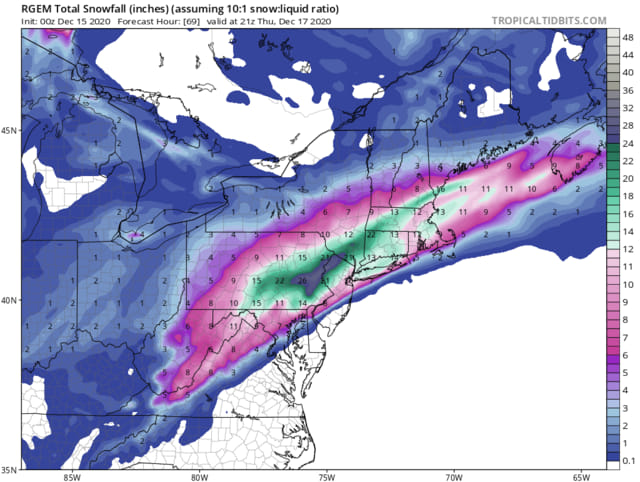 Franks map reflects that pretty well, especially the area of 18-24. Still thinking most will see closer to 18 than 12 except well south and on eastern tip LI, I dunno something tells me this may still over perform and ramp up even more on closer model runs like tomorrow night. HRDPS I think it is always goes nuts.

nice map Frank i'm in Hempstead so were gonna get slammed....long overdue I'll take it

Omg, lol. If this happened tomorrow night, we’d all be pouring a stiff drink. 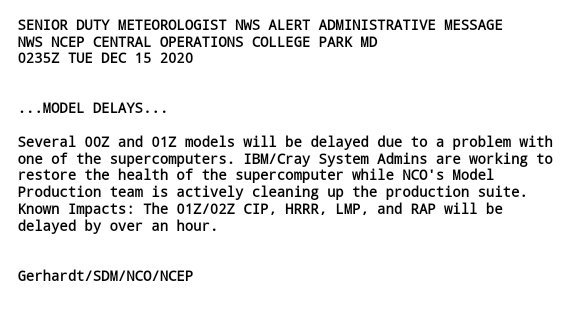 Great write up Frank ! Love your map , do you think she’s still snowing at 7am Thursday?

0z GFS continues with GODZILLA amounts for the metro area

Thank you for the write up Frank! trying not to get too excited

yikes, GFS has quite the cut off. Either this model is going to score big time or it's just being stubborn 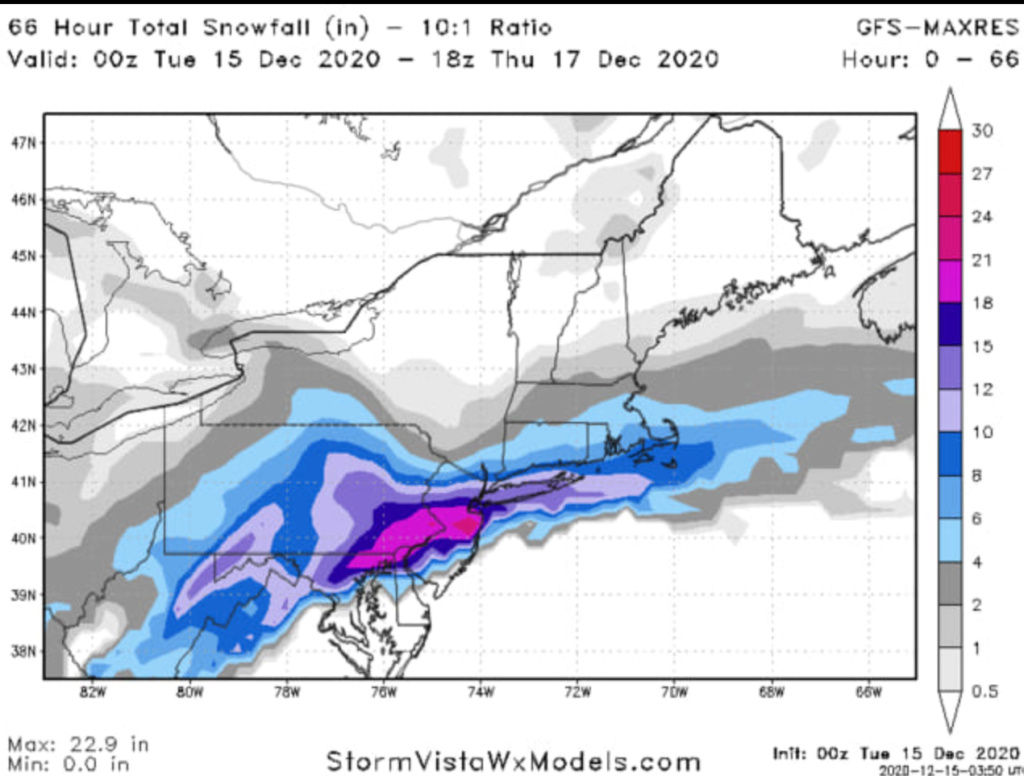 aiannone wrote:yikes, GFS has quite the cut off. Either this model is going to score big time or it's just being stubborn

ya and that heaviest area is wayy south of franks map, the other models have in more line with his map. GFS may just be OTL. On this map NYC and LI see more snow than southern westchester, and northern NJ, not happening.

So much for the GFS and EURO meeting in the middle

The GFS is not a good model. It’s just not, given its waffling buffoonery. (And btw, its 00z run still shows over a foot IMBY so this isn’t biased).

The Euro has remained decently consistent, as has Canada’s models. I’m betting on consistency.

Last few runs of the GFS for the same time stamp. In the grand scheme of it all, not a lot of change from this model. At this point it can’t be discounted, and many in the meteorological community are beginning to believe it