Irish wrote:TWC just adjusted snow totals for my area in CNJ from 12-18 down to 7-12.  Still a very nice storm but the move N&W seems to be happening. Time will tell...

18z NAM so far west it's in the chesapeake

aiannone wrote:18z NAM so far west it's in the chesapeake

Whats with the LP being over the water then suddenly jumping to the west in chesapeake, lost of sleet for NYC metro even NJ.

I still think this plays some games...we will see. I guess wait and see what tonights runs do and go from there! 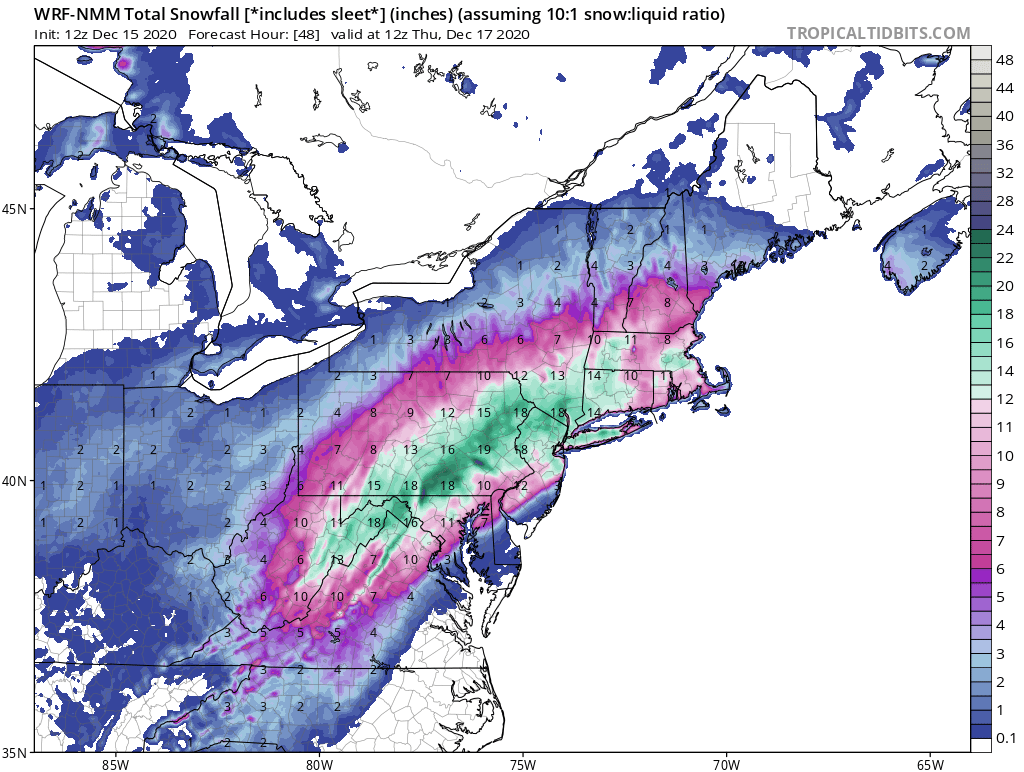 Gimme my 3-5” please (please!!)  and I hope the rest of the board really gets to share in them riches!!!

If there was ever an award for the best attitude on a weather board SENJsnowman wins in a landslide. 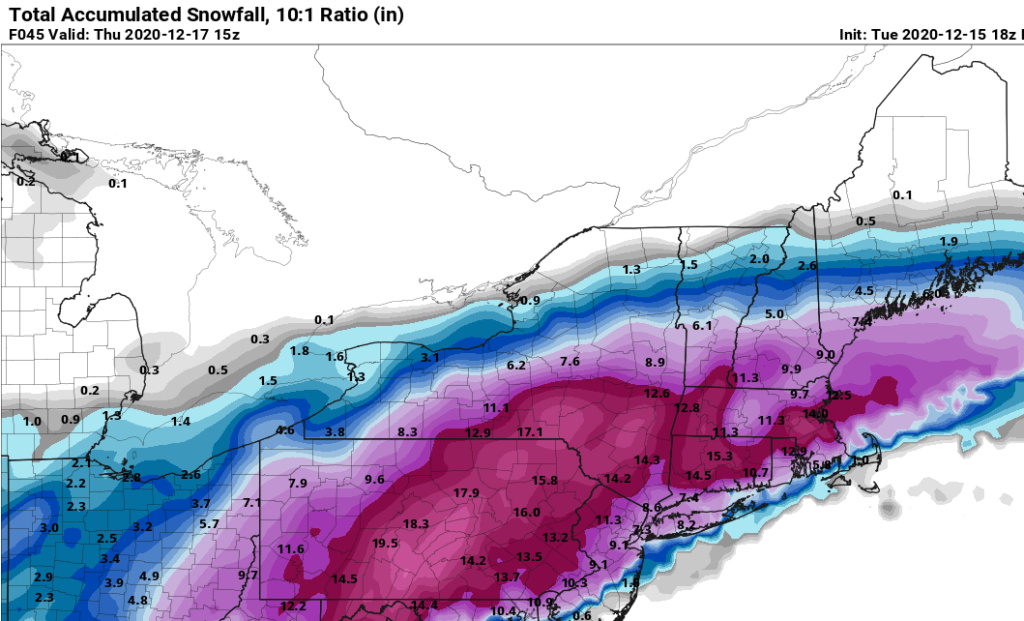 Gimme my 3-5” please (please!!)  and I hope the rest of the board really gets to share in them riches!!!

If there was ever an award for the best attitude on a weather board SENJsnowman wins in a landslide.

18z Hi-Res NAM has a nice thump, then sleet, then dryslot 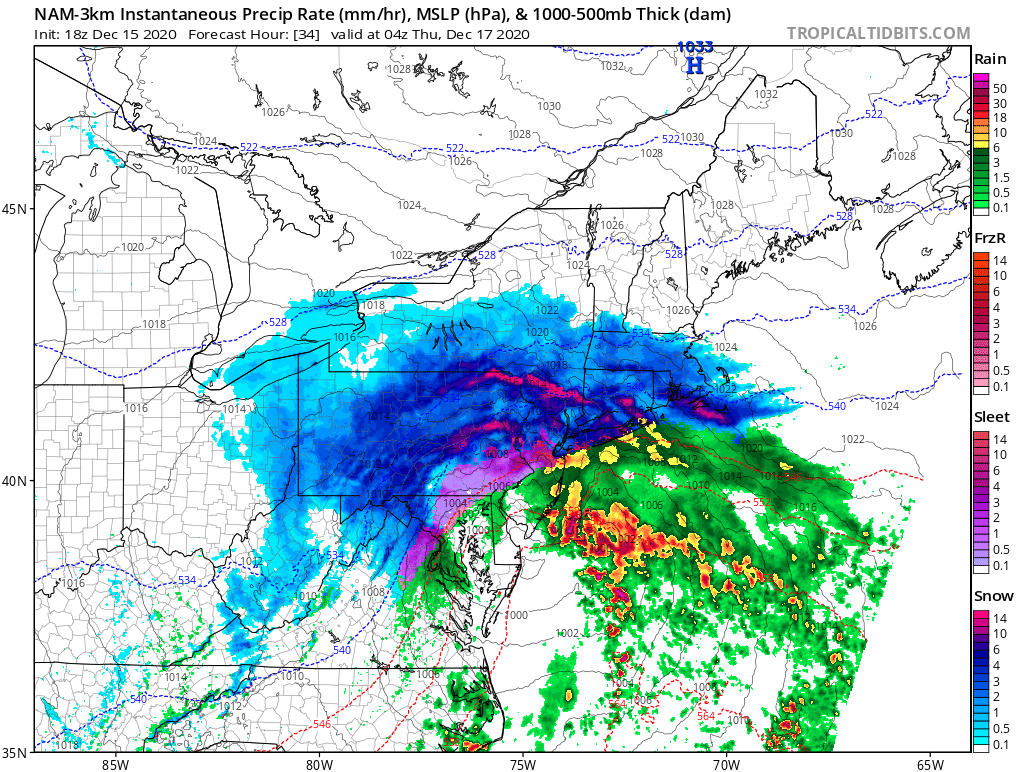 I actually did not mind the 18z NAM

As many have mentioned, while we’ve been watching the shortwave amplitude over the US, the N Atlantic ULL decided to leave the party out the back door. Watch this 12-run GEFS trend and notice how it trends slowly and steadily further east. pic.twitter.com/xuqXXqq7Gk

Frank_Wx wrote:I actually did not mind the 18z NAM

Yes, still issues with dry slotting and mixing but aloft there were some slight positives

Closed off to early for us which is why we dry slotted but LP was less tucked, kept us colder for the front end thump. didnt really warm until the dry slot

Upton's 1:15 PM discussion. Don't be surprised to see a blizzard warning somewhere. Obviously mixing is probably what could stop them from issuing it.

SHORT TERM /6 PM THIS EVENING THROUGH THURSDAY/...
As the high pressure shifts east tonight, winds shift out of
the N and NE. Skies will become progressively cloudier through
the night as high cirrus eventually overtake the area. Low
temperatures will be quite chilly, generally in the teens and
low 20s (though NYC may be in the middle to upper 20s). There
may even be some isolated single digit readings in the outlying
areas.

Concerning the major winter storm expected to begin Wednesday
afternoon, not a lot was changed with this update.

Models have been in fairly good agreement on the development of
a surface low pressure along the Mid-Atlantic coast on
Wednesday with the potential for significant impacts to the CWA
from Wednesday afternoon through Thursday in the form of a major
winter storm, but with subtle differences that may affect the
forecast especially closer to the coast.

A strong blocking high to the north will provide cold/dry air
initially. A mid level shortwave trough rounds the base of a
long wave trough over the Tennessee Valley Wednesday morning,
allowing the longwave trough to become slightly negatively
tilted. This combined with an intensifying jet streak to the
north will allow for the rapid intensification of a low pressure
system off of the Carolina coast, positioned in the right
entrance region of the upper level jet streak.

The surface low will move NNE along the Mid Atlantic coastline
and then eastward off the Delmarva Wednesday night into
Thursday. Given the strong Arctic high to the north with
surface and low level temperatures at or below freezing, most
of the area should see an all snow event. The last several runs
of the NAM put this somewhat into doubt with a more amplified
upper trough and stronger mid level jet bringing in warmer air
aloft, also a dry slot late Wed night. With the ECMWF actually
trending colder and remaining slower, did not entirely buy this
scenario except for the lower boroughs of NYC and the south
shore/east end of Long Island.

Winds will increase out of the NE Wednesday evening and
Thursday morning as the tightening pressure gradient will allow
for sustained winds of 25-35 mph possible along the coastline
and gusts 40-50 mph for a time, which may cause close to
blizzard conditions for some.

The main change made with this update was trying to identify the
best potential for any mixing to occur. Though the Twin Forks
likely will mix with rain or sleet at some point, the warm nose
at 850mb was fairly minimal, becoming basically isothermal for a
few hours. This would occur in the middle of the storm so heavy
snow will have already occurred resulting in at least 3-6" of
snow. Obviously the exact intensity of the precipitation and the
ultimate track of the low play a significant role in
determining the strength of the warm nose at 850mb and ultimate
duration and potential to mix or change over to rain, so trends
in models regarding precipitation types will be monitored and
updated accordingly.

There is still some question as to how quickly the low will
pull out late Wed night into Thu. Sided more with ECMWF idea of
light snow in the morning, gradually tapering off from W to E
through the day.

Warnings are starting to pop up. NWS as of now is still holding on strong to 12-18 (I live on the west side of Manhattan) with their forecast update. TWC is still riding all snow.

These are the times where you gotta love (or hate) the 4th quarter of a close game. I Was up by 10 when it started but now up only a field goal and they're driving down the field approaching the 2 min warning. 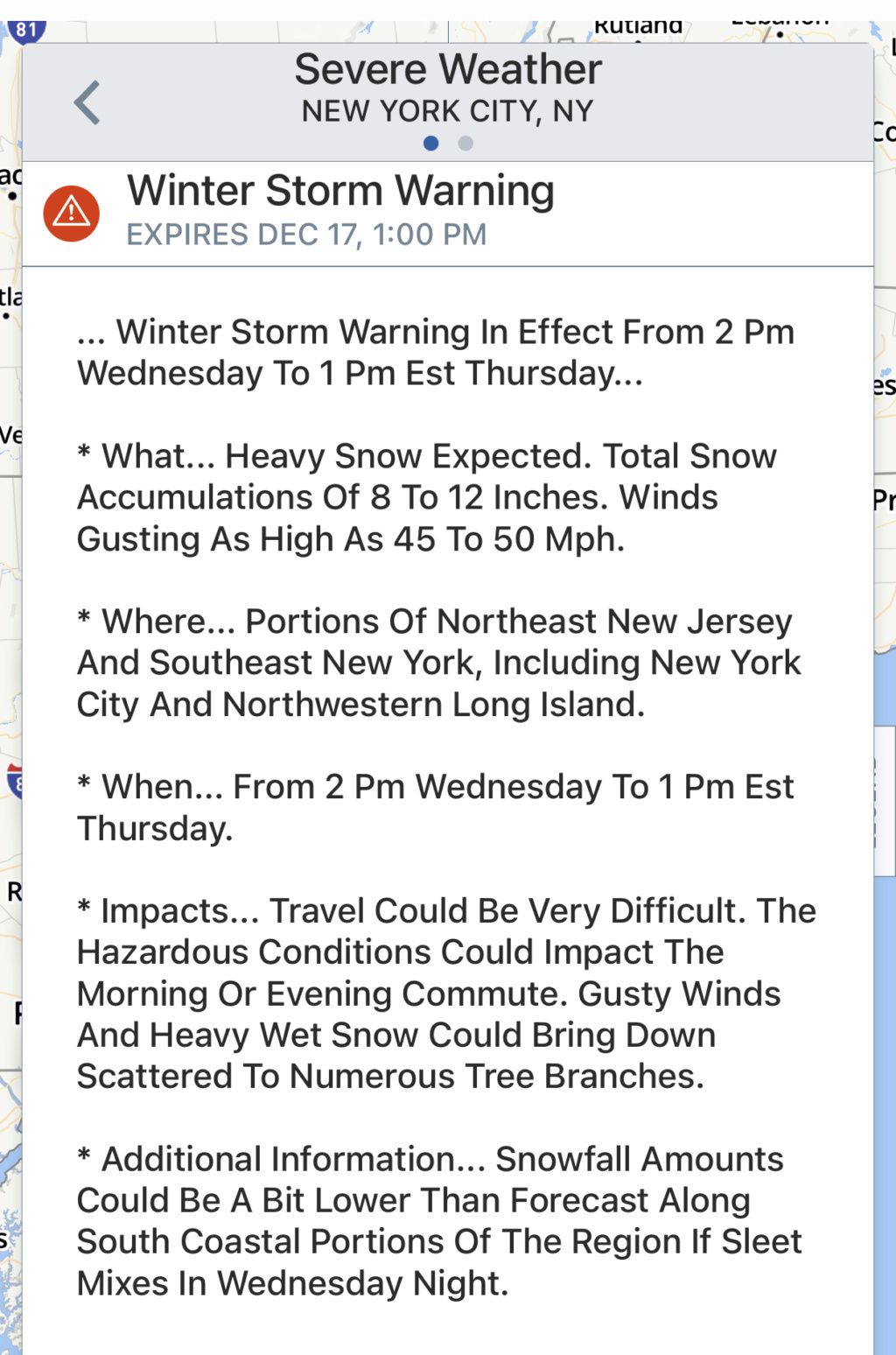 * IMPACTS...Travel could be very difficult to impossible. The
hazardous conditions could impact the morning or evening
commute. Gusty winds could bring down tree branches.

Nws for my area

* WHAT...Heavy snow expected. Total snow accumulations of 12 to 16
inches. Winds gusting as high as 45 mph along the coast. 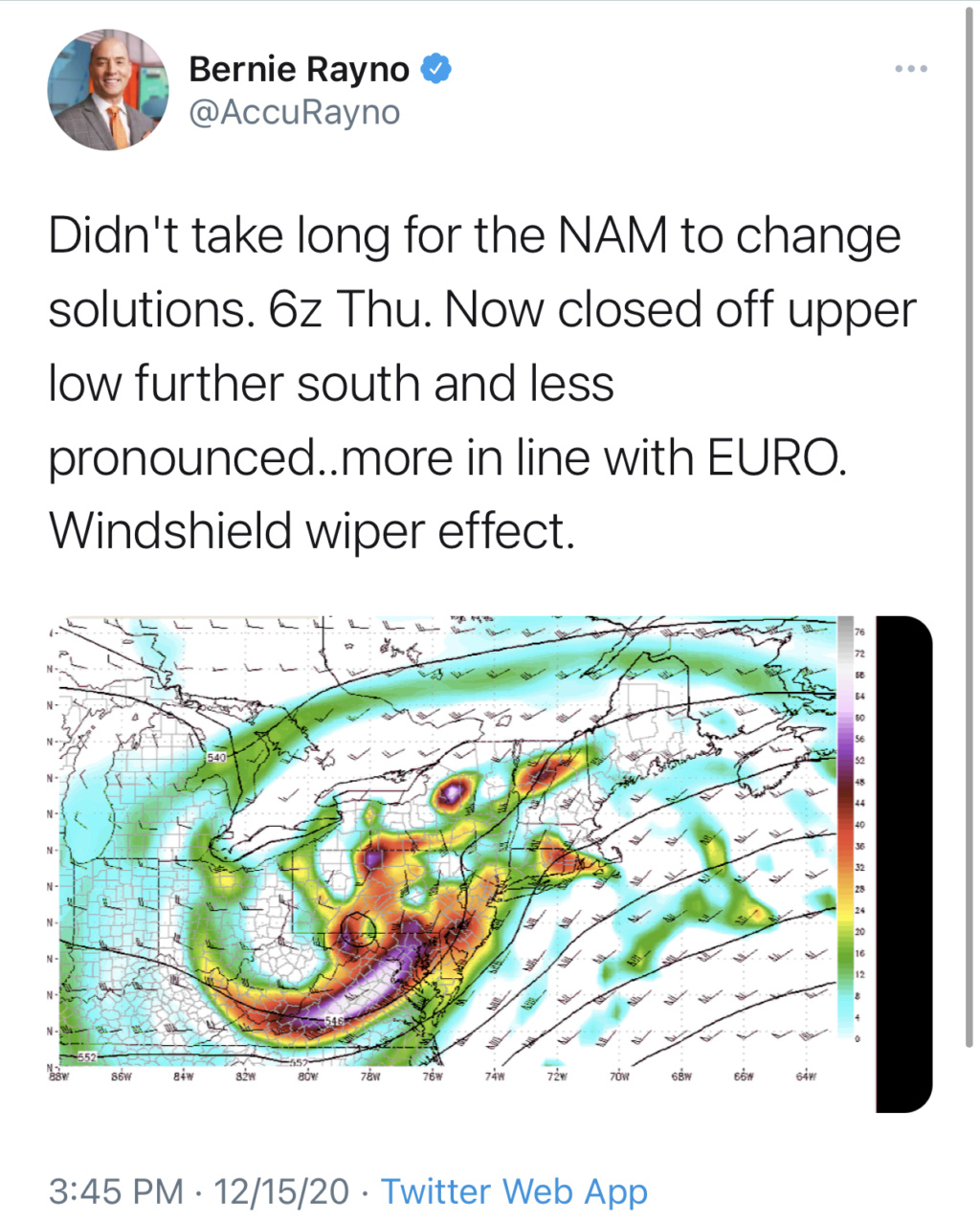 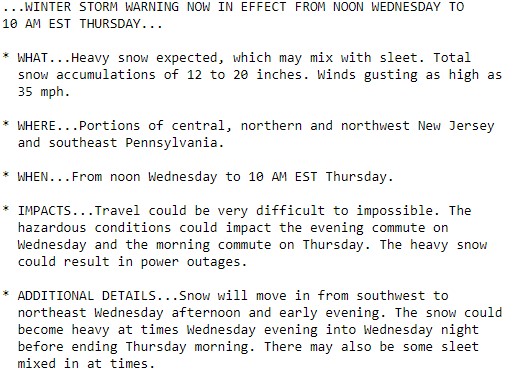 Yeah John they're not buying the short-range models. 7 p.m. tomorrow night per nam dew points below zero in the Hudson Valley and most of Connecticut and in the teens where we live that's not being overcome very easily I don't care how strong the low pressure is. This is an easy 6 in front end thump and I mean easy could easily get to a foot before any dry slot gets in here and then more snows on the back end good call by them

frank 638 wrote:Mayor Deblasio is on he’s mentioning the storm could be really bad the city is probably getting a foot I’m surprised because I thought There’s going to be mixing especially for south of queens and Brooklyn

He also said there will be no more snow days lol, well if your remote thats kinda understandable.

frank 638 wrote:Mayor Deblasio is on he’s mentioning the storm could be really bad the city is probably getting a foot I’m surprised because I thought There’s going to be mixing especially for south of queens and Brooklyn

He also said there will be no more snow days lol, well if your remote thats kinda understandable. 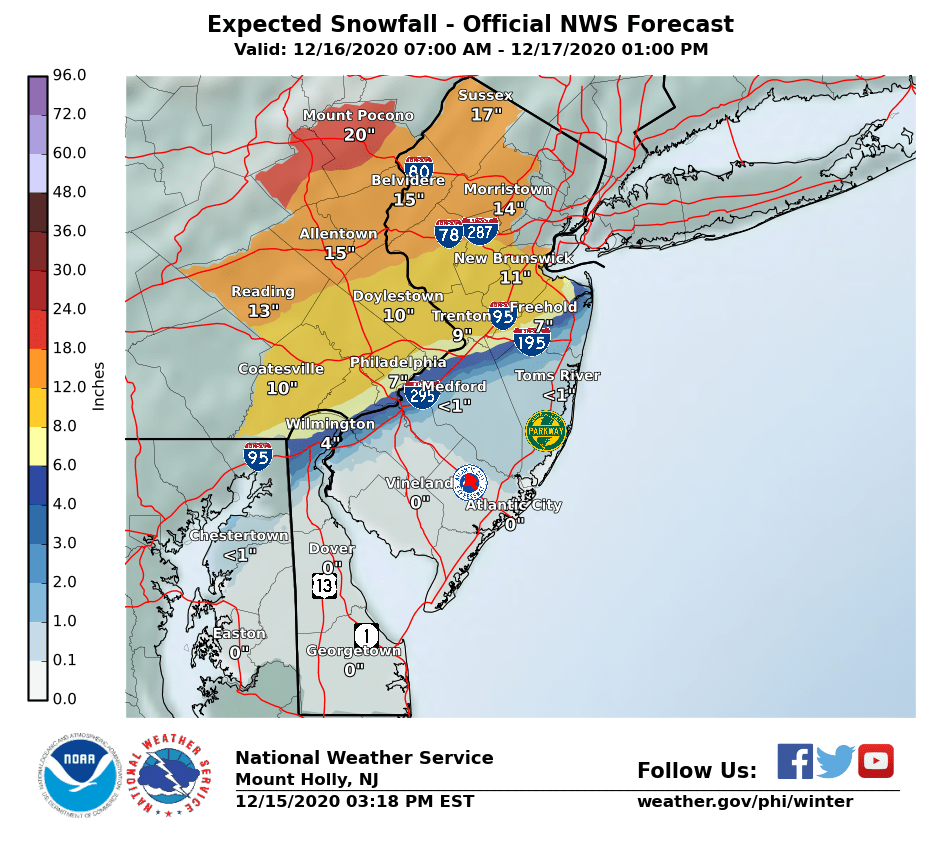 that now matches with Upton side. better sensical puzzle.